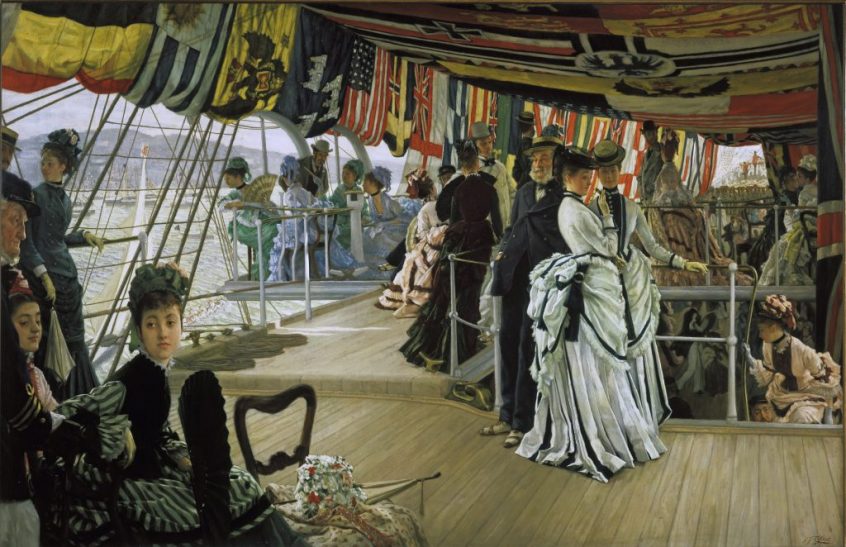 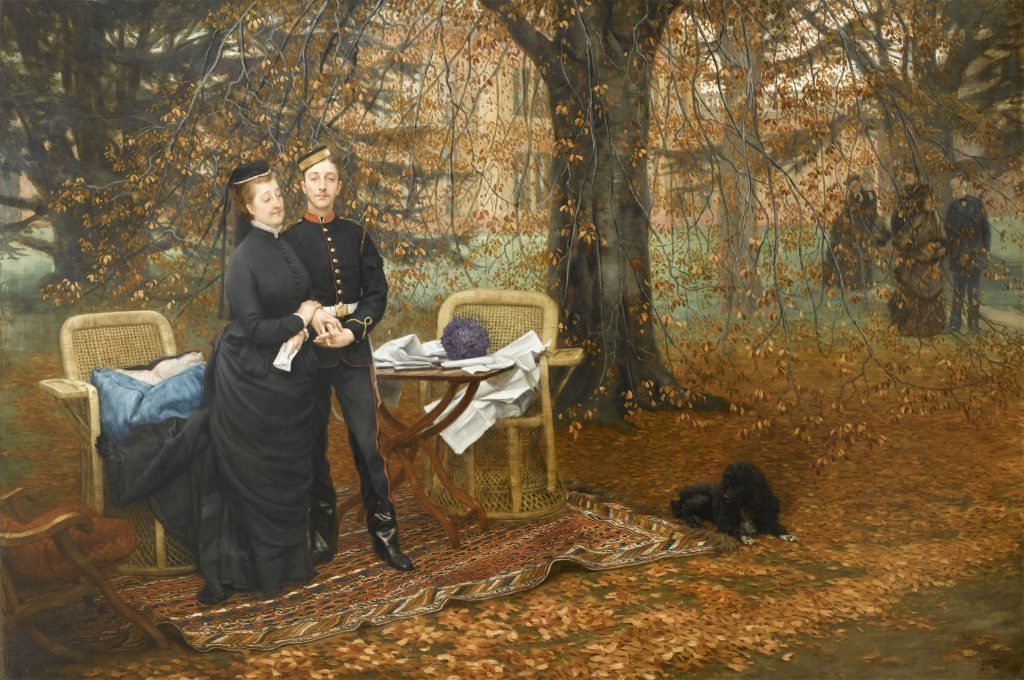 Some of you might have already seen this exhibition in London but if you haven’t, please rush to the Petit Palais to discover the variety and lush of “Impressionists in London, French artists in exile, 1870-1904″. It starts with a very dark room of paintings of Hôtel de Ville and Palais des Tuileries destroyed by the fire of the Commune in 1871, and takes us on a ferry to London where some artists had fled with the Emperor and his family and others like Carpeaux were exiled by the Communards. The mix of sculptures and paintings is perfect and one goes from discovery to discovery with a whole room devoted to James Tissot. 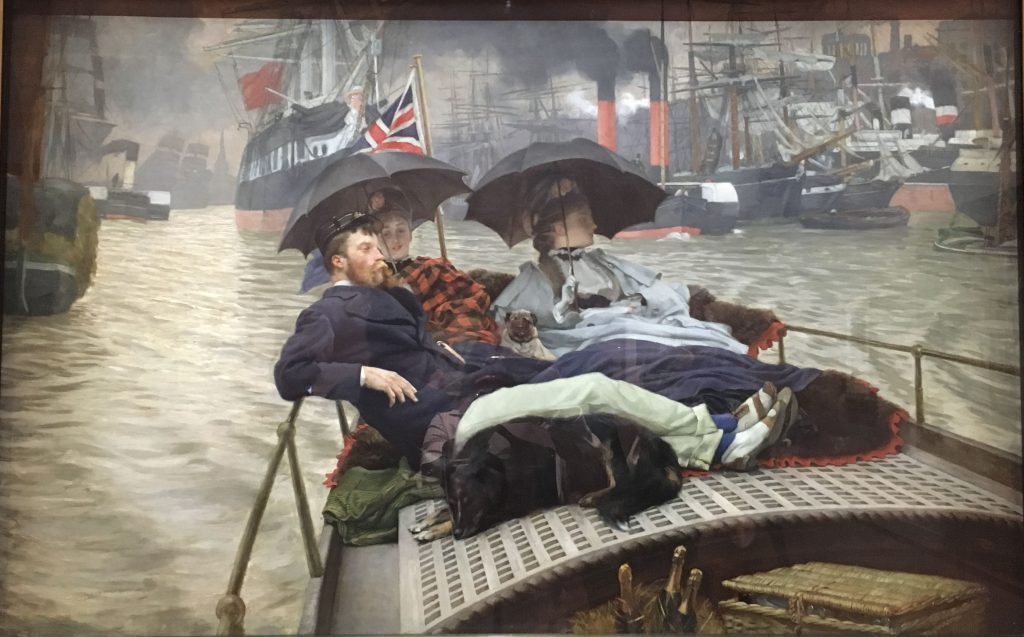 James Tissot, “On the Tames”, ca 1876, the Hepworth Wakerfield

The artists who fled the to London in 1870 did not all come from the same background but as refugees, they formed a tight knit community. Monet, Pissaro, Sisley, Carpeaux, his revolutionary pupil Dalou and Rodin, met Alma-Tadema, Whistler, Burne Jones and Watts and showed at the Paul Durand-Ruel gallery on New Bond Street. 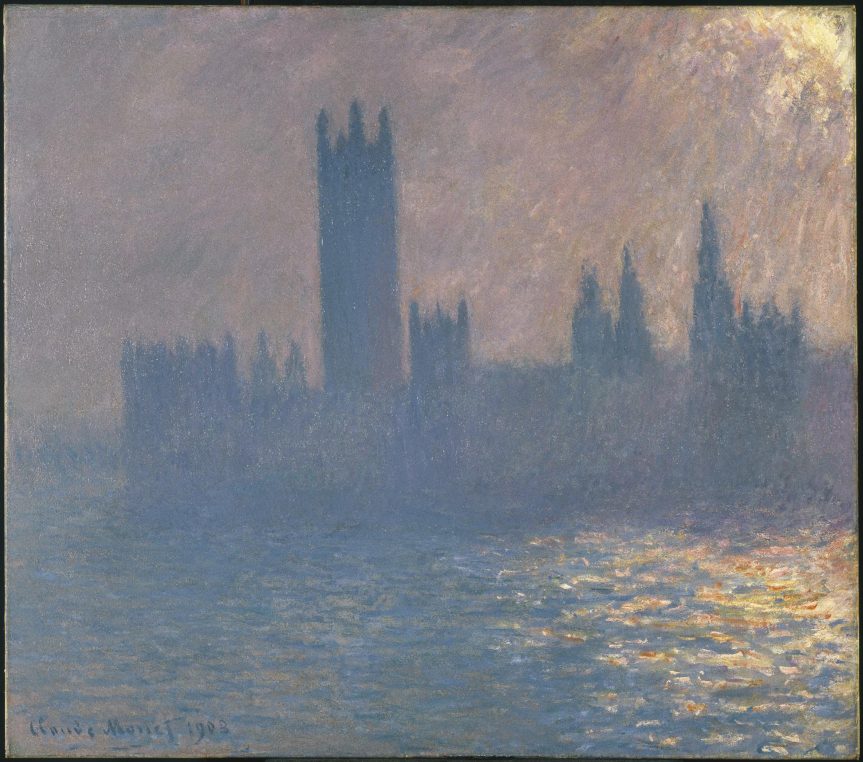 The British empire is at the height of its power and Tissot like Legros establish themselves very fast. I had never seen an Alphonse Legros painting and his portraits of Rodin, Burne Jones and his religious scenes are a nice contrast to the Impressionists gardens and water scenes.  He attracted private collectors whom he met through Rossetti and taught at the Slade School of Fine arts in French! He had never learnt English. Alfred Sisley, whose house in Bougival was seized by Prussian soldiers in 1870, left for London. HIs parents were English and he has already studied there in 1853. He paid for his trip with the Molesey Weir painting. 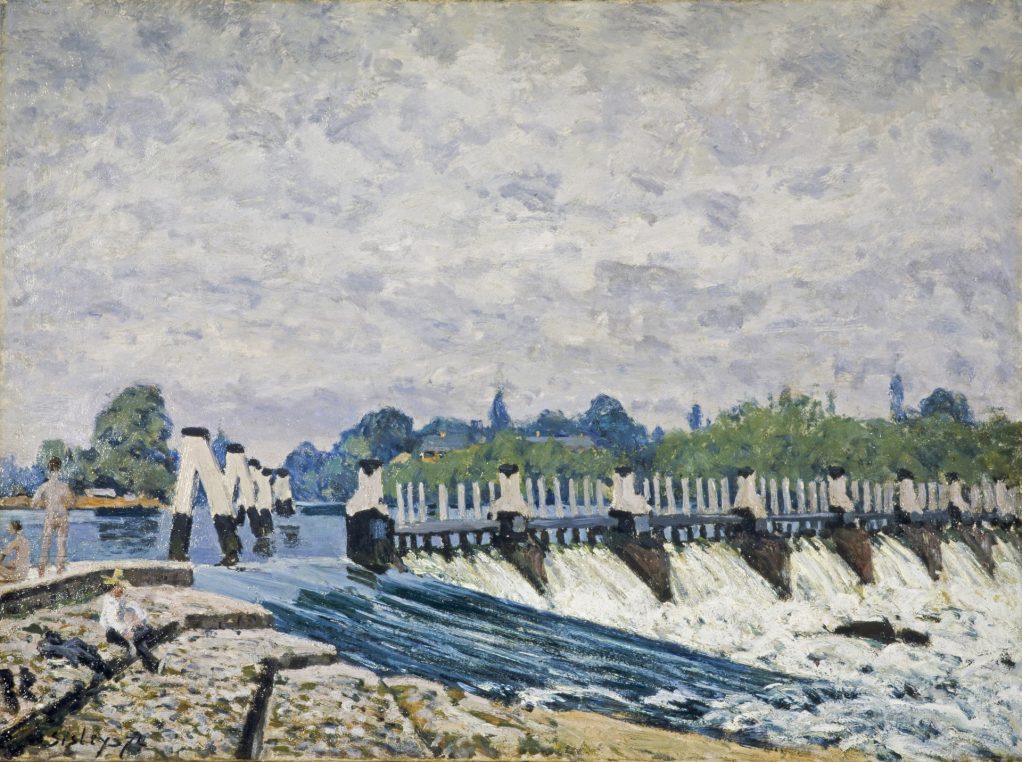 Claude Monet gets on a boat in Le Havre in September 1870 but leaves discouraged a year later because no one understands his paintings. He will come back in 1900 and magically paint the Parliament on the Thames in different versions and over three winters. There are five of his chefs d’oeuvre in one of the last rooms of the show which came from Chicago, New York, Le Havre and London.  He used to paint from 4 pm to night and had established a studio at the Savoy. Pissarro cannot get an exhibition either but he perseveres and paints Kew gardens extensively. 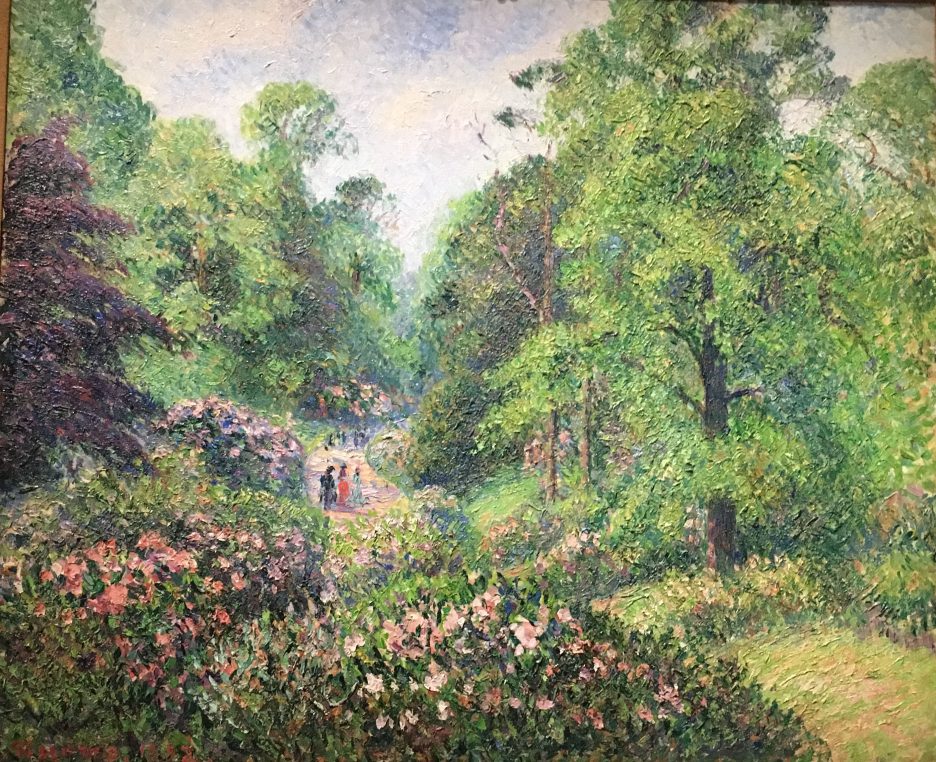 James Tissot who anglicized his first name of Jacques-Joseph into James, joins the Arts Club on Hanover Street and reproduces meticulously the high society’s salons, fashion and boating habits. His “Too early” painting of a party just starting with the lady of the house giving her last orders to the band and a few early guests not knowing what to do, is fabulous. It usually hangs in the Guildhall art gallery in London. And so is “Hush” the concert scene where violinist Wilhelmina Neruda plays in his arts club. He also endlessly painted the harbor with scenes on a ship for he was born in Nantes and kept a fascination for the sea.

He came back to Paris in 1882 after his companion, Kathleen Newton’s death. The room with Tissot’s frivolous paintings is immediately next to Jules Dalou‘s dark political and social sculptures.  Exiled by the Commune in 1871, he taught in two art schools where he developed his realistic style but will go back to Paris in 1879 after being pardoned by the new government. 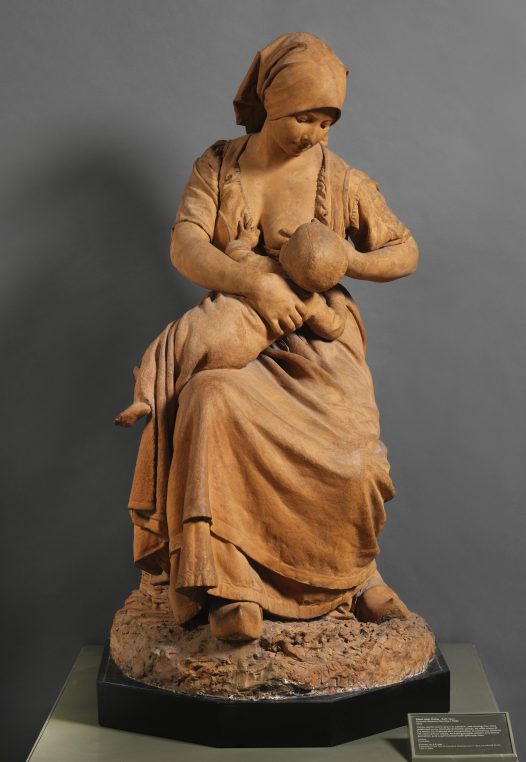 The scenography of the show by Maciej Fiszer‘s studio is once again very successful. Pale pink and purple colors for Tissot, dark English green for the sculpture gallery where Carpeaux reigns with a great loan “Flore”, 1873, from the Gulbenkian foundation, light celadon for Sisley and the circular wall for Monet’s Parliaments. The walk in the exhibition is very pleasant and I found myself going back a few times to see the Carpeaux and the Tissot. 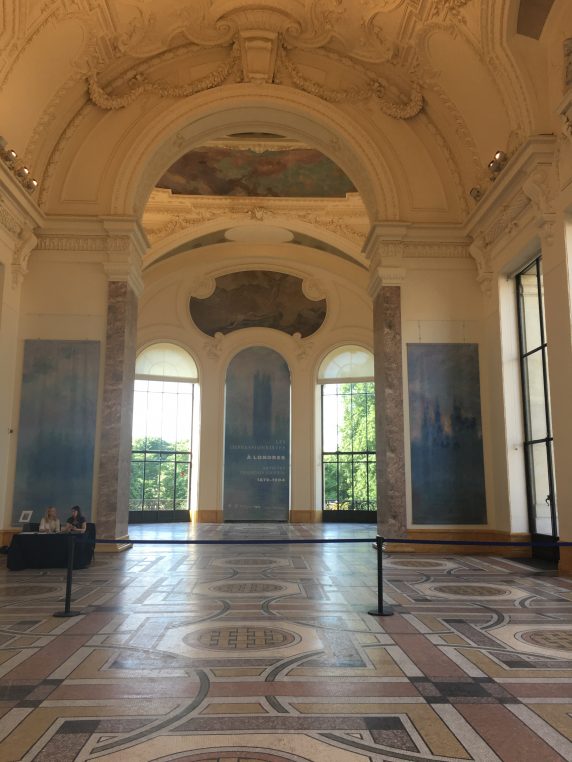 The main Hall of Petit Palais

It is particularly interesting to see how Christophe Leribault and his team managed to portray the consequences of the 1870 war on the French and English artistic scene. One can stop and listen to taped descriptions of a musical evening and look on a digital map of London, where every artist lived at the time. And thanks to many loans from the US and Great Britain, this exhibition is as fascinating as the previous “Dutch painters in Paris”. 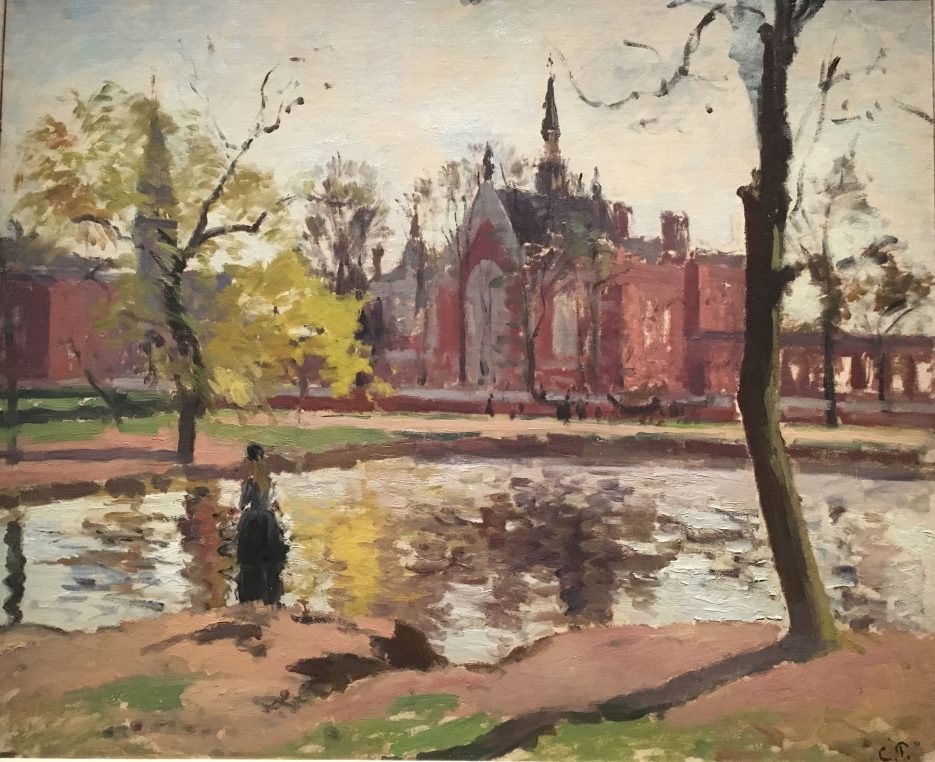 Until October 14 at Petit Palais. And on July 6, 13 and 20, there will be exceptional free concerts in the garden of the Young musical stage in England,  “Brit Sessions” with Joyce Jonathan, Paperface and Fyfe, produced with the British Embassy.

2 Comments on “French artists in exile in London, at Petit Palais”