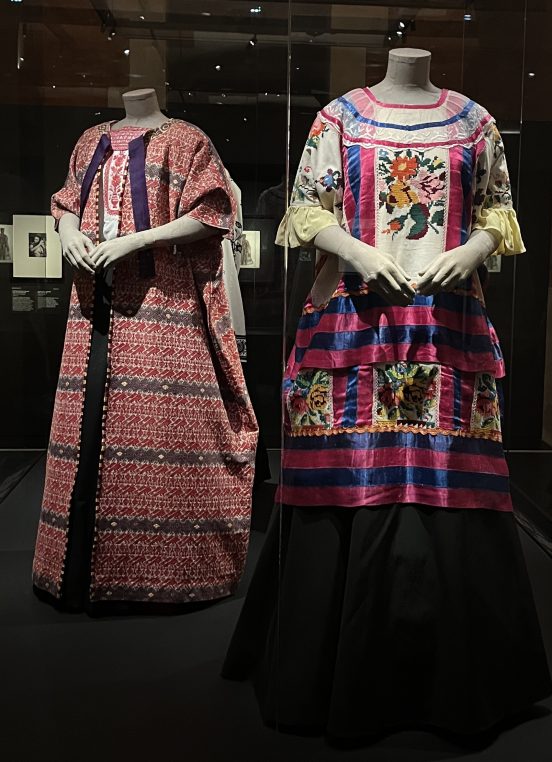 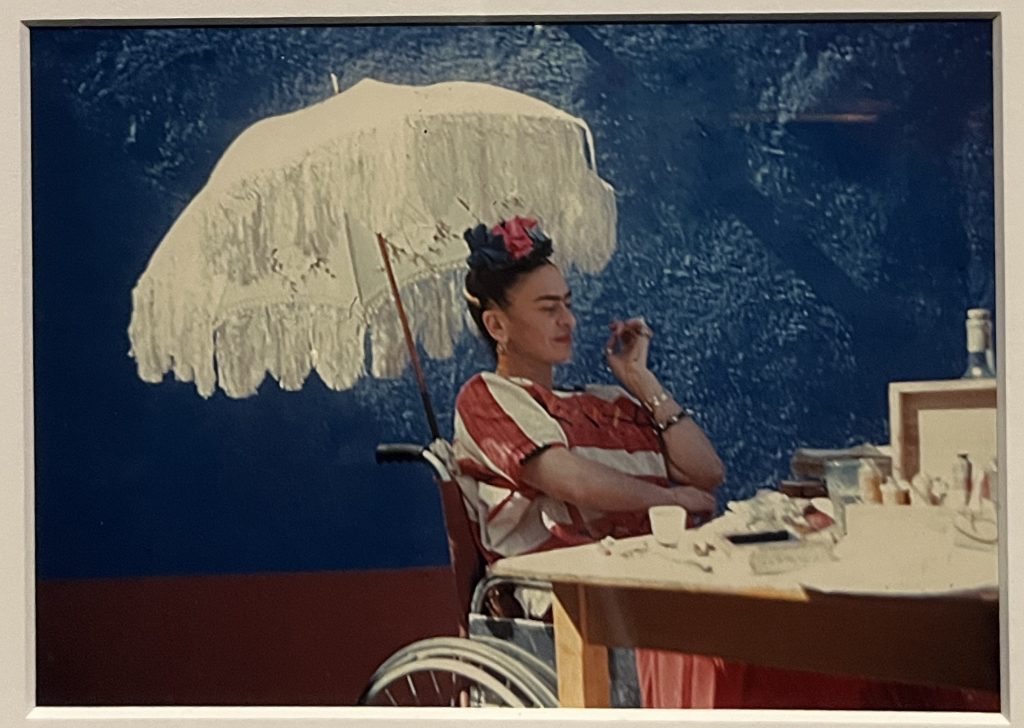 “Beyond Appearances” is how the brilliant Mexican artist Frida Kahlo (1907-1954), is presented in the bottom floor, curved galleries at Palais Galliera until March 5, 2023 and the 200 pieces flown in from Casa Azul in Mexico City are really magical at reviving her dramatic life. These personal effects, jewelry, dresses, medicine, make up bottles, family pictures, were placed under seal when she died by her husband, Diego Rivera, and were not revealed until fifty years later. On the first floor, a group of fun and glamorous contemporary dresses, bring a more optimistic look to the visitor. And Circe Henestrosa, the Mexican curator of the show seemed extremely happy with her Spanish Basque colleague Miren Arzalluz, the director of Palais Galliera since 2018. 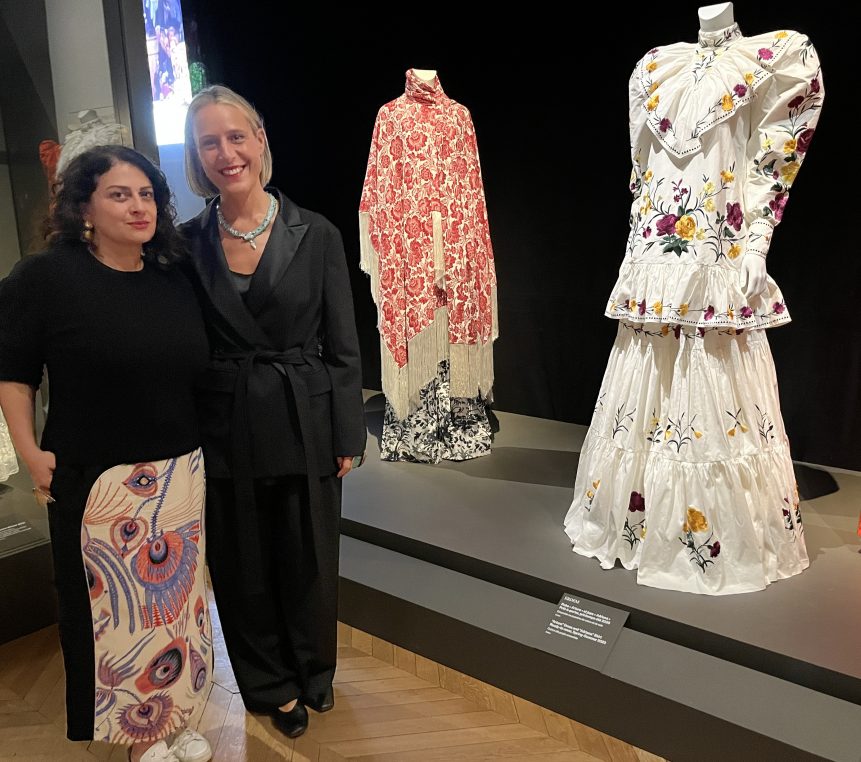 Circe Henestrosa, fashion curator and Miren Arzalluz, director of the museum, with two dresses by ERDEM inspired by Frida Kahlo

The reason the exhibition is fascinating is that we enter the artist’s private sphere. Her collection of dresses was inspired by her mother, who came from a Spanish -Indigenous family from Oaxaca. Her father was a German emigrant and a leading government photographer, who took numerous shots of his daughter at a young age. So she was accustomed to being the center of attention. But Frida had a tough childhood. She contracted poliomyelitis at 6, and as a result, invented an imaginary friend who would become her double in painting. At 18, she was involved in a serious tram accident that left her bedridden for months. This is when she began to paint instead of going to medical school.

“I have had two serious accidents in my life. One was being hit by a tram. The other is Diego”. Diego Rivera, whom she married in 1929 when he was already internationally renowned. She was raised in Casa Azul, the blue house in which she died. In her lifetime, it was already a cultural center where personalities such as Trotsky or André Breton flocked when they arrived in Mexico City. And because of her physical disability she recreated her world there. The exhibition has different rooms showing her personal photographs from childhood, her numerous Pre Columbian jade jewelry and her corsets of course, which were so much part of her suffering and of her art. A large space is devoted to her collection of dresses from Tehuantepec which are colorful and technically beautiful.. 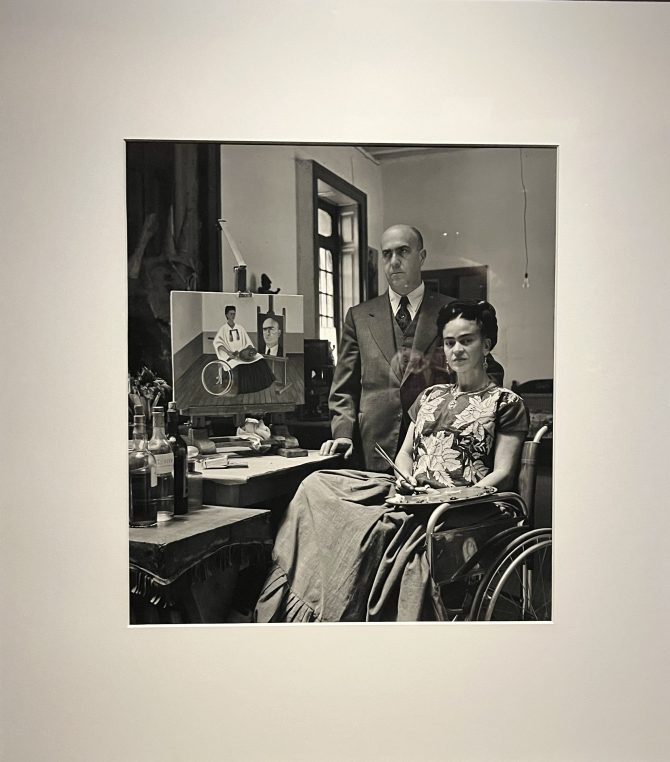 Frida Kahlo and Dr Farill, 1951, private collection. Her relationship to her doctors was of huge importance to her.

A whole area is devoted to the resplandor, the headdress and collar worn by Tehuana women for special occasions. An excerpt of a film by Serguei Eisenstein “Que Viva Mexico” shows these women wearing the resplandor in the wind. It is stunning. There is also a striking self-portrait with the same coiffe and collar from 1948. 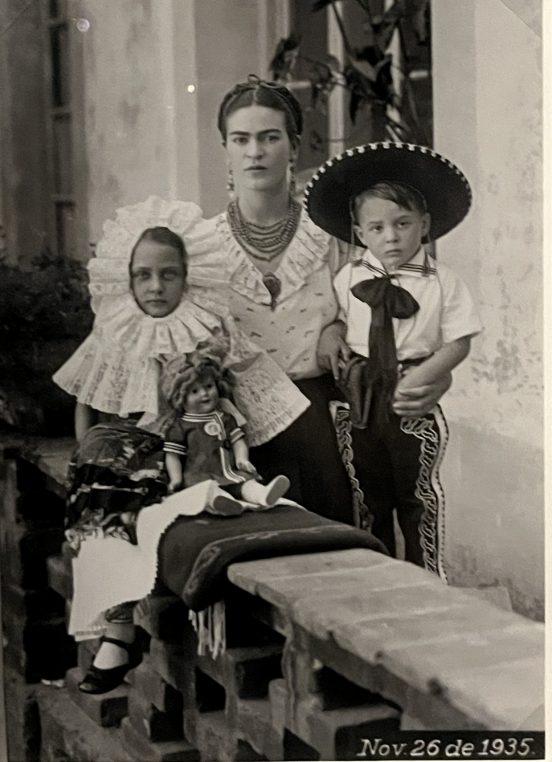 Early pictures show her dressed as a man in 1926, on family occasions, a film shot in Detroit gives an interesting take on her collaboration  with Diego Rivera when he painted his 27 large frescoes for the Ford Motor company. Frida Kahlo was a multifaceted woman with incredible strength and talent. She has been copied numerous times and the first floor of the exhibition is a happy collection of all the contemporary designers who were inspired by her. Including Comme des Garçons  who in the summer 2012 collection,  showed a dress inspired by the resplandor, and Jean Paul Gaultier of course who developed the Multi-belted corset in 1998.

I also particularly enjoyed her collection of votive paintings offering thanks to the Virgin or other Lady of Mercy. These Mexican paintings dedicated to the saints are always evocative and charming.

Do not miss this show which takes place until March 5 at Palais Galliera and enjoy lunch in the garden while the weather is still warm. For French readers, Editions Lattès is publishing “Viva Frida” by Gérard de Cortanze, a mix of her writings and paintings with reflections from the French writer.

3 Comments on “Frida Kahlo is an inspirer at Musée Galliera”