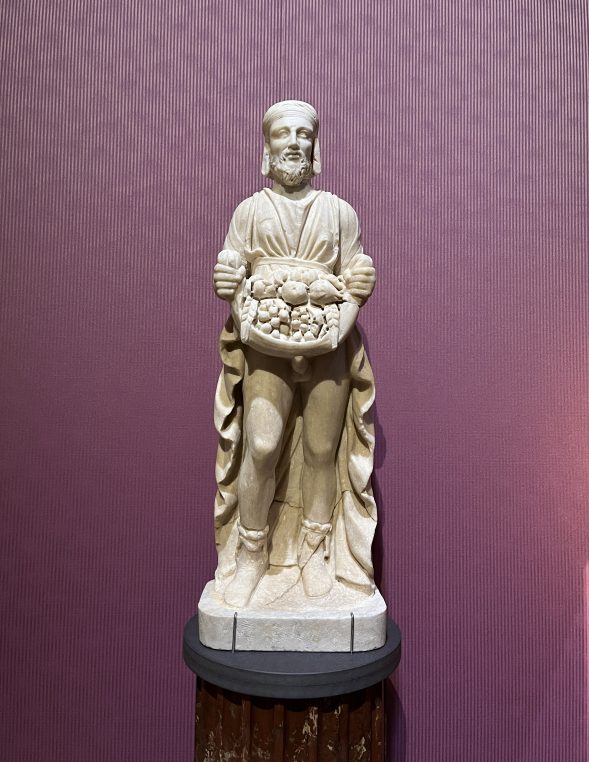 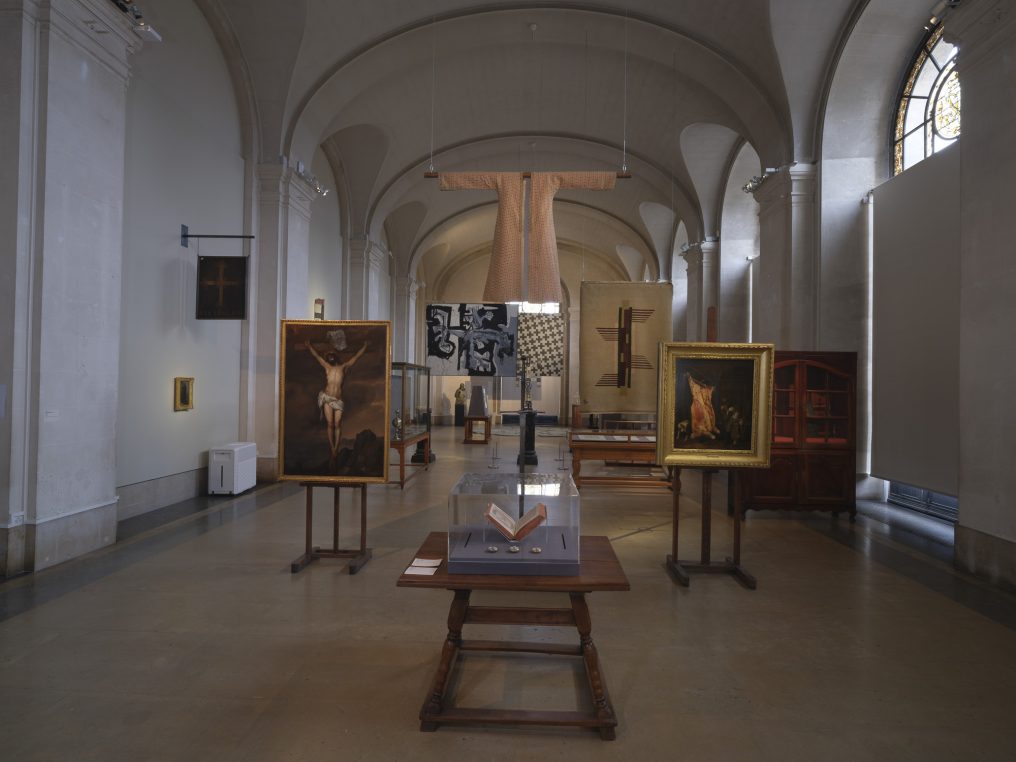 Geneva is well known for its calm and orderly Swiss manners and its Musée d’Art and Histoire, located on top of the old city, is a municipal museum which few tourists take the time to visit. Art historian and curator Jean Hubert Martin was invited by the Director of MAH, Marc Olivier Wahler, to choose anything he liked in the storage rooms, a mountain of 500 000 paintings, sculptures and objects spanning over a period of 15 000 years, and create what he enjoys most, a treasure hunt of 850 objects throughout the museum galleries. The show “Pas besoin d’un dessin” (“Draw your own conclusion”) literally means in French, “you don’t need any explanation”. It was prepared over two years and the installation took two months in the main galleries, a supreme luxury for the curators. I completely fell for it and loved discovering Ferdinand Hodler‘s multiple paintings of bearded men and mountains, musical instruments with faces and the similarities between Swiss national flags and Matisse’s costumes for a ballet. The show goes on until June 19, so you have time to plan your Swiss expedition. 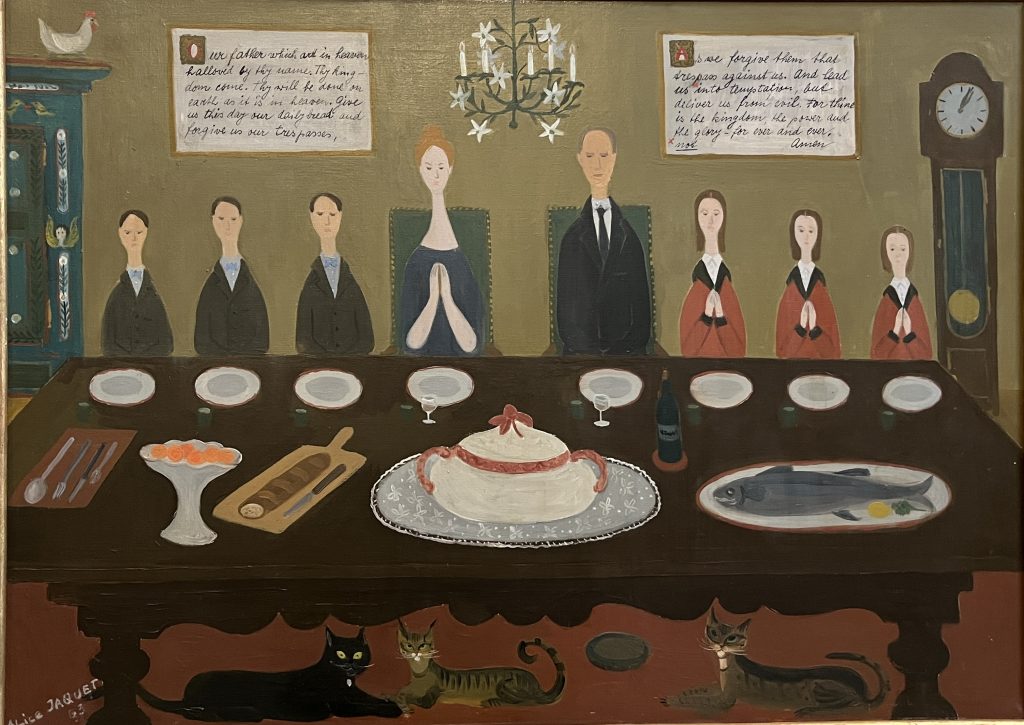 This exhibition is not about chef d’oeuvres, it’s about opening the visitor’s eye to shapes, colors, materials and making anyone who walks into the museum discover art, associations, naughty images and “rapprochements”, links, create a curiosity among neophytes. The visitor is invited to have a physical experience, and take pleasure into the show, judging with his own instinct, without any previous information and he does not need any artistic education. In his previous exhibitions at Grand Palais, “Carambolages” and “Une image peut en cacher une autre“, Jean Hubert Martin had refused to include cartels and visitors felt lost. So here, every painting is labeled but its being part of the show is independent from its celebrity. Anonymous works (there are many), are as important as Richard Long‘s or Markus Raetz‘, one of the curator’s favorite artist who is Swiss and died in 2020: as a tribute to his talent, one of his works is present in every room. One of the most intriguing painting is Jacques Laurent Agasse, (1767-1849), “La Fontaine personnifiée, (the incarnated fountain) 1837, which is presented next to the Japanese print by Utagawa Kunisada, 1853, representing an actor with a fountain around him. Agasse trained in a veterinary school and has mostly painted animals and landscapes. 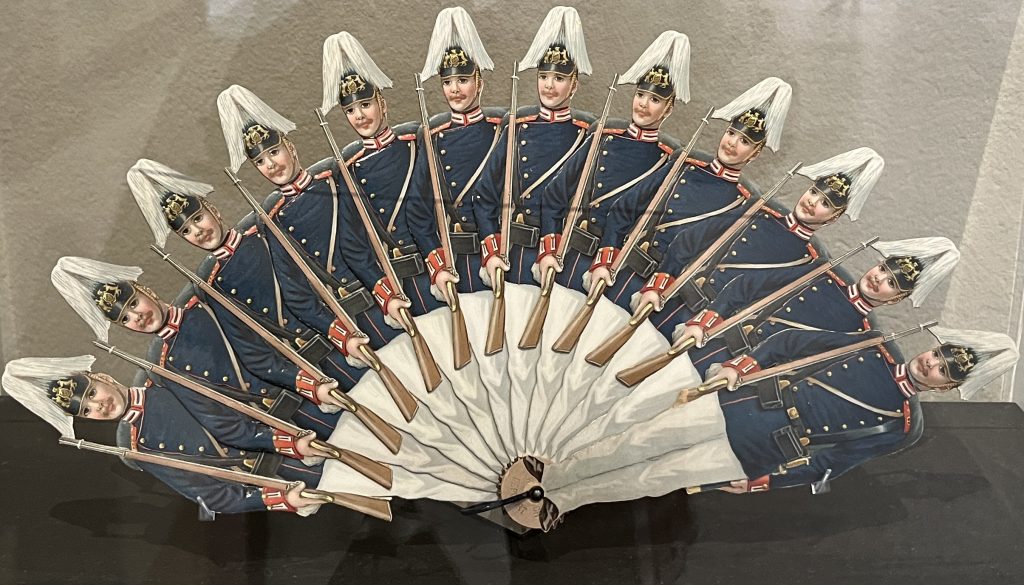 The first majestic room on the ground floor of the museum opens up with a Christ on the Cross painted in Antwerp in 1660. It is matched by a German sword from the 16 th century, an 18 th century Ottoman caftan presented as a cross and Jan Victoors‘ whole beef carcass, also hanging on a piece of wood,  is reminiscent of the crucifixion. Antonio Saura‘s “Crucifixation” is not far nor is Kazimir Malevich‘ “Suprematist Cross” from 1973. A great diversity of styles and periods! A 1967 Steel plaque by Carl André lies next to a 1530 tombstone by Amédée de la Palud. 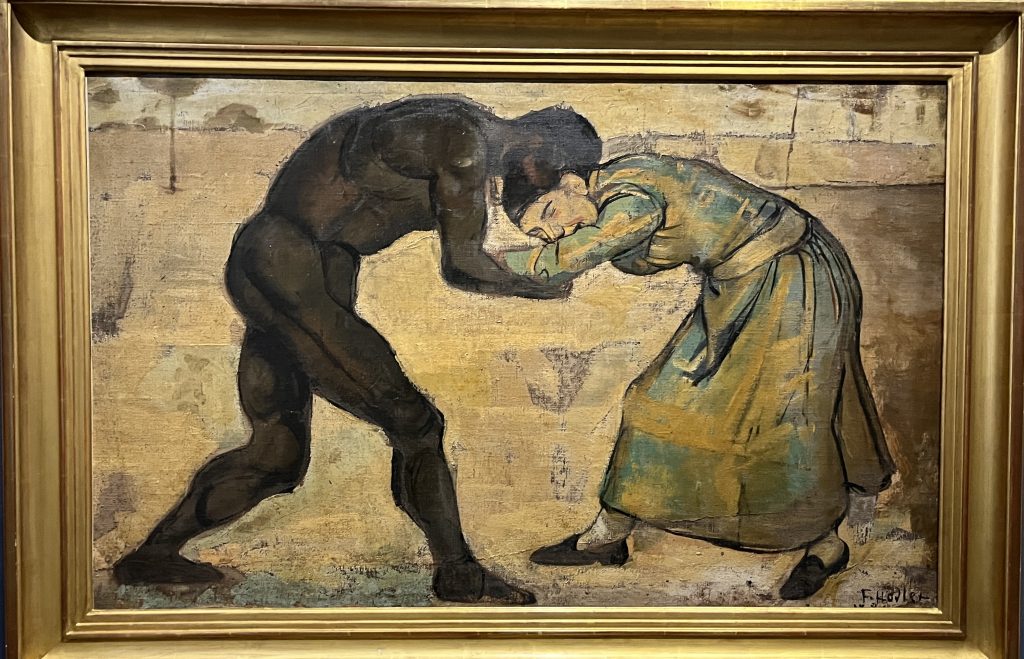 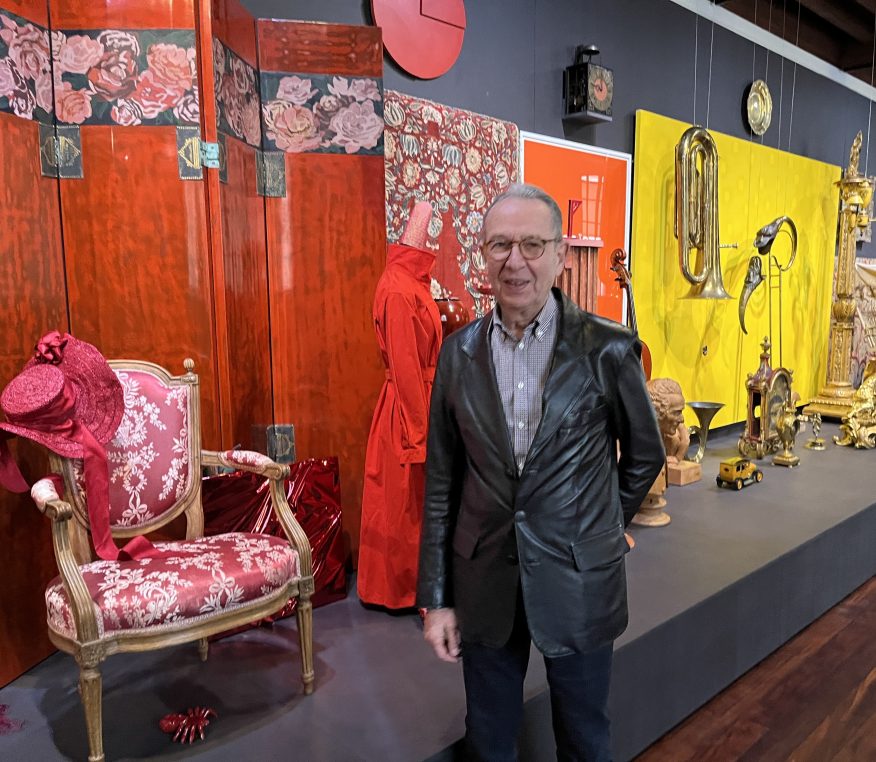 Next to these rooms is a little one lined with claret color fabric where each painting includes characters who are peeing. You have to really look up close to find them, but the accumulation is fun. Then you pass “la Charité romaine”, the sexy (or scandalous today?) portrait of a young woman feeding her starving enprisoned father with her own milk, and land in the “From Hair to Beard” room where three Ferdinand Hodler paintings compete with a Roman 2nd century marble bust of Asclepius, a bronze self portrait by Symbolist James Vibert (1929) and a severe wooden portrait of a Reformer, ca 1530. In the same section, “Bishop Maximin from Aix en Provence giving communion to Saint Marie Madeleine”, (1700-1710) is unique for the abundance of beard and long hair. 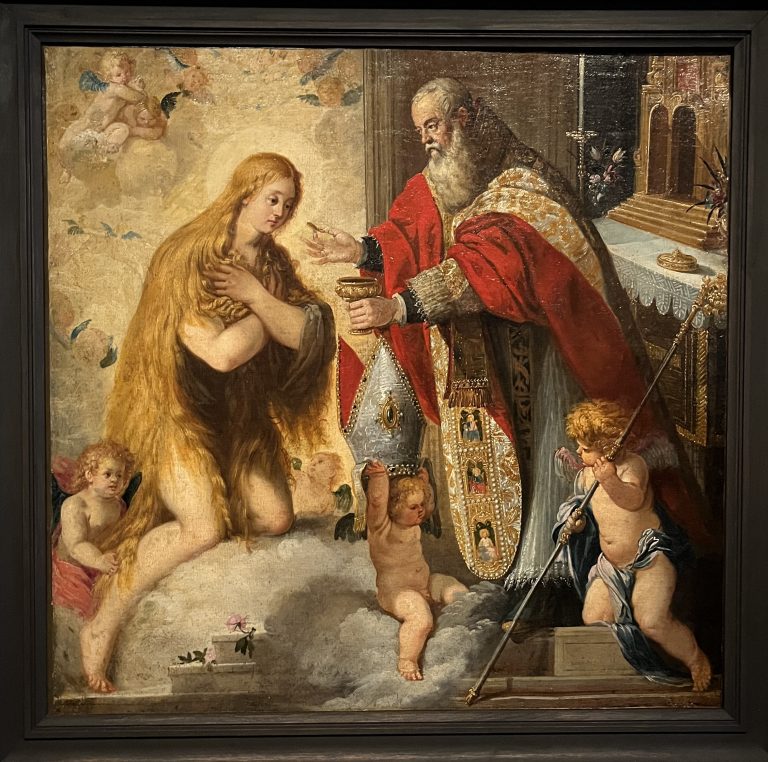 Then follows the gallery “Rich and Poor” where 18 th century furniture and lavish embroidered men’s clothes face a painting of the poor by Joseph Henri Deville. We have by now reached the old Salon du château de Cartigny with historical decors. A lovely musical instrument follows in the next room named “From Ambiguous to Enigma”, a guitar Lyra by Alexandre Parisot, with what looks like eyes and mouth, wooden chairs and an armchair where one could find the same “face” in the upholstering and a ceramic painted Egyptian vase Nagada II. 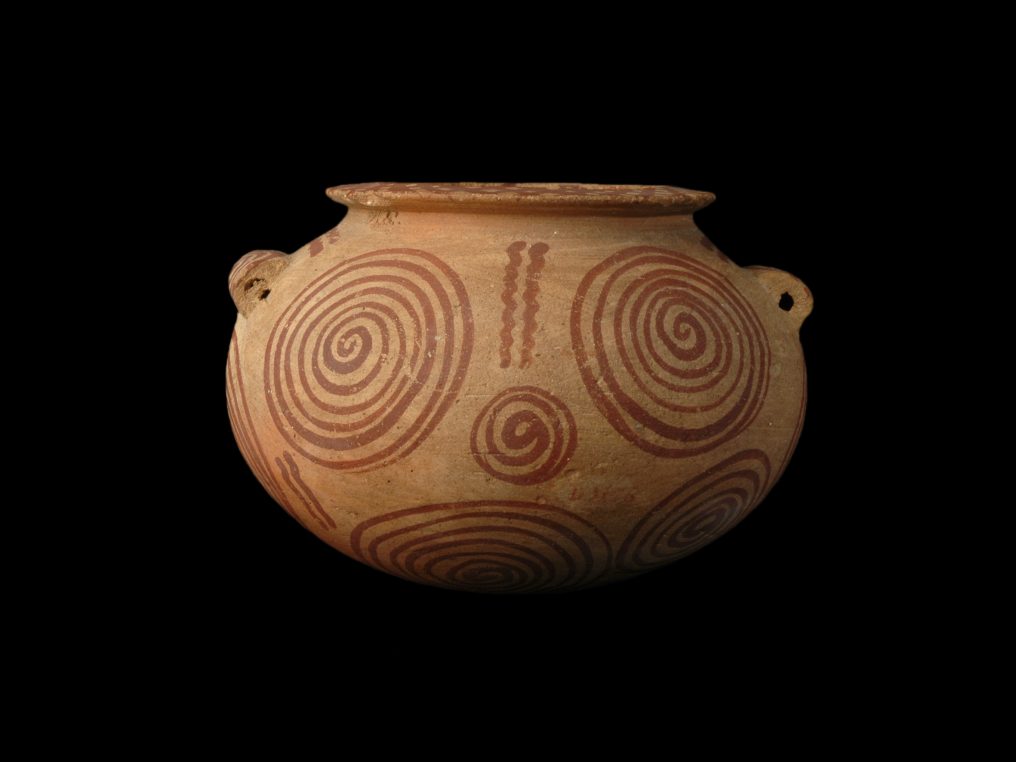 From “Arnaque to decapitation” (from Swindle to decapitation), is a large room next to the armours and guns, a huge collection with very beautiful shapes. “Judith holding Holopherm’s head”, and Nicolas Régnier’s painting of “Card players with fortune tellers”, and Felix Vallotton’s scene in a café are among the great works.  Auguste Rodin’s famous “Le Penseur, élément de la Porte de l’Enfer” from 1880, faces an “Ouvrier Philosophe” by Ferdinand Hodler, 1884, who has the same attitude, in one of the smaller cabinets of château de Zizers. “Liliput and the giants”, “Winter”, are more themes developed in these intimate wood lined rooms with wonderful old furniture. “Morphology”, a collection of vases and carafes, “the Senses”, “Chromatisms” end the visit with a long gallery of green, blue, pink, red, yellow, gold, brown and grey items, a mixture of fashion, accessories, furniture lined up as a rainbow. 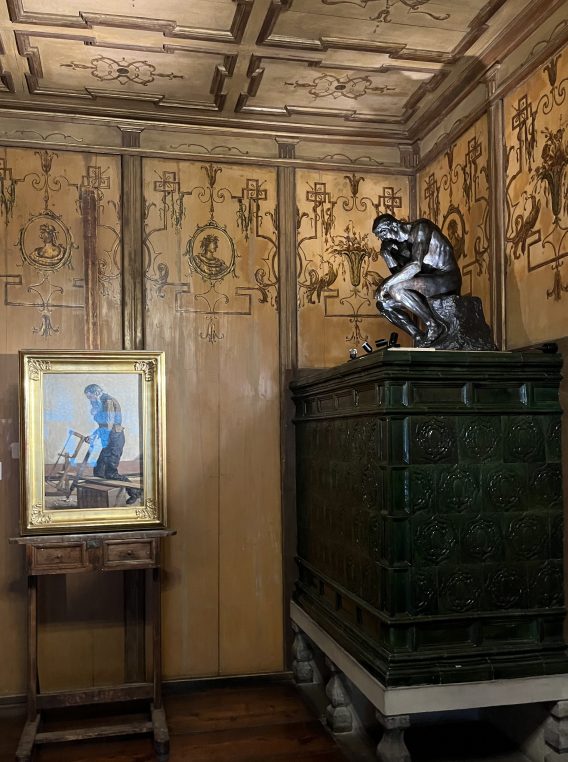 The success of this exhibition lies in many different details. The complicity between director Marc Olivier Wahler, who worked as a contemporary art curator in Geneva, Paris and in Michigan before taking over MAH three years ago, and Jean-Hubert Martin who has worked in many institutions in France, Switzerland and Germany and developed a new way of showing art. He also has a show at the Pushkin museum in Moscow, at the moment. He was totally free to choose what he wanted in the collections and was helped in this project by cocurator Tijs Visser. But also by the teams of the museum whom he publicly acknowledged as being exceptionally helpful. 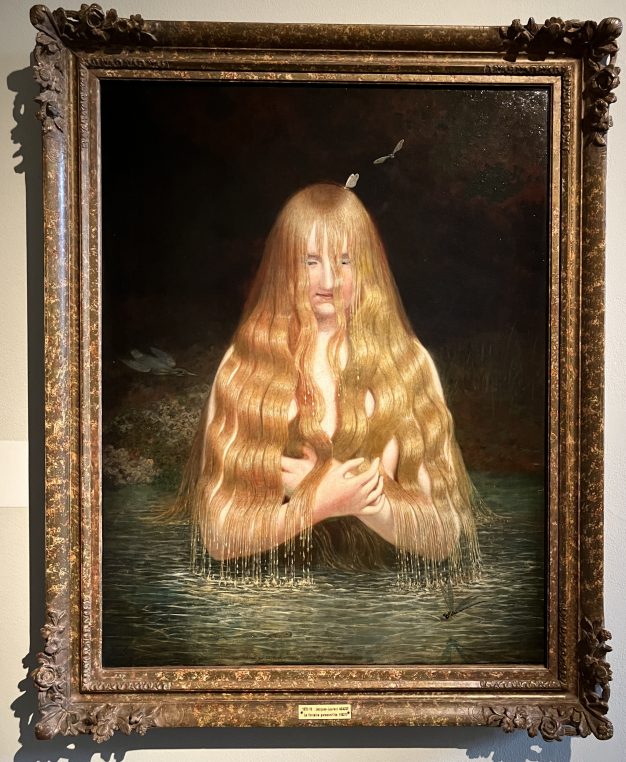 Jacques Laurent Agasse, (1767-1849), “La Fontaine personnifiée, (the incarnated fountain) 1837, is one of the chef d’oeuvre of the Musée d’Art et d’Histoire de Genève

MAH’s collections are as diverse as a municipal museum can allow (a bit like Petit Palais in Paris) with half a million pieces, some of them  having been given by citizens of Geneva, over the centuries. The huge space of the building inaugurated in 1910, is a luxury for any curator and the time allowed to prepare the show and to hang it enabled Jean-Hubert Martin to choose as many as 850 pieces in the storage rooms. 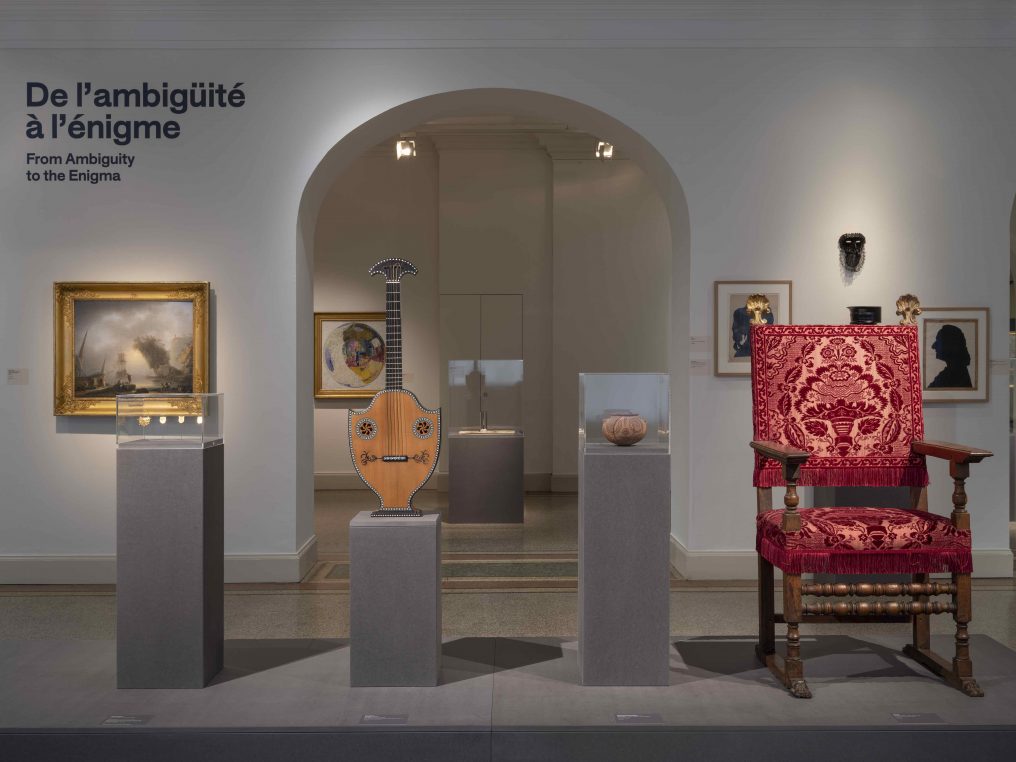 When you go, do not miss the galleries upstairs with the collection of art curated by Lada Umstätter, which include Antonio Canova, Venus and Adonis, and Konrad Witz’ altarpiece, “La Pêche Miraculeuse”, precious archeological pieces and my favorite, the self portrait laughing by Jean-Etienne Liotard, another famous 18 th century Swiss painter. This show is a good way of apprehending Switzerland with its sense of humor and talents. 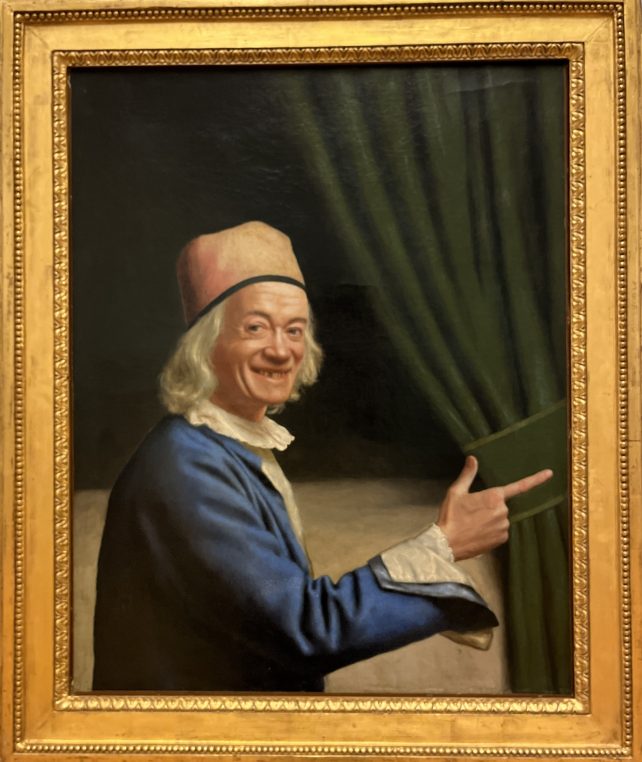 “Pas besoin d’un dessin”, until June 2022, at Musée d’Art et d’histoire de Genève. A catalog in English and in French will be published soon with photographs of the exhibition. A color chart with most objects listed by color and shape, is already available. There is a cafeteria in the museum.

3 Comments on “Geneva is taken over by storm, with Jean Hubert Martin…”