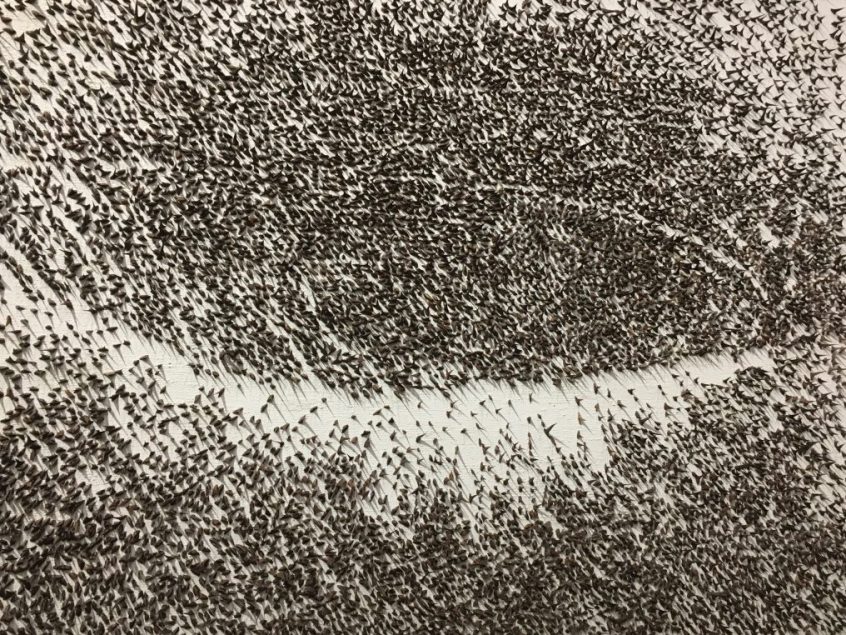 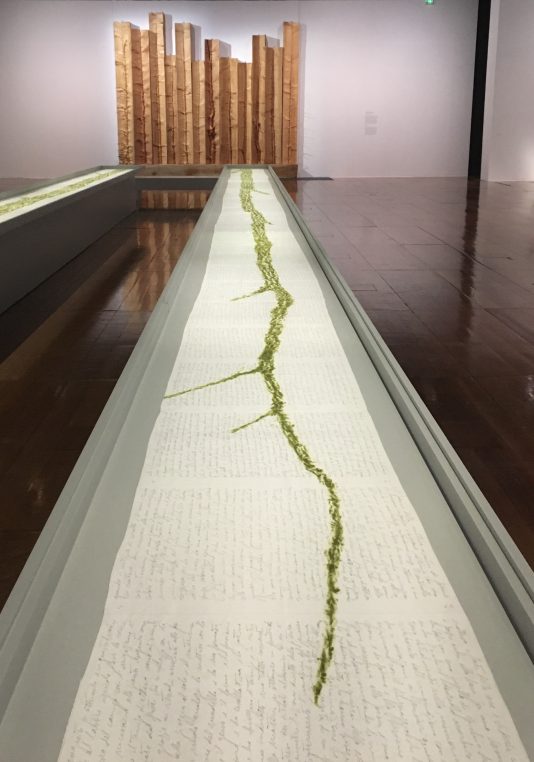 Walking into the main room of the exhibition, “Giuseppe Penone, Sève et Pensée” (Lymph and thought) at BnF is a moment of pure happiness and ecstasy. The show, curated by Marie Minssieux-Chamonard and Cécile Pocheau-Lesteven, focuses on links between man and nature and starts with early drawings and photographs from the 1970’s, continues with sculptures and ends with finger prints paintings by the Italian artist who focuses on trees.  A spectacular installation “Pensieri e Linda” is conceived with the frottage of elderberry leaves on fine linen canvas of the trunk of a thirty meter acacia tree surrounded by handwritten text. Like Anselm Kiefer a few years ago, this is a major contemporary art show at the French National Library and Penone’s writings can be heard in translation via audiophones. 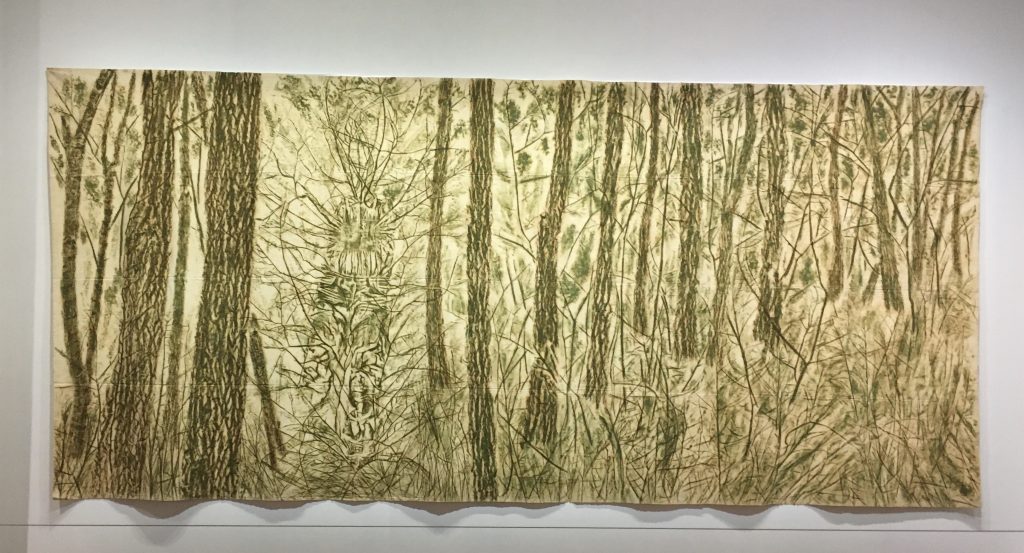 Giuseppe Penone, 74,  had not exhibited in Paris since his monumental sculptures in parc de Versailles in 2013  and his major retrospective at Centre Pompidou in 2004. He has a very dramatic permanent tree lying in Jardin des Tuileries near the Passerelle des Arts. He represented Italy at the Venice Biennale and  was awarded the Japanese prize Premium Imperial in 2014. In the show, his early works are shown in a book published in 1971, where he used photos and prints to analyse parts of his body and skin. He already then,  studied the relation between tree barks and skin and emphasized the importance of touch. 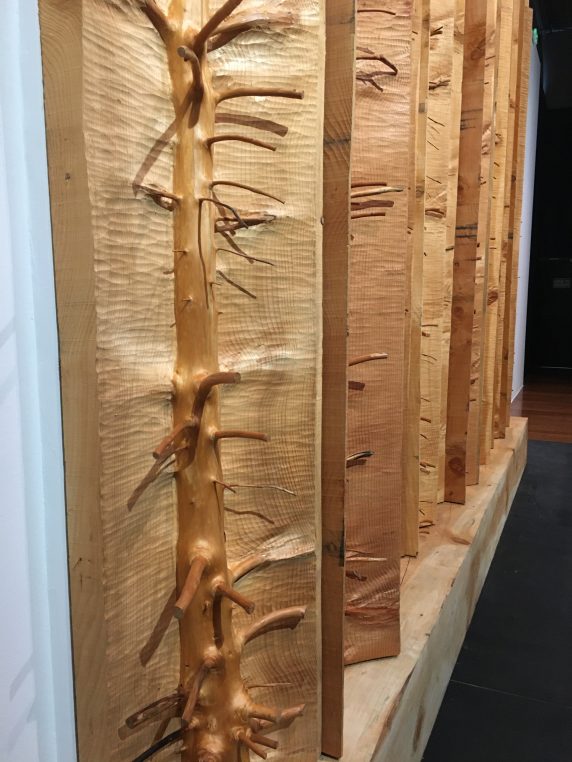 Alberi libro, (Book Trees), 2014, twelve beams are carved out to let the tree at its heart appear like an open book, private collection

At one end of the very large room, facing a large wooden sculpture made of twelve beams, sculpted to the core of the wood,  where he searched for the essence of the trees, stands a triptych made of Carrara marble carved out by the artist and two large drawings where you recognize eyelids drawn with acacia thorns: it is called “A occhi chiusi” (closed eyes) and was made in 2009. This is the most spectacular part of the show with the installation of the acacia tree imprint in the center. Multiple drawings are lined up on the walls, giving a further illustration to his thoughts. 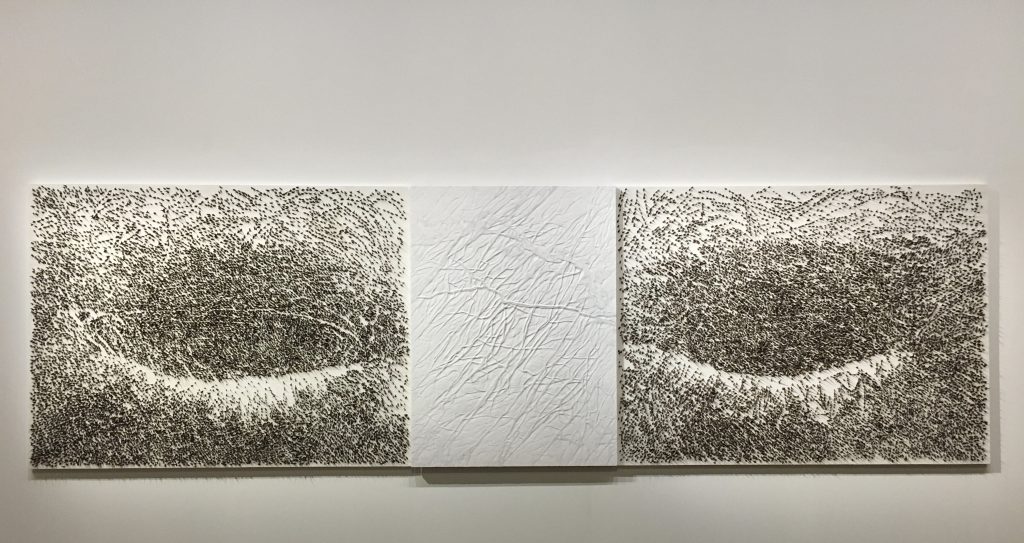 “A occhi chiusi” (With Eyes Closed), triptych  marble and canvas, 2009

On the walls of the same room a series of photographs of the (handsome) artist in 1970 show him with mirrored contact lenses on his eyes. The work is called “Rovesciare I propi occhi” (reverse his eyes). In limiting his eyesight, he turned his eyes inwards and developed an inner vision. His drawings and prints of fingers and eyes pierced with thorns, close the exhibition with four large green paintings of fingerprints. They are called “Leaves of grass” and get their name from Walt Whitman’s book published in 1855. With a continuous interest in touching and leaving a print of one’s passage on earth, Penone works with different natural mediums, wood, clay, bronze, but also natural plant dye. The sculpture in bronze and stone “Pensieri di folie” (thoughts of leaves) looks like wood and will age and change color with time. 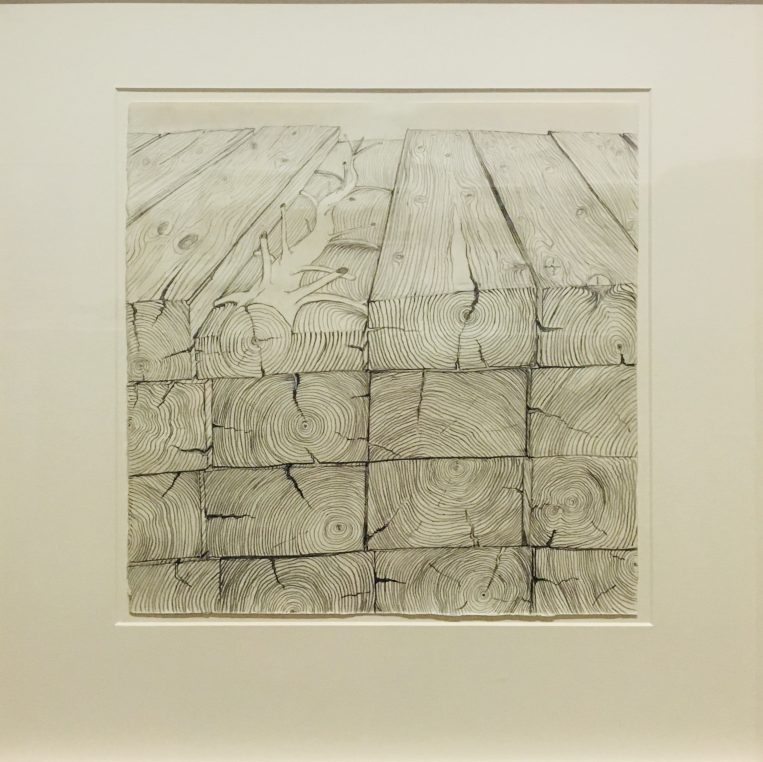 His works are both very mar-aerial and very conceptual, physical and spiritual. The way the artist uses the lines of the trees and extends them on the canvas is beautiful and he enhances the lines of the trees and the lines of the fingers in a similar way. His latest paintings are made with digital finger prints and green paint. A great film shows how he designed a garden near Torino where he lives and how he sculpts nature as easily as wood or marble, creating alleys and perspectives on the ground as if they were branches. 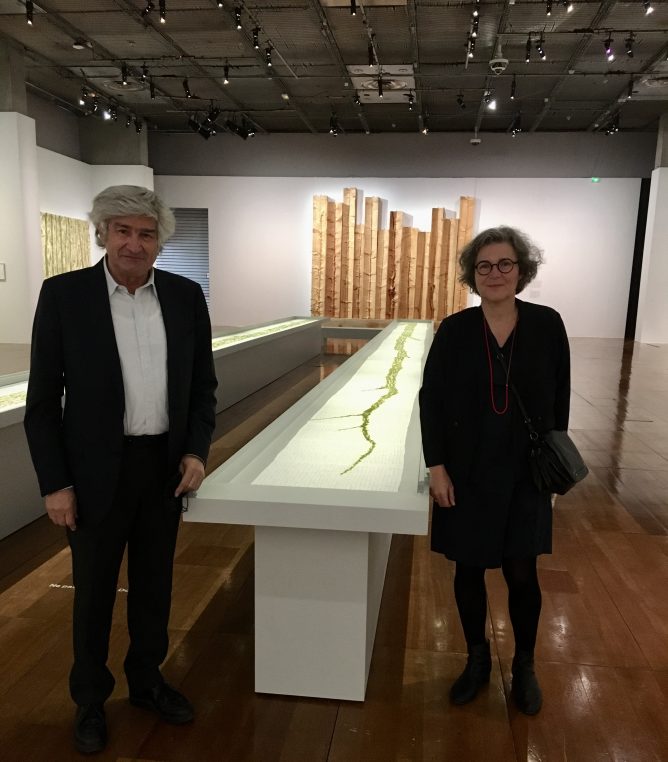 The artist Giuseppe Penone with Cécile Pocheau-Lesteven, co-curator of the show

This magical show with a unique scenography and lighting, will last until January 23 at BnF. Make sure to see it, you will come out of it rejuvanated.

On November 3, a large exhibition opens on Baudelaire at BnF. 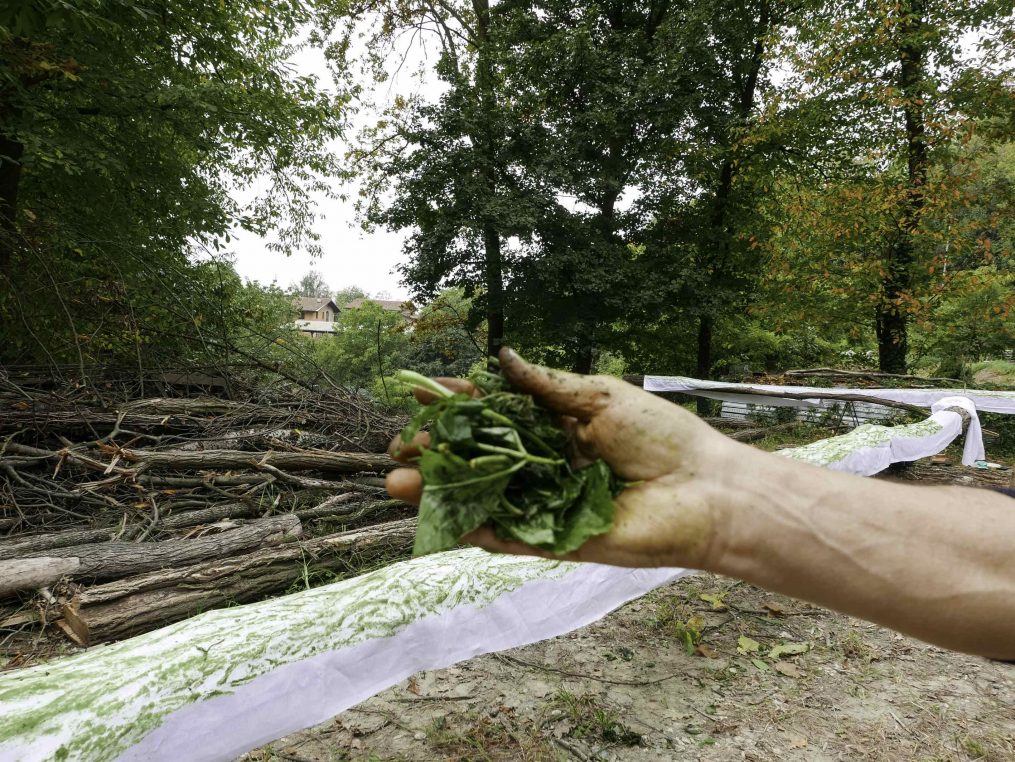