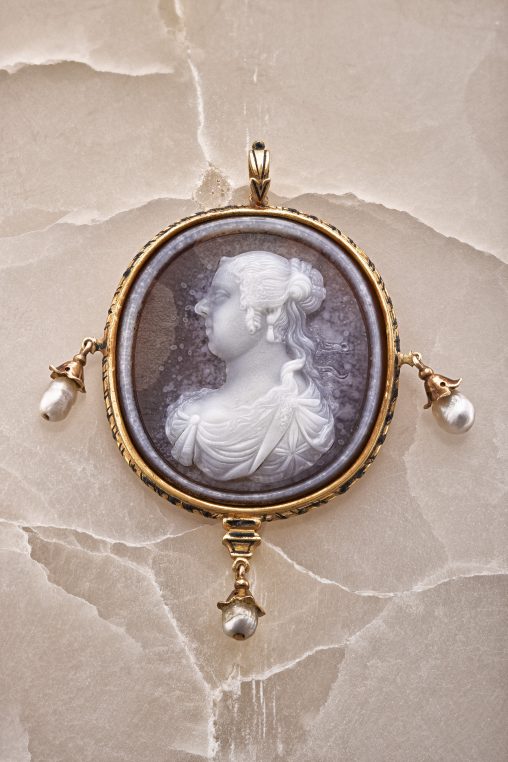 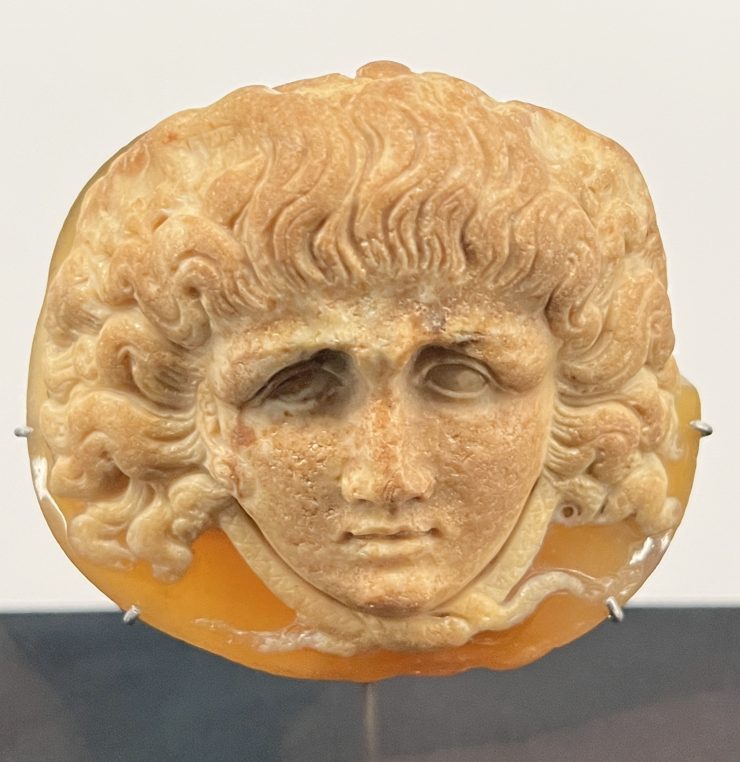 Sardonyx cameo, The head of Medusa with wings in her hair and snakes at her neck, I-II nd century AD? found in the Tiber, Rome 1886

Guy Ladrière is an established antique dealer on quai Voltaire, facing the Louvre. He started his career with Charles Ratton (1895-1986), a specialist of primitive arts, who organized the major 1930 exhibition of African and Oceanic art at the Pigalle theatre. He learned from him the sense of aesthetics of objects. His passion for research and his fantastic eye have made him a great specialist of sculpture from Antiquity to 18 th  century. But last week, it is at Ecole des Arts Joailliers, the school founded by Van Cleef & Arpels, that he was presenting his intimate collection of sculpted stones, cameos and intaglios, which he has been identifying for almost fifty years. The show is curated by Philippe Malgouyres, from the Louvre, the very museum where he first became acquainted with medieval rings. He pursued his passion at the Cabinet des Médailles of the Bibliothèque Nationale where he trained to recognize the tiny works of art. From Alexander to Medusa, Augustus to Elizabeth I, there are many famous faces on these sculpted gems. But what is most striking is the precision of each portrait and the beauty of the stones. 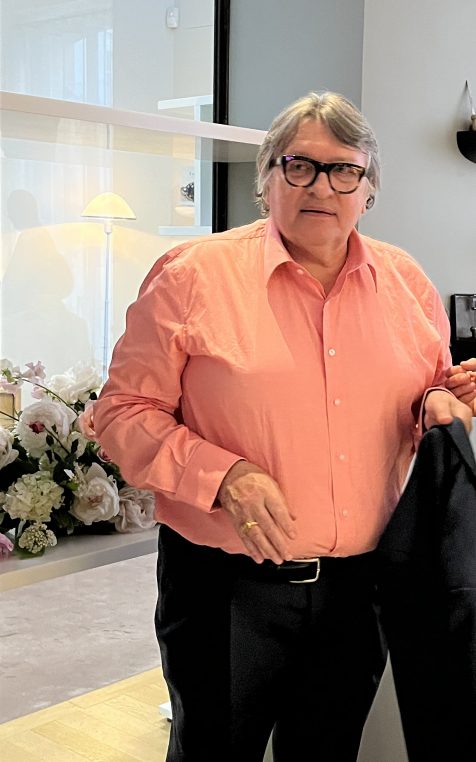 Guy Ladrière, is a passionate collector. These sculpted stones are his most intimate objects

It was all thanks to an encounter at a Parisian dinner with the brilliant Capucine Juncker-Fort, a gemologist who taught at the time at the school of Jewelry and now writes the blog Property of a lady from London. When she heard of the originality of Ladrière’s collection, she alerted Marie Vallanet-Delhom who runs the school. At the opening, Laurence des Cars, president of the Louvre, was sitting next to Nicolas Bos, President of Van Cleef. Amin Jaffer, senior curator of the Al Thani collection, who organized the most fabulous jewelry exhibitions at the V&A and at Grand Palais, was also there with the Ladrière’s great friends, the  Nortons who run S.J.Phillips. But of course the stars of the evening were three hundreds engraved gems and rings which were collected with love and passion. 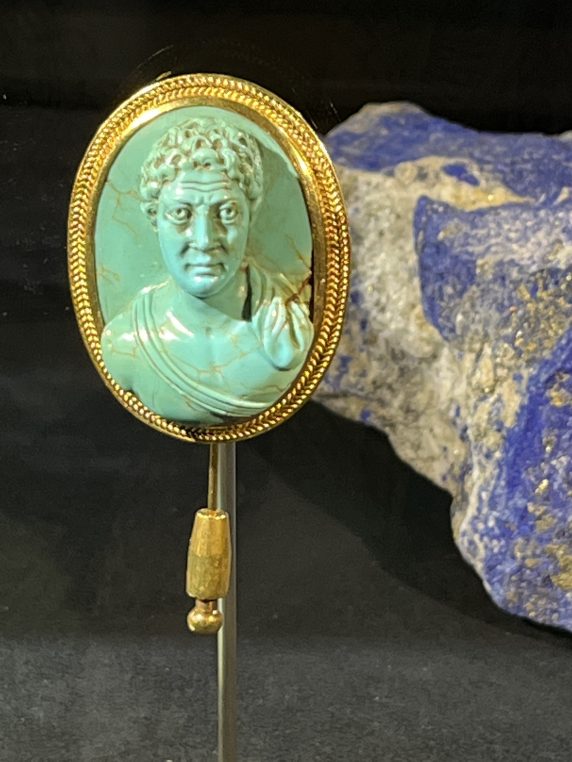 Guy Ladrière regularly wears his rings so it is both a great sacrifice for him to part from them for the five months of the exhibition and it is a great emotion to see his pieces displayed in the precious cases of the Jewelry School. In the catalog published by Philip Wilson Publishers in 2016, Diana Scarisbrick, Claudia Wagner and John Boardman praise the Renaissance and early Modern period cameos as well as the impeccable provenance from the Earl of Arundel, cardinal Albani, Malbrorough,  Wyndham Cook and Sir John Evans. “As a collection, it stands on its own removed from the current art collecting fashion”.

Queen Elizabeth crowned with the lionskin of Hercules, and an elaborate hairstyle with flower is one of the most striking pieces in agate from teh 16 ht century. A sardonyx cameo of Minerva from the 2nd or 3 rd century (or 18th cenury) , onyx, chalcedony, bloodstone, carnelian, reddish amber or turquoise: one discovers all kinds of precious stones which were used in the II nd century and in the 18 ht century which makes the pieces hard to identify precisely. 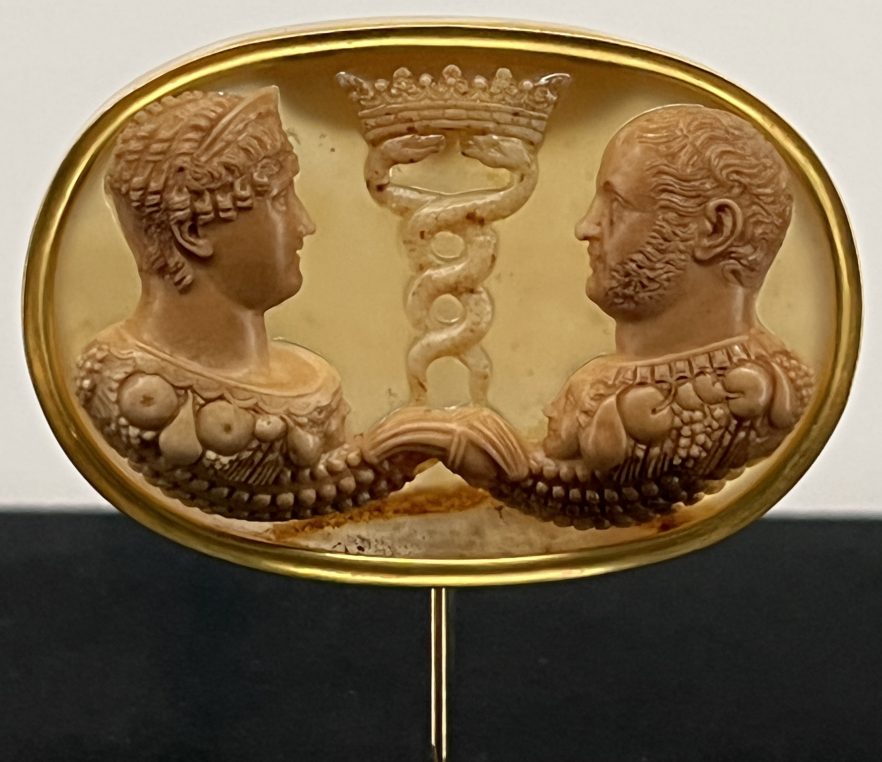 Another fascinating piece is Hercules wrestling with the Nemean lion which he strangles while stamping on a dragon at his feet. It comes from Southern Italy in 1220-1240 and is made of chalcedony and set in a gold ring. Cupid driving g a chariot  with two horses, Theseus or a Roman address, there are innumerable scenes which spike the imagination. Then the animals with this Indian rhinoceros, a Renaissance 1582-84 revival of the animal which was to be presented to King Philip II for his Menagerie at Aranjuez. These little pieces actually tell us the history of the courts of the time and enhance the importance of exotic animals. 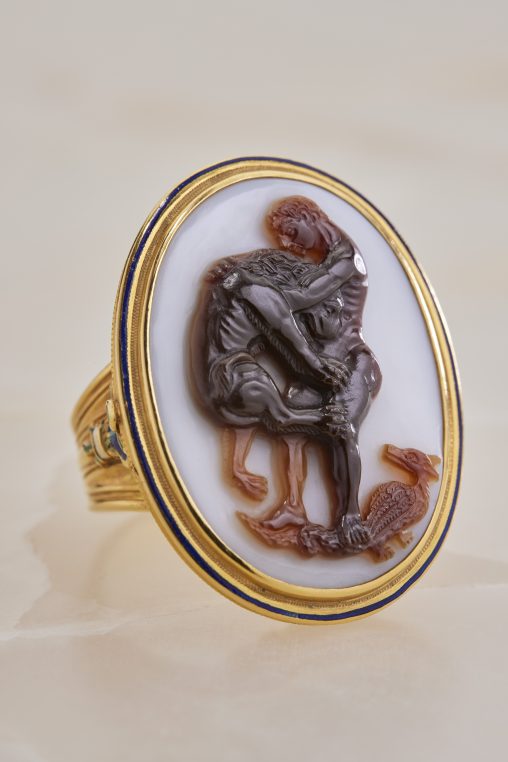 Kings and Queens, Greek Gods and heroes, animals and Venuses or Medusas, one realizes thanks to this unique show that miniature sculptures were at the core of artistic representation from the Renaissance to the XIX th century. Engraved stones, intaglios and cameos were at the heart of  political life and luxurious representation. We owe to this very peculiar collector, whose life has been devoted to diverse passions, a discovery of major importance. 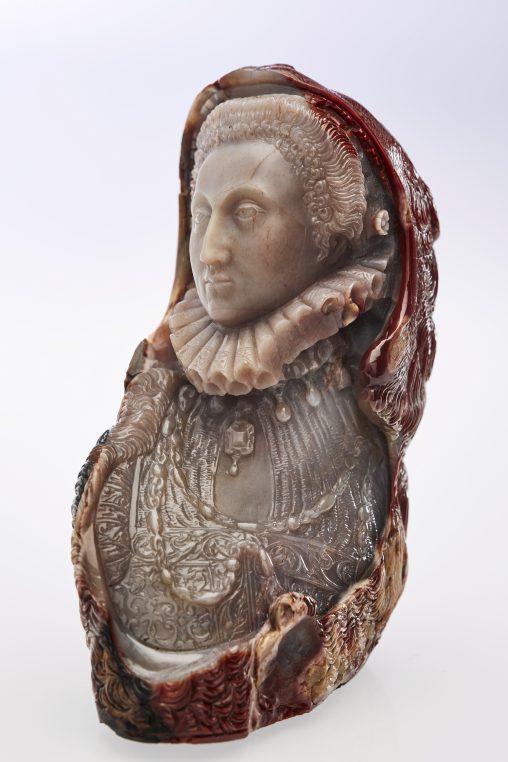 The exhibition is at École des Arts Joailliers, 31 rue Danielle Casanova, until October 1. Entrance is free but you need to book. A catalog in French is published (10€) and in English teh exceptional book published by Philip Wilson Publishers

On May 29, Guy Ladrière opens an exhibition of “Sculpted heads in Occident” at the gallery , 11 quai Voltaire, which is now run by his daughter Sandrine.

One Comment on “Guy Ladrière, a very special collector…”