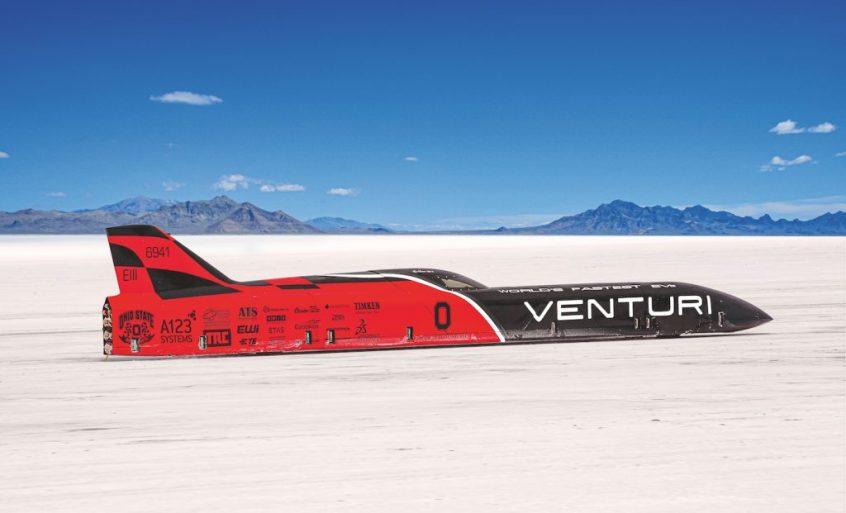 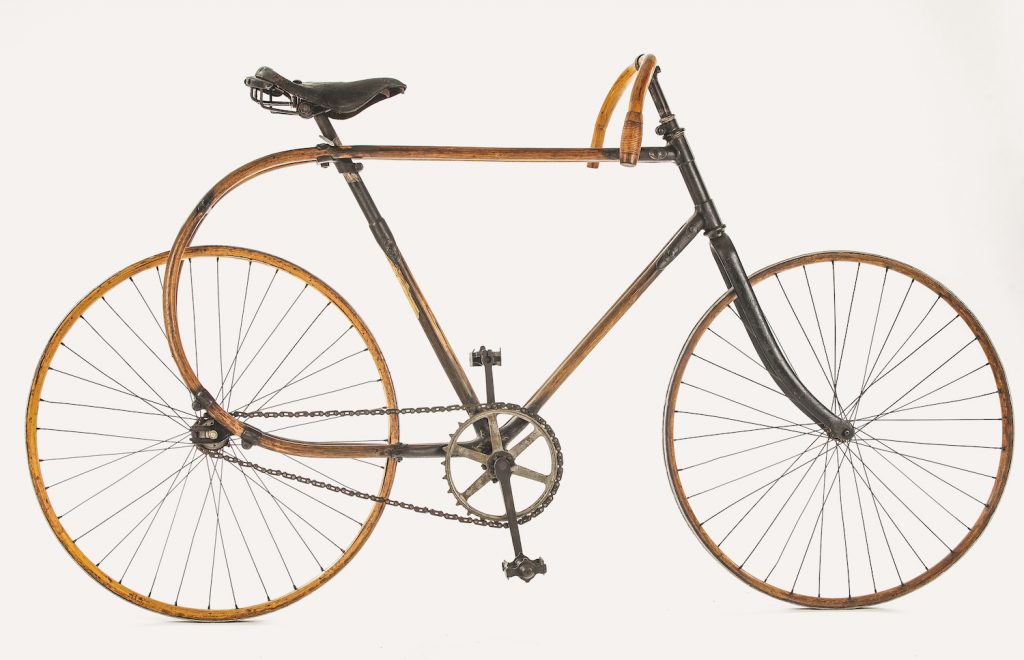 Two years ago, Rodolphe Rapetti, director of Château de Compiègne, had impressed us with a fabulous car show “Concept car-Pure Beauty” consisting of models with the most brilliant designs, which had invaded the first floor salons and everyone, young and old, enjoyed it. This week, a new exhibition called “Vitesse“, (Speed) is opening with a wide range of vehicles from horse-drawn sulkies to cycles in wood and a XX th century Ferrari: it tells the story of man’s desire for speed. From Joséphine Bonaparte’s fancy sleigh to Venturi, the fastest electric car in the world, we travel through time and shapes in this magical exhibition. 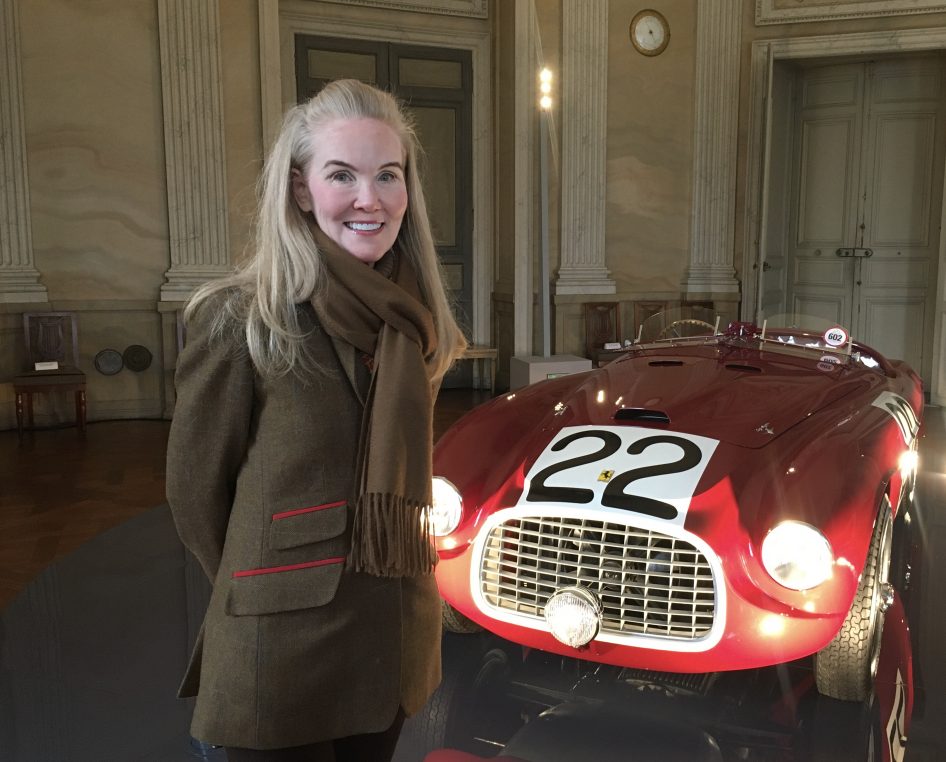 When Enzo Ferrari designed the “Marchetta” in 1949, he suddenly doubted that it could compete and finish the 24 hour race in Le Mans. The night before the pilot Luigi Chinetti convinced him that the car could do it. And after driving 22,5 of the 24 hours (the copilot was only allowed to run it for an hour and a half), he won the race. He drove twelve times at Le Mans and won three times. This is the car that Anne Brockington Lee and her husband acquired in 1994 and lent to the exhibition with a superb Bentley 4 1/2 litre from 1930. And she talked at the inauguration explaining in a very moving way her husband’s passion for cars and how they had bought them. 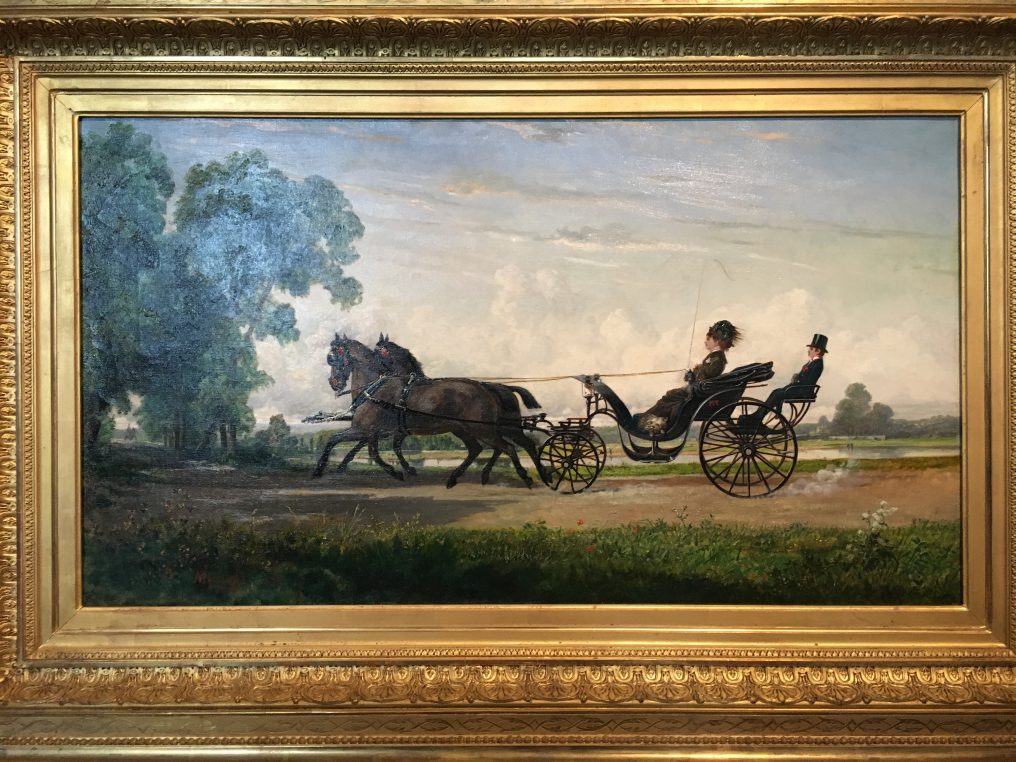 The show starts in the dramatic downstairs hallway with a Maserati 250F from 1957, a Mercedes W 154 from 1939 and a Lotus MK33 R9, lent by the Museum of Automobile in Mulhouse and a Bugatti 35C from a private collection.  Some motorcycles, a 1926 Peugeot, a Koehler-Escoffier from 1935, broke records at the time. What is most interesting in this exhibition is the juxtaposition of different vehicles which were the speediest in the same years: horse drawn carriages from the 1870’s with bicycles built at exactly the same period. Both were the fastest in their category. These stand on the first floor of the museum and we discover how beautifully decorated some of the carriages were and well designed the bicycles are. 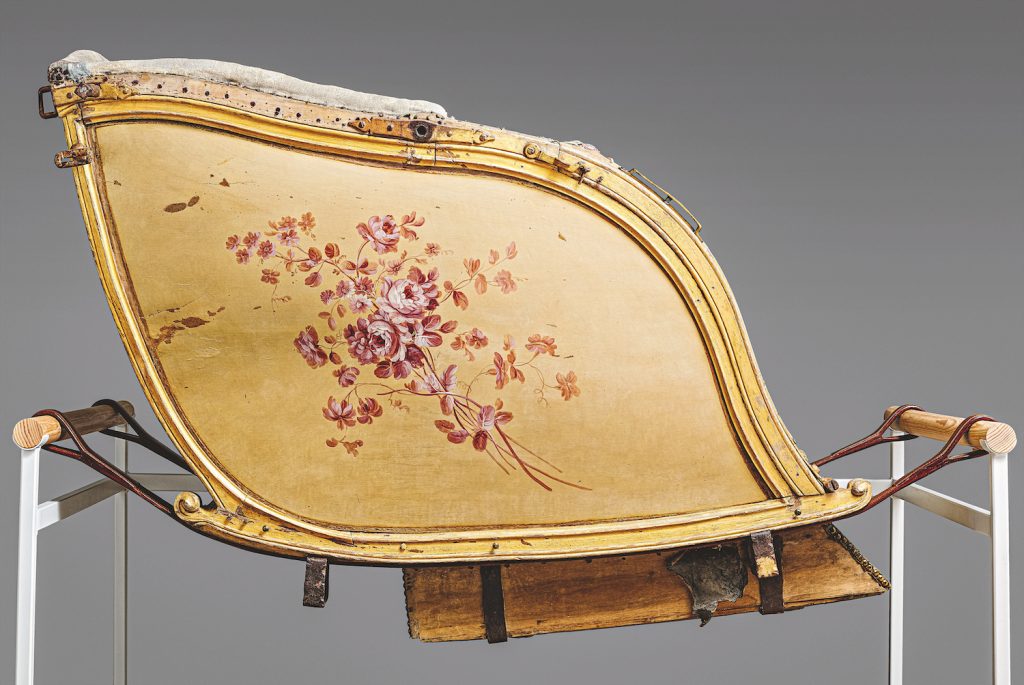 The different sulkies and carriages which were designed for speed had very large wheels and ultra light seats. Many illustrations and paintings show these vehicles in action. It is fascinating to observe the impeccable design of the different accessories whether for carriages or for bicycles. There are some illustrations of races and a watercolor by Jonny Audy of the first trot race in 1870 shows huge wheels and a jockey with his feet almost touching the horse’s back. 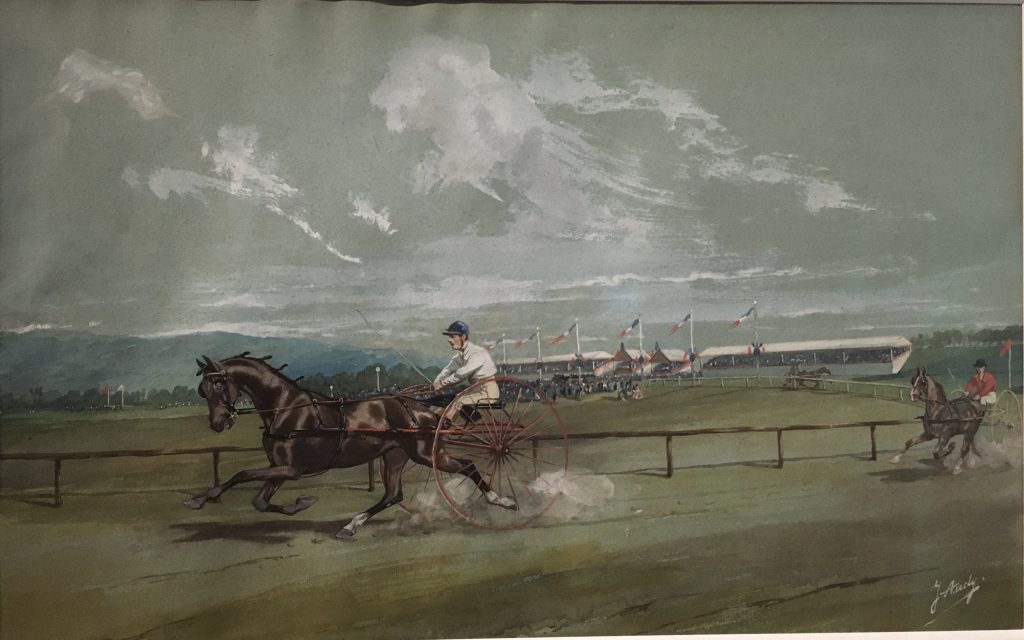 All the illustrations of the Turn-of-the-Century show the obsession of men and women for speed. There are some fun prints of races between the two sexes, a photo “L’auto déformée” by Jacques Henri Lartigue, shot in 1912 where speed is well depicted. Henri de Toulouse Lautrec also painted La Promenade des Anglais in Nice and the caricaturist Sem shows the rivalry between  Man-horse and automobile. A whole room is devoted to watercolors of car races by Rob Roy from the 1930’s to the 1980’s. This group of paintings were given to Compiègne by his children. 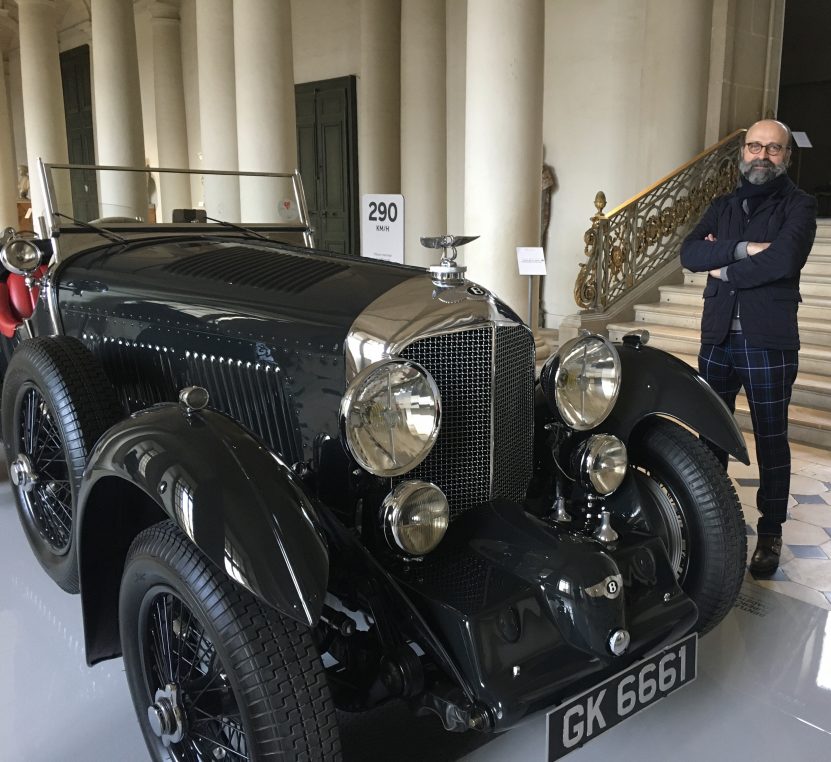 Rodolphe Rapetti, a passionate of cars, stands behind the Bentley 4 1/2 l, lent by Anne Brockington Lee

One of the prettiest room of the show is the one with Empress Joséphine’s sleigh, 1810, (which was just acquired and restored by the museum at auction) facing Empress Eugénie’s own sleigh from 1860. On the wall the superb “Water” by teh Nancy baroque painter Claude Deruet, 1640-1641, lent by the Musée des Beaux Arts in Orléans, illustrates in an obsessive manner the joys of traveling on ice. Deruet painted a series of four elements, air, fire, water and earth, for Cardinal de Richelieu. In this painting of water, he represents mostly the ice, with seven sleighs pulled by horses on a frozen river. The painting would make a fabulous puzzle in its intricacies. 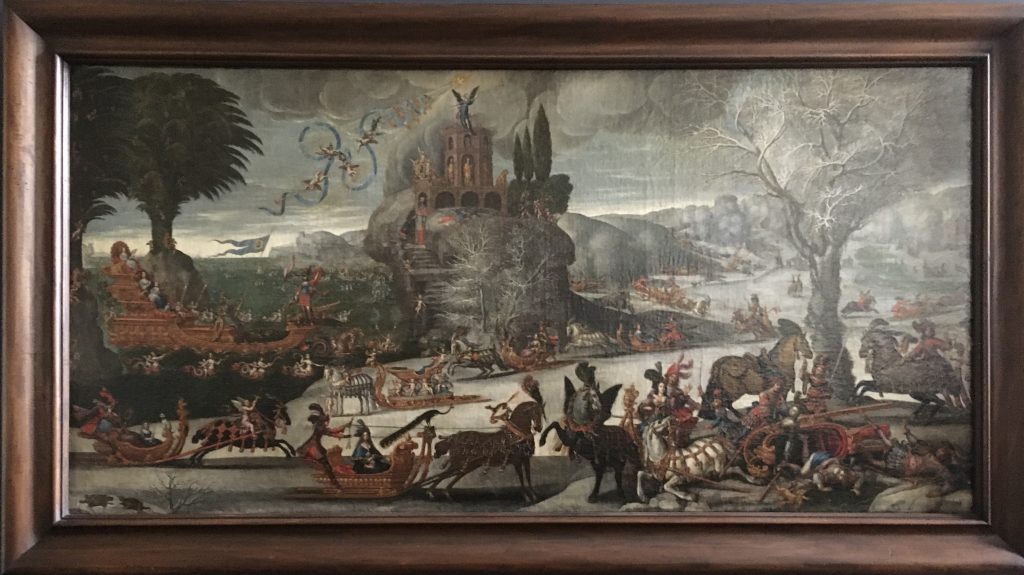 In the ballroom of the Imperial palace, a model of the Venturi VBB-3, made in Monaco in 2016, represents the fastest electric car in the world which ran at a speed of 500 kms an hour. 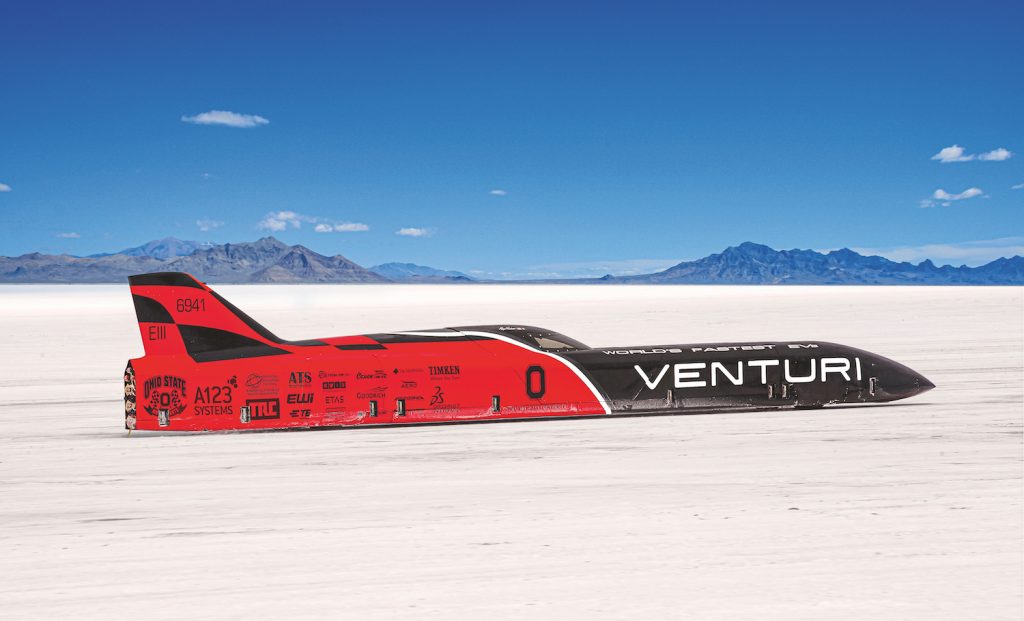 The model of the Venturi VBB-3, Monaco 2016, is presented in he ballroom

This exhibition is fun because it is very varied. Paintings, lithographs, watercolors illustrate well the cars, bicycles and carriages which belong to Musée national de la voiture of Compiègne (founded in 1927) and to Musée de Mulhouse, but also to numerous institutions who often keep them in reserves. They have been brought out and restored for this show which is a perfect theme of visit for Xmas with children and grandchildren. The Château de Compiègne is itself an interesting building devoted to the Second Empire because Napoléon III loved staying there. Its decors are very grand and all the cars are presented in the formal rooms.

Whether you are interested in “spiders” with four equal-sized wheels or elegant curved-wood sulkies, XX th century rally cars, or just the aesthetic of a wooden bicycle, this is a show worth seeing.