I happened to be in Deauville, the Normandy seaside resort which could be compared to Easthampton, for a golf tournament, when I heard that Les Franciscaines, a new cultural space set in an old Franciscan convent was opening the very same day. What a wonderful coincidence. This turn of the century resort which is now very, very busy with weekenders and local inhabitants, has a beautiful beach where racehorses train in the morning and courageous bathers swim in the cold channel water. The 6 200 square meter convent was renovated with great refinement by architect Alain Moatti and includes free public spaces for reading newspapers and magazines, two galleries for special exhibitions (5€) and a small museum dedicated to painter André Hambourg who died in 1999. The media library includes films, books and music for children and adults, and offers incredibly beautiful spaces for relaxation. 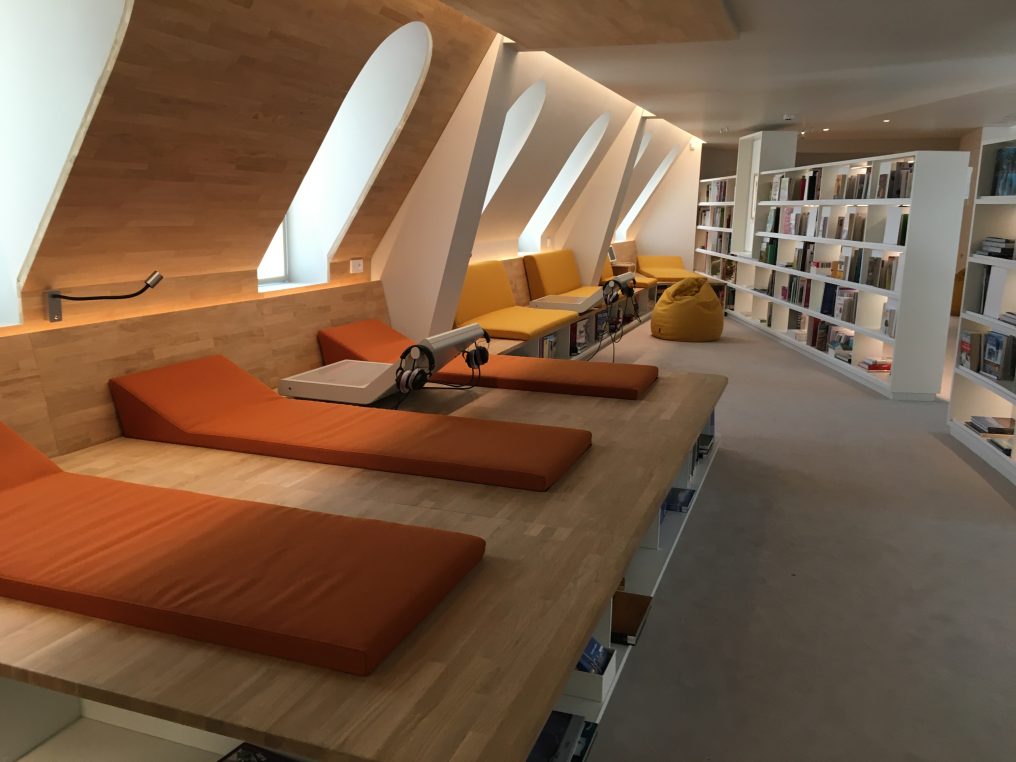 I was lucky to run into a charming and very informative young man when I arrived and he volunteered enough details to make the visit fascinating. It was Laurent Michel, the financial director, who was trained at Centre des Monuments Nationaux and talked about the transparency between all spaces and the great fluidity of light throughout the building. This very eclectic cultural space wanted by the mayor of Deauville, Philippe Augier, was built as a chapel in 1876 with an orphanage for daughters of sailors lost at sea. Two years later, the Franciscan sisters built a convent  which was active until 2011. Its focus today is on all kinds of cultural events from concerts, ballets, readings, art shows and happenings. 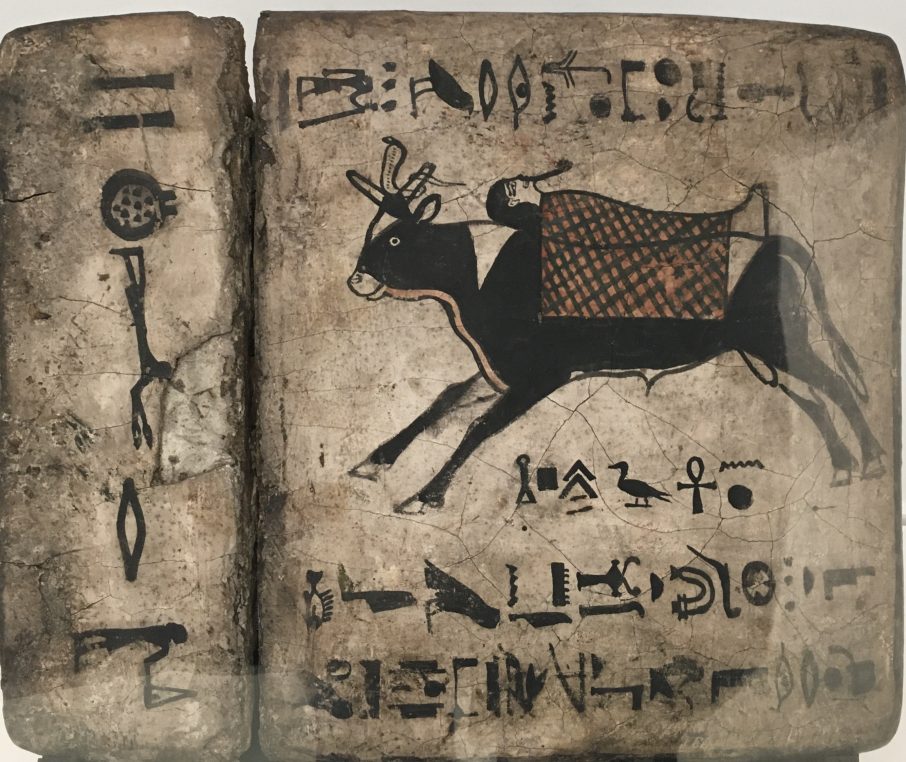 Element of sarcophage, Imeneminet, race of Apis taking away a dead body, 943-731 bc, Musée du Louvre

After spending a little time reading the New York Times in the lobby, I very quickly drifted into the exhibition gallery which had an appealing title for its first exhibition: “On the roads to Paradise!” The name seems to come from the Persan “pardez”, a closed garden. The Greeks transformed it into “paradises”, garden. In the 16 th century paradise becomes the part of a harbor where ships are secure and it also means in French the top seats of a theatre like in the film “Les enfants du Paradis”. It reminded me of the wonderful book published thirty years ago by Pierre Antoine Bernheim on paradise, a comparative study of what it meant for Jews and Christians. In this exhibition, Jewish Torahs, Bibles and the Koran dialogue  about this promise of perpetual felicity which is linked to paradise. Photographs, paintings and sculptures take the visitor through a maze of beauty, which starts with Argentinian artist Miguel Rothschild‘s fabulous installation “The fault is not in our stars…”  lent by Fondation Carmignac. 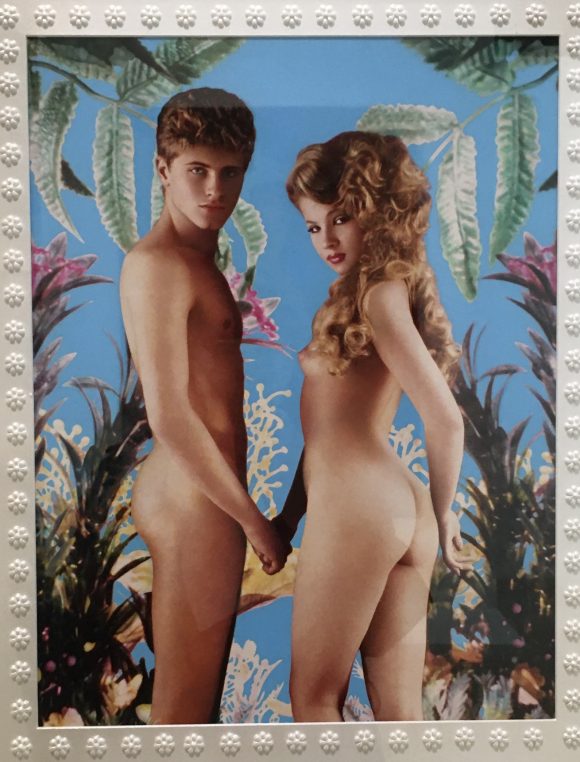 Many books were lent by Bibliothèque national, but also paintings from teh Louvre and Musée d’Orsay, by Paul Baudry (Eve),  Maurice Denis (paradise), a video by Bill Viola (Incarnation) and by Miguel Chevalier (Sur-natures, Paradis artificiel) punctuate the visit in beautifully designed galleries, which is full of surprises and very lively. William Bouguereau, Gérard Garouste, Emmanuel Mané-Katz have dramatic paintings and the show ends with a pretty Chagall, “Sunset”. It is curated by Lynda Frenois, the general director of the Franciscaines with Thierry Grillet, associate fellow of the Ideas and Imagination Institute at Columbia University. 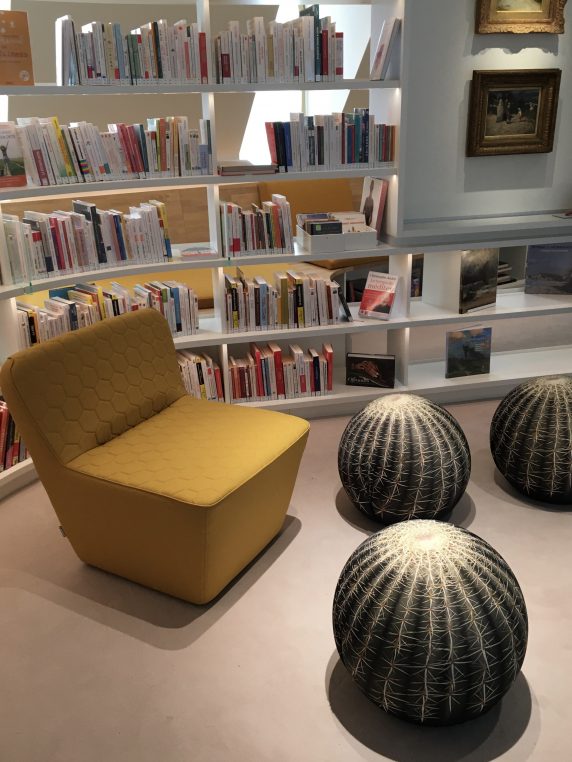 A confortable reading chair in the Normandy exhibition space

Once you come out of the exhibition, you can climb the stairs to the galleries around the cloister with reading spaces, books, videos and dvds to borrow, a very luxurious children gallery with games an ebooks,  and more paintings to see. The permanent museum of André Hambourg’s works is not the most fascinating part of the center but his resistance activities during the war and his adventures in North Africa and the Middle East, are fun to follow on the video of his life. He died in Normandy and his widow bequeathed his paintings to the city of Deauville under the condition that they would be exhibited in a museum. There are many photographs of Normandy and different spaces dedicated to the sea and the beach, and others to horses which take a large part in the “season” with its August races and sales of Yearlings which are famous around the world. 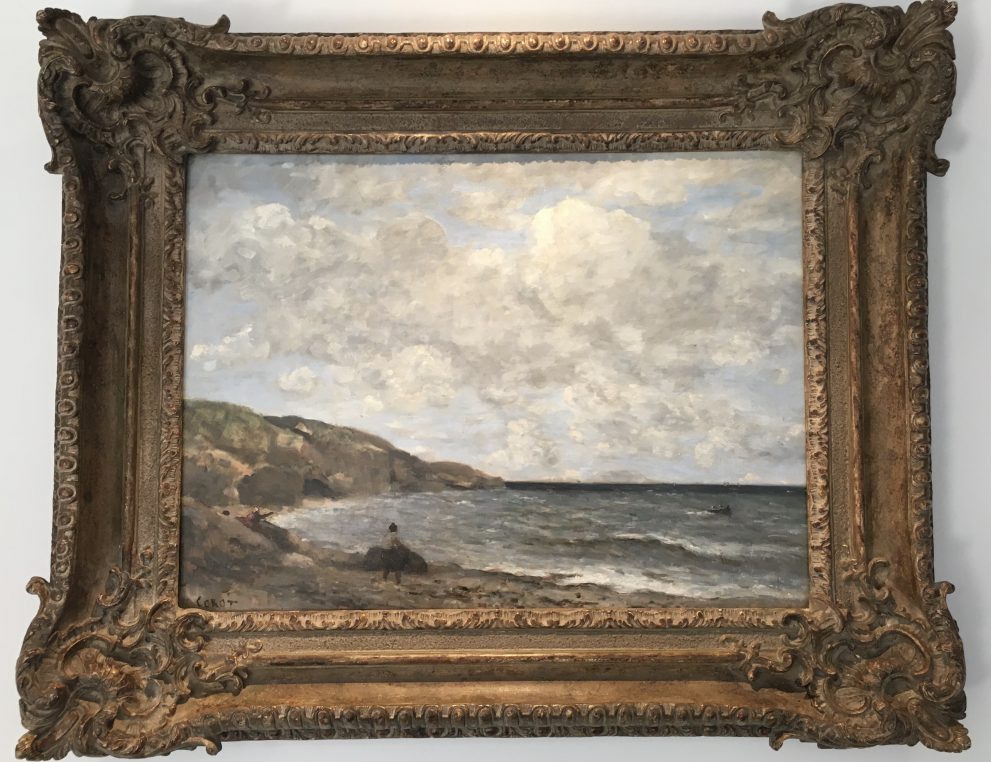 This place is perfectly adapted to the town which has luxurious hotels, a casino, many very good restaurants and a golf course in Saint Arnoult, near the race course. Its architecture is very pleasant, the Réfectoire, a simple restaurant with trendy sandwiches and designers salads, is pretty with a large terrace and its location, one minute from the beach and five minutes from the Hotel Royal, makes it a perfect destination for after the beach or morning coffee with newspapers. Deauville is mostly known for its spending crowds, its music Easter festival and its American film festival. This brings even more culture to the town on a permanent basis. When I went in the afternoon, there were mostly middle aged people enjoying their confortable seats. But concerts in the 200 place hall and dance events should draw larger and younger crowds.

I definitely loved the space and the kindness of all employees from the guard in the exhibition space who seemed to love the art, to the young trainee on the second floor (a Parisian) who explained the attraction of the yearly subscription. It is definitely a space for locals as much as for tourists. And on the way to it, you will walk through streets filled with Turn of the Century houses which have made the success of Deauville at la Belle Epoque. 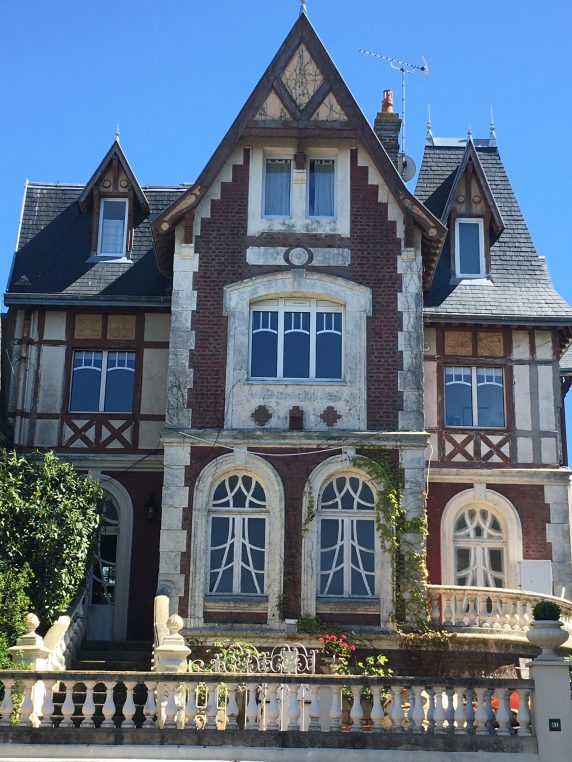 “On the Roads to Paradise” is on until August 22.

One Comment on “In Deauville, a spectacular new cultural space”