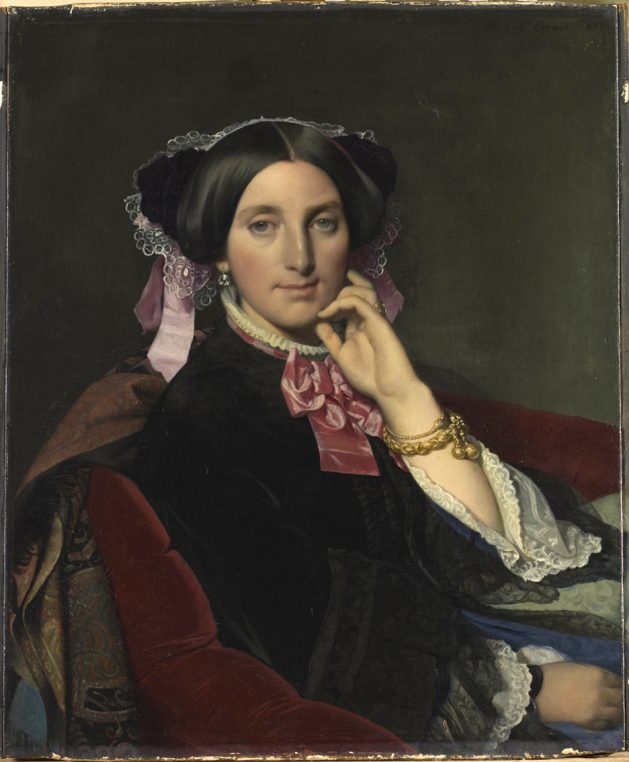 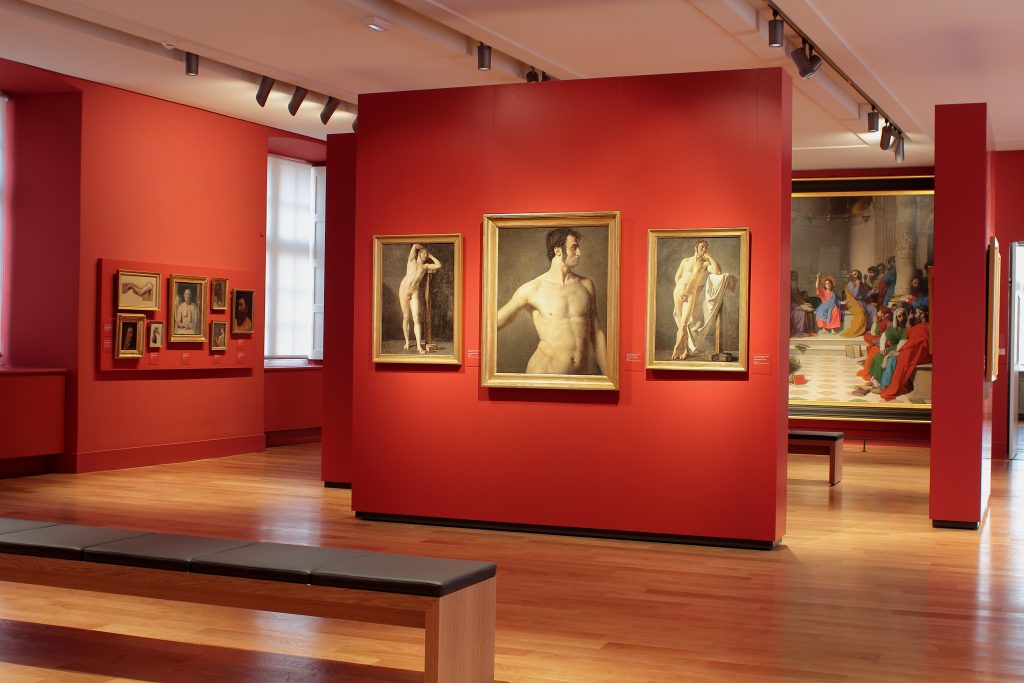 The city of Montauban, located an hour north of Toulouse, is famous for many reasons and at the moment primarily for its two great artists, Jean Auguste Dominique Ingres and Emile Antoine Bourdelle born six years before the master’s death. Last December, it reopened its museum after three years of restoration and 13 million €, and visitors have come in large groups all summer to see forty four paintings and 4 500 drawings by the master painter, and 68 sculptures and more drawings by the sculptor. If the Louvre and Musée Bourdelle in Paris, each own more of their works, Musée Ingres Bourdelle has a particularity which is delightful: it sets them in their milieu, showing what a great teacher Ingres was with so many brilliant followers like Chassériau, Flandrin, Gérôme and Cambon. 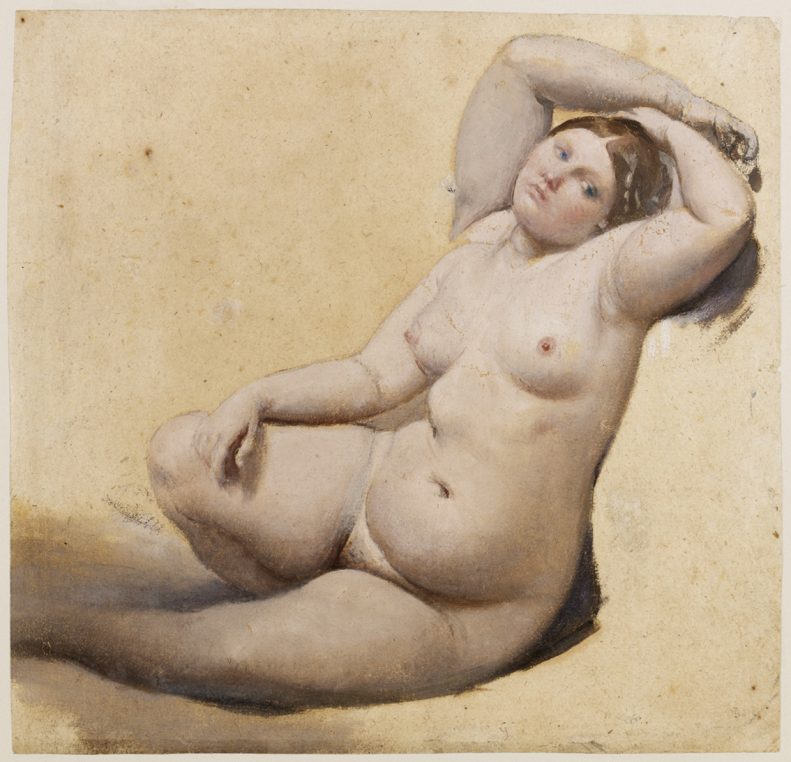 The first great visual pleasure is to enter the courtyard of what used to be the 17 th century Palais Episcopal (Bishop’s palace) with its delightful red bricks and two new glass pavilions which host the ticket office and convenience rooms.  It was built in 1663-1680 by Pierre III de Berthier, at the same time as the cathedral, after the city was recovered from the protestants by Cardinal de Richelieu. After the Revolution, it became the town hall until 1909 and Musée Ingres, created in 1843, and enlarged when Ingres offered his collection in 1867, took over the building from that time. A room next to the (delightful) tea room is devoted to he history of the museum. 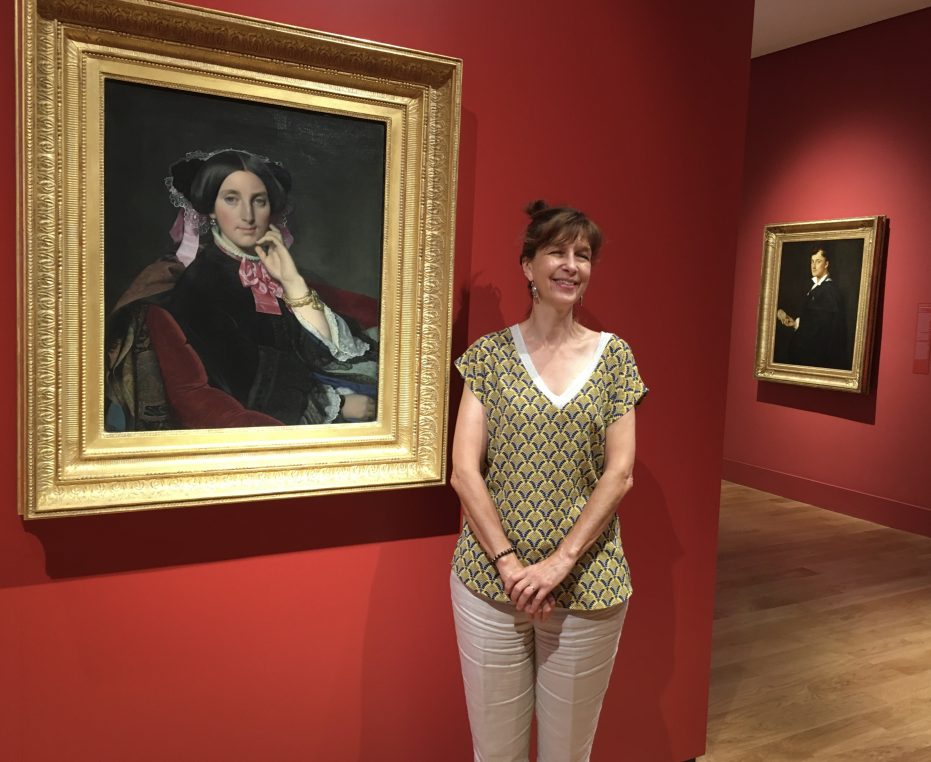 Florence Viguier-Dutheil has been running the museum for twenty years. She is seen here in front of the famous “Portrait of Madame Gonse”, by Ingres, 1852. On the right, you can see “Portrait of Lorenzo Bartolini”, 1805

For the last ten years, Director Florence Viguier-Dutheil has been fighting for the renovation of the museum and nothing was easy. Bach Nguyen, the architect who won the competition, sadly died of pancreatic cancer after a few months of the construction work and his wife Stéphane had to take over. The few structural works which had to be done in this listed building were at first vetoed by the Monuments Historiques and thus the permit was delayed for a few years. These were mainly, the two beautiful and discrete glass pavilions in the courtyard and the extra floor (entresol) built inside the  monument on the second floor to provide space to see the 4 500 Ingres drawings. They were finally approved thanks to the patience and determination of the museum team. 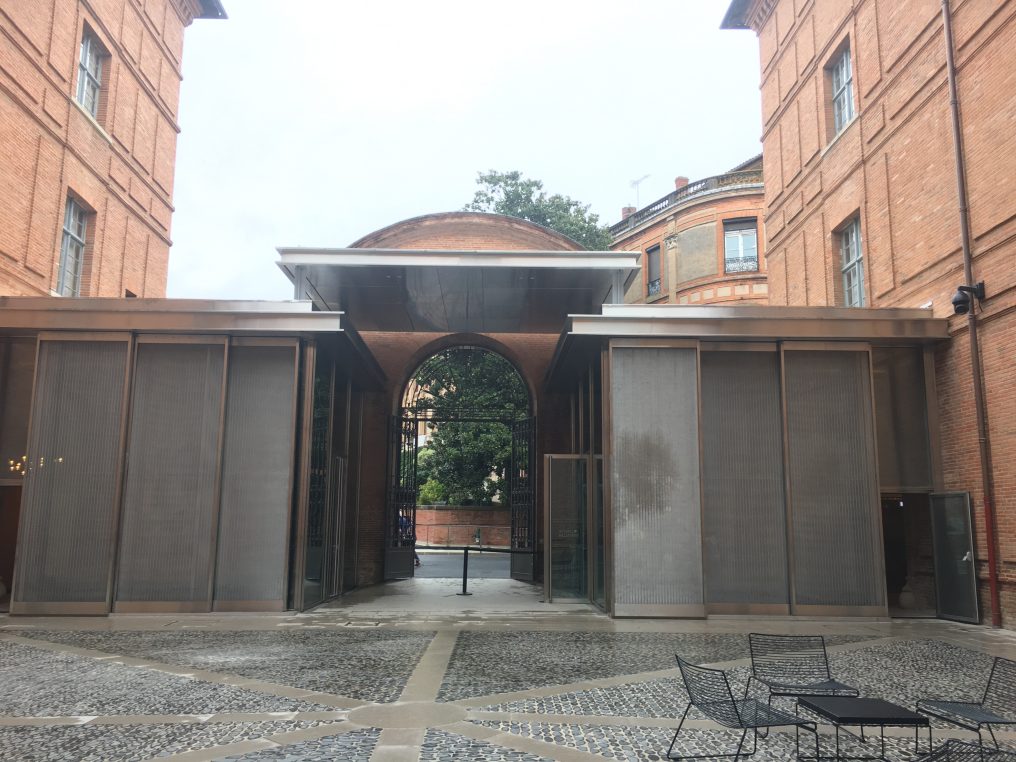 Even in the rain, the brick looks happy! here the two glass pavilions conceived by Bach Nguyen

I enjoyed watching a short video on the website of the museum where the glass manufacturer is shown installing the cubes. At the entrance of the galleries, a short exhibition called “Constellation” gives an introduction to the work of both Ingres and Bourdelle with examples of their followers. The Louvre, Musée Picasso, Rodin and Bourdelle have lent some important works including “Portrait of Paul as Arlequin” by Picasso inspired by Ingres, and Martial Raysse’s “La Grande Odalisque” an acrylic from 1964. The painting in this section which struck me the most was “Madame de Loynes”‘s portrait by Amaury-Duval. He was a student of Ingres and a parent of Chassériau, she was a famous courtesan. 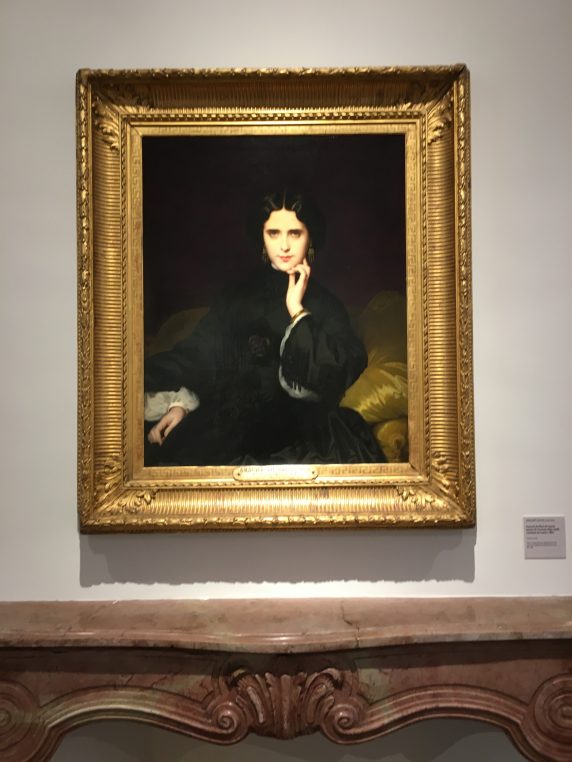 After seeing Ingres’ early works, the decor of his house, his personal paintings and the different portraits of his family  and friends, it’s quite wonderful to understand his fascination for Raphaël and for Italian painters whom he knew well because he lived in Rome for many years first as a student then as the director of Villa Medicis (1835-1841). There is a charming painting by Jean Alaux showing him playing the violin in his Roman studio in 1818. 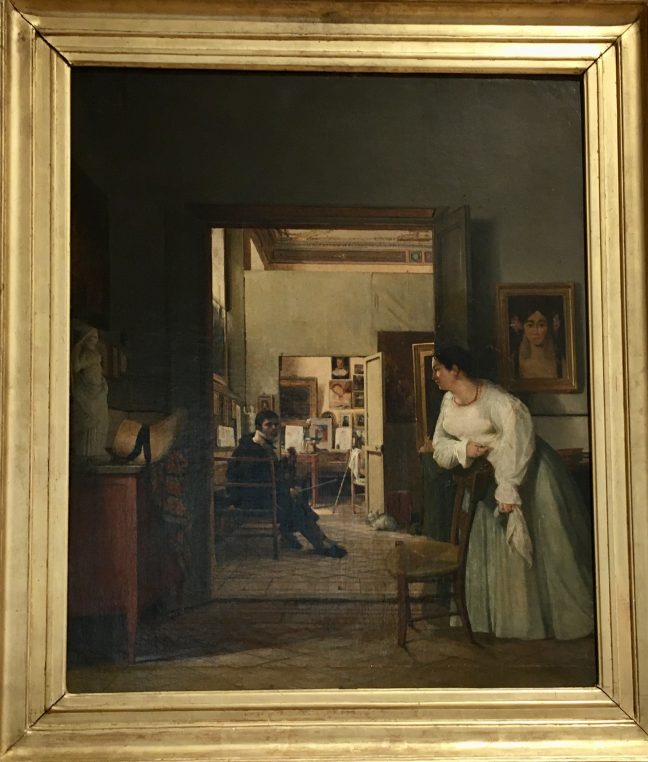 It is worth taking the time to go through the drawings which are kept in large wooden chests designed by Bach Nguyen. They are all fascinating and through them you get to revisit some of the most famous portraits like “Portrait of M. Bertin” or “Le Bain Turc” which you can go and see again at the Louvre afterwards… His own collection of Italian early paintings like Masolino Di Panicale or a copy of Raphaël’s Cross bearing, are illuminating. A room dedicated to his disciple and executor Armand Cambon, who became director of the museum, is also very interesting. But of course it is Chassériau’s incredible nude of a flying black man which is the attraction of the last rooms of the museum. 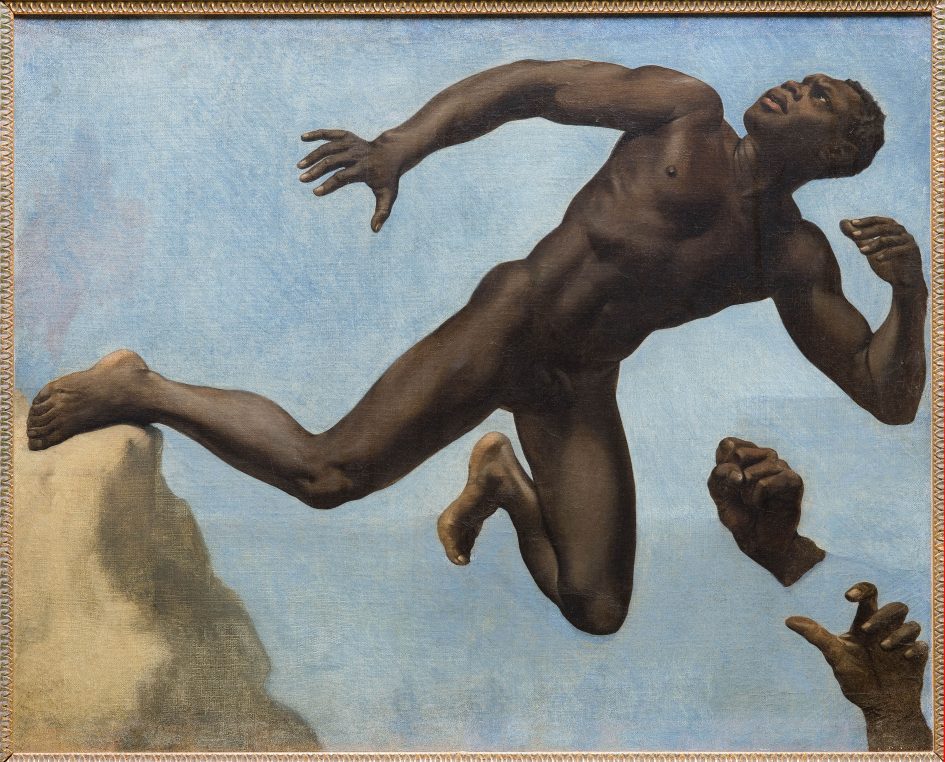 There are many nudes inspired to his followers by his odalisques and a wonderful Saint Jérome by José de Ribera. I particularly liked the high ceiling room with large formats including Jean Pierre Franque‘s “Jupiter asleep in Juno’s arms on mount Ida” ca 1821. It could well be used by today’s feminists who would be happy to see a tamed Jupiter, fully contented after lovemaking in his dominating mistress’s arms. The painter was a sheep keeper who engraved rocks in the countryside. Thanks to an aristocratic lady who was crossing his village, he was introduced to Jacques Louis David who taught him for free. He eventually painted a decor for the Elysée Palace. This large painting was recently taken out of the reserve and restored and shows remarkable clashes of color between reds and pinks. 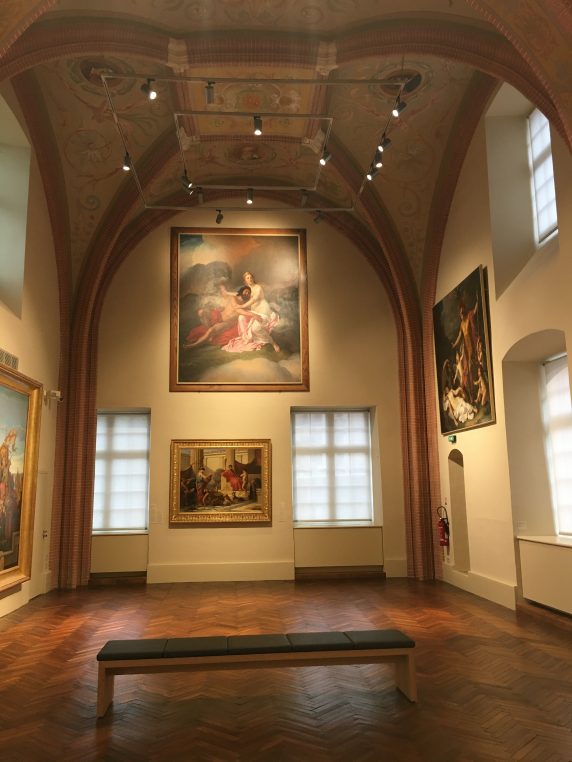 A whole floor is dedicated to sculptor Bourdelle, also a Montauban born (1861) artist,  who admired Ingres and is represented through 68 sculptures and many drawings. His bust of Emile Garrison and Professor Rousset, of Beethoven, Rodin and Rembrandt, complement a large plaster of Herakles archer, and his projects for Théâtre des Champs Elysées. The musée Bourdelle  and studio in Paris is also a  must. 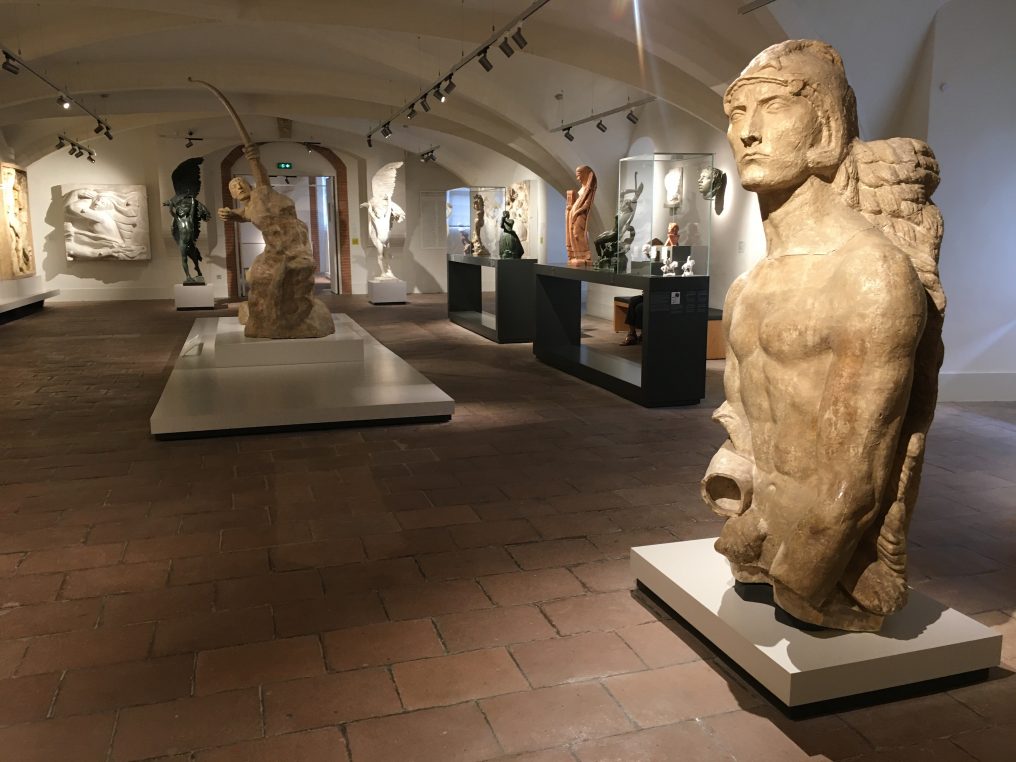 Downstairs, the foundations of the building hide a large cave where you can discover archeological pieces and a video  installation, “L’oeil de la machine” by Miguel Chevalier until December 15. 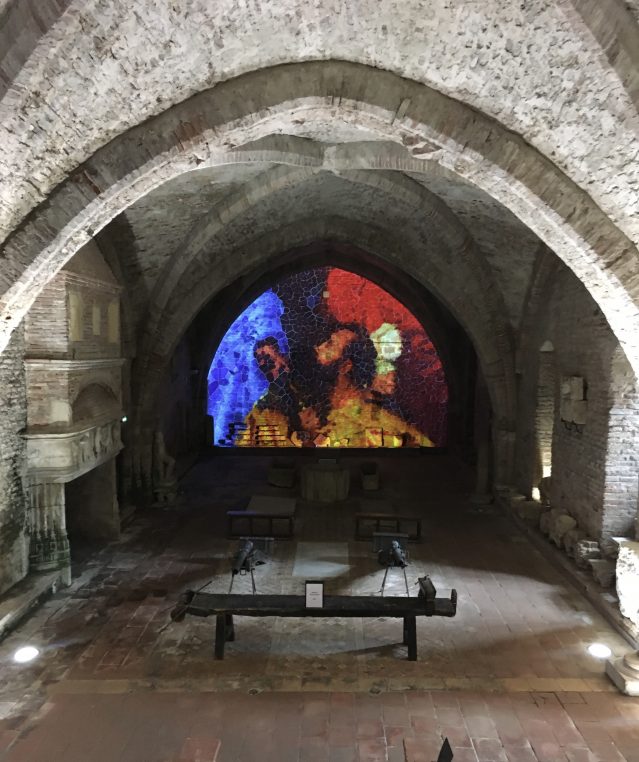 The visit ended with a nice tea and cakes (from the nearby Alexandres patisserie) in the pretty cafeteria where Florence Viguier told us about next year’s exhibition around Philippe, Duc d’Orléans, King Louis Philippe’s eldest son, who was prematurely killed in an accident in 1842. You will have understood by now that this museum is much more than an exhibition place for Ingres and Bourdelle. It tells the story of their careers which both started in Montauban, their attachment to their town and the vivid image they have left. I tis all about the city’s greatness.

Musée Ingres Bourdelle, Montauban. There is a train from Paris Montparnasse which reaches Montauban in 4 hours and the town is ideal for a week end visit.

5 Comments on “In Montauban, Ingres is the master”