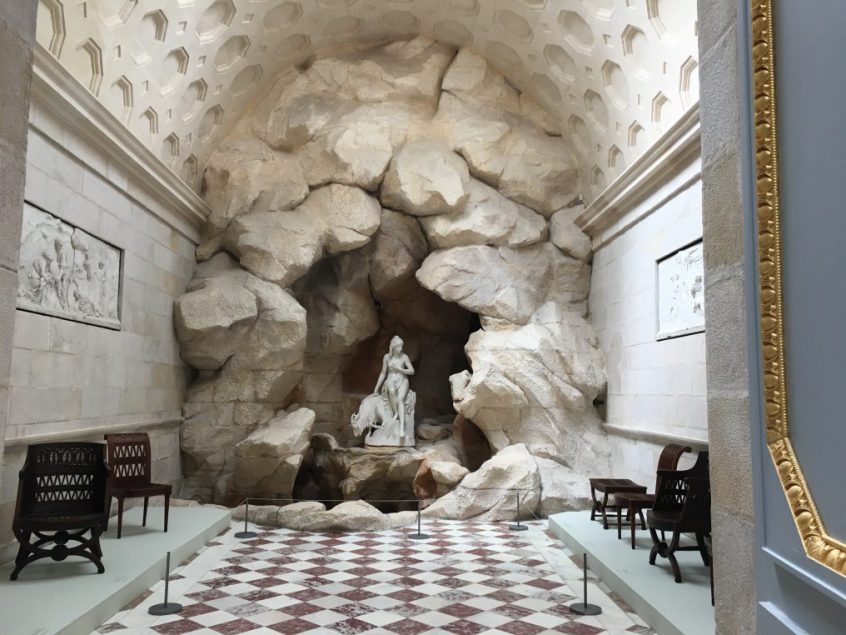 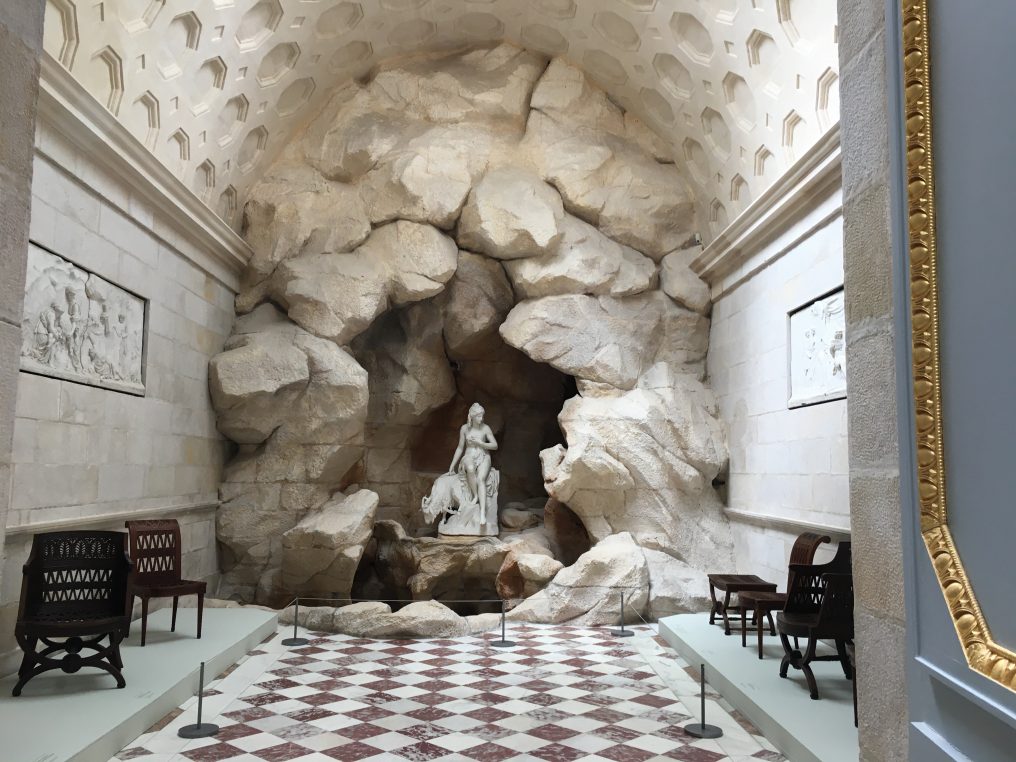 Château de Rambouillet is not the most interesting building in the world but this new exhibition, “Vivre à l’Antique“, curated by Gabriel Wick  and Renaud Serrette, makes us discover fantastic wood panelings and la Laiterie, a building conceived by Louis XVI with painter Hubert Robert to lure Marie Antoinette into this hunting lodge which the king loved particularly of its rich reserve of animals. The Queen only came once but this little jewel of a building gave the occasion to Sèvres porcelain manufacture to create ravishing cups with cows, goats, sheep and tits supported by goat heads. It also inspired beautiful marble medallions by Pierre Julien on the theme of milking, butter making and breastfeeding. All of this with a Greek and Roman influence.

Etruscan cups and breast like bowl made by Sèvres in 1787, © Éditions Monelle Hayot – photo Alo Païstik

When you think that the French Revolution was only two years away, it is even more exciting to discover the Antique revival of the Laiterie, the temple of milk, with its  large white marbles dedicated to Almathea who is represented with Jupiter’s goat as his nurturing goddess. Louis XVI was so keen on this project that he imported special Merinos sheep from Spain and transformed an aesthetical gesture into a farming experience thus emulating George III in England who was nicknamed “Farmer George”. The luxury and detail of this creation are fascinating. On top of the marble sculptures, a series of furniture was designed by Hubert Robert and made by Georges Jacob in mahogany,  a wood which was mostly used in England at the time. 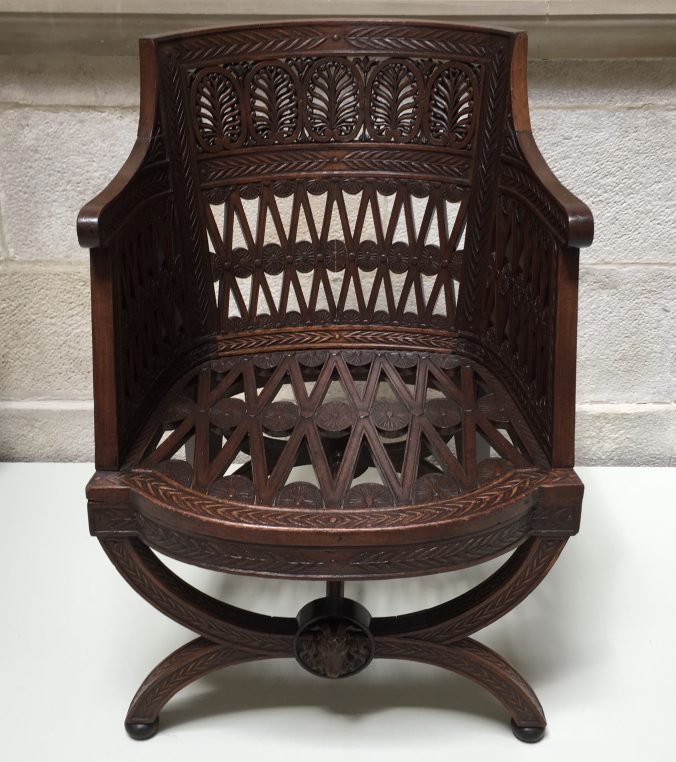 The visit of the exhibition actually starts in the castle, after you climb a staircase with a heavy pretentious carpet ordered by President Giscard d’Estaing, a keen hunter,  when he used the place for his Presidential shoots.  The stunning first room shows a large panorama of Rome as seen from San Pietro in Montorio, made in 1779 by Louis Le Masson. This 463 cm long work is made of five painted papers and is in a private collection. Antique and modern monuments are represented side by side with a certain geographical freedom. It is the same artist who realized the Abbatial palace in Royaumont (property of Nathaniel de Rothschild) and a parish church in Courbevoie built during the Revolution!

Facing the panorama is a large painting by Hubert Robert, the champion of Ruins and Antiques, called “View from the harbor of Ripetta”, where the painter combines different monuments that he particularly likes like the Pantheon, a Palace and the harbor of Ripetta. And in the center of the room, stands a spectacular model of the Coliseum made of cork. A few models and plans show the different projects conceived by Louis XVI  for additions to the castle of Rambouillet. 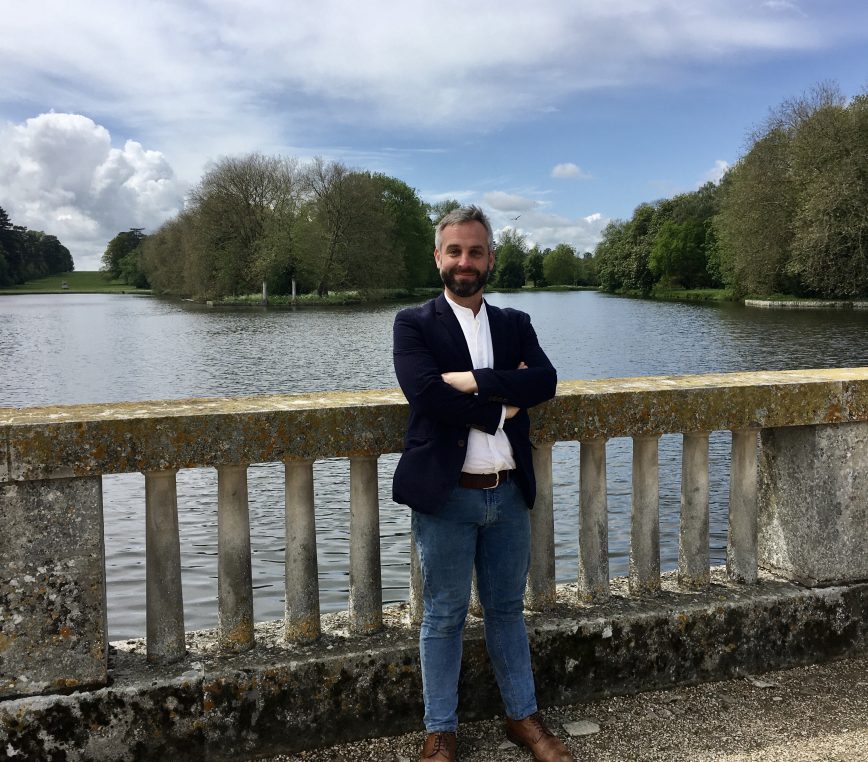 Gabriel Wick, curator of the show, stands in front of  the perspective created by Hubert Robert whose parks he has studied in depth

In the following wood paneled rooms, a large decor of arabesques by Pierre Cietty was lent by Féau, the specialist of wood paneling and furniture, clocks, porcelain all inspired by antiquity are shown in the stupendous rooms. Some black Wedgwood vases are shown to outline the extreme competition which existed between the different manufactures at the time and also showing the common fashions inspired by Greek ceramics. On their Grand Tour, English and French travelers had the occasion of discovering the digs of Herculanum and Pompei in the 18th century and came back with a taste for Etruscan cups and Roman sculptures. When the Dauphin was born, in 1781, Angiviller, the director of the King’s buildings, ordered a statue of the Queen as Venus with bare breast which was delivered for Christmas at Versailles. The Queen disliked this gesture and forbid him to have the statue made by Sèvres.  The example we see in the sow was executed in 1938… 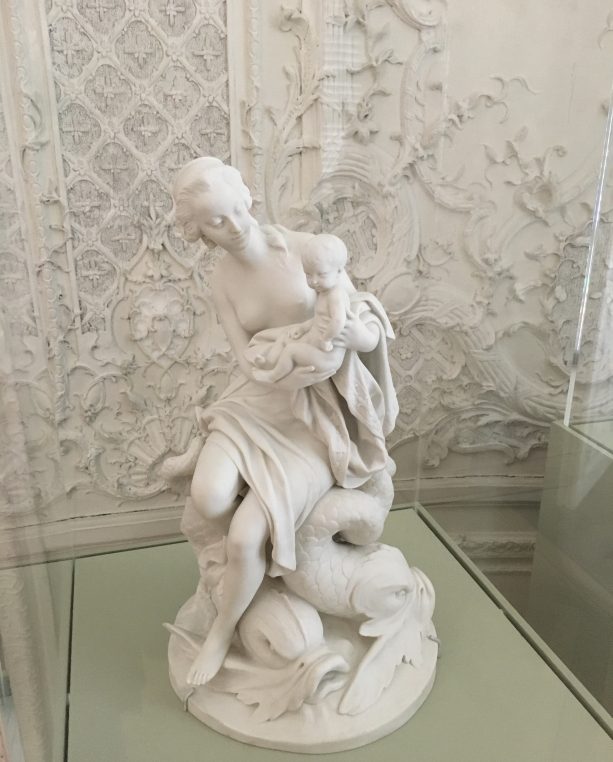 Augustin Pajou, Allegory of Marie Antoinette as Venus after the birth of the Dauphin, 1938, Sèvres porcelain, Musée de Versailles

Later in the exhibition, we see Napoleon’s bathroom which is permanent in Rambouillet, a pure neoclassicist gesture. Also a group of furniture lent by Banque de France, was made for the bedroom in pure antique style with the head of Jupiter. 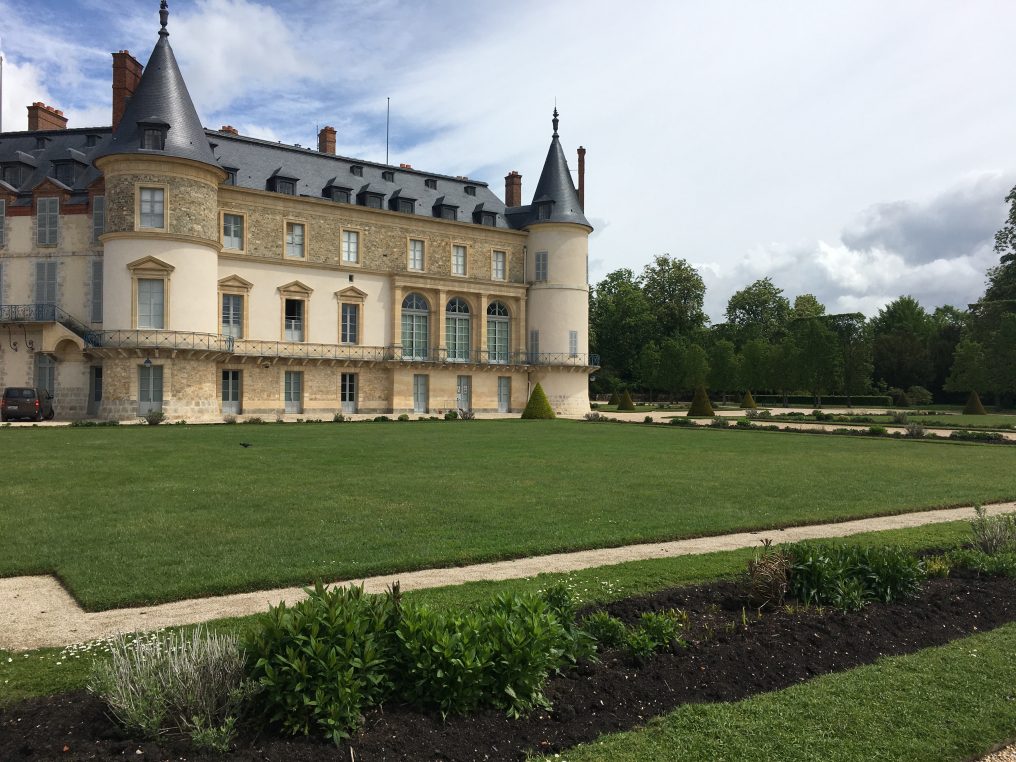 This visit at Rambouillet can be planned as a walk in the park with a pic nic on one the benches as much as a travel through Antiquity. The exceptional surprise is obviously the Laiterie (milk temple) which is getting its original furniture and porcelain back for the first time since its creation. And it’s interesting to understand the agricultural ambitions of Louis XVI, with the hothouses, animal reserve and farm designed especially at Rambouillet.

A remarkable catalog is published by Monelle Hayot (39€) and the exhibition is on until August 9. Rambouillet is accessible by train or by car in one hour and you can drive around the large park. Le Centre des Monuments Nationaux is co-organiser of the exhibition.

2 Comments on “In Rambouillet, antiques make a come back with Gabriel Wick”