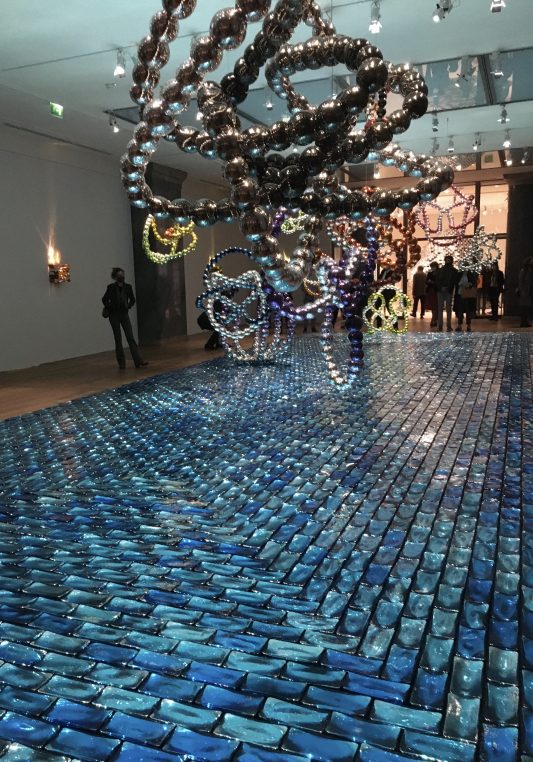 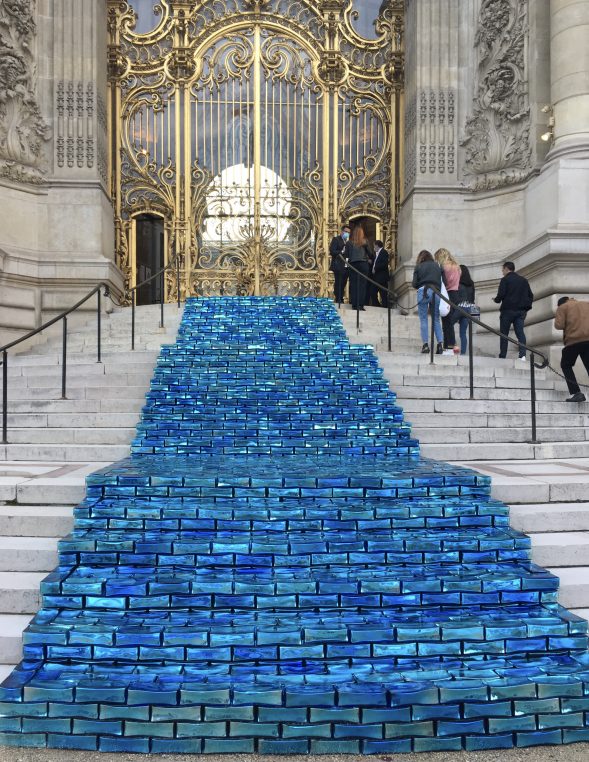 Walking up the steps of Petit Palais has become a new experience since Jean Michel Othoniel has disguised them with glass blue bricks made in India, with the artisans of a glass village near Agra, and walking around its lush tropical garden is more fun with the gold sculptures and necklaces which adorn the palm trees and small ponds. These are a mini version of the fountains which garden designer Louis Benech had commissioned him to do in Versailles in 2015, for the Bosquets du Théâtre d’Eau. But his decor of the “The Narcissus Theorem” downstairs, remains slightly “Christmasy” even though these wild knots were conceived with a Mexican mathematician Aubin Arroyo who teaches at UNAM in Mexico City. The piece I really liked is the large glass suspension over the back staircase which will remain in the museum since both Othoniel and his gallerist Emmanuel Perrotin have offered it to Petit Palais. It had been created twenty years ago in a forest in Holland. 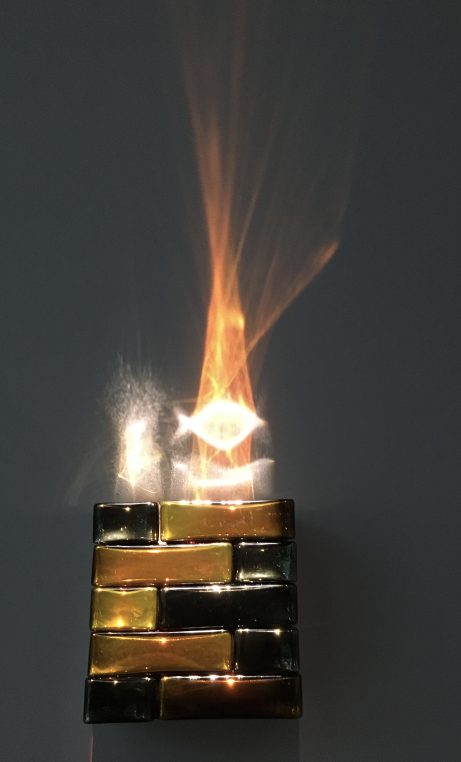 The opening on Sunday night was particularly happy because of the many young children enjoying the glitter of the glass pearls and large blue brick platform on the lower floor of the museum. This glass artist whom I first discovered in 1982 at Galerie Axis, where Laurence Dumaine-Calle had asked him to create plates, has gone a long way and developed his glass beads for the Paris Metro Palais Royal station and also, more recently, for Angoulême’s cathedral sacred treasure. There is something fun and decorative about his sculptures and suspensions.  This exhibition is free and perfectly adapted to a large public which Le Petit Palais lacked so much before Christophe Leribault opened it up to contemporary interventions (such as Jeff Koon’s tulips) and association with FIAC. By the way, since Leribault has become President of Musée d’Orsay, he wears navy blue suits and no more his beige jeans… Will he soon wear a tie? 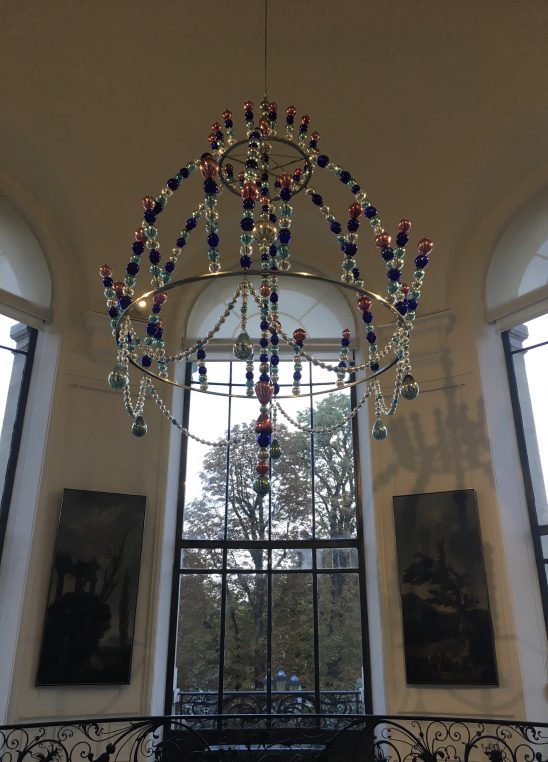 It just happens that Othoniel’s life companion, the Belgian Johan Creten, a major artist himself, has designed for Diptyque‘s 60 th anniversary, a candle “La Laguna”, inspired by Venice’s smells, which, when melted, uncovers a little statue of a siren. This is part of a series of candles developed recently by the company around travels, with eight artists such as Hiroshi Sugimoto, Ange Leccia, Joël Andrianomearison… 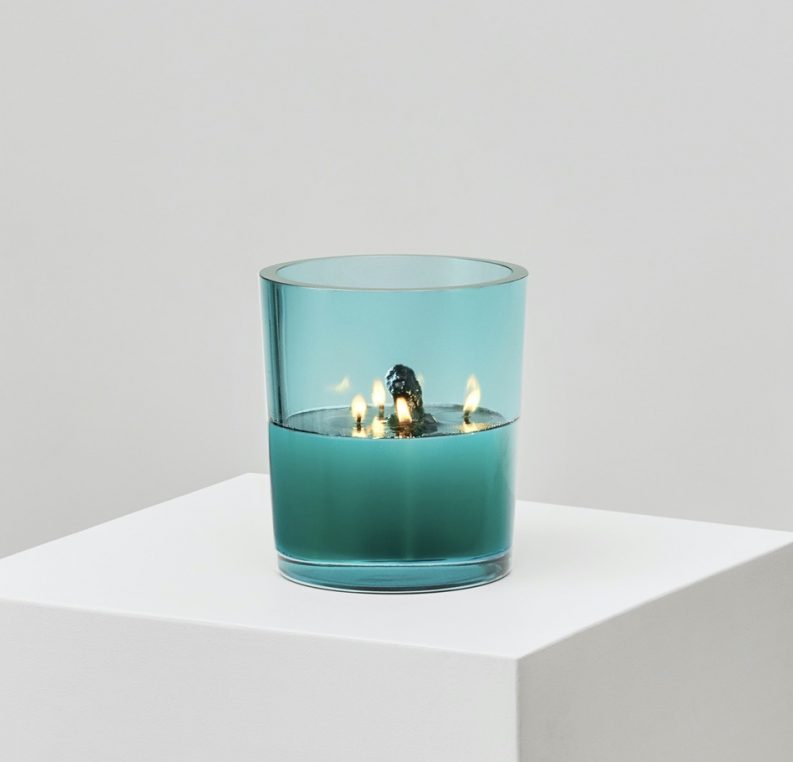 The major event of the week was the performance at Centre Pompidou of Valérie Mréjen and Mohamed El Khatib, “Gardien Party”, a hilarious piece acted by real museum guards which had come from St Petersburg Hermitage museum, The Louvre, the Mucem in Marseille, the Noguchi Museum in Brooklyn, MoMA in Manhattan and the Modern Museet in Stockholm. After hundreds of interviews, the two directors wrote a text for each guard who sits on a chair and tells his story, his interactions with visitors, his love for art. The Russian lady knits all along the performance and has a thermos of tea and a box of cookies which she generously distributes to her colleagues during the show. 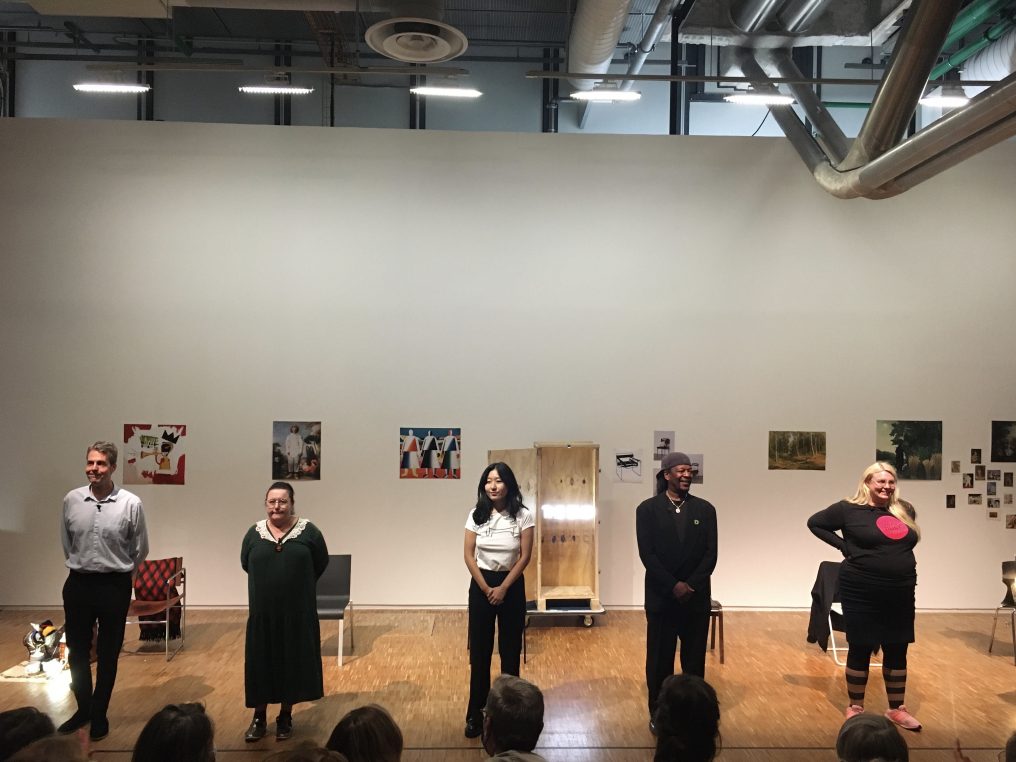 The Louvre, The Hermitage, the Noguchi, MoMA, and the Modern Museet in Stockholm

The Korean guard is slim and charming and talks about the visitors’ behavior just like the French one from the Louvre who quotes American tourists: “We have seen the Mona Lisa, now we would like to see the Joconde”. The most hilarious is the Russian guard who says that spending ten hours a day in a heated museum is much more fun than being alone at home. The American guard from MoMA is more real than life and criticizes the vigils hired from outside the museum who are “so close and yet so far” from the works of art.

They are all generally forbidden to inform the visitor on the works but sometimes do because they have heard the conferences so often that they know… At the end, a night guard appears who is a former dancer from the Paris Opera and works at Mucem in Marseille. He talks beautifully about the pleasure of watching the paintings alone at night. The play ends on a pretty image where he puts a box of cookies under a lamp in Christophe Boltanski’s style. The evening I went, Annette Messager, his widow, was in the assistance.

The 75 mn show is hilarious and unfortunately has left Centre Pompidou but you can grasp it at Musée des Beaux Arts in  Rennes this week (28 September until October 2 ) or later in Rome, Italy, at the Romaeuropa festival (8 to 10 October) and at Louvre Lens on 25 to 28 November. The performances always take place in a museum of course.