It’s rare to enter an exhibition of photographs and to be mesmerized. Of course, you rarely have the conjunction of  an amazing space, the Bibliothèque Nationale de France with its huge heights, a brilliant photographer Josef Koudelka, and a team of scenographers (Jasmin Oezcebi), researchers, curators as high in quality. This show “RUINS” of 110 panoramic prints (124 cm X 260cm) took thirty years to prepare, was shot in twenty countries around the Mediterranean sea,  with 200 archeological sites. And Josef Koudelka gave all but three photographs to the Library. Very elegant. 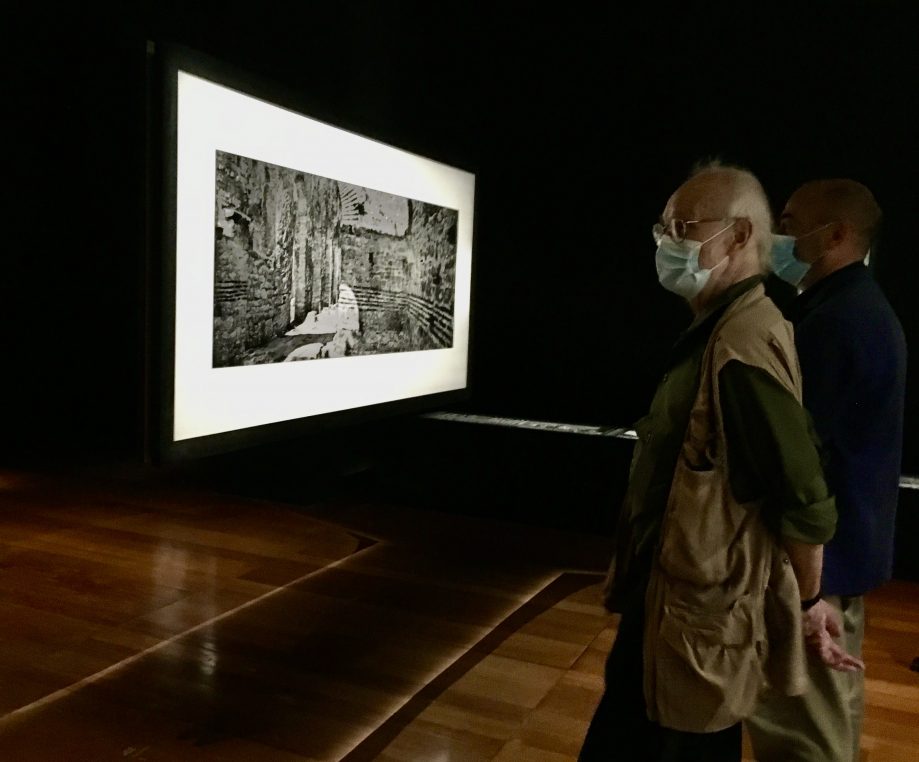 Joseph Koudelka at the opening

It helped that Bernard Latarjet was an old and close friend of the Czech photographer who is a member of the Magnum agency. He financed the whole enterprise himself and prints were done by Picto, the famous lab.  And it is an honor for France that after leaving Tchecholovakia in 1970 and living in London, exhibiting at MoMA in New York in 1975,  he chose to settle in our country and became French in 1987. He was first made famous by his photographs of the Soviet invasion of  Prague in 1968 and his study of gypsies. Henri Cartier-Bresson, Robert Delpire, Xavier Barral  were his first friends. He developed the panoramic format when he went around France photographing landscapes for the DATAR at Latarjet’s instigation.

“Ruins do not represent the past, they are the future which invites us to pay attention and to enjoy the present. Everything in Europe is linked to the Mediterranean, everything around us, one day will be ruins” is the sentence which opens the exhibition. Josef Koudelka shares with us the intimacy of the place. He inspects every fragment of stone and sculpture and gives us his vision of the ruin today. In her very clear presentation, the curator, Héloïse Conésa, outlined three points of Koudelka’s passion for ruins.  “The attitude to timelessness that they suggest, the common civilization that they represent, and the type of visual composition that they allow”.

Large formats are hanging in the dark in a spectacular way

The areal display of the pictures is extraordinary. They surge from the dark floating in the air, for the larger formats. Smaller horizontal prints (40cm X 120cm) are set on knee high-cabinets, while all the vertical prints hang on the walls, in dyptics and tryptics, in a more classical way. Walking into the space feels like entering an enchanted forest of black and white treasures. Pictures were shot in Albania and Bulgaria, Slovenia and Sicily, but mostly in Turkey and in Greece. One is taken in Evora, Portugal, more in Tunisia, Morocco and Algeria. All have their particularity and special vision. In 2018, Koudelka had his own retrospective at the National Gallery of Prag. 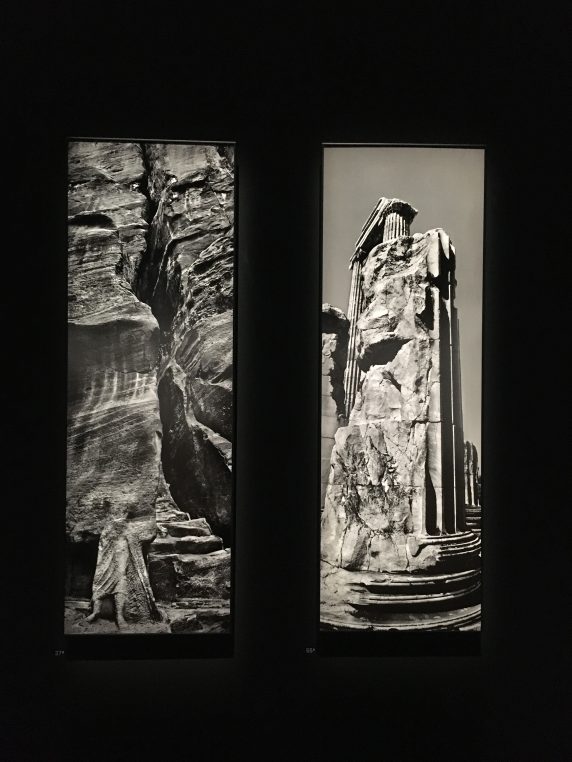 “This is the largest photo project ever made without a sponsor, entirely financed by the photographer” mentioned Bernard Latarjet. And the show itself was minutely directed by Koudelka. Every detail of every picture was tracked down to the point that he returned many times to get the right light or the right angle for some of the images.

The catalog with a text by archeologist Alain Schnapp is published by Xavier Barral. The exhibition is only until December 16 at BNF  (closed on Mondays) and the best way to get there is on the metro line 14. Do not miss it.

3 Comments on “Josef Koudelka is magic at BNF”