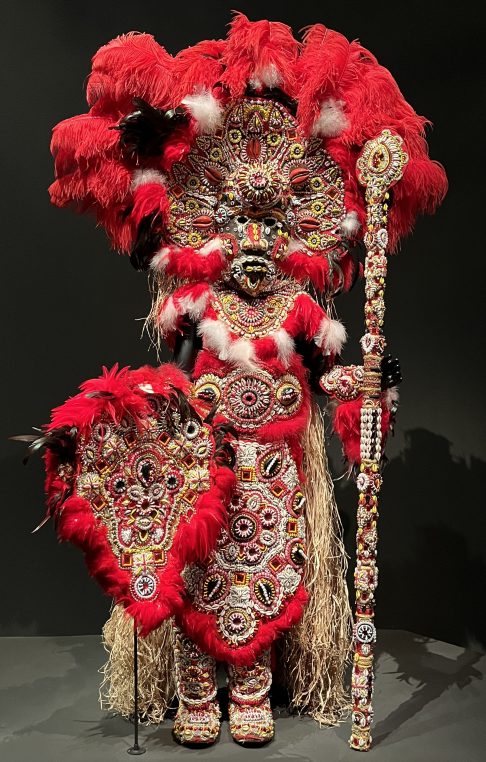 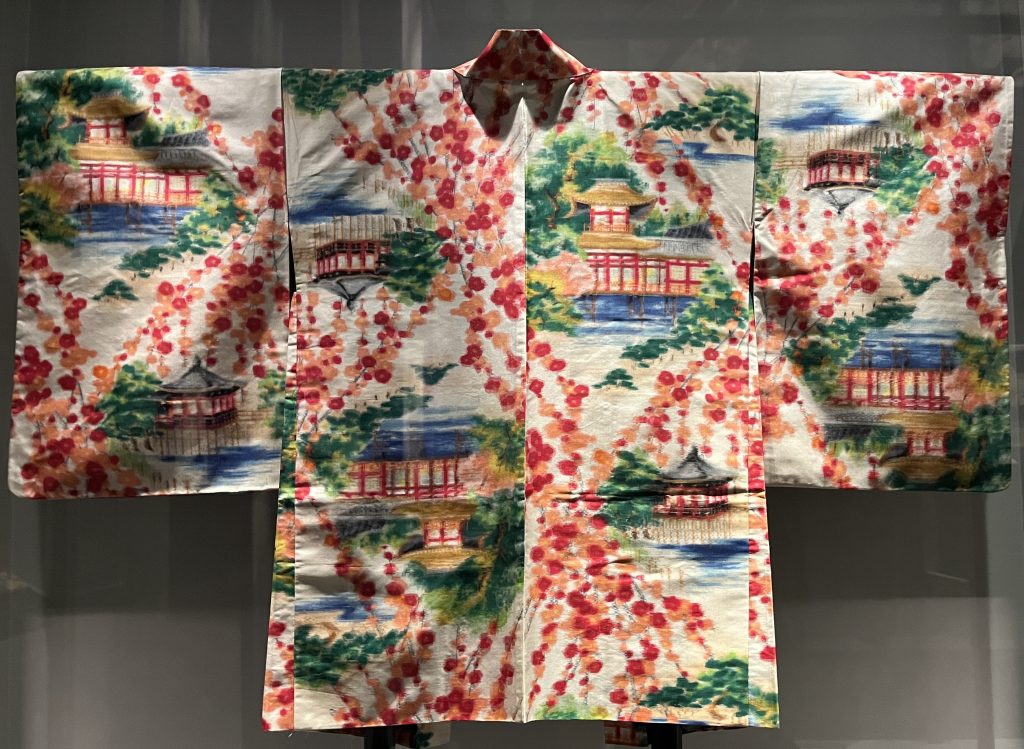 At Musée du quai Branly Jacques Chirac, an exhibition of 19 th and 20 th century kimonos is illustrated with great prints in teh small first floor galleries (until May 28) while Mardi Gras costumes from New Orleans, decorate the ground floor galleries (until January15). Both shows are a fireworks of color which warmed me up on a recent freezing day.

Victor Harris spirit of FI YI YI and Big chief of Mango Warriors, “Eyes of the Fire”, collection of the artist

“New Orleans Black Indians”is not very a focused show: it includes Philippe d’Orléans’ guarantying the monopoly of Louisiana the  Compagnie d’Occident which established trading posts along the Mississippi but also many contemporary carnaval costumes realized by the artist Victor Harris. New Orleans was founded by Jean Baptiste Lemoyne de Bienville in 1718 and built by African slaves, Canadian military and deported Acadians. The New France included a large part of the North American territory between 1534 and 1803. The trade of slaves included 12 million men in a triangular trade between Africa, Europe and America and was developed by England, Denmark, France, the Netherlands and Portugal. Goods such as gold, tobacco, sugar, coffee and cotton were brought back to Europe. 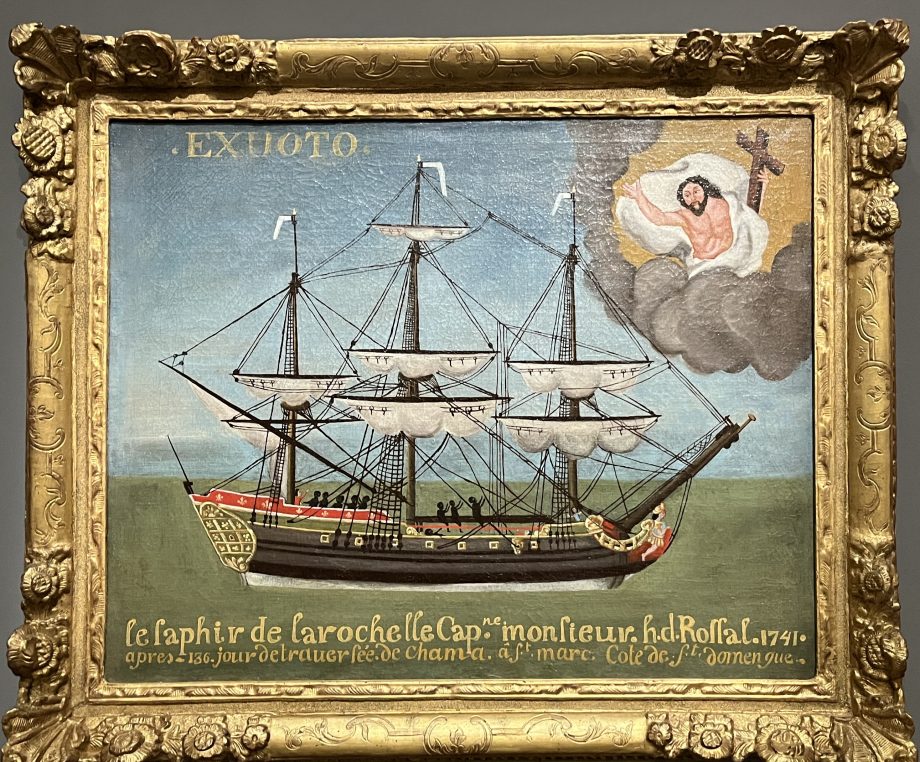 The slave trade is the second part of the exhibition with some explicit paintings of torture but also of the “slaves’ social life” around dance and music. The first successful slave revolt in Santo Domingo, led to the establishment of the Haïtian Republic in 1804 and also to an emigration of 15 000 inhabitants who fled to New Orleans, thus doubling the population by 1810. With them they brought vaudou which is illustrated by a pretty flag representing Saint James/ Ogou Ferail, his vaudou counterpart. This is when the slave ownership system started officially in the US and a terrifying register of the Jasper Gibbs plantation is shown in the exhibition. 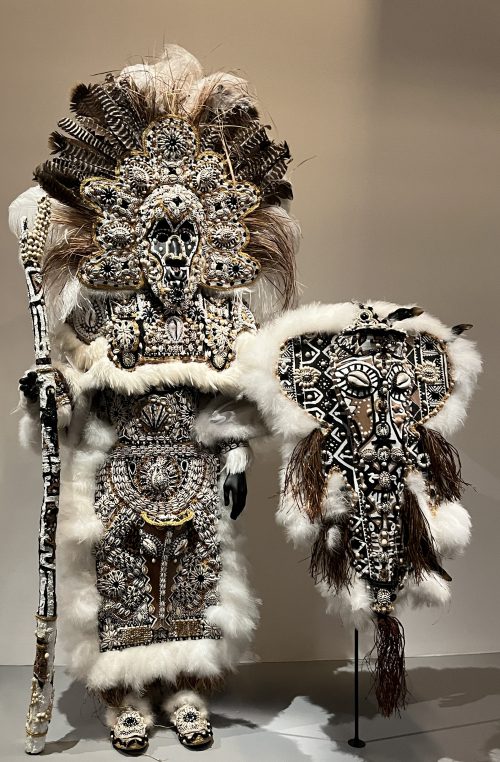 Victor Harris spirit of FI YI YI and Big chief of Mango Warriors, The Spirit in the Dark, 2022, Collection of the artist

The end of the exhibition is devoted to the carnaval’s costumes and the post Katrina social aid and pleasure clubs in New Orleans. The costumes are amazing with their mix of shells, colored beads and feathers. One comes out of the exhibition slightly puzzled… The slave trade and colorful Mardi Gras costumes, Cavalier de La Salle’s expeditions in the 17 th century and Gorée, the island from where slaves embarked. All these topics are only superficially dealt with and the strongest impression which remains is that of the crazy disguises made in 2022 by Victor Harris… ( until January 15) 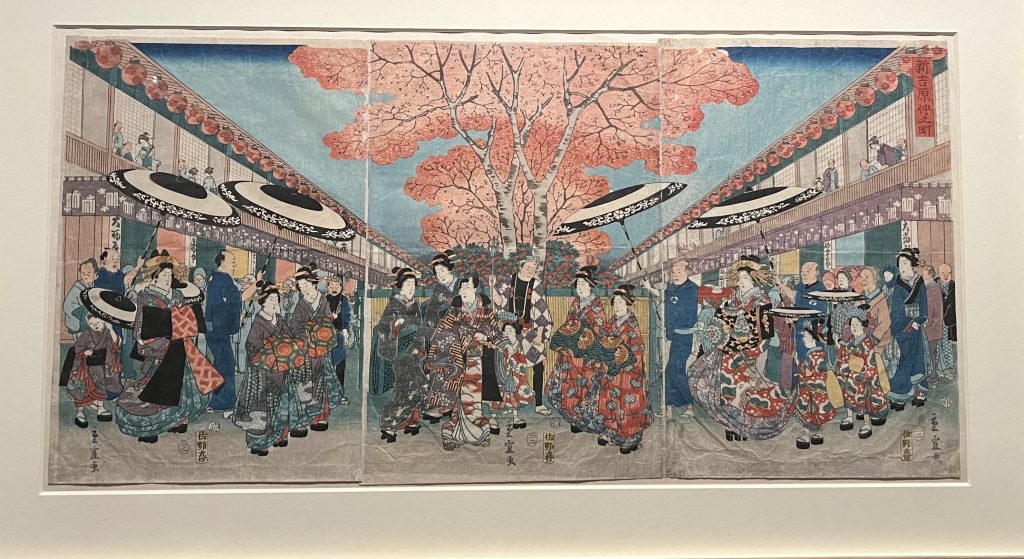 In the kimono exhibition upstairs, what I found most interesting was the rendering in paintings and prints of the way these traditional costumes were worn in the 19 th century. Their influence on French fashion designers  and artists is also interesting, The department store Liberty was selling kimonos in London while Monet and  Whistler dressed their models with them. The kimono influenced Madeleine Vionnet and Mariano Fortuny who ordered silk inspired by Japan to the Lyon manufacturers. 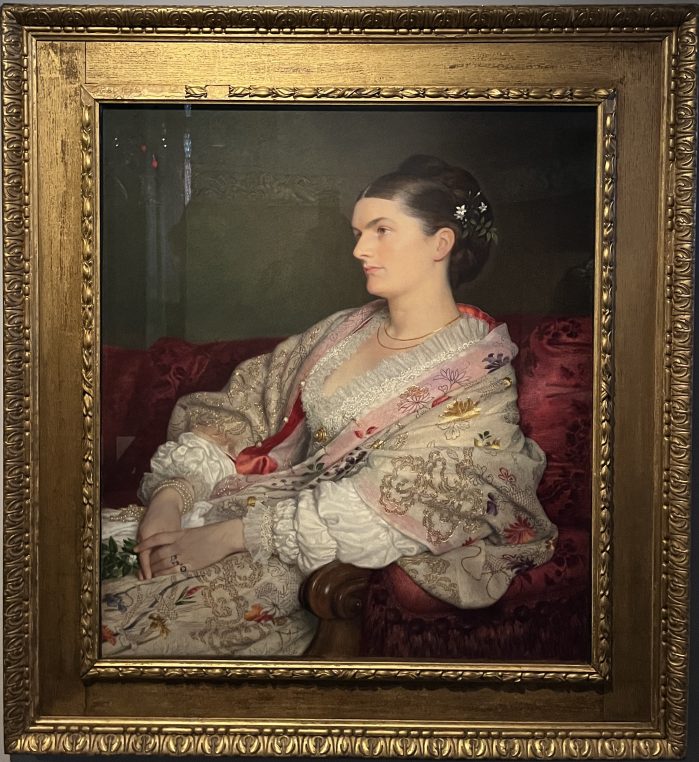 The portrait of Elisabeth Smith, the wife of publisher George Murray Smith, wearing a kimono is even more interesting because her kimono is also shown in the exhibition. It dates from 1800-1850 and was destined to be sold to foreign visitors. A man’s kimono with patriotic scenes from 1905 is exhibited as well as baby born kimonos which were used for the introduction of infants in Shintō sanctuaries, thirty days after their birth. As always, costumes tell the history of the country. 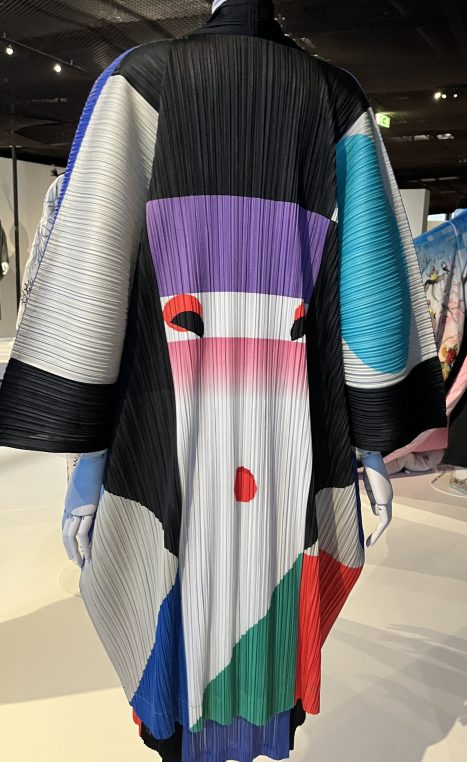 The show ends with a delightful Issey Miyake coat and dress inspired by the kimono fashion. How did this 17 th century invention remain until today is a mystery but the kimono definitely defines Japan. The visit is pleasant although the pieces are hard to see in the windows with multiple reflections and glass partitions in the middle. The galleries are small so don’t rush during the Christmas vacations  when the crowds of tourists will choose to see it.

Until May 23, Musée du Quai Branly.