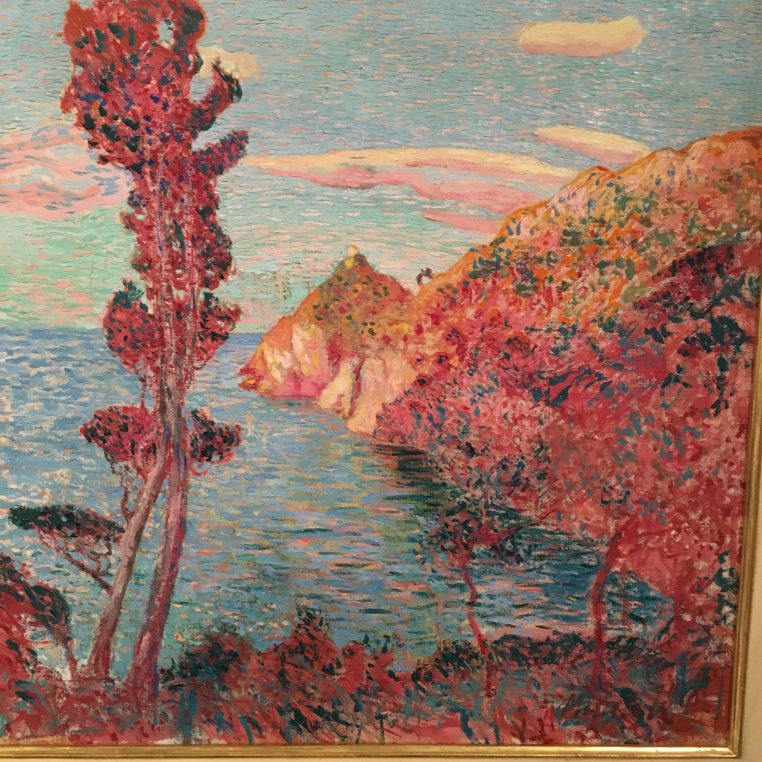 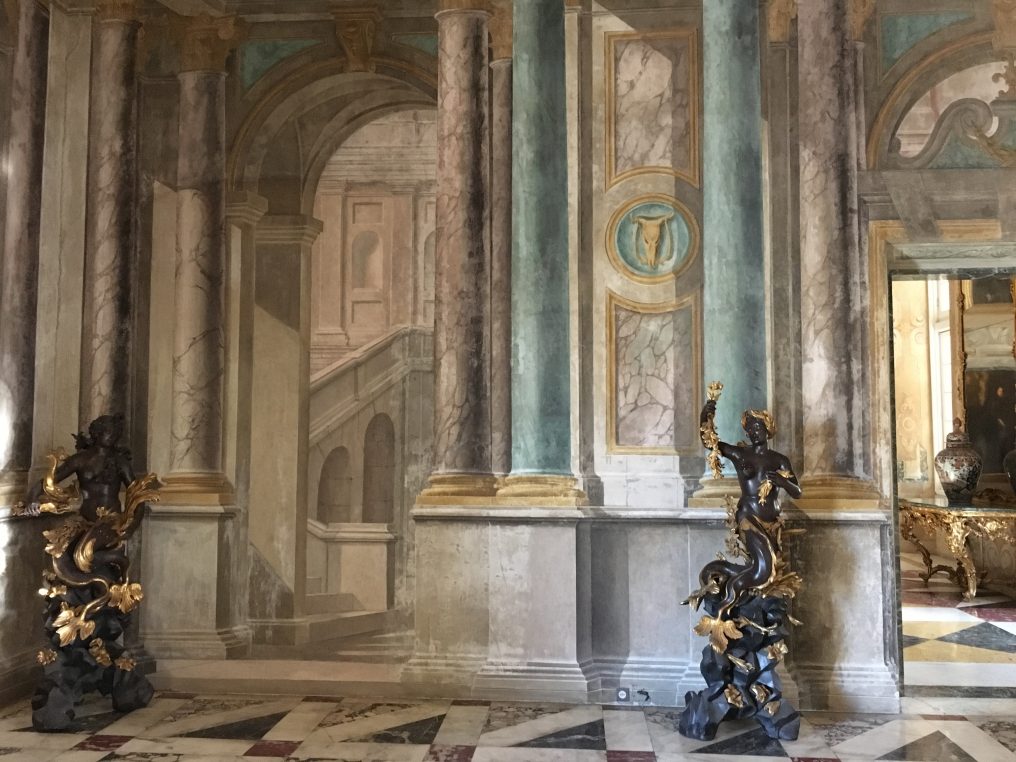 On the top floor of Palazzo Rosso, frescoes and trompe l’oeil. The palazzo was given by its owner Duchess de Galliera to the town and it is now a museum

The occasion was the wedding reception for Serena Cattaneo Adorno with Thomas Repelski and I would not have missed this long coveted visit to Genoa for anything! On the 75 mn flight from Paris, guests to the wedding conversed with Cecilia (formerly) Sarkozy, who was visiting the shipyards with her husband Richard Attias and young art collectors who wanted to see the beauty of this Mediterranean harbor, one of the most powerful in the world in the 16 th century thanks to Christopher Columbus. 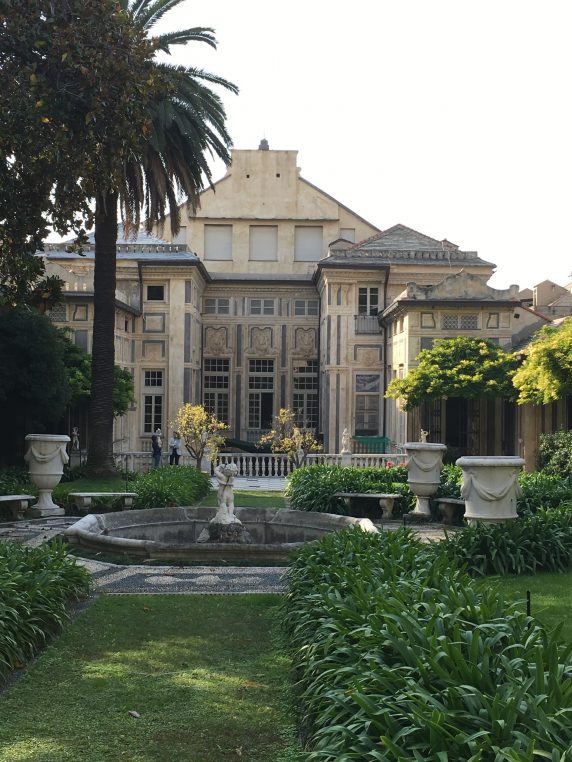 After a fifteen minute taxi ride you reach the historical town which is small and one walks everywhere like in Venice, for cars are discouraged to enter. My first visit was for Palazzo Ducale, to see the Rubaldo Merello (1872-1922) exhibition. I learned about Divisionism in Italy, a movement between Pointillism and Symbolism. Merello, as Gianni Franzone, the curator told me, spent all his life near Portofino, in San Fruttuoso and La Ruta. After showing in Paris in 1907 with divisionist Italian painters, he retired to this village and painted in almost complete isolation until he died at 50. 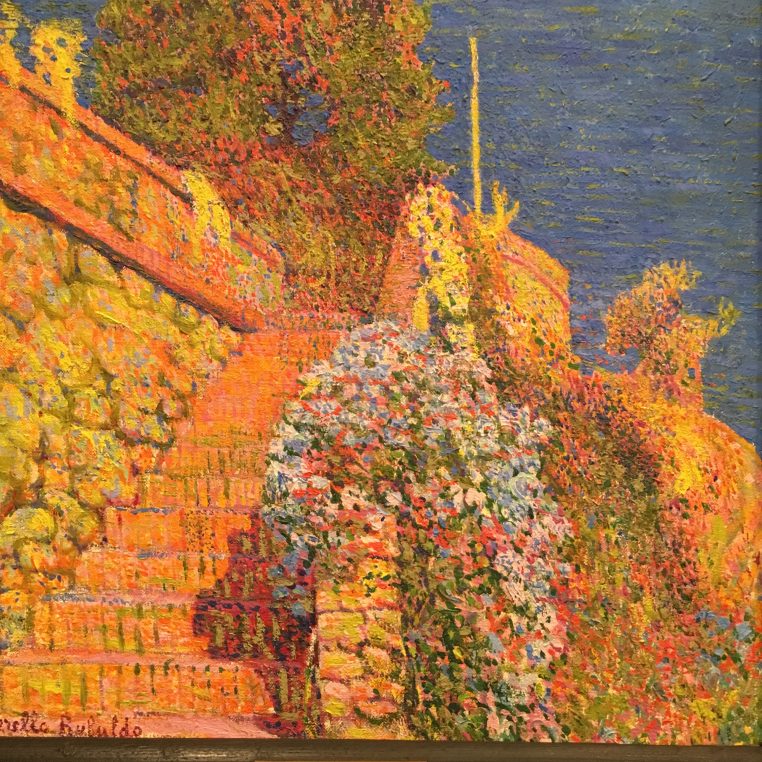 His themes are obsessional, the Mediterranean coast with its pine trees, boats, and sea views and the convent of San Fruttuoso. His landscapes and nature in general become more and more introverted in his paintings and he uses color (like Bonnard and Edward Munch) in a very wild way. I had never heard of this Divisionism movement, of Giovanni Segantini and Gaetano Previati who are also shown here and wish they could travel to Paris soon. The quality of the paintings and their surprising effects are astonishing. (until February 4)

From there I crossed the street to Chiesa del Gesù where two fabulous paintings were painted by Rubens, and many more by Guido Reni and Simon Vouet. I went back three times to enjoy the fabulous baroque ambiance of the church. 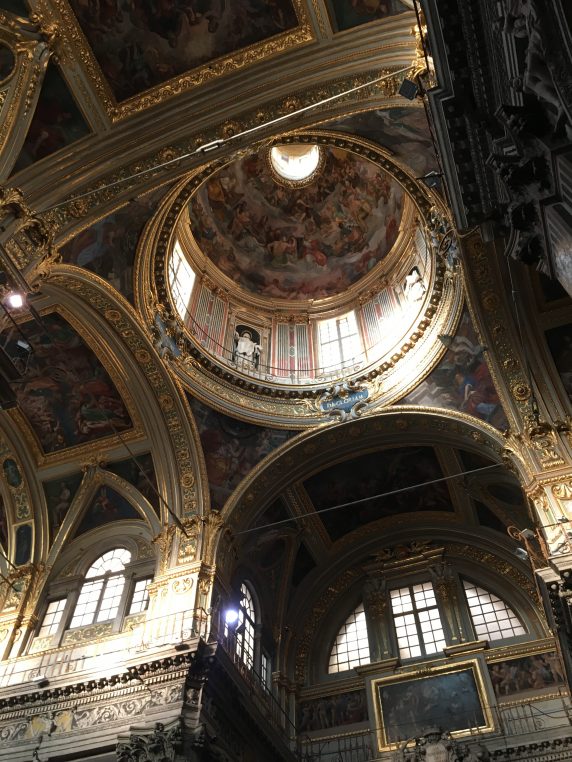 Wherever you look in Chiesa del Gesù, paintings enchant your eyes

A little further you can look at what is left of Christopher Columbus’s house. He is the great hero of Genoa with Paganini, whose violin you can see at Palazzo Tursi, architect Renzo Piano, Rinaldo Piaggio, inventor of the vespa and actor Vittorio Gassman. There was actually a Paganini festival going on in different palazzos in town. 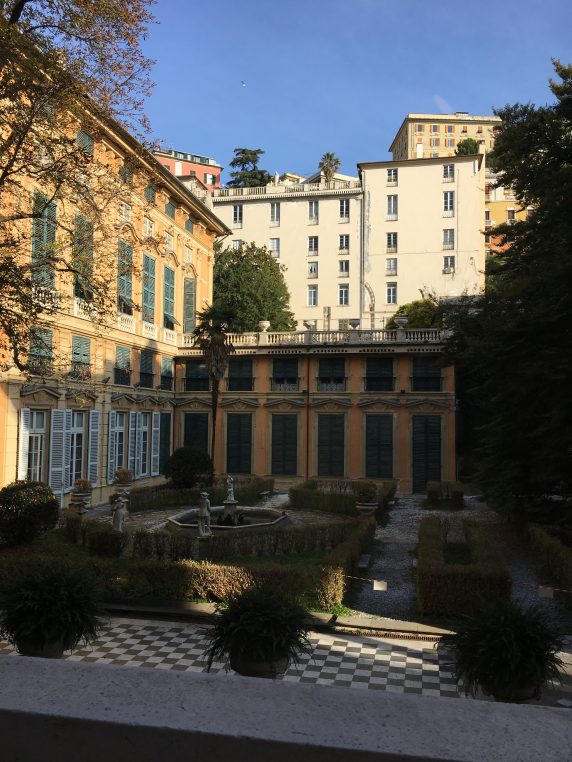 The view fromPalazzo Rosso into Palazzo Bianco, most gardens are on terraces on the first floor for lack of space

Via Garibaldi, the 250 m long former Strada Nuova, is the center of interest of course. Lined with XVI th century palazzos on each side, it has the most fabulous decors made to receive and impress visitors. It is very near the harbor and is the most luxurious image of Genoa’s empire. I loved seeing the frescoes and the Van Dycks on top of Palazzo Rosso, admired the gilt gallery of mirror (1744) copied on Versailles of Palazzo Tobia Pallavicino. In most palaces, which are converted in banks or offices, you can just walk in and ask to look around. 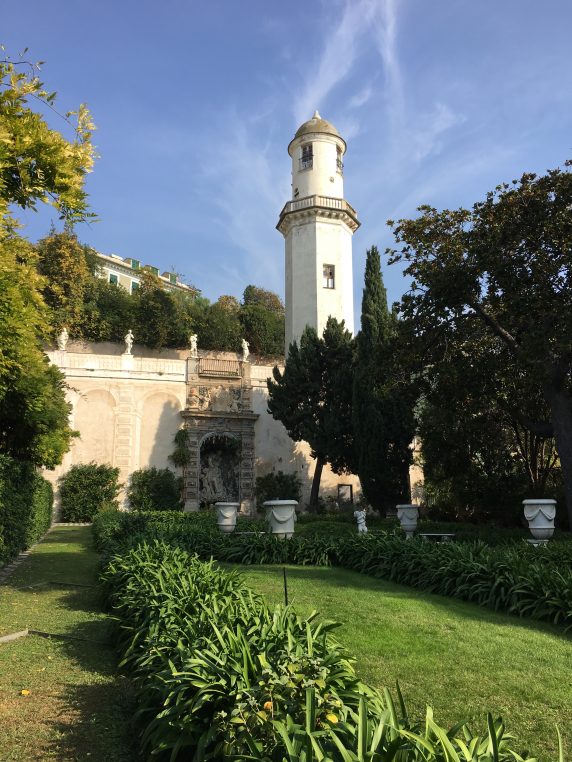 Palazzo Lomellino has an observatory and grottos on three levels

In Palazzo Lomellino, we saw the marvelous frescoes by Bernardo Strozzi which were uncovered in 2002. They represent the discovery of America and recount daily life on the new continent. Our host kindly took us around to visit the reconstruction of parts of the palace which had been bombed in 1942. Architect Emanuela Cattaneo successfully restructured the interior giving it old style proportions and wonderful modernity. She is also very active in Careyes where she is building a new hospital for the little Mexican village. And we also enjoyed the exhibition of baroque painter, Domenico Piola (1628-1703) which was superb. It goes on till January 7.

Carlo Bugatti, Coffer with arabic islamic influence, 1899 at the Wolfsoniana

My other adventure was to visit the Wolfsoniana, a museum in Nervi, a residential part of Genoa, dedicated to decorative and propaganda art between 1880 and 1945. It contains the collections of Micky Wolfson who  has another museum in Miami, the Wolfsonian. I was fascinated by four pieces of furniture among others, a coffer by Carlo Bugatti from 1899, a pyramidal bed « Ninive » by Alberto Fabbi and « l’Autarca » (autarcist), a chest made in 1935 by Angelo Fasce which contains everything you need for dinner. A mechanism of weights and counterweights brings up the food without anyone needing to get up. Murano glasses and bakelite plates designed by Richard Gonori come with it. 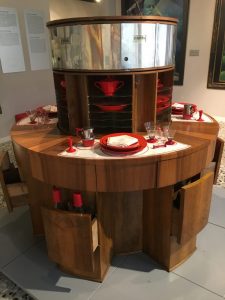 After a few fabulous meals at Sà Pesta, a very popular trattoria on via Giustiniani, and a delicious fish dinner at Capo Santa Chiara on a little beach where everyone was still hanging out in the mild October temperature, I ended my visit with Museo d’Arte orientale which has a surperb view over the harbor. There I loved contemporary Japanese artist Oki Izumi’s glass sculptures and the modern architecture of the building which contains collections assembled by Edoardo Chiossone at the end of the 19 th century. 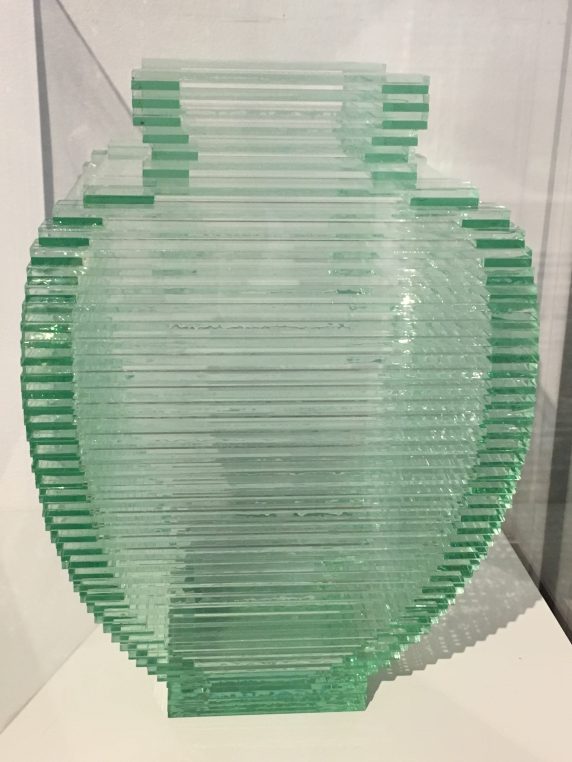 Oki Izumi, vase, 2016 at the Museum of Oriental art

Genoa is famous for its Via Garibaldi and 16 th century palazzos and for the beautiful resort of Portofino nearby,  but it has a lot to offer on top of this ! Now that the center right new Mayor, Marco Bucci, elected on June 25, 2017,  has taken over the city, streets are being cleaned and a new dynamism can be felt everywhere. It is a fabulous escapade and so easy to get to! I stayed at Hotel Bristol which is perfectly nice and central.

4 Comments on “Magical Genoa in 36 hours”