Make sure to book today to visit the new exhibition of Marc Riboud’s photographs at Musée des Arts Asiatiques Guimet (from December 15 th onwards),  a blockbuster show that we were all waiting for, for ages. It is the happy conclusion of Catherine Chaine Riboud and Marc Riboud’s children generosity. They GAVE 50 000 photos and documents to Musée Guimet in 2016 to preserve the photographer’s entire body of work. The exhibition features 300 photos (a hard selection to make) and is chronological from his first pictures in Lyon in 1940 to the last ones in China in 2010. His superb Afghan pictures of 1956 were new to me and of course, I loved seeing again his emblematic, “Painter on the Eiffel Tower” and the “Young lady with a flower” in the protest against the Vietnam war on October 21,1967 at the Pentagone. 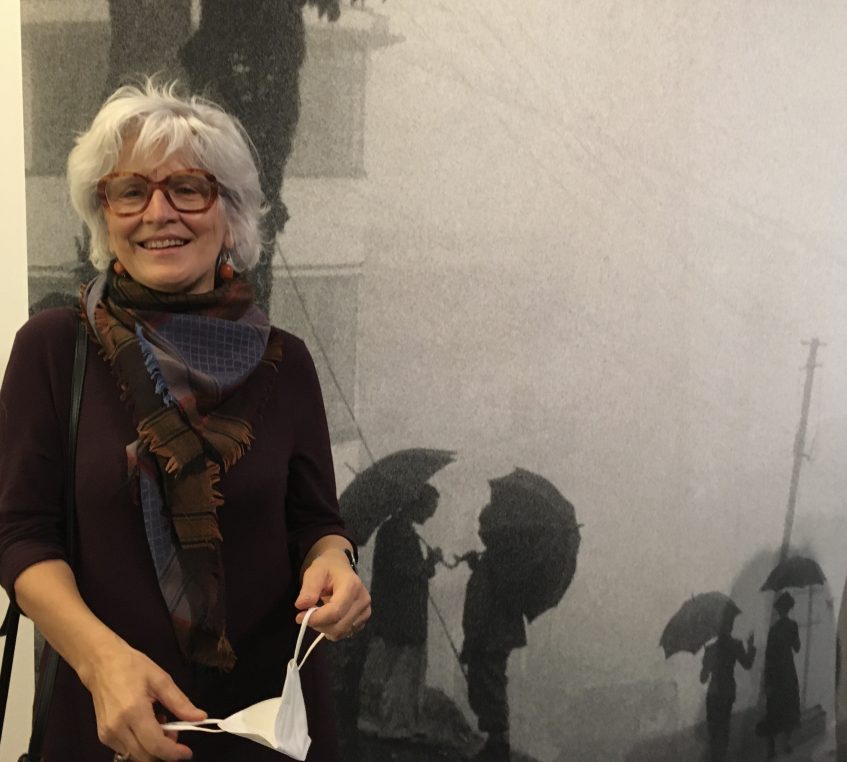 Catherine Chaine Riboud, his wife, was present in the show, with her flamboyant smile

Marc Riboud was a facetious man. I remember going with him to the festival of gardens at Chaumont sur Loire years ago when Catherine and he had a house in the Loire valley and he gave me one of these paper disposable cameras and ordered me to take photos of him shooting the gardens. I never saw the result but he liked to play. As we can see here in this very large exhibition, his photographs are often whimsical except when they are dramatic. The first ones are shot in Lyon where he was raised in a family of successful industrialists. Because he was very shy and silent, his father, who was keen on photography himself, told him: “You  don’t speak but maybe you have an eye”, and he gave him his first Leica.

The young girl with a flower, demonstration against the Vietnam war, Washington D.C. October 21, 1967 © Marc Riboud / Fonds Marc Riboud au MNAAG (this is one of the rare color photographs of the collection)
An avid traveller, Marc Riboud, 1923-2016, spent years touring Asia and America, but also Algeria and Africa. The fifth of a family of seven children, he decided to leave early and to travel after he completed his engineering school. He was in Yugoslavia and Croatia in 1953 for the Magnum agency which he had joined thanks to Capa and Cartier Bresson who admired his picture of the painter of the Eiffel Tower  He then spent a year in England and some of his pictures there, whether in the poor city of Leeds or at the British museum, are memorable. He followed Winston Churchill’s intervention in Blackpool, photographed the dockers on strike in Liverpool and demonstrating in Hyde Park, but also visited the British museum and captured gentlemen on the street. He is already a man of contrasts. 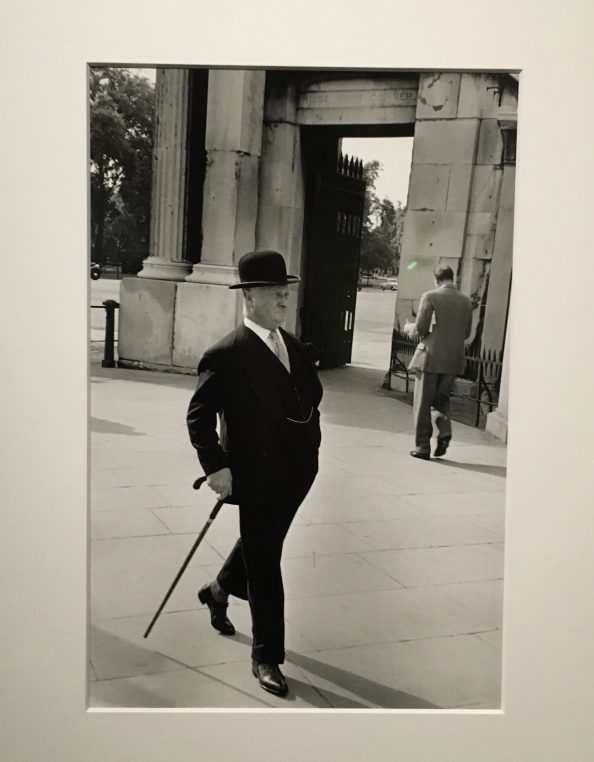 Turkey, Afghanistan, Pakistan, India by road and finally his first of many trips to China fill up the late 1950’s. His curiosity and very special eye enabling him to photograph workers as well as young starlets, people on the streets and politicians. His views of Chinese landscapes are famous but so is his shot of French journalist Jean Daniel interviewing Fidel Castro in Havana, at the very moment of John Kennedy’s assassination on November er 22, 1963. 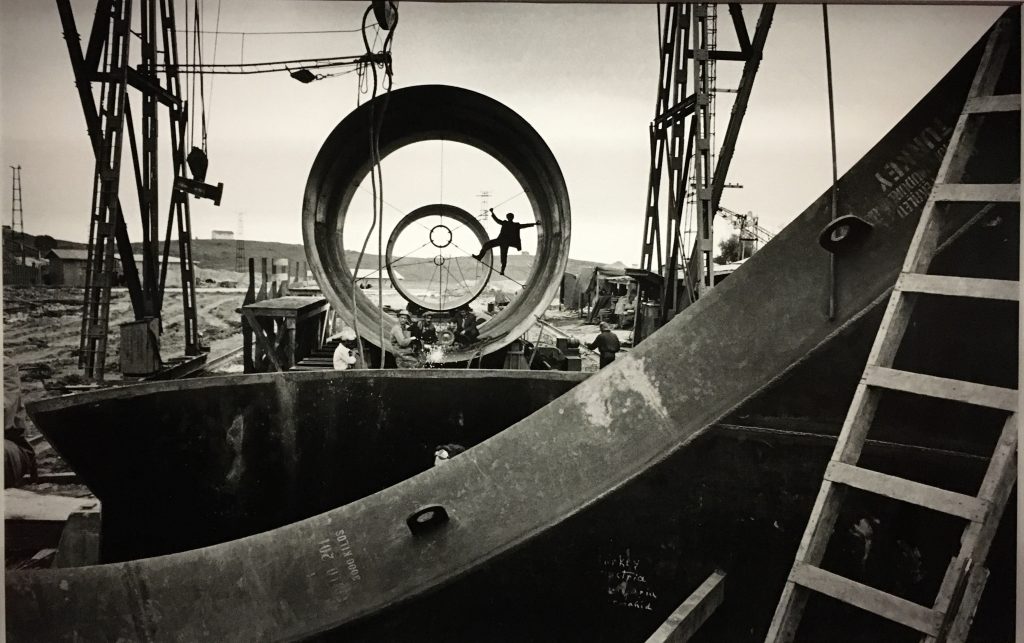 Construction of the hydroelectrical damm in Seyhan Turkey, 1955. The man hanging on the turbine is a repeat of the painter on the Eiffel Tower shot in 1953 © Marc Riboud / Fonds Marc Riboud au MNAAG

There are many wonderful things to say about Marc Riboud who was so kind and generous till the end of his life. He used to have visitors in his apartment near the Luxembourg and would spend hours showing them his pictures and telling the story of how it was shot. I remember visiting him on my way back from Siem Reap where I had been so struck by Angkor Vat. He patiently showed me hundreds of his shots of the tropical forest surrounding the sculptures. 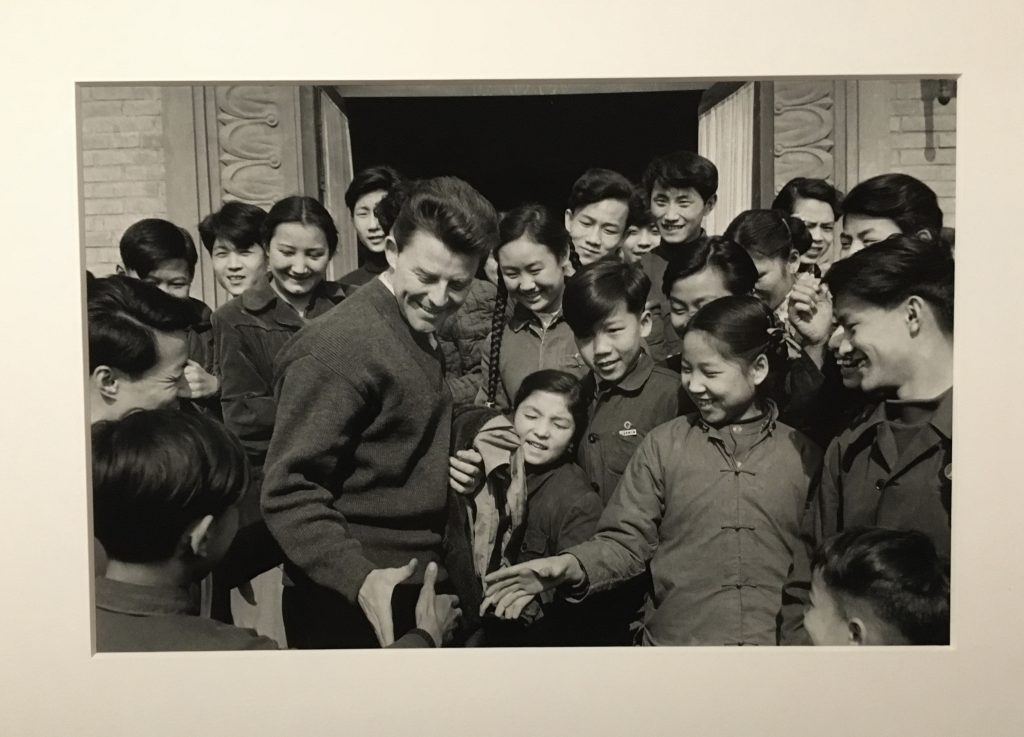 He was curious of everything and photographed Pierre Jeanneret‘s buildings in Chandigarh, India in 1956, but also the sculpted buddhas of Banyan, Afghanistan or 93 year old painter Qi Baishi in China after he was awarded the International Peace Prize. Japan, Alaska, Vietnam follow with a unique picture of Chairman Mao’s bed in Yan’an, China, in 1965, and scenes of the destruction of old Chinese cities. 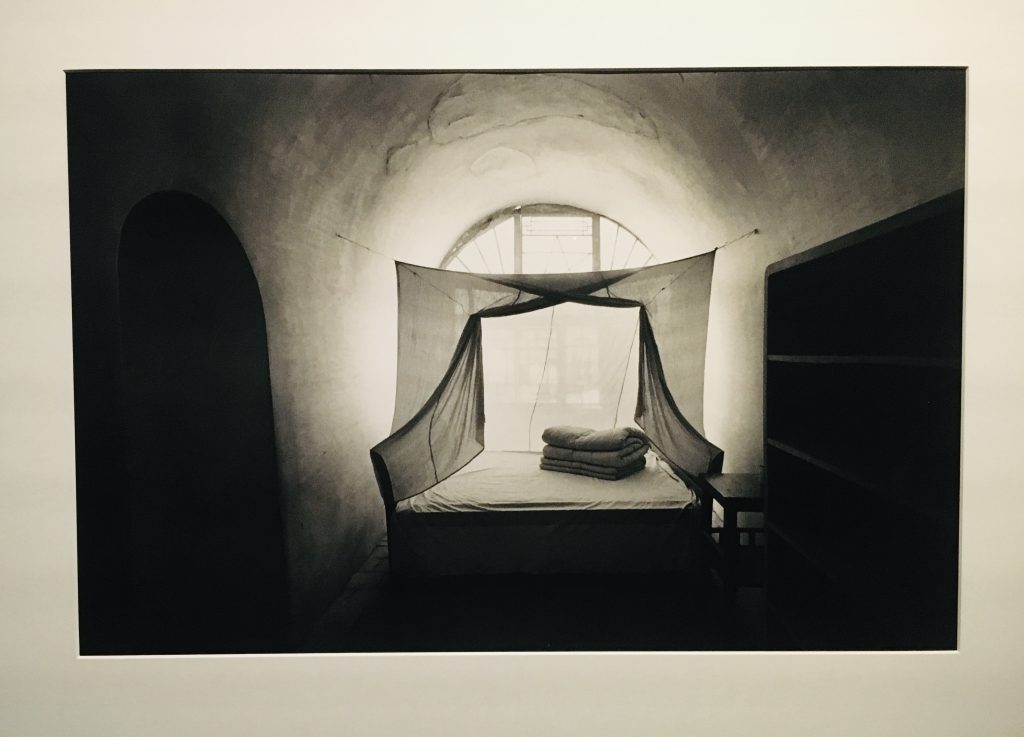 This exceptional exhibition at Musée Guimet, was co-curated by Lorène Duret, who has worked closely and for many years with Marc Riboud. She is the director of l’Association des Amis de Marc Riboud (now housed at Musée Guimet) and is in charge of organizing future exhibitions around the world. Catherine Chaine also worked hard on this event with the team of MNAAG. This show makes us travel in a past world where Marc Riboud’s elegant eye transforms everything into poetry. It is an uplifting moment and it gave me new wings to confront the semi lockdown. Since teh exhibition is not opening before Christmas, you can always buy the catalog online. It’s really wonderful with a text by Catherine Chaine Riboud among others.