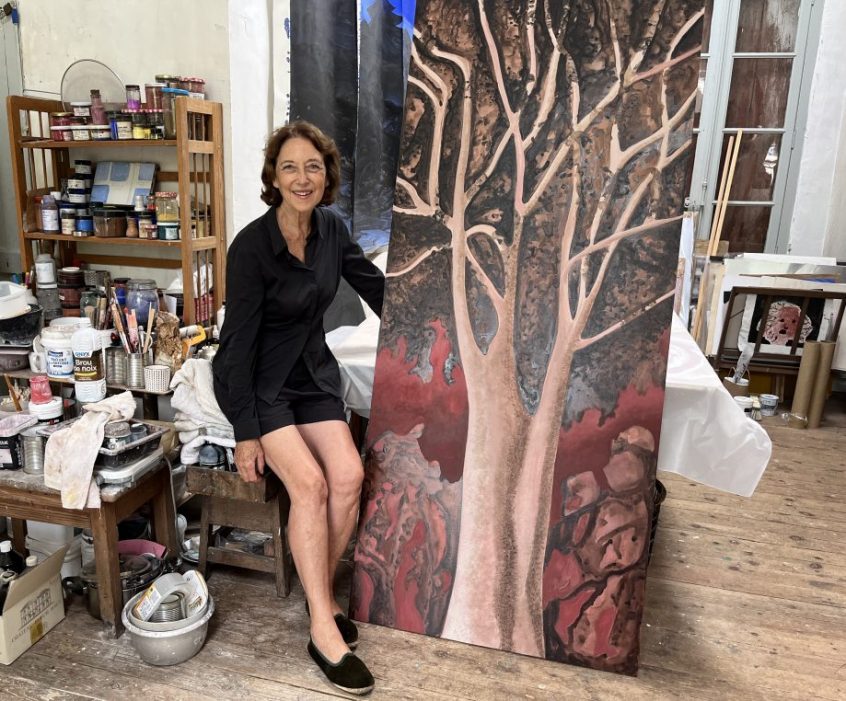 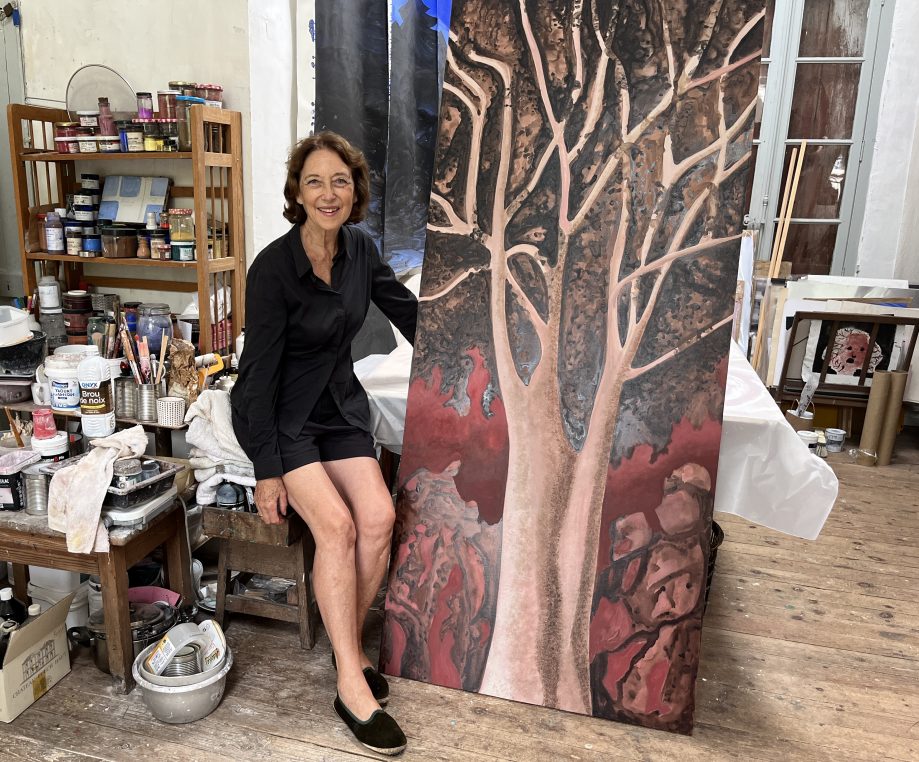 Marie Hugo in her studio with one of her large canvases

Provence has always been a territory for artists and in the summer it is the playing ground of art collectors and museum curators. I was drawn to the South by the wonderful Louis Gauffier exhibition which was closing in Montpellier at Musée Fabre and is opening on October 14 at Musée Sainte Croix in Poitiers where the  artist was born in 1762.  And then my friend Laurence Dumaine-Calle, the most plugged in art lover, took me around to discover new artists. Marie Hugo who is showing her trees at Galerie Vero Dodat next September 22, Lee Ufan whose works are exhibited in the magical City of the Dead, Les Alyscamps in Arles until the end of September. And Jules, the youngest prodigy of Camargue, who showed sixty large canvases at Palais de l’Archevêché in Arles last Spring. 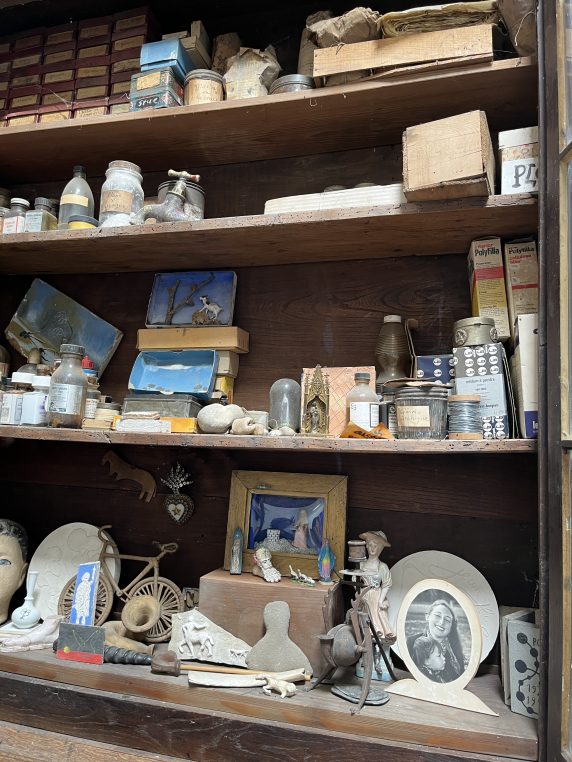 Marie Hugo grew up in Camargue on the farm and vineyard of Muscat which her British mother ran while her father Jean Hugo painted in his studio. And this is where she paints herself, in the midst of her father’s little boxes and large canvases. And  surrounded by the rare trees which protect the house in her magical garden. She is in the process of sending all her works to Galerie du Passage where her exhibition starts very soon. It is a challenge for her to transport her world of Camargue to the heart of Parisian life and her naturally reclusive nature will suddenly have to become, for a month, Victor Hugo’s great grand daughter’s. 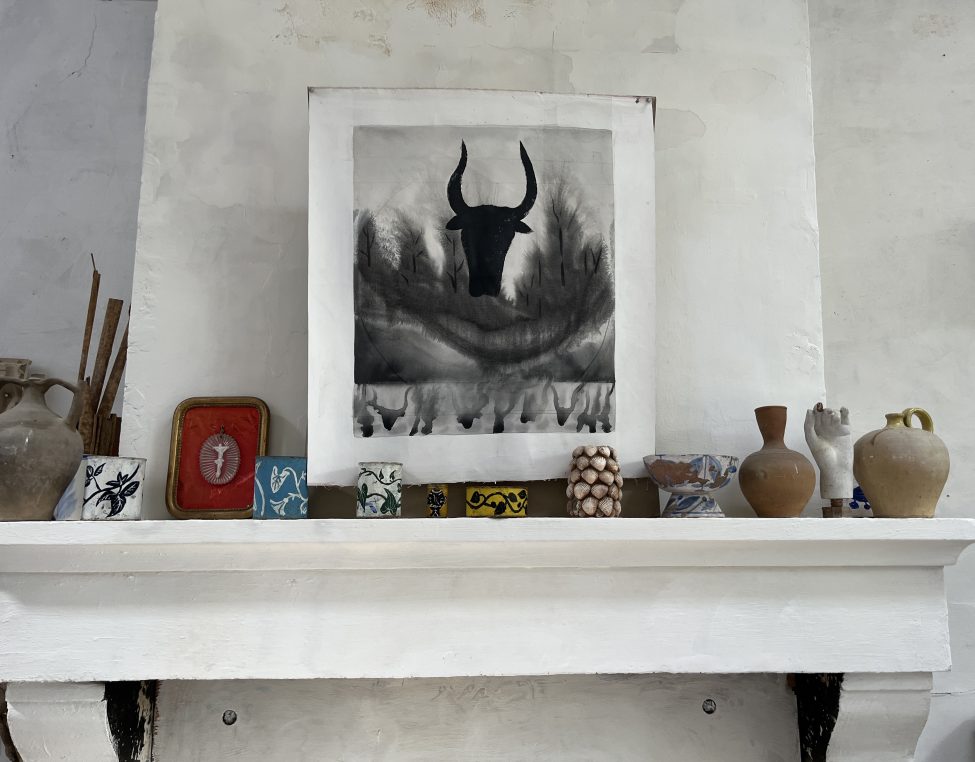 When she was little, she used to walk silently into her father’s atelier and leave a flower or a little key. Later in the day Jean Hugo would return with a box made with the item she had left him. A romantic relationship between a country girl and a charming artist. Nature has invaded her garden around a pond of lotus flowers and lovely Japanese Mulberry which provide a welcome shade in the heat. Her exhibition of over thirty paintings of trees will last for a month at Galerie du Passage. 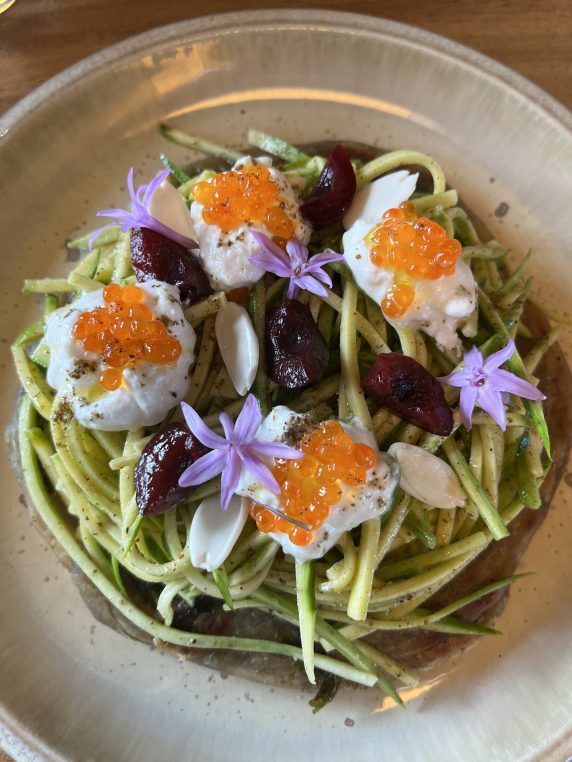 Kachapuri with courgettes, ricotta and poutargue at Drum café in Luma in Arles

The nicest moment in Luma, the art foundation in Arles created by Maja Hoffmann, was our lunch at the Drum café designed by Thai artist Rirkrit Tiravanija.  The strange menu made of delicious “corn ribs”, “Shakshuka” and “Kachapuri”, and served on a sinuous wooden table, was very soothing and relaxed in the Frank Gehry building which is too mineral and cold to my taste. Later, walking along the necropolis of the Alyscamps where Alfred Pacquement placed some sculptures and installations by Korean artist Lee Ufan, was a calm visual experience which I enjoyed tremendously. 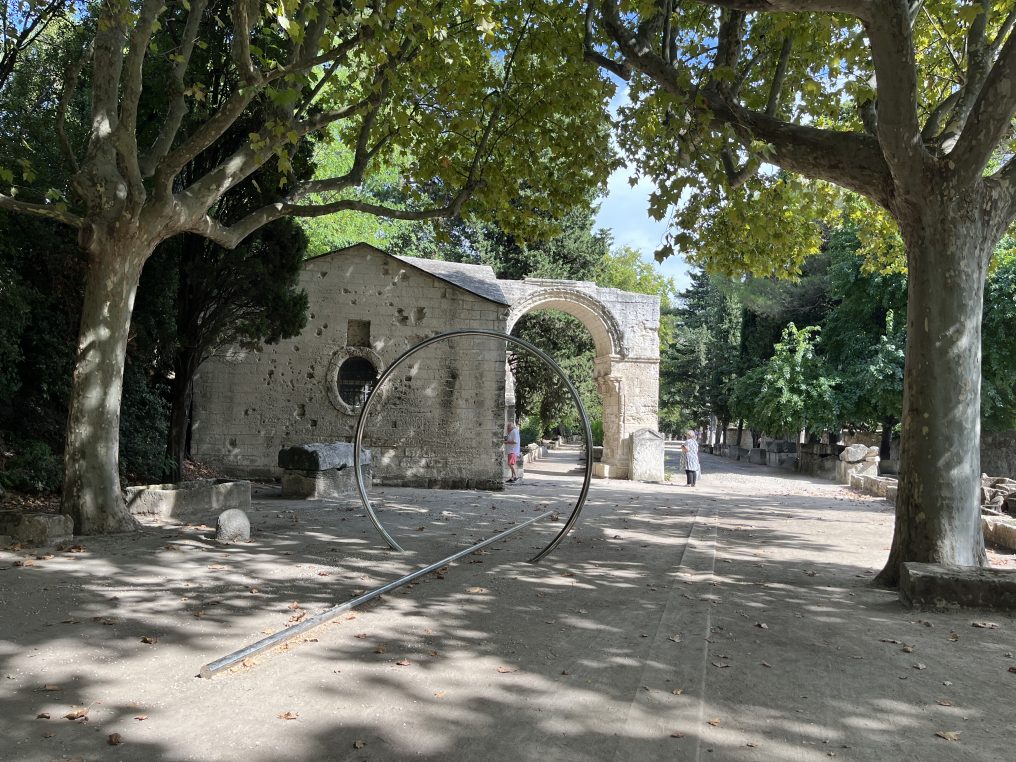 The cherry on the cake of my stay in Camargue was really meeting the 22 year old Jules Milhau, who paints with strength and maturity and has overwhelmed the city of Arles this spring with his exhibition in the Palais de l’Archevêché. The themes are mostly of toreadors and Arlésiennes (like the famous Carmen) painted in an almost  abstract way and his latest painting is of sunflowers. This very literate young man lives outside of Nîmes, on a large farm, where nature takes over. He travelled this summer to Southern Spain to see a specific corrida, meet musicians (he loves flamenco) and discovered Sevilla and the Prado. Raised between Camargue and Corsica, where his great grandparents settled in 1962 after leaving Algeria, he is very influenced by the Mediterranean and comes to Paris once a month to follow the exhibitions. 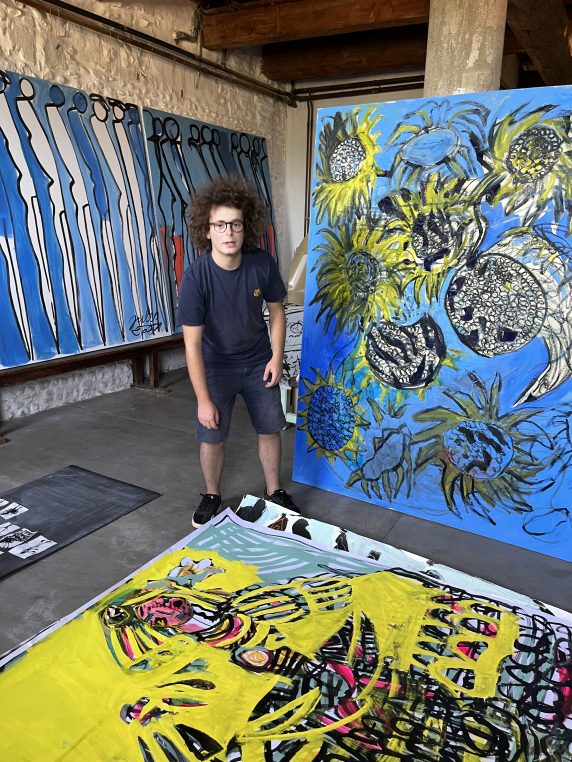 Sunflowers, abstract toreros in the back and a Yellow Menine on paper

One Comment on “Marie Hugo in Lunel, Lee Ufan in Arles and Jules Milhau in Nîmes”