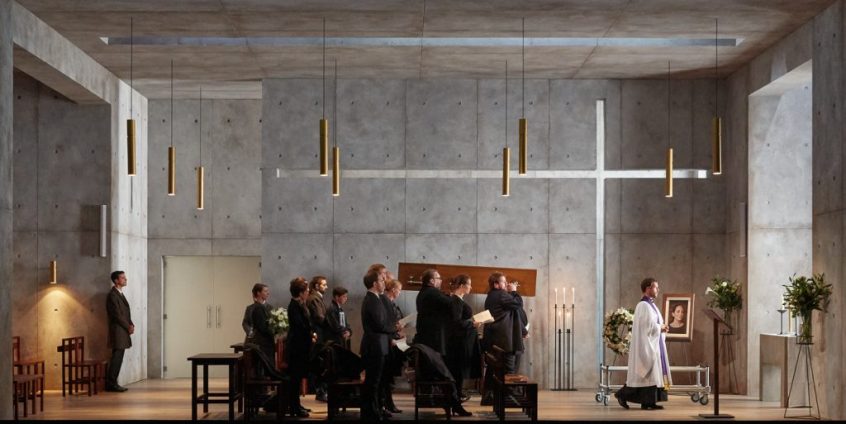 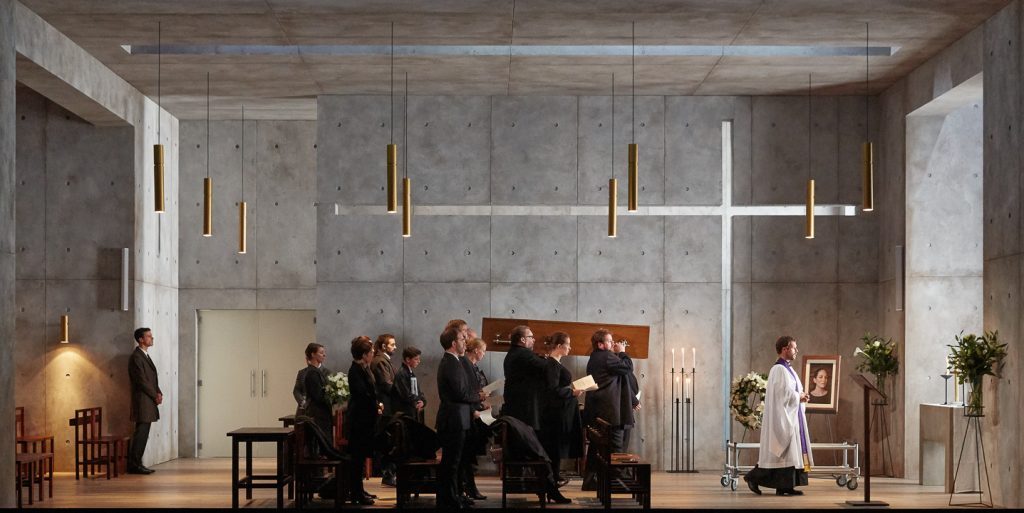 I had sadly been to three funerals last week so I did not feel like sitting at yet another one at Opéra Comique, at the première of “Miranda”. The decor was fabulous and the voices singing Purcell could not have been more delightful, but facing a coffin and masked singers holding a gun for one hour and a half was beyond my patience. 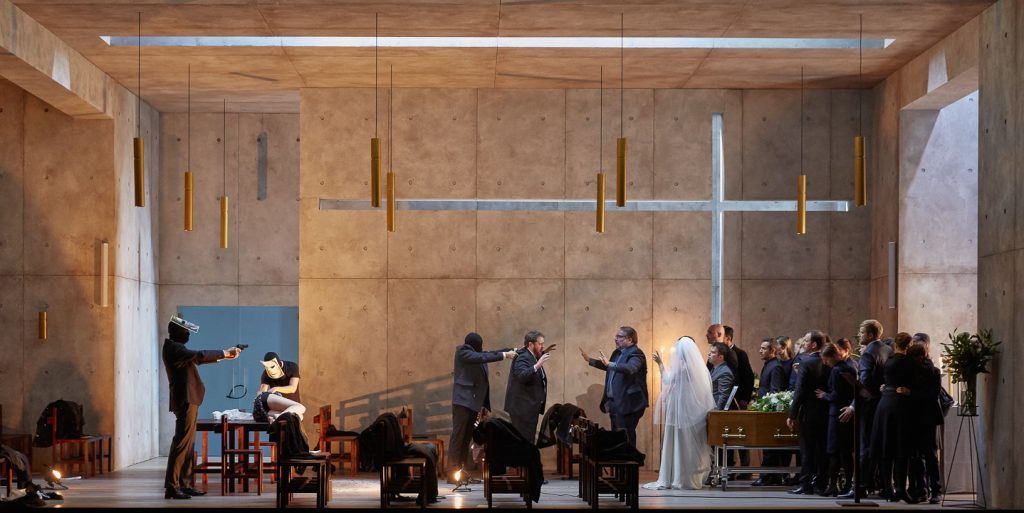 Yet I have to admit that the morning after, I keep good memories of this patchwork of Purcell songs put together by Raphaël Pichon, the conductor, Katie Mitchell, the director and Cordelia Lynn, the librettist. What was wonderful in the performance was the youth of all singers including the very pretty 14 year old boy soprano Aksel Rykkvin singing Miranda’s son and Marc Mauillon, the vicar a baryton with a very special voice. 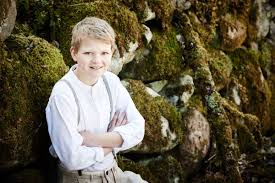 The story of Miranda’s suicide, of her father Prospero, his very young pregnant wife Anna sung by British soprano Katherine Watson and the conciliating vicar (Marc Mauillon) is complicated and dramatic. Every lady seems to have been raped at some point in the story, all men feel guilty and unhappy. The omnipresence of the coffin is unbearable and the guns on stage are just horrifying at a time of strong terrorism threat everywhere. 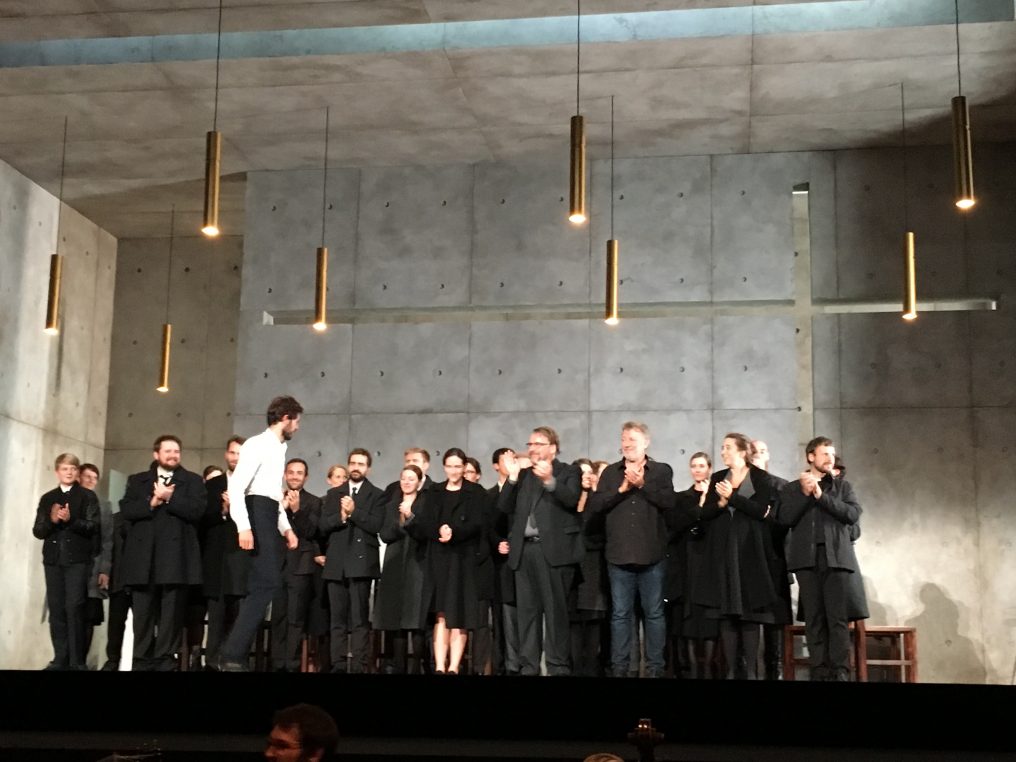 The conductor Raphaël Pichon was applauded by the cast

So did I enjoy the performance? not really but there were moments of grace like the duet between young Anthony and Anna, young Miranda sung by Margot Deshayes, the choirs and the Pygmalion ensemble which was wonderful. 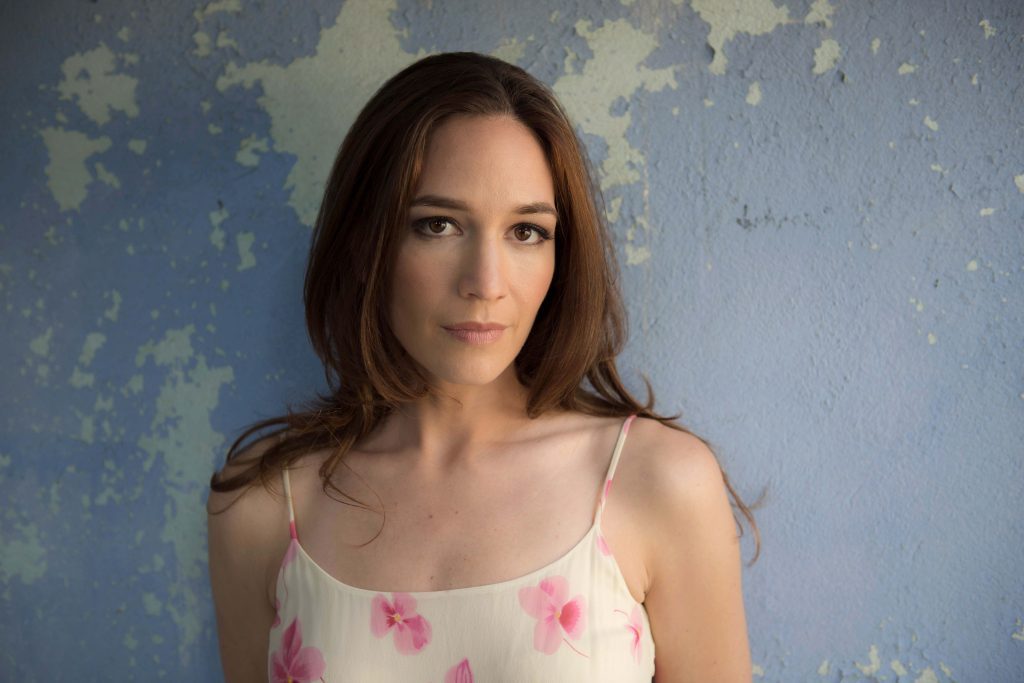 The théâtre of Opéra Comique reopened last May after many years and it is in full beauty. It will feature many contemporary operas next year, as well as unknown pieces like “Le Domino Noir” by Auber, “Mârouf” by Henri Rabaud, “La Nonne sanglante” by Charles Gounod, Gluck’s “Orphée and Eurydice”, Stockhausen’s “Donnerstag aus Licht” and “Hamlet” by Ambroise Thomas. 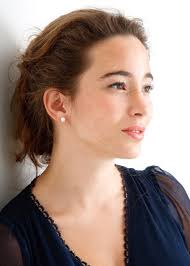 The programmation, very focused on French opera, is original and creative. It has not been perfect every time yet, but at least we discover new works which were covered in dust in an attic and are being pampered for us. And that’s precious in itself… Miranda runs until October 5 th.

One Comment on ““Miranda” by Purcell at Opéra Comique”