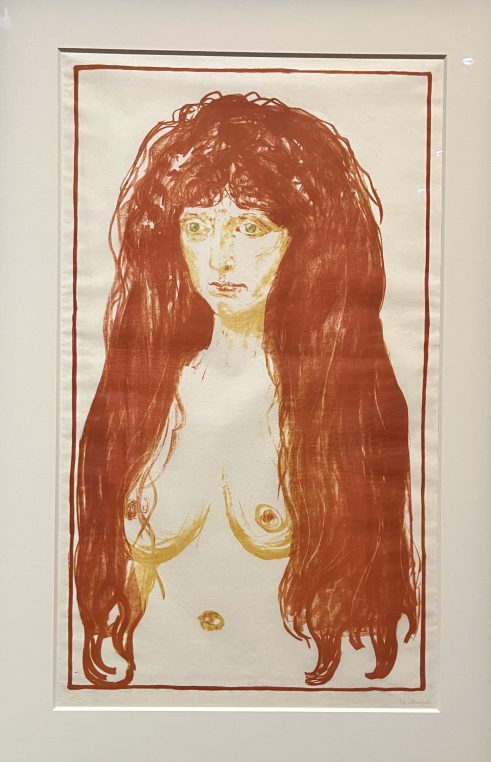 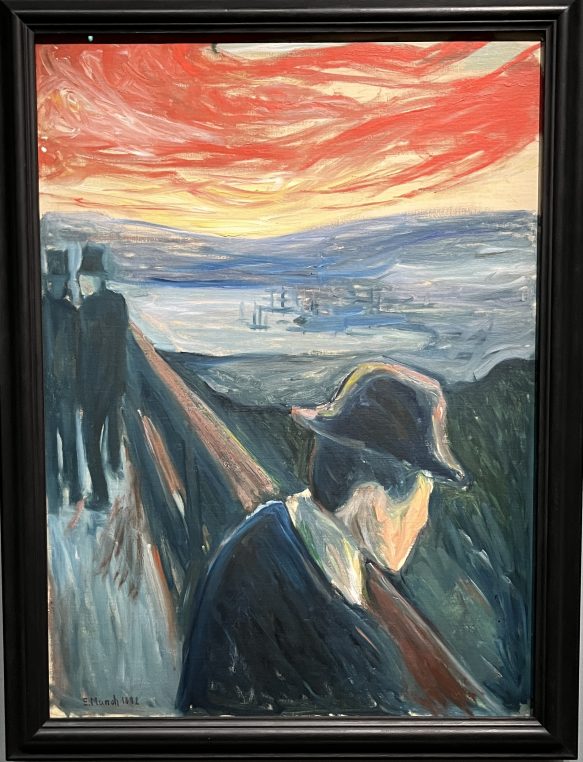 What we always remember about Edvard Munch‘s work is “The Scream“, his most famous painting which represents anguish. But the show at Musée d’Orsay is an exploration of the painter’s (1863-1944) 60 year long itinerary, with the connections and repeats of this iconic painting. It is both exhilarating with bright colors and very depressing at times. Munch’s anticipation of modern art, his symbolist dimension, his exploration of death and rebirth, his obsession with jealousy and red headed women with long hair, make the show fascinating. Yet his dramatic self portraits bring us back to a dark reality. What really matters is the extreme quality of the work and the impeccable staging. 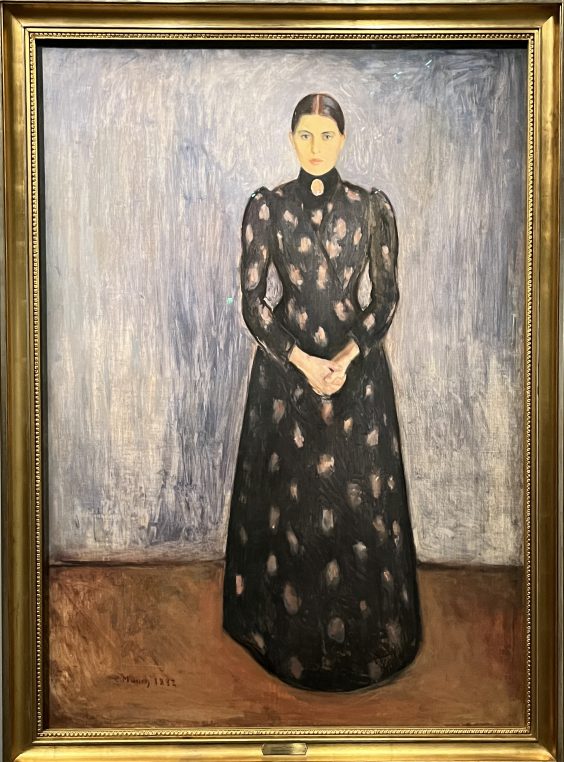 The Norwegian painter comes to Paris at 22 and borrows the freedom and colors from the Impressionists who seem scandalous at the time. He paints his sisters and the writer Hans Jaeger, the three beautiful portraits we see in the first room. “A summer night, Inger on the beach” is one of the most beautiful pieces with the very bright evening light of the north. The very moving “The sick Child” painting results from Munch visiting patients with his father, a doctor. His sister Sophie died when he was only 13 and he paints this little girl again and again. The them will shock audiences when the work is shown in 1886. 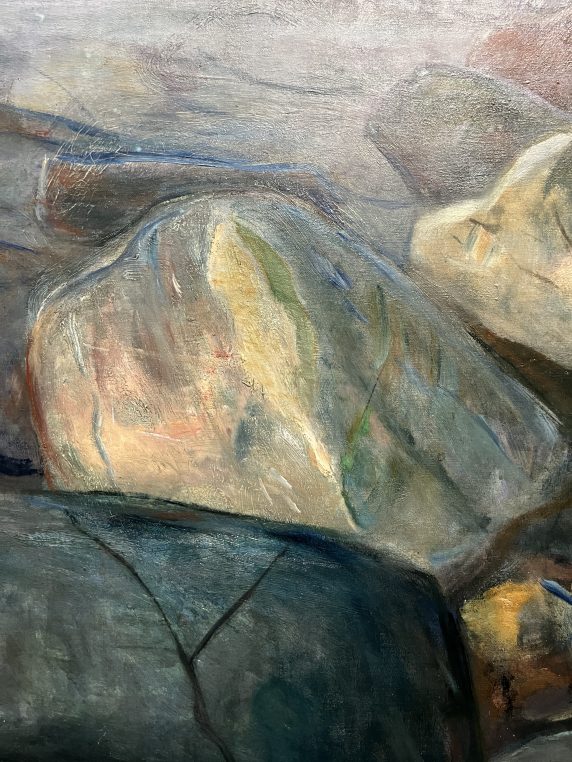 “Puberty” a young naked woman, love, kisses, follow in 1897 while melancholy still persists in a beautiful portrait of his friend the writer Jappe Nilssen. This is when (1895-1896) the Scream is developed through etchings and a painting. “Vampire”, which used to be called “Love and suffering” is the portrait of a beautiful red headed woman who embraces her lover with her long hair.  A “Madone” is declined in numerous lithographs and drawings, as the “Young women on a bridge” of 1918 and 1927 which are the happiest works of the show as far as I am concerned. The reds, oranges, bright greens give an idea of teh very particular summer light. Yet this mix of eroticism and romantic scenes hides many dark jealous moods. 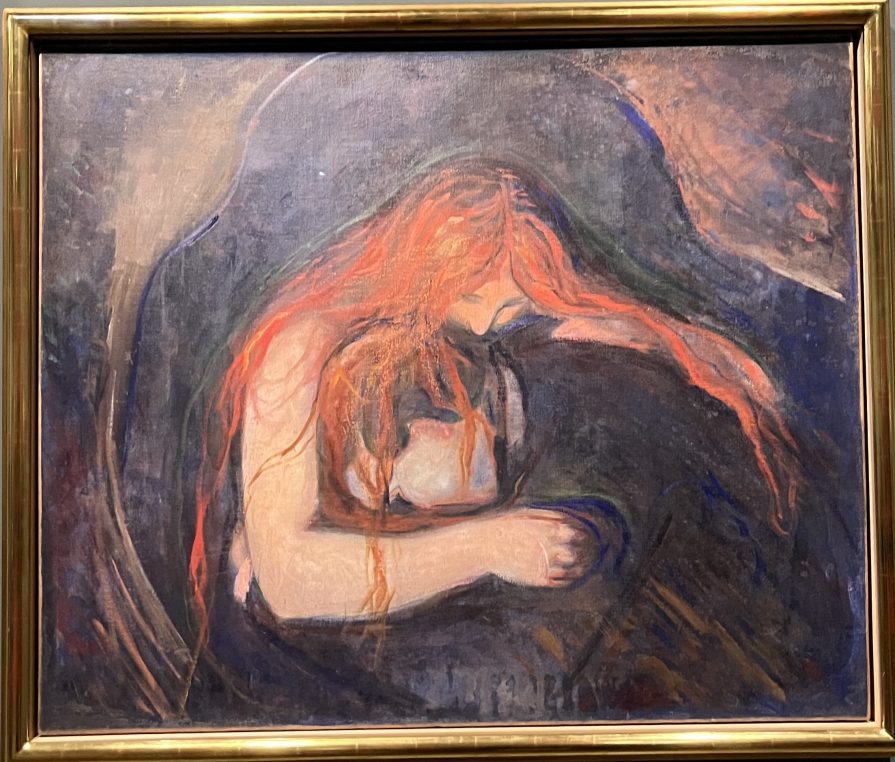 “Fresh snow on the avenue” is a beautiful colorful painting of 1906, “Couples kissing in the park” mixes pink and green in a happy vision.  They precede the darker self portraits of sleepless nights in 1920 and 1923. In the last rooms, large decors created for the Freia chocolate factory are shown in a 2 mn 30 film, produced by Cinétévé with Musée d’Orsay. The cartels are very developed thus teaching us many details of how and when the paintings were done. This show is the major exhibition of the fall, do not miss it. 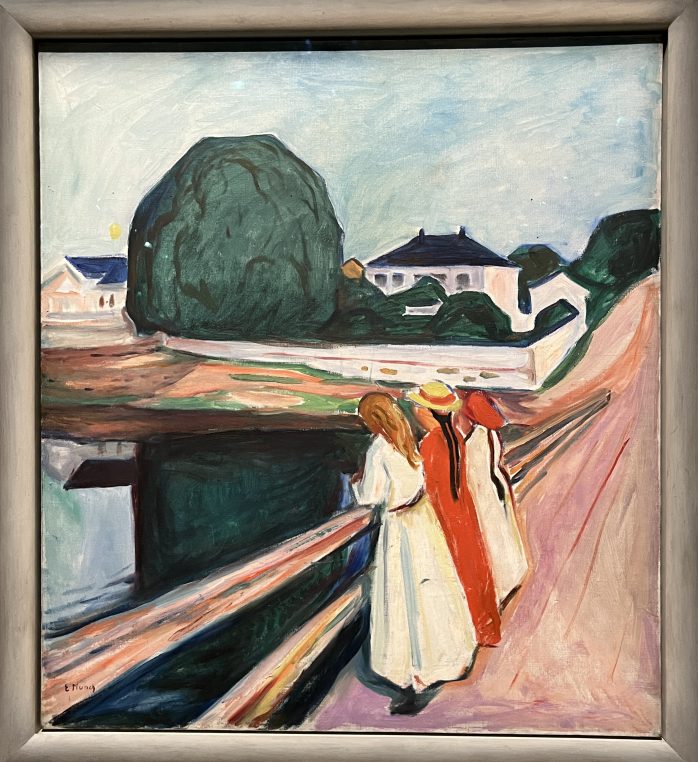 The Girls on the Bridge, 1927, Oslo Munchmuseet

A large program of concerts with Orchestre de Paris is organized in the Grande Nef and recitals at the auditorium with Norwegian cellist and pianist. The National Norwegian ballet will perform on November 22 and 23. There are also lunch time concerts at 12.30 on November 29 and December 13. On October 21, Sandra Paugam’s film on Munch will be aired on France 5 at 10.45 pm.

Musée d’Orsay until January 22, 2023, the exhibition is curated by Claire Bernardi.

2 Comments on “Munch, a poem of life, love and death at Orsay”