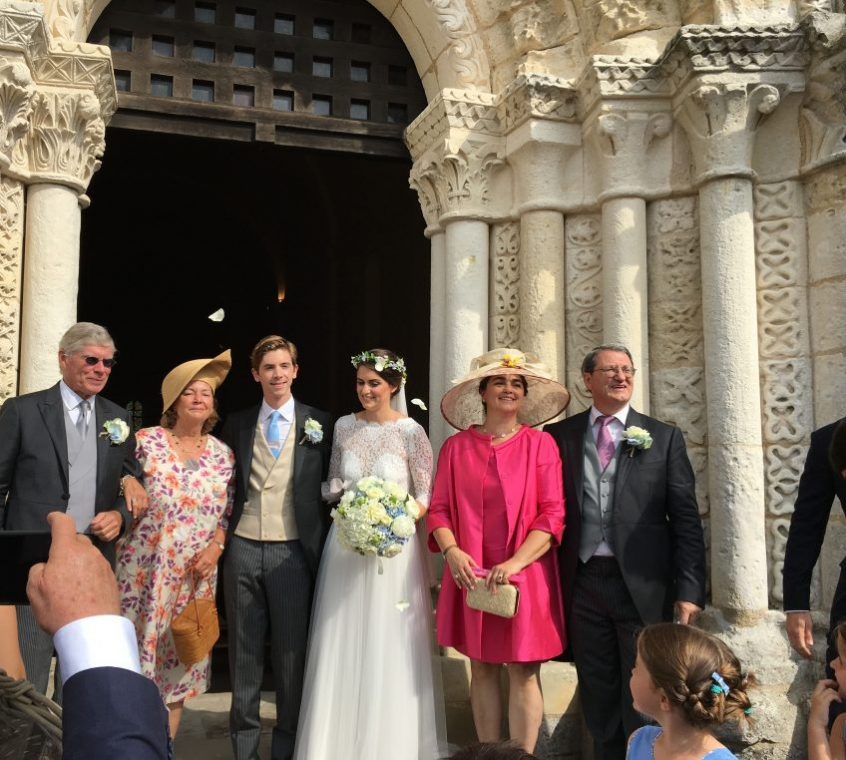 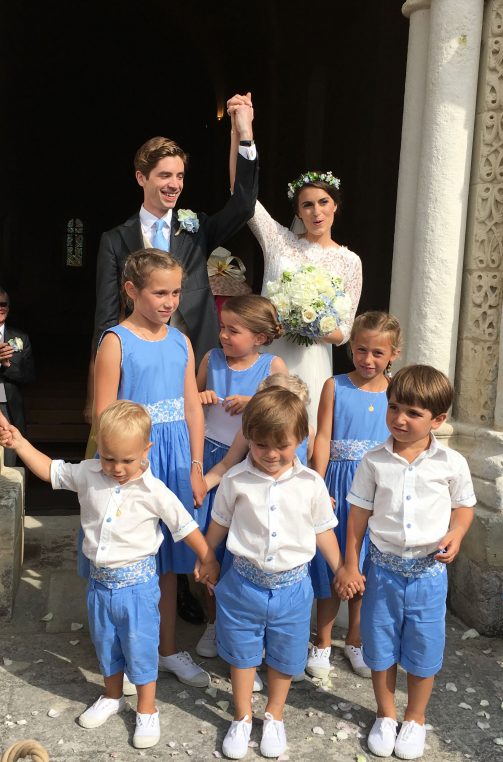 Alexander and Aude with their nephews

It took seven years to prepare and was therefore a perfect wedding in the most  traditional French way with a religious blessing in the medieval church of Echillais, Charente Maritime. Aude Moriani and Alexander Shea were married by Father Gérard Bénéteau, from the Oratorian order, and dinner was served at La Limoise, the family home, often visited by writer Pierre Loti in the 1870’s as he recounts in his early book, “Le Roman d’un enfant”. But mostly, everyone was laughing, enjoying themselves and loving the young couple. It was simple family happiness ! 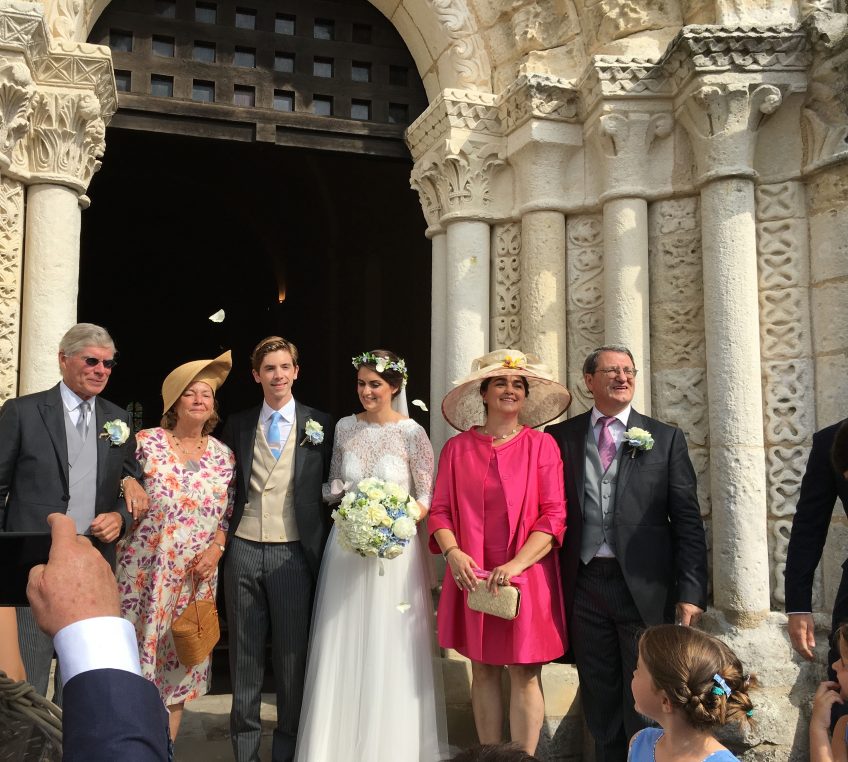 It is rare in a wedding when mothers of the groom and the bride kiss each other at the end of the day ! The picture of Catherine and Claire sums up  the spirit of the three day celebration near Rochefort, the city famous for its ship building and arsenal developed by Colbert in the 18 th century. This is where “L’Hermione “ was built before it led La Fayette to the United States. And all the guests went for a thorough inspection of the ship, which was reproduced identically and sailed back to the U.S. two years ago. They also all spread out on the Saturday market and in the streets of Rocherfort, a beautiful 18 th century shipping center. 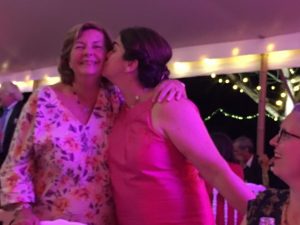 The whole town was celebrating La Fayette that week end, a perfect addition to the rehearsal dinner in the Corderie royale, the famous rope manufacture built in 1666 by Colbert. The building is 374 m long so as to accommodate the making of 195 m long ropes. Some military ships needed 100 kms of ropes ! The presence of naval military is so strong that the city still has a school devoted to gold embroideries for uniforms! So canons were fired all day in honor of the newly weds… 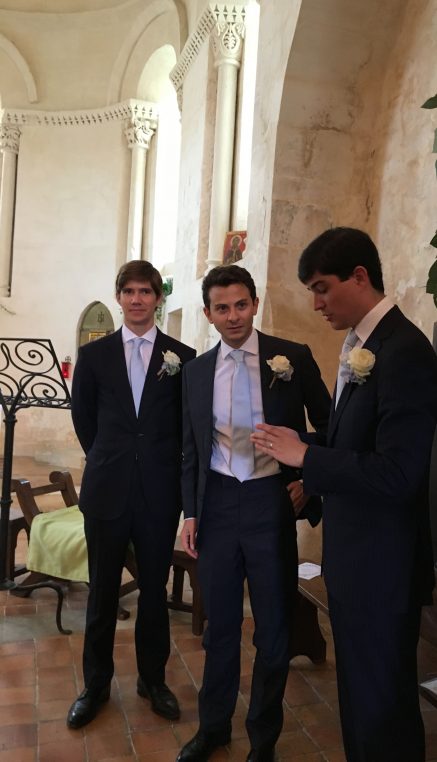 The arsenal or military harbor was built there for security reasons. The river Charente, which flows through Rochefort, ends in the sea fifteen kilometers further but ennemies could not reach the harbor easily… It was fun to watch from our hotel the sailboats going down the river while Ancien Régime armies were marching in their white uniforms on the lawn. Costumed ladies, music, horses were in a way celebrating the wedding too. 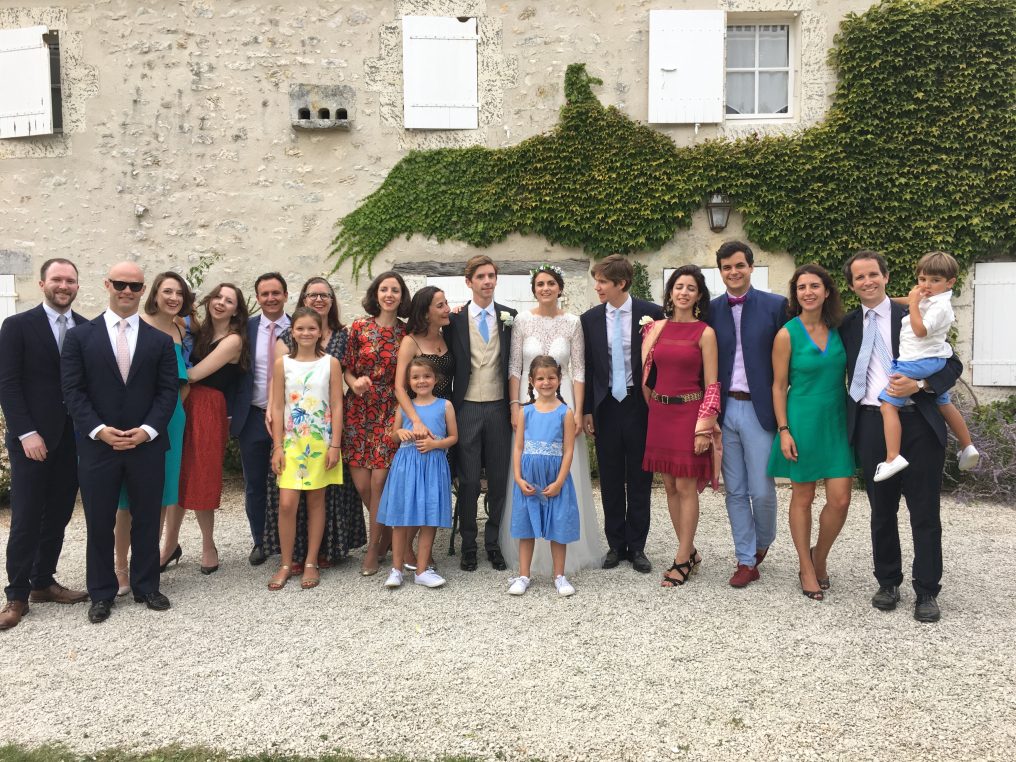 The Gramont, Shea, Lastours cousins with the new generation

The wedding was a very Franco American celebration with the groom’s three uncles, John, George and Patrick Shea having flown over from Boston, his sister Penelope from New York, Sebastian from Abu Dhabi, and many guests having come from Japan, the United States, Denmark, India, Syria and Lebanon, Spain, Switzerland, London, Cuomo, etc… 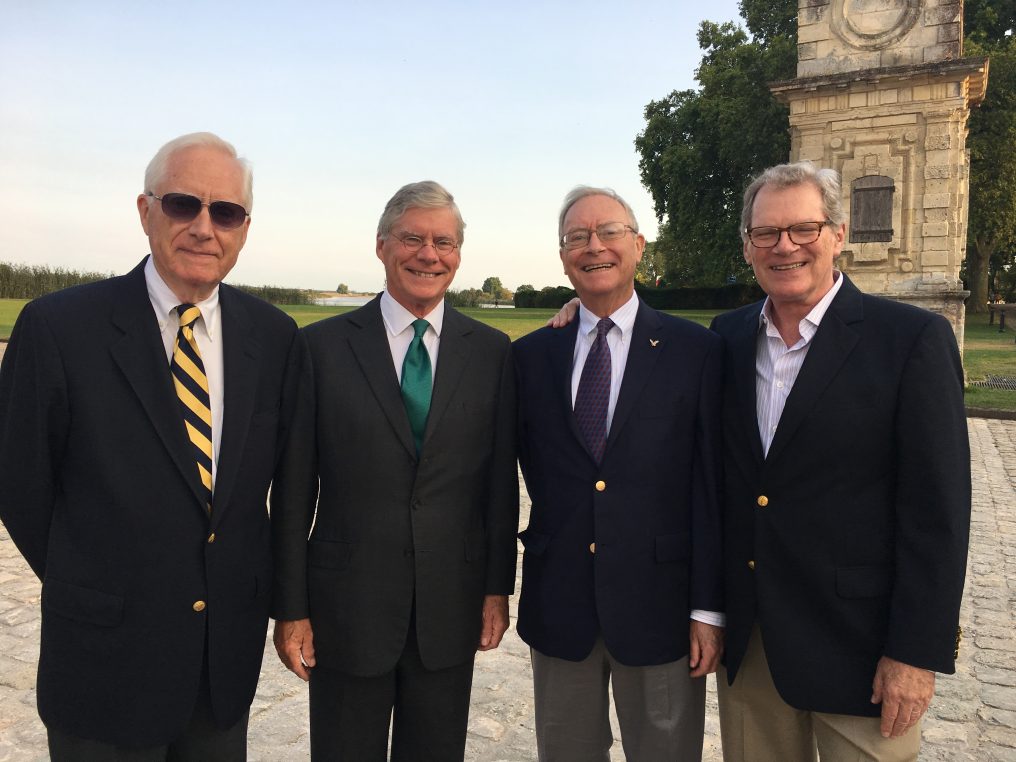 The couple met at HEC, the French business school after studying at Tufts University and Mc Gill and there were many young and handsome girls and boys from all three schools. It was love at first sight as many speeches reminded us and their common sense of humor did the rest. 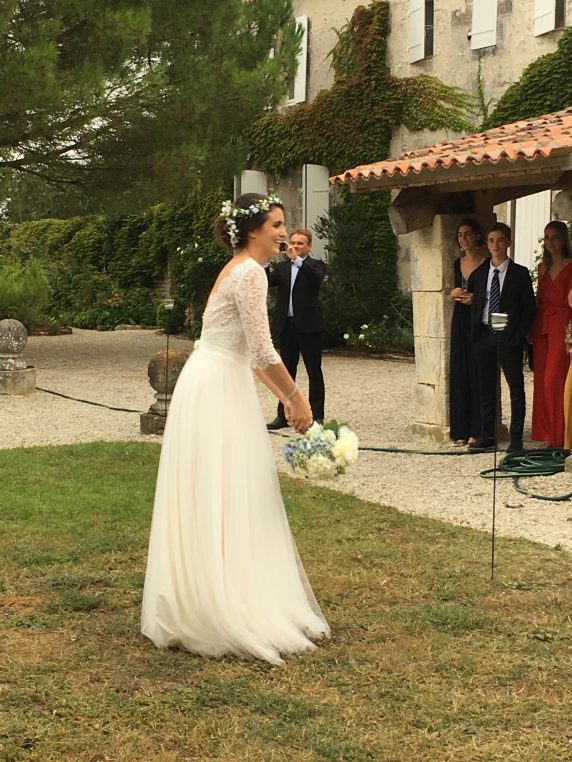 The bride sends her bouquet

The bride wore fabulous shoes by Jimmy Choo and a spectacular dress of lace and tulle with bare back and she never stopped smiling. Guests were overblown by emotion when Alexander Rabin played Bach’s cantata BWV 147, “Jesu, Joy of man’s desiring” and the flower girls sang “Amazing Grace” at church. Beethoven’s violin sonata, “Le Printemps”, and “Love me tender”, completed  the music which was particularly excellent. 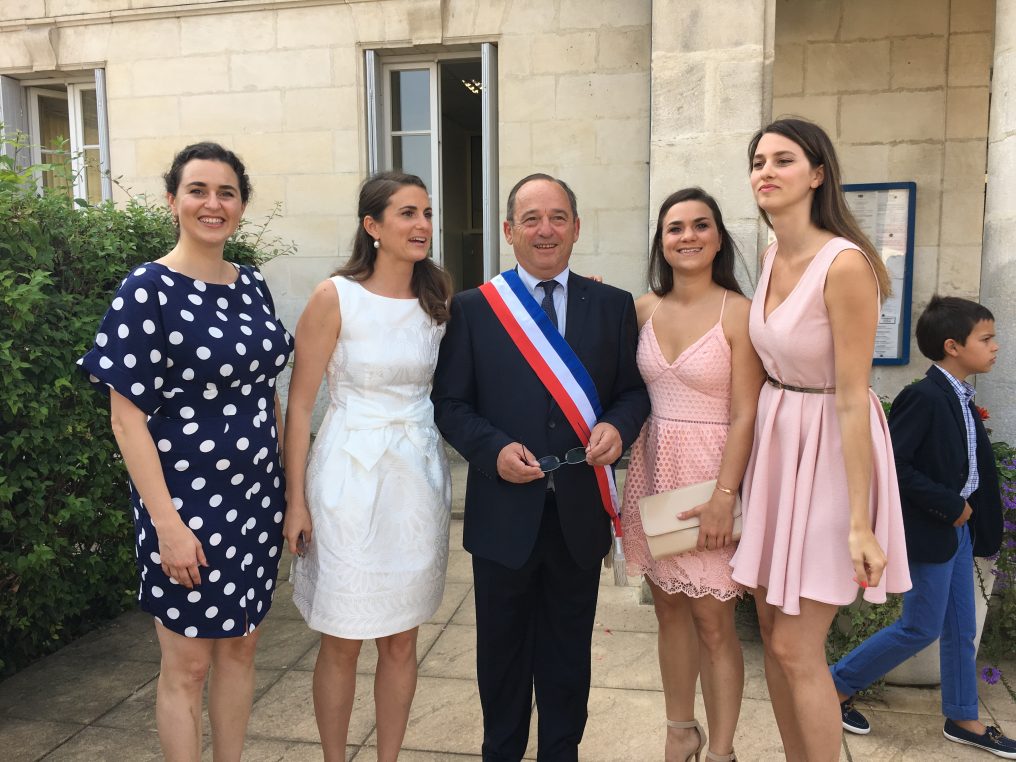 Clémence, Aude, Albane and Marie around the deputy mayor their uncle, Etienne Rousseau

I can go on telling you about the « bonbons de foie gras », an incredible delicacy prepared by Piaud Taillac and the fabulous duck magrets, the tender chèvre du Poitou and the blue lemon wedding cake. Pineau des Charentes was served with champagne and everyone loved the excellent red claret Château Laulan 2010, provided by a friend of the Moriani’s. 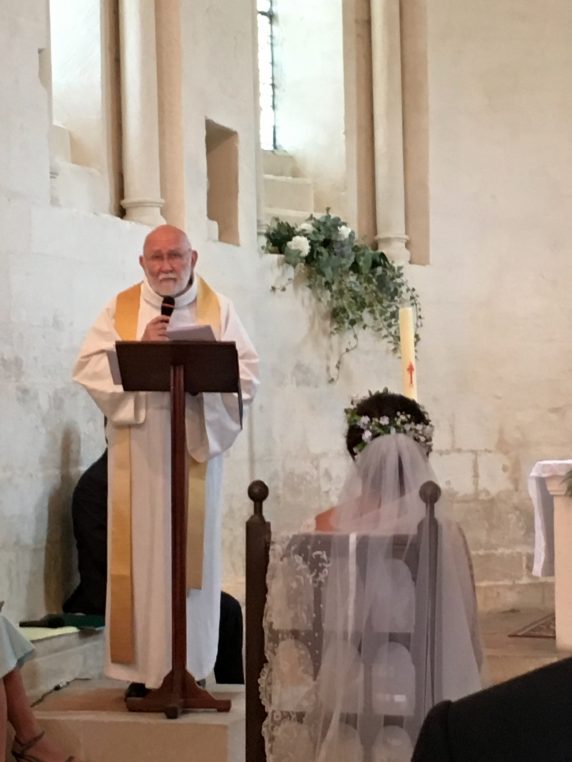 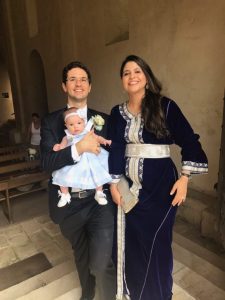 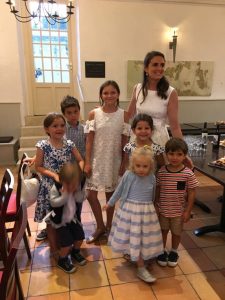 The bride with some of her nephews and nieces

Myriads of children were constantly having fun whether at the pool during Sunday brunch or at the Corderie Royale on Friday night.

Margot and Samuel Plummer had flown in from Shanghai with their Chinese nanny, Beatrix and Gaspard Stewart Stand from Brooklyn, Irène and Louis de Lastours from London, Judith and Joseph L. from Saint Malo… 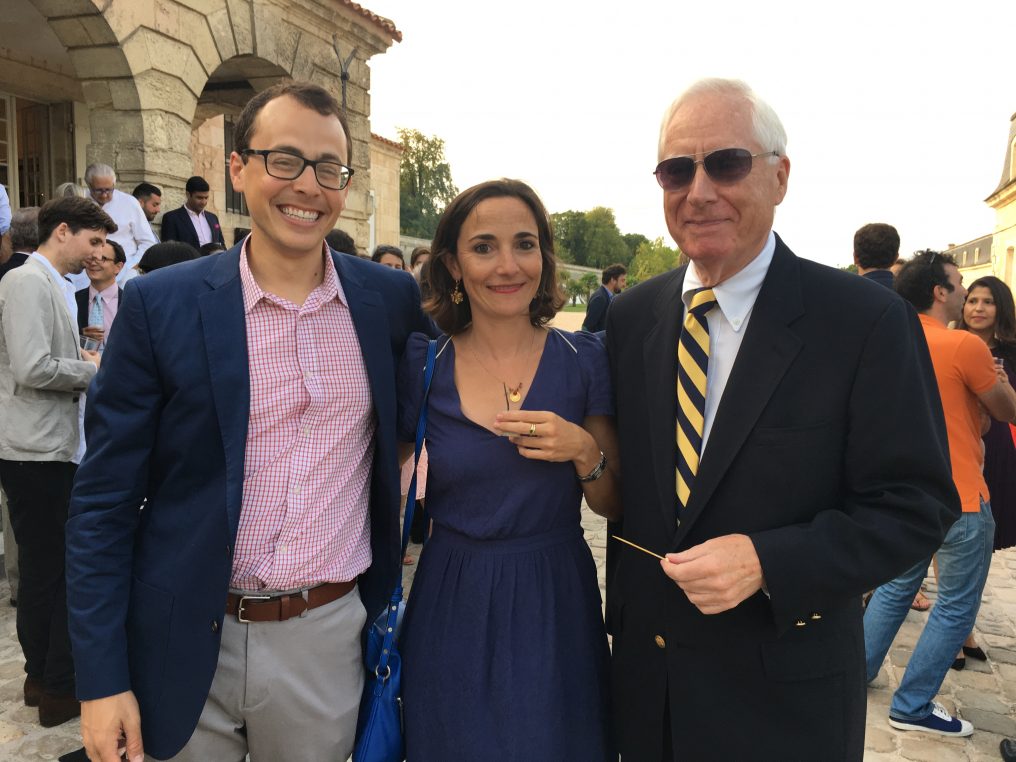 Everyone had driven long distances from their holiday spots and guests were all tanned and beautiful with just one idea in mind, celebrate this seven year romance and have fun! The three doctors on call did not have to exercise their art and everyone drove home safely. 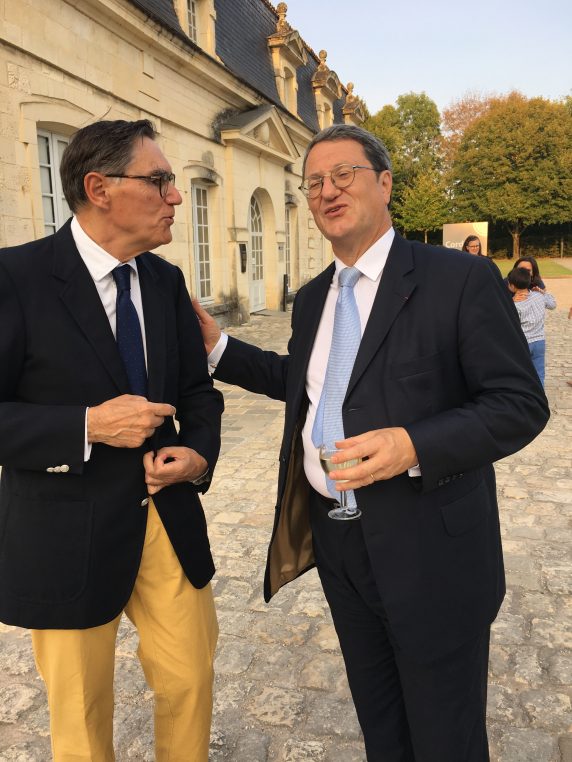 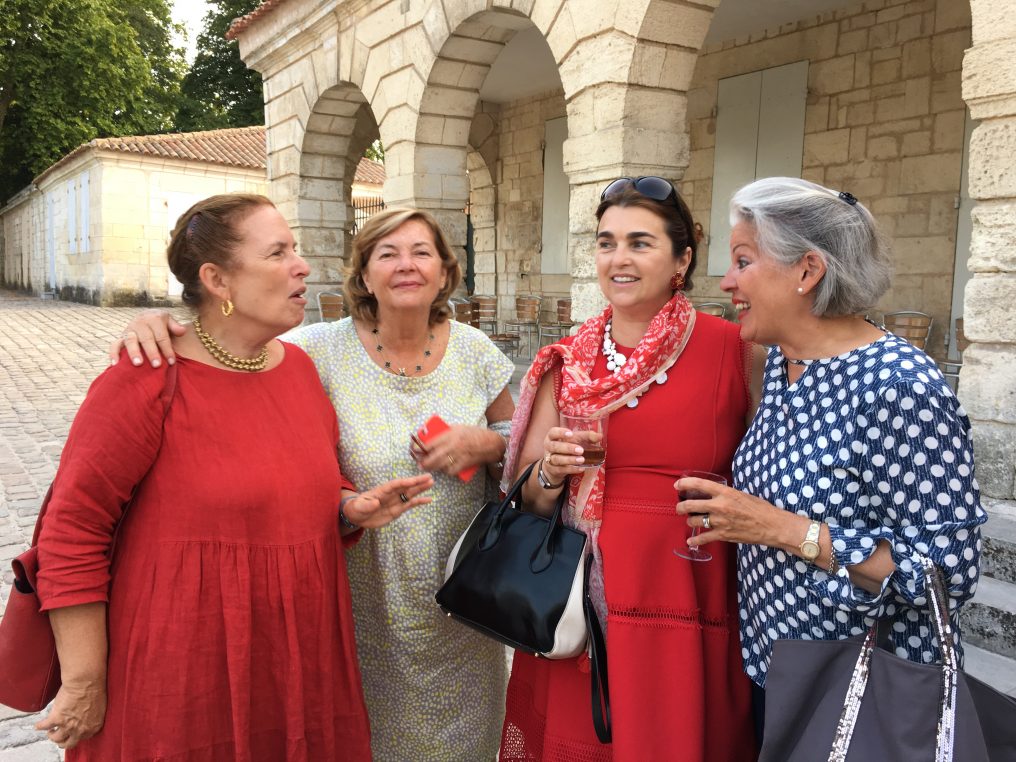 The wedding was an excellent promotion for large families as children behaved wonderfully and had great fun! And the young couple flew off to Majorca…

17 Comments on “A perfect wedding, seven years in the making!”