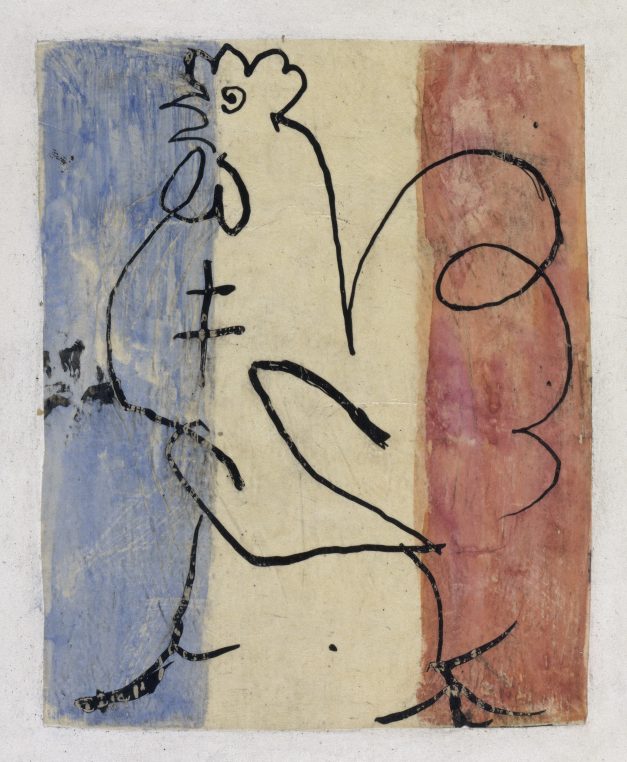 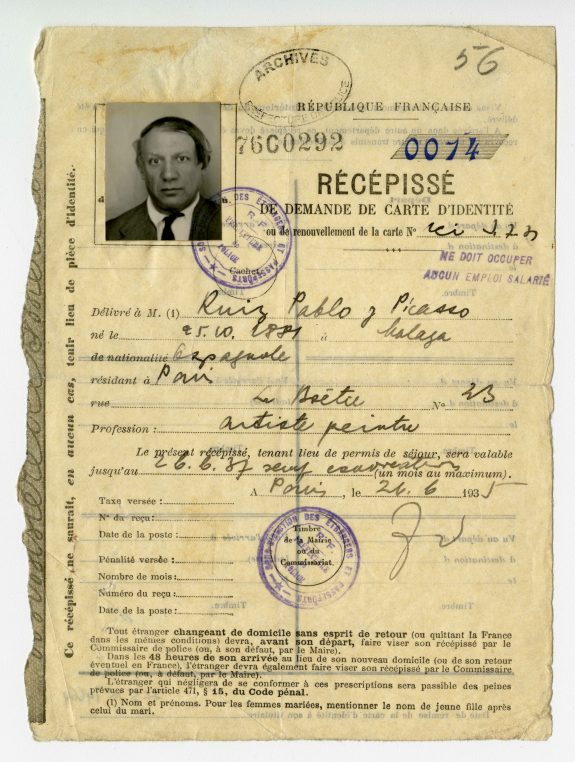 Musée National de l’Histoire de l’Immigration has never found a better role than with this exhibition “Picasso l’Etranger” (Picasso the Foreigner) curated by Annie Cohen Solal, the well known intellectual and excellent biographer of Jean Paul Sartre and Leo Castelli, who has written a very interesting book on Picasso’s immigration dramas in Paris after seven years of research in the police archives. The “greatest” artist of the 20 th century had a miserable time with the French police who listed him as an anarchist in 1901 and persecuted him for a long time. This show highlights the paintings he did while suffering in misery. It puts back a light on how tough artists’s lives can be even when they are acclaimed geniuses. And it points to the fact that Picasso spent his life in France and was never naturalized. 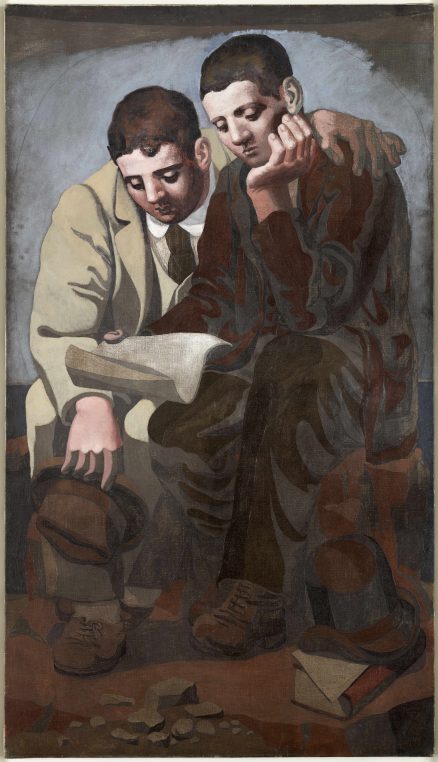 Annie Cohen Solal calls it the “Paradox Picasso”, facing an Icon such as he is, who never became French because his naturalisation quest on April 3, 1940 was refused, and he never asked for it again. Since the Picasso museum was opened in 1985 at the heart of the Marais, the Catalan artist has become one of France’s greatest artists. He was black listed (fiché) by the police in 1901 when he stayed with a friend who was close to the anarchist movements and was suspected of being a leftist and an “avant garde artist”. In 1947, only two of his works had been acquired by French museums  and yet he had decided to settle in our country forever. 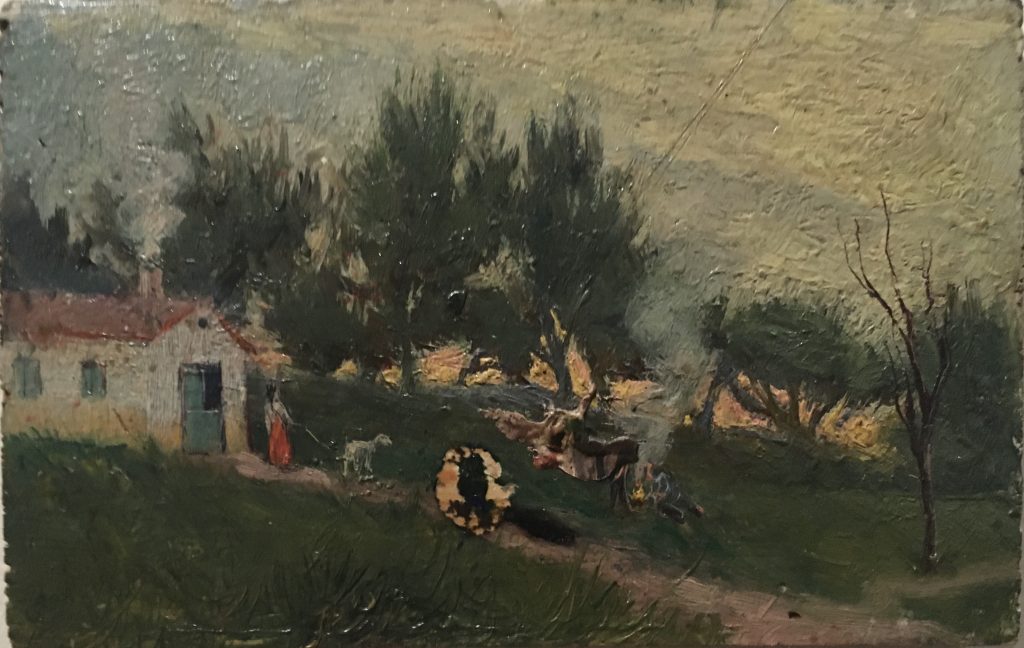 The exhibition starts with very moving paintings from his childhood. “La Corogne, a country house” ca 1892, when he was 11, and “Mountains in Malaga”, June-July 1896,  already show his premature talent. His mother kept all his drawings and paintings as they vacationed in Andalusia. And it describes minutely his various trips to Paris. First for the Universal exhibition of 1900, then in 1901 when Pere Mañach organized an exhibition at Galerie Vollard. He produced 64 works  in record time, including “Femme au bonnet” lent by the Picasso museum in Barcelona which he painted in the Saint Lazare prison-asylum in Paris. This is celebrated by an art critique who announces the painter as a future star. But this is also when the first police reports falsely accuse him of being an anarchist.  In 1902, when he travels with his Catalan friends, he is very tormented and unable to pay his hotel bills and sells paintings describing the Parisian underworld, misery and prostitution. Max Jacob, the poet helps him and teaches him rudiments of French.  A number of police documents are shown with the xenophobic reports and spying notes. 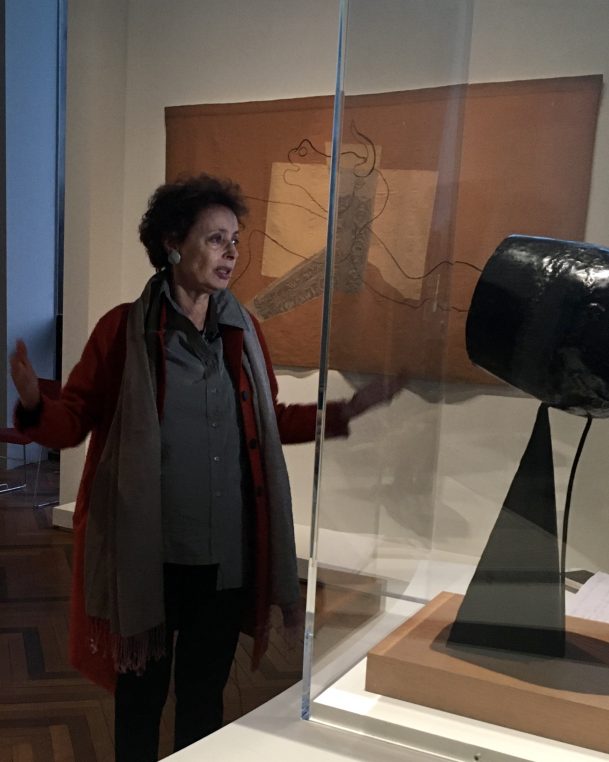 The formidable Annie Cohen Solal, curator of the show

In 1904, he makes his fourth trip and settles in Montmartre at the Bateau Lavoir where he stays until 1909. There he meets Guillaume Apollinaire who encourages him in his talent and helps him to acquire Iberic sculptures, which they later learn had been stolen from the Louvre. He is again suspected by the police for this acquisition. Sadly Apollinaire is wounded in the war in 1916 and dies two years later of the Spanish flu.  He paints “Fillette à la corbeille fleurie” a young  woman who sells flowers in Montmartre, one of the rare paintings in the show to still be in private hands. 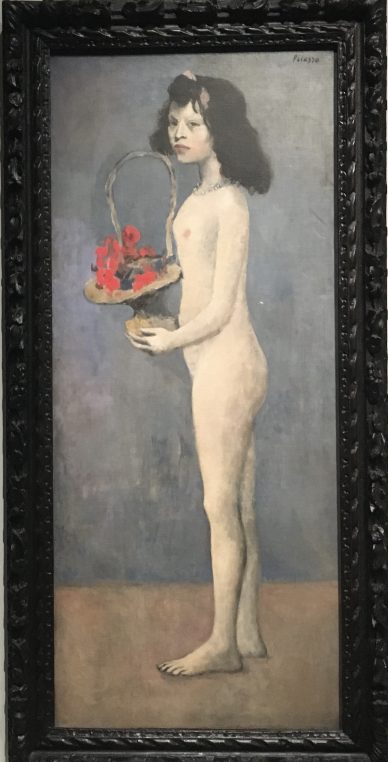 There are quite a few films and interviews of his gallerists and of himself which are extremely moving. Daniel Henry Kahnweiler talks about Picasso and describes his first early visit to his gallery. Then follows WWI when seven hundred of his paintings are seized at Kahnweiler’s, a German citizen, and sequestered for ten years. He resents it as a true “amputation”. Some of his friends were killed in the war, he feels more and more foreign and turns to new aristocratic social circles, creates decors for the Ballets Russes where he meets Cocteau, Satie and Stravinsky, and gets involved with the MoMA in New York with Alfred H. Barr at its helm. His art is profuse and goes into various directions. 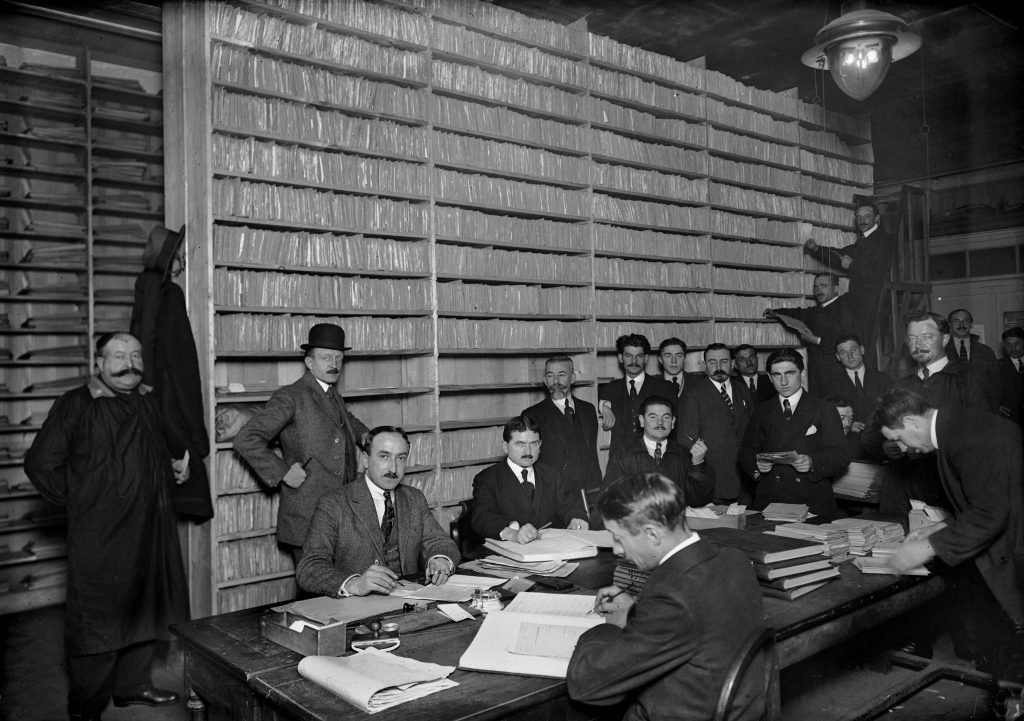 In 1936, he joins the Spanish Republicans who make him Honorary director of the Prado museum. This is when he paints in 35 days, “Guernica” after forty four Nazi bombers with thirteen aircrafts of the Italian legion annihilate the Basque village of Guernika. This large work will become the banner of resistance to all fascisms. He then paints “Crying woman”, the face of torn out Spain, the last hope of European democrats in times of fascism. 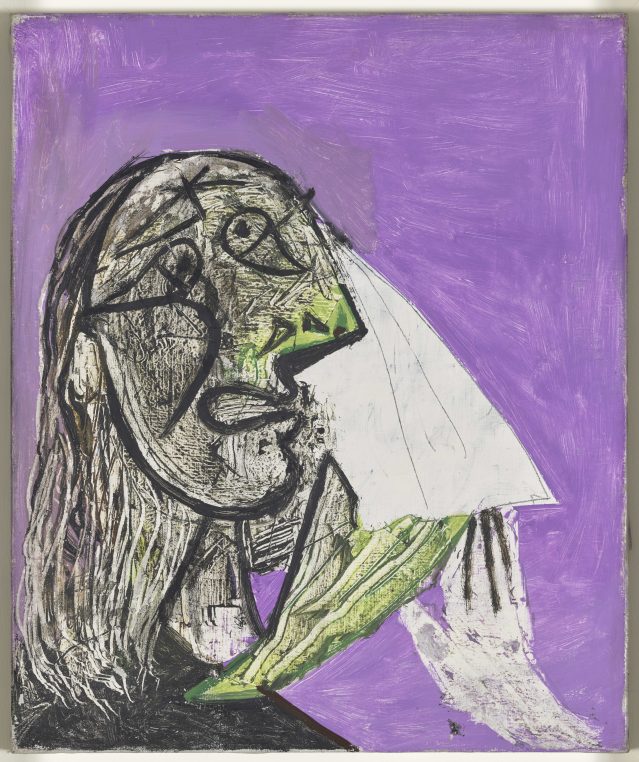 Again during WWII, the police goes after him and he is closely watched like all foreigners. The fame of Guernica has become a serious threat for him in Vichy France and this is when on April 3, 1940 he applies for French citizenship which will not be granted due tot the first 1901 note which said: “This foreigner has no right to obtain naturalization”. More frustration ensues for the artist who will nevertheless remain in the country until his death. 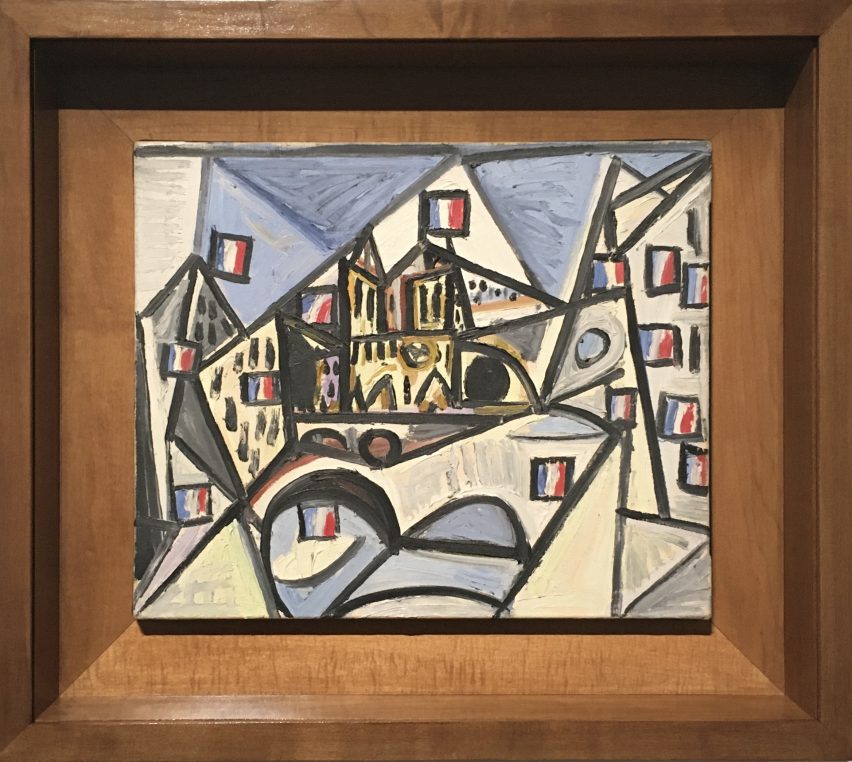 After the war, the artist gives ten paintings to French museums and gets a status of Privileged resident from the Prefect of Paris. One after the other, museums start celebrating him all over France. In 1954, he moves to the Riviera where he dies.

The triple stigmata of being a foreigner, a leftist and an avant-garde artist will not have killed the most prolific artist of he XX th century.  This exhibition is very surprising and for someone as widely shown as Picasso it is a true challenge. And it makes us think about the importance of allowing immigration in our countries. 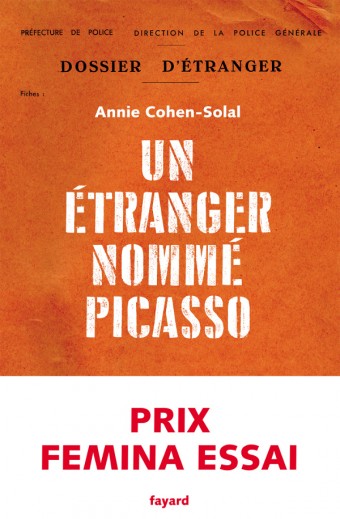 Until February 13, Musée National de l’histoire de l’Immigration. And the fascinating enquiry Un Etranger nommé Picasso by Annie Cohen Solal, published by Fayard, which was awarded the Femina Non Fiction Prize. There is also a catalog of the exhibition.

2 Comments on “Picasso, the Foreigner, by Annie Cohen Solal”