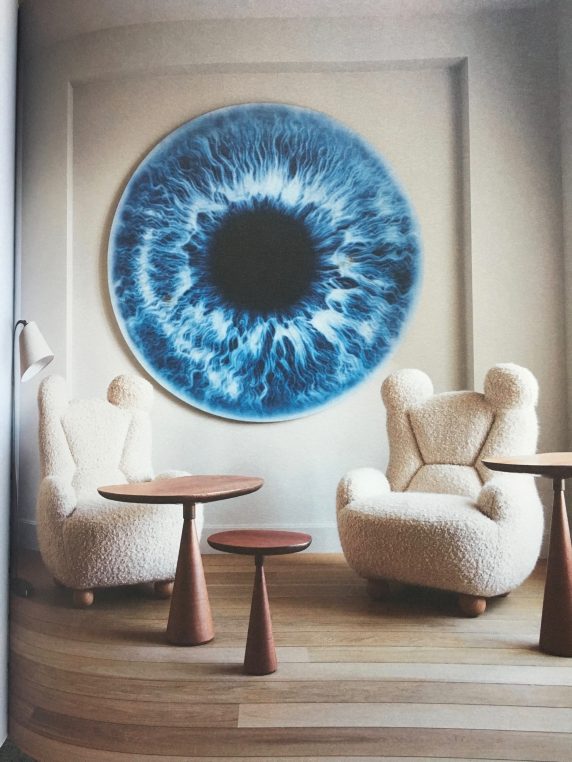 Two armchairs Papa Ours Py, Oops collection, lamp by Paavo Tynell ca 1940 and painting “We shall share our chemistry with the Stars” by Marc Quinn on Central Park West

It was the first book signing of the Rentrée and at Galignani’s, Danielle Cillien-Sabatier, the grande Prêtresse of the bilingual bookstore, was in full steam. Interior architect, designer and art collector Pierre Yovanovitch was chatting to all his friends while dedicating a superb 365 page album of his work, published by Rizzoli in English and in French. Everyone was glamorous, tanned and relaxed by their vacations in Greece or in Provence. What a relief to be back in Paris, to its intense social life and celebrations of artistic friendships! 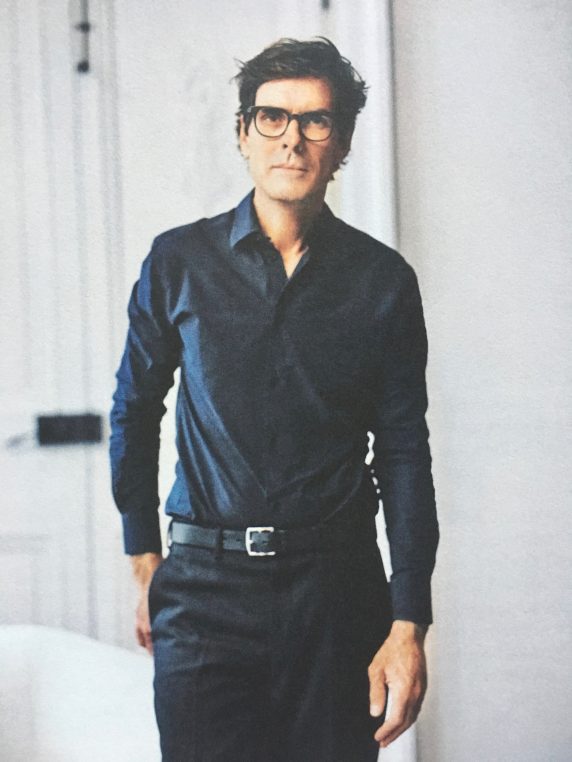 At 54, Pierre Yovanovitch runs his company on rue Beauregard in Paris and on Madison Avenue

Olivier Gabet, director of MAD, wrote a fun text addressed to Mademoiselle Oops, the name of the new line of furniture designed by Yovanovitch, where he mentions Fabrègues, his large house in Provence, featured at the beginning of the book. The gardens designed by Louis Benech (who else?) are manicured and both men were attending the cocktail party where, Kristin Scott Thomas arrived discreetly around 8.30 pm. Natasha Fraser Cavassoni, who always signs her books at Galignagni’s, was there talking about a new Chaumet book of diadems. 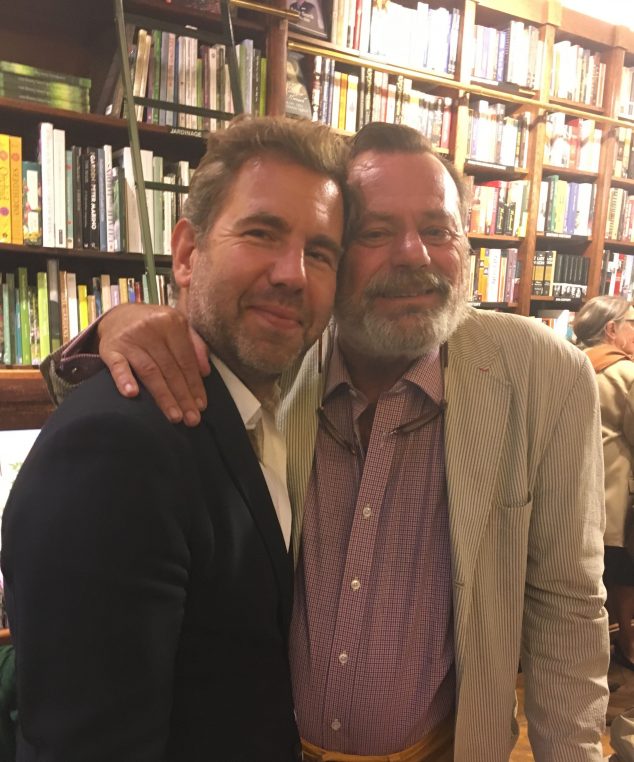 William Middleton, author of the excellent biography of John and Dominique de Menil, “Double Vision”, who now lives in Paris and is writing a biography of Karl Lagerfeld (who used to shop every day at Galignani’s). Charles Sébline ,who designs beautiful simple shirts, was as charming as ever.

Designers Bruno Frisoni and Hervé van der Straeten were also in town as Anne de Villepoix the galerist, who is always on the move. Jean Gabriel Mitterrand, looking as young as ever, was on his way to seeing “Tosca en plein air” at the Invalides. 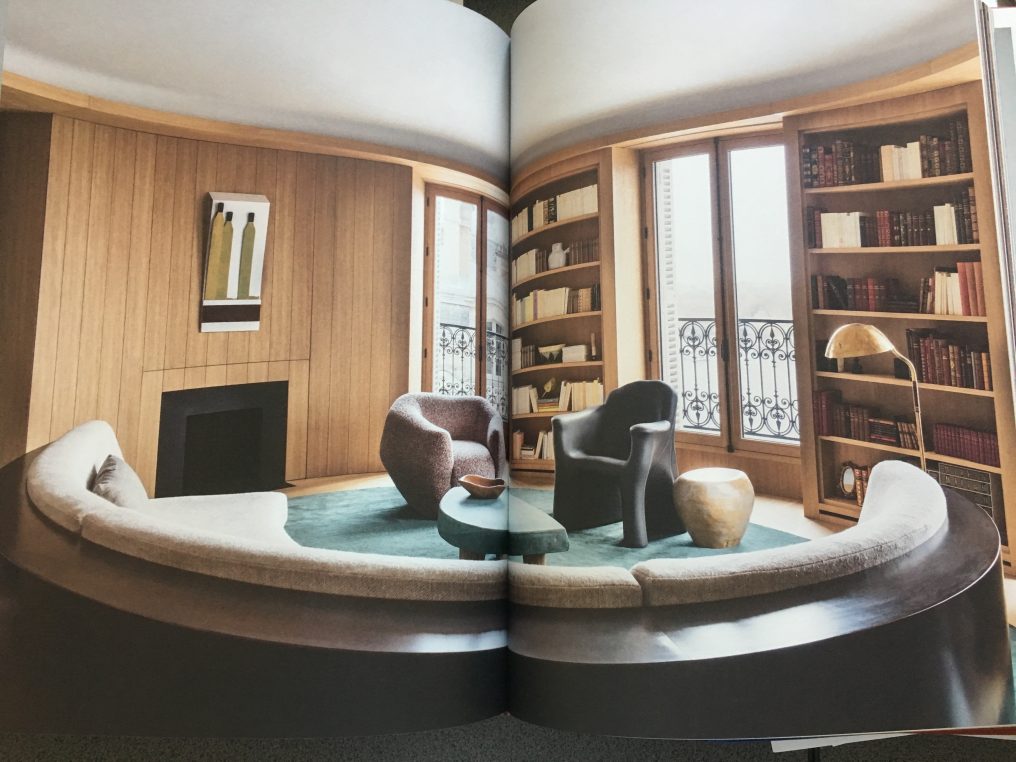 A clever way to rejuvenate this library on quai Voltaire

Pierre Yovanovitch’s talent resides in his taste and his pick of artisans and objects. He started his career as a fashion designer for Pierre Cardin in 1990 and opened his own agency in 2001. His strength is to mix vintage lamps and furniture that he finds at antique dealers around the world, with his own designs and great workmanship. A chalet in the mountains, a vineyard in the Douro valley, a house in Chelsea, all have in common the same light style, original sofas, vintage lamps and tender armchairs. And he likes to work with his clients’ contemporary art collections in mind.

At the end of the book, he pays a tribute to his team of 47 designers and 11 close friends and to his partner, Matthieu. The party felt like this: a reunion of all the people he loved and a tribute to long lasting relationships. 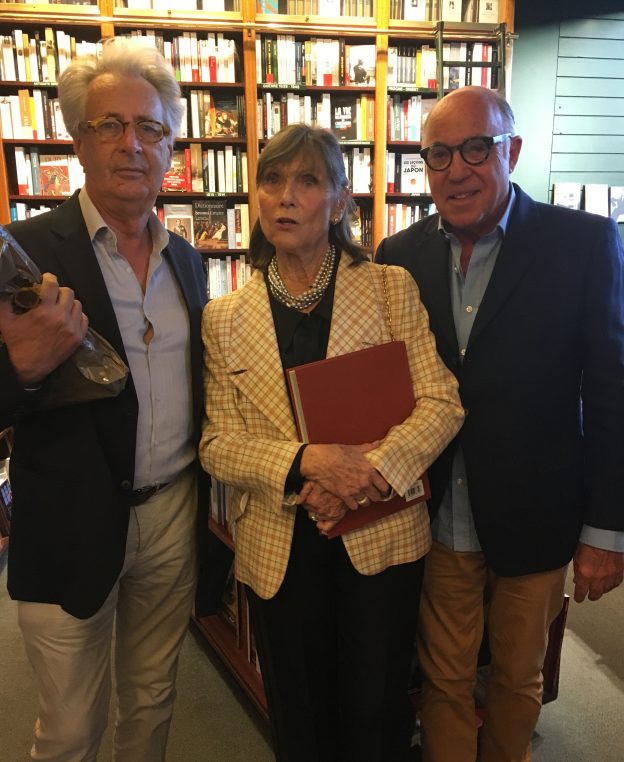 His mother was there, very elegant and asked to be called Jo!

There are fourteen houses or apartments featured in the book designed in France, Brussels, Andermatt Switzerland, Portugal, Israel, New York and London. All have in common a lot of wood and delightful comfortable armchairs. Have a look at the book at Galignani’s you will be conquered. 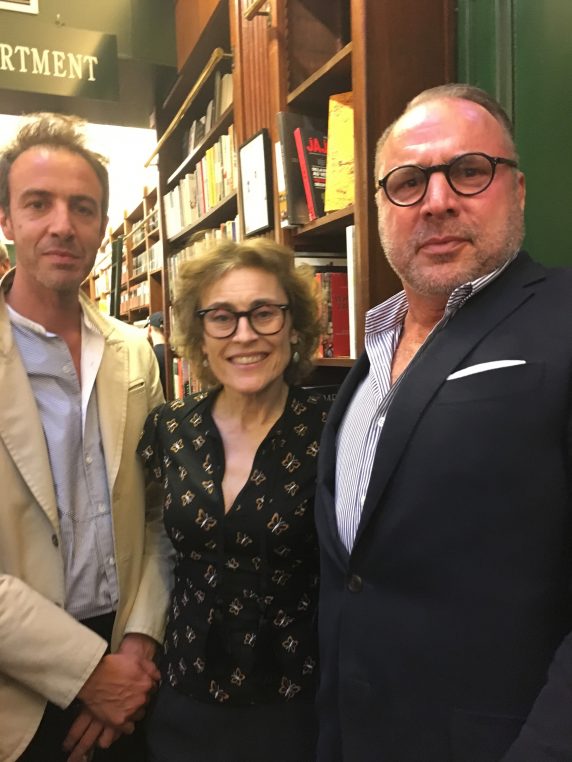