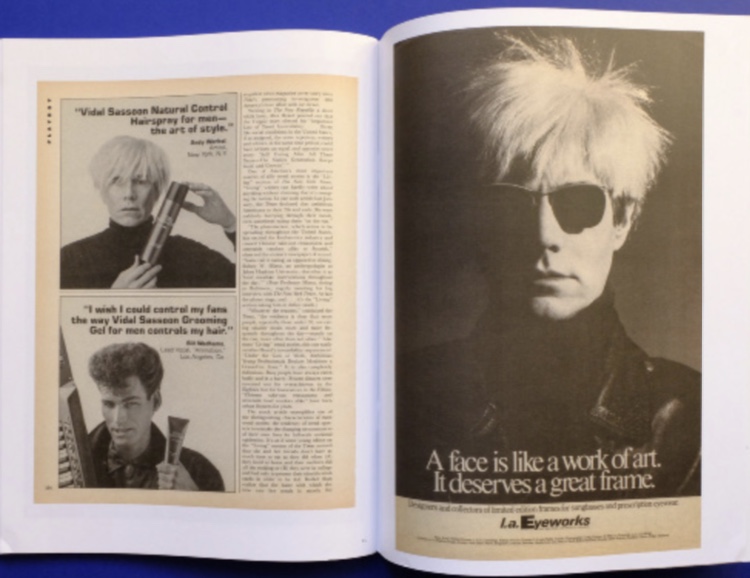 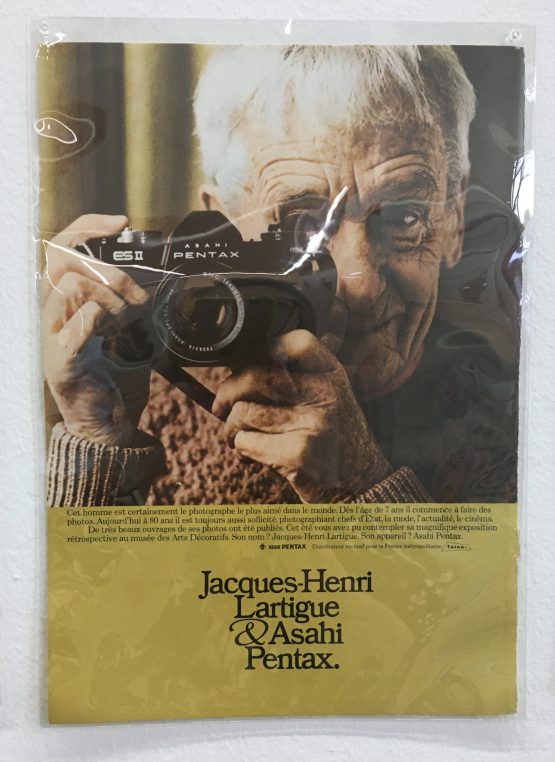 Jacques Henri Lartigue in an advertisement for Asahi Pentax, 1975, is exhibited at Centre Pompidou on the 4 th floor

Bob Calle would be happy today. Six years after he left us on April 6, 2015, this oncologist turned art lover and creator of the Carré d’Art in Nîmes, is celebrated through a third Prize for Artists’ books conceived with and organised by his widow Laurence Dumaine Calle. The selecting committee, made of 15 experts who come from all over Europe, has picked 51 books among which one was chosen among 18 nominees, by Vera Michalski, Jean Michel Alberola, Philippe Apeloig, Alexandra Baudelot, Bernard Blistène, Théophie Calot, Jean de Loisy and Bertrand Schefer. The laureate is Pierre Leguillon for his book “ADS.” published in Brussels by Triangle books. And anyone can buy it for 30€! The Prize is sponsored by Fondation Jan Michalski and hosted by Ecole des Beaux Arts de Paris. 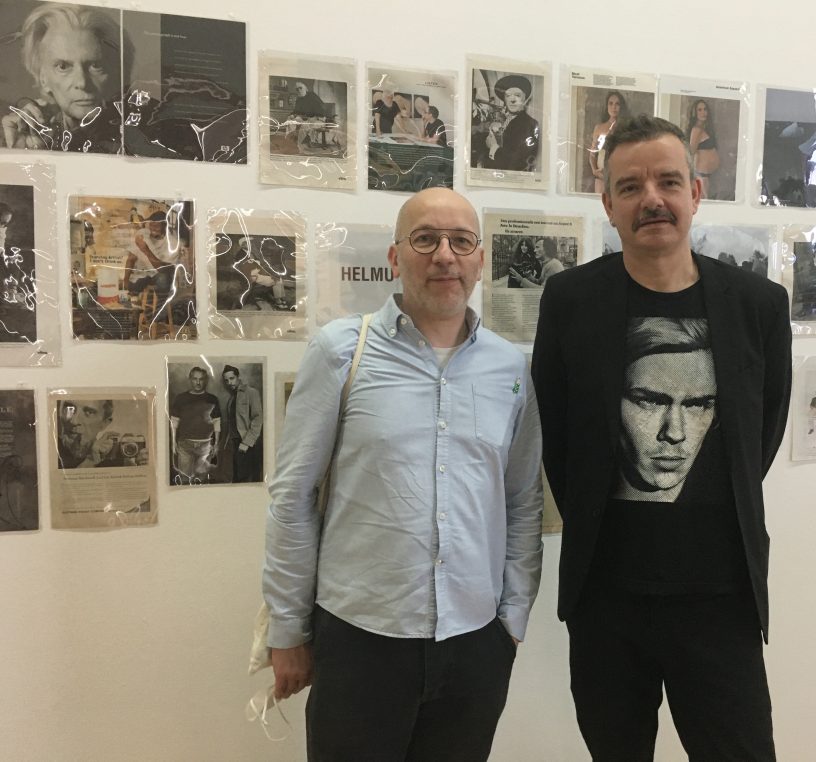 The extreme quality and great diversity of all books made it hard to choose. Does one want something completely minimalist or something more commercial? A huge book impossible to carry or a tiny one which you can hardly read? But the jury ended up being unanimous on ADS. a collection of torn pages from magazines collected over twenty years by Pierre Aguillon. The greatest artists and photographers feature recommending Sony television sets and Vidal Sassoon hairspray (Andy Warhol), Vitra chairs (Tomi Ungerer), Marc Jacobs clothes (Cindy Sherman), Absolut Vodka (Julian Schnabel), and many other items with Helmut Newton, Jeff Koons, Louise Bourgeois, Salvador Dali, Jean Cocteau, etc. Andy Warhol features in seven ads. Salvador Dali in four. 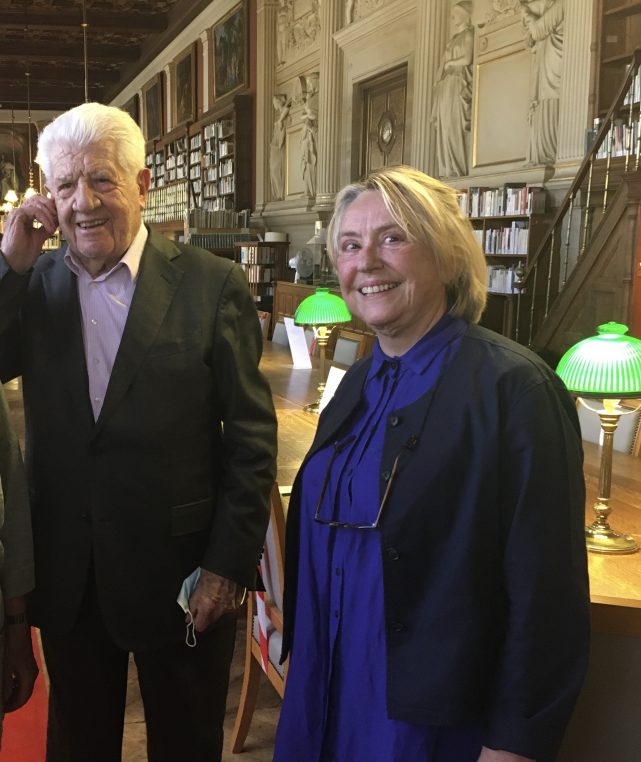 Bob Calle was running the Institut Curie, a leading French cancer center, when his good friend Jean Bousquet-Cacharel, then mayor of Nîmes, asked him to create a museum for contemporary art. Bob was friends with so many painters and such a sharp collector himself that he could lead this dual life as a doctor and art curator. From 1986, when he retired, to 1993, he prepared the collections of works and this led to the creation of Nîmes’ spectacular Carré d’Art built by Sir Norman Foster who has now become a Lord. 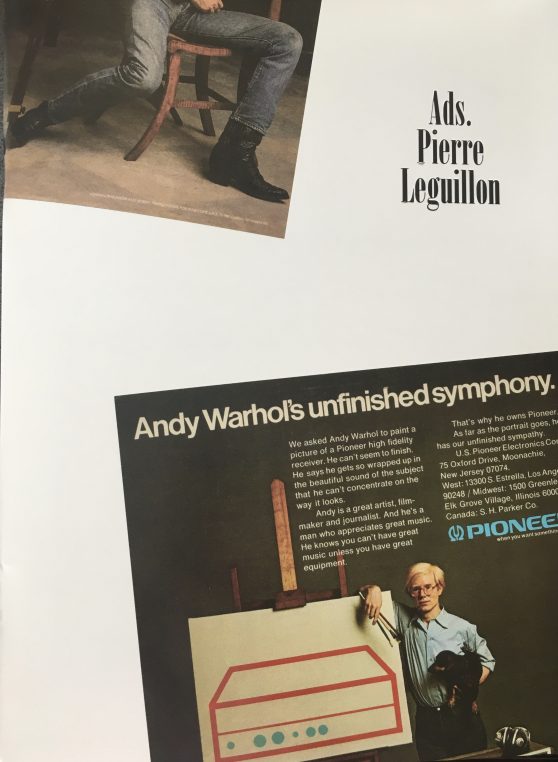 Ecole des Beaux Arts de Paris is partners with the Bob Calle Prize which is awarded in its beautiful amphitheater every other year. A film made by Valérie Mréjen and Bertrand Schefer about Pierre Aguillon’s collections was screened there. And the great surprise this year was to be able to go to Centre Pompidou on the 4 th floor of the Museum of Modern art and see all the ads printed in the book plus two, which were recently acquired. Helmut and June Newton advertising for Rolex gold watches is a historical shot! This is all thanks to Bernard Blistène director of the Museum of Modern Art and a member of the jury. 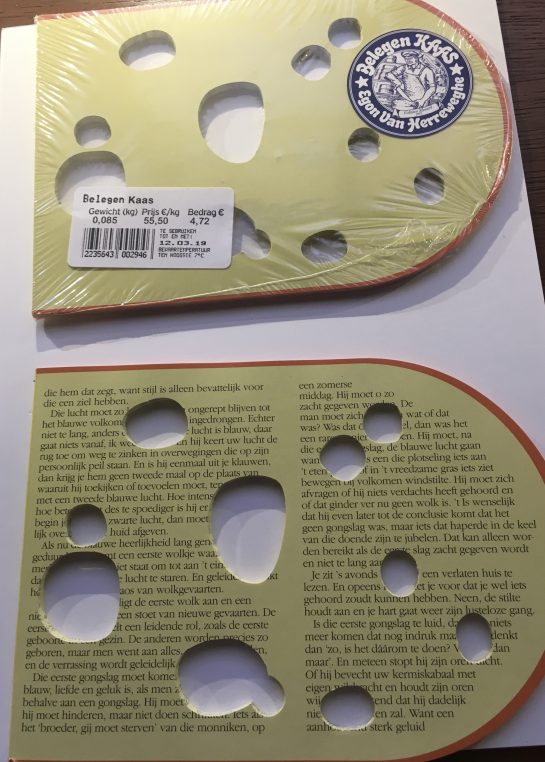 So after you buy the book from Triangle, rush to centre Pompidou (4 th floor) to see the large wall covered with the 88 plus 2 ads… And if you are an artist, know hat you can compete again for the Prize in 2023.