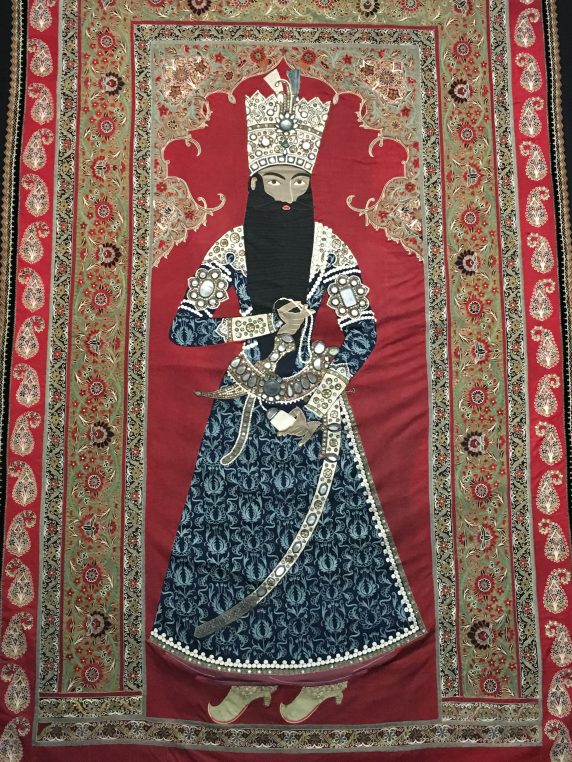 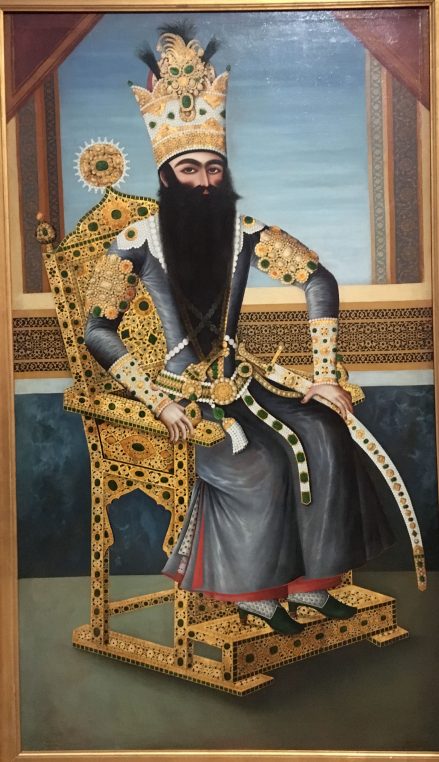 The new exhibition at Louvre Lens, “The Rose Empire” is devoted to the Qajar dynasty, who reigned over Persia from 1786 to 1925, when Reza Khan Pahlavi took over. Four hundred pieces came from 35 French institutions and private collections and twelve countries to describe the world of this family, whose descendants now mostly live in Europe and the United States. Portraits, photographs, carpets and textiles are witnesses of their great splendor. And the Louvre is exhibiting 50 chefs d’oeuvre at the National Museum of Iran. 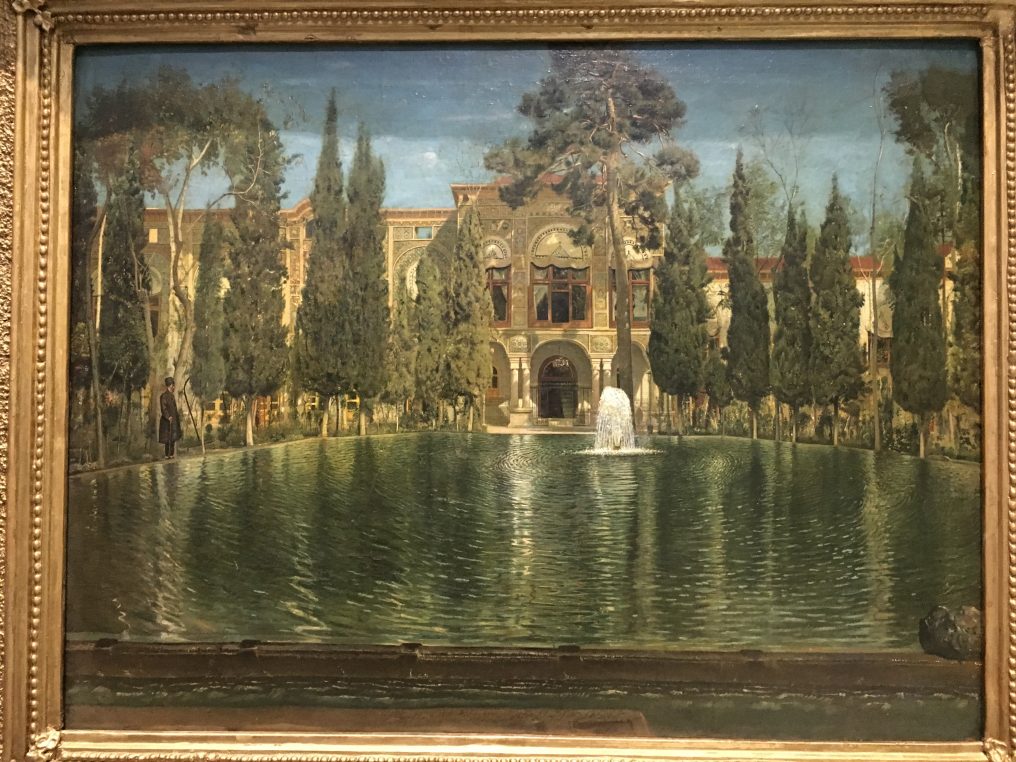 Muhammad Ghaffari Kamal al-Mulk, View of the pavilion at the Golestan Palace, Tehran, 1884-1885

The Qajars  were originally Turkmen warriors from the north of Iran, where they had settled in the 14 th century, and their leader Aqa Muhammad, a general and a eunuch, managed to unite the different tribes and seize power. Six shahs will follow and develop the country artistically, technically and politically all along the 19 ht century. 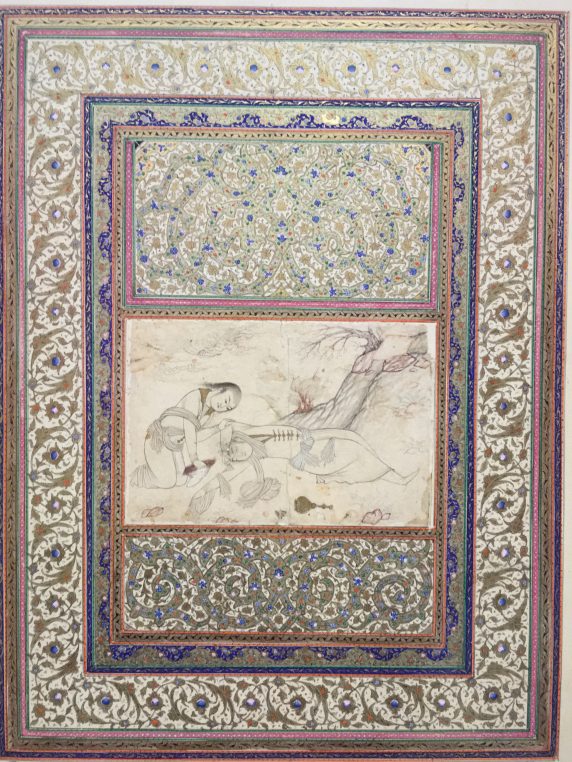 When he established Tehran as the capital, Aqa Muhammad Khan picked the Golestan palace as his official house and decorated it. Frescoes, paintings, ceramic tiles and mosaics of mirrors transformed the palace into a pure image of the Qajar style. Little pavilions were built in the gardens, one with a marble throne, being where the shah received for his audiences. The palace will be enlarged many times by the successive shahs. 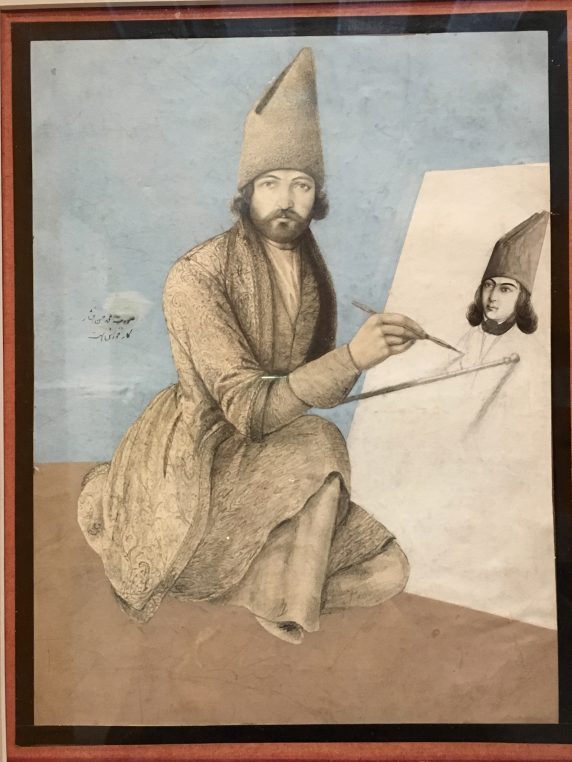 Many diplomats started estblishing themselves in Iran and the different invasions of Russians allied to the English, encouraged Naser al-Din Shah to travel to Europe where he discovered new allies and techniques and developed a passion for photography.

This new medium becomes successful in Iran as soon as Daguerre invents his daguerreotypes in 1841. Jules Richard, a Frenchman, becomes one of the leading photographers thanks to cameras given by Queen Victoria in 1844 and later Arminian Antoin Sevruguin takes more than 7 000 photographs which will be confiscated by Shah Pahlavi. Only approximately 600 have been rescued of which some are shown here. 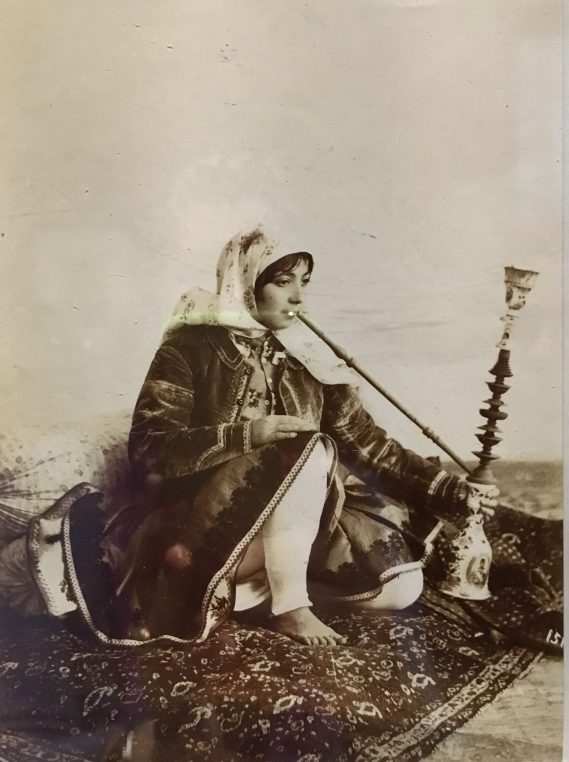 There are also many carpets and one especially with European type roses was made in Kirman, in cotton and wool, for the royal palace by Husay Kirmani. 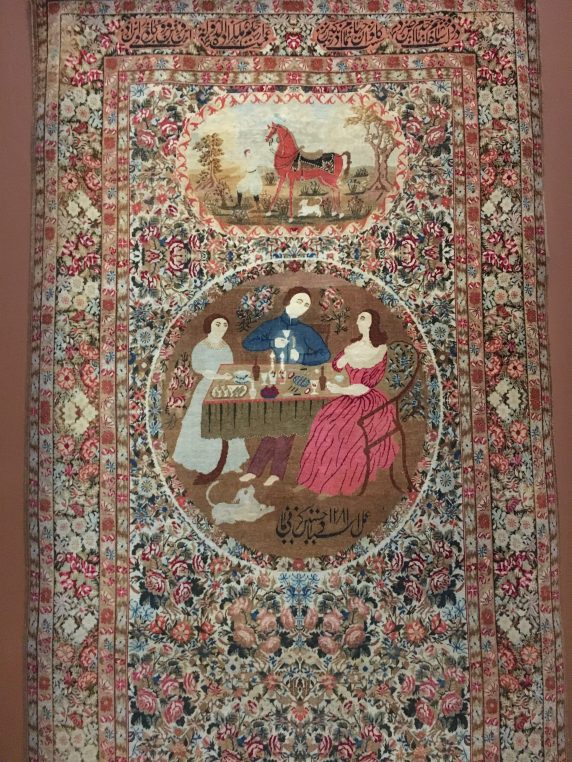 And one of the most striking paintings is a “grisaille” depicting Ali, the prophet’s son in law with his two sons, Hasan and Husayn, a lioness, a little lion and a predator. The painter Ismail Jalayir was very mystic and loved painting religious themes. It is quite a modern and astonishing work. 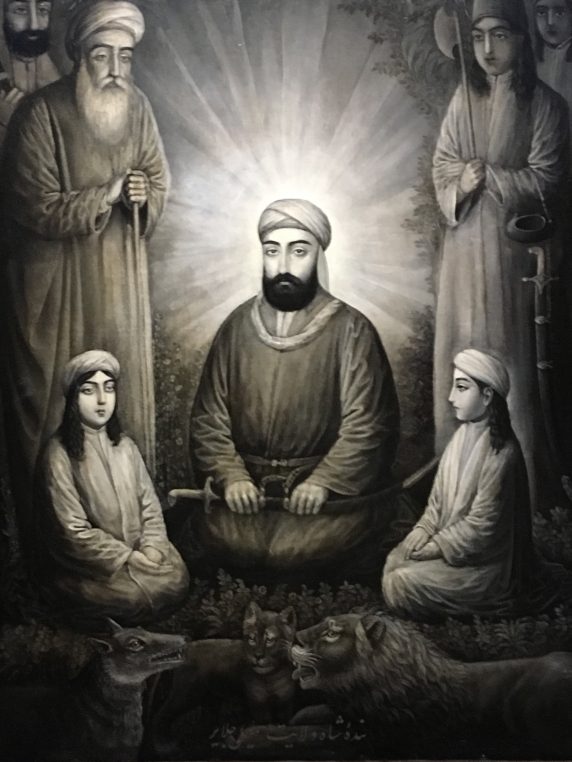 Ismail Jalayir, Portrait of Ali, Hasan and Husayn, surrounded by angles and dervishes, circa 1870

A whole room is dedicated to musical instruments and portraits. Nasir al-Din Shah brought a French music master Alfred Jean Baptiste Lemaire in 1868 who composed the first national anthem. Dancing is also encouraged and there are numerous paintings representing dancers. In the last room a very large cristal candelabra made by Baccarat in 1867 for the shah, gives an idea of the magnificence of decors at Golestan Palace. 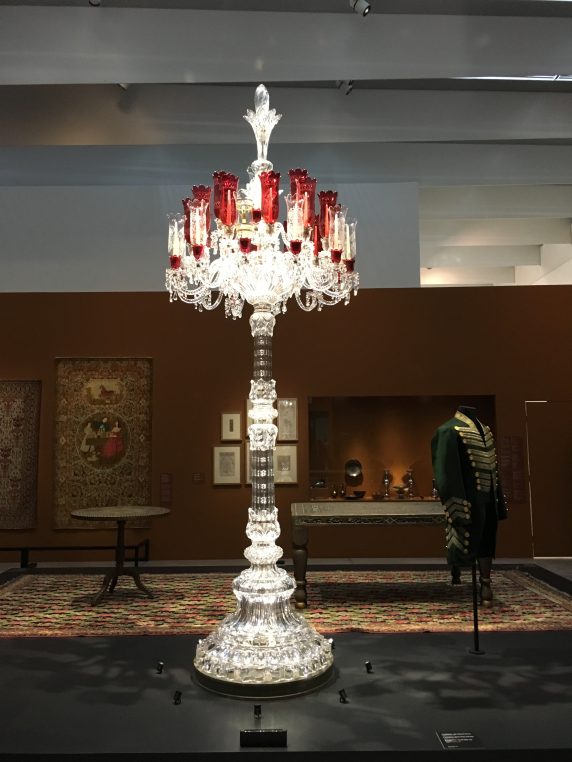 Since Christian Lacroix was responsible for the scenography, there is a large showcase of ladies’ dresses and court coats for men. While they were covered with a chador when they went out, Iranian women wore very pretty open blouses and short skirts at home that were inspired by the ballet dancers the shah had seen at the Paris opera. The costume designed by Lacroix for the ballet Sheherazade opens the exhibition, a sign of the continuing cultural relationships between Iran and France today. 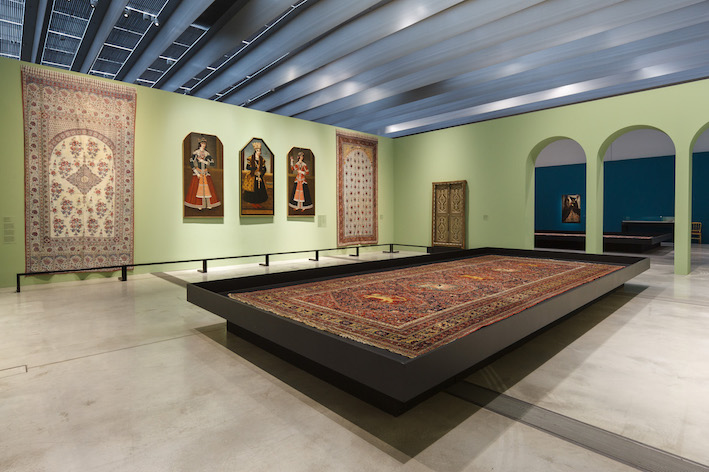 One of the superb rooms at Louvre Lens

On some of the paintings the ladies have joining eyebrows, a beauty fashion that was started in the mid 19 th century. Kohl was used to join the eyebrows (Frida Khalo style) and sometimes they even added a slight mustache, imitating very young men who were considered, as the curator Gwenaëlle Fellinger,  told us, the ultimate attraction. 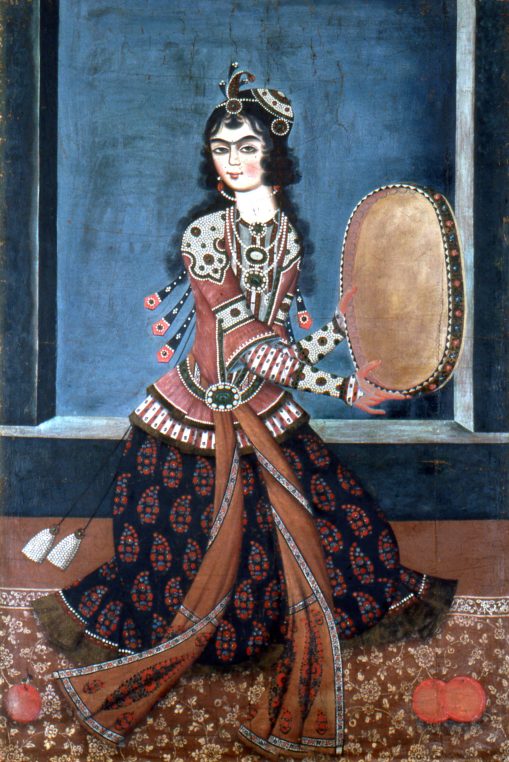 One learns an awful lot in this show which makes you want to travel to Iran immediately. I was a bit frustrated though, not to see more photographs or films of the countryside and of Qajar buildings today. There is a lack of dream and magic in this exhibition which takes place in the sublime Louvre Lens designed by Sanaa. There is not a museum show today where video is absent and it would have been divine to be taken on a little tour of the main Qajar cities. Next time maybe? 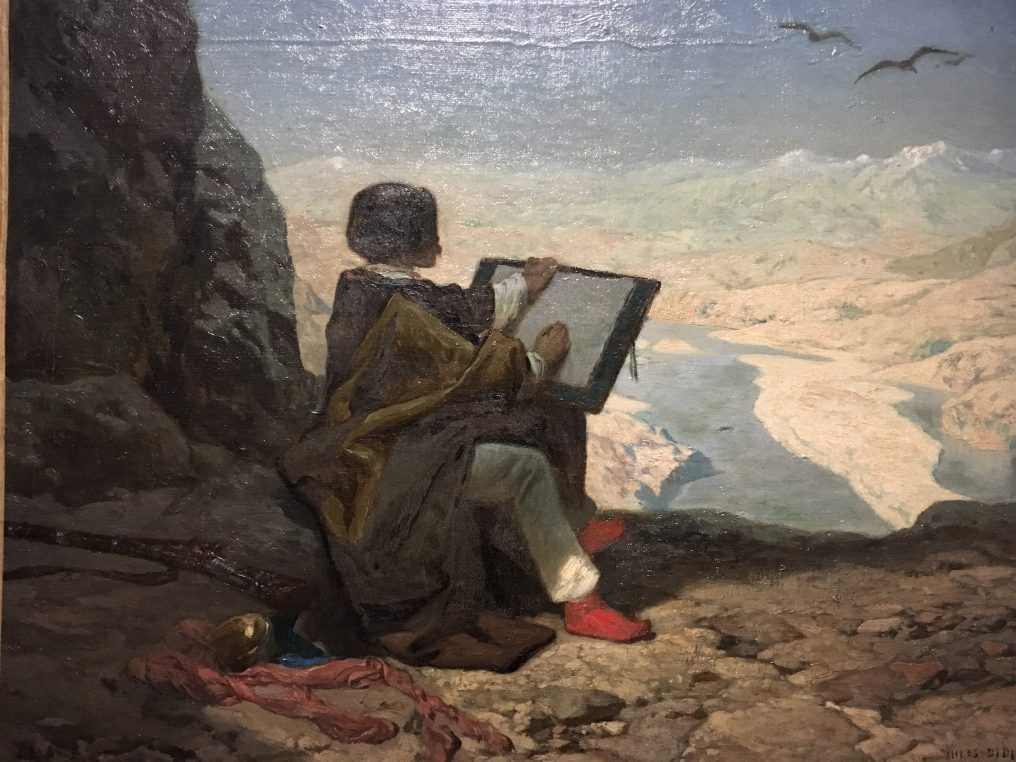 Louvre Lens until July 23, is one hour fifteen minutes from Paris by train. Entrance is free on Easter week end.

And on the Iranian painting front, don’t miss the Y.Z. Kami exhibition at Gagosian Paris; “Geometry of Light” is a fascinating series of visually mysterious works by a leading Iranian artist who lives in New York.

One Comment on “The Qajar dynasty in Iran, more than just warriors”