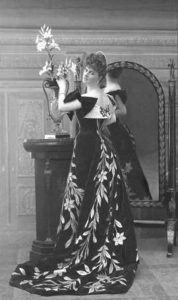 Comtesse Greffulhe photographed by Nadar in Worth

Marcel Proust is very much in fashion in France. Is it the socialist government who needs to dream about the Belle Epoque or is snobism just an escape from dreary daily life?
One thing is sure, the biography of Comtesse Greffulhe by Laure Hillerin (published by Flammarion) was a hit for Christmas and its career keeps on growing thanks to a series of « musical evenings » organised in private houses in Paris. 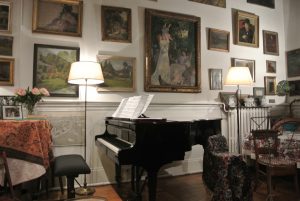 A beautiful Steinway in an artist’s studio near Pont Royal was the key to success last night. The actor, Clément Goyard was a perfect Proust and Chloé Donn a lively Comtesse, but mostly the amazing letters read with music by César Franck, Gabriel Fauré and Erik Satie, were sending us back to the fastuous 1900’s.
Comtesse Greffulhe was one of the society ladies featured as Duchesse de Guermantes in « Remembrance of things past » by Marcel Proust. She also happens to be my great grand-mother…
Her very aldulterous husband, Henry Greffulhe, spent his life shooting and womanising. And being jealous of her successful salon. She was beautiful, a good painter and she focused – with her friend Robert de Montesquiou – on sponsoring Wagner and the Ballets Russes, entertaining great scientists and defending Captain Dreyfus, which was not common in high society at the time. She never read Proust who was obsessed with her and gave her an eternal life in his works as did Nadar with his photographs of her in full beauty.
Next year, Palais Galliera in Paris and the F.I.T in New York, will present an exhibition of her dresses designed by Worth and Fortuny. If you read French, the biography will bring you a sense of how a pure aristocrat with a lot of money could take over political and artistic life in Paris ! 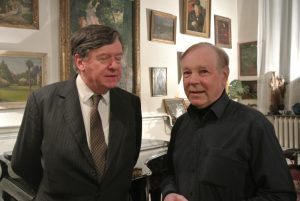 Comte Armand Ghislain de Maigret and Jean-Louis Poirey both knew Elisabeth Greffulhe as little boys and had never met before!