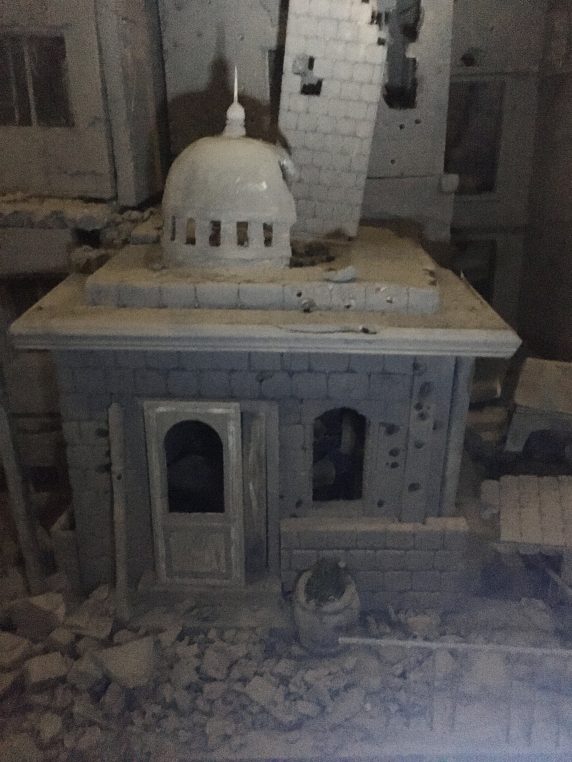 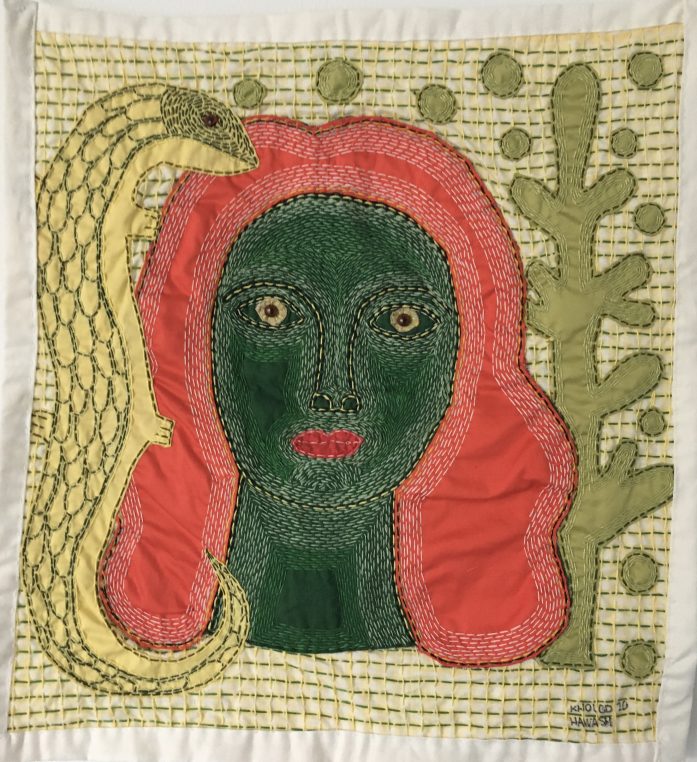 It is a very brave adventure that Pauline de Laboulaye, president of the Association “Portes Ouvertes sur l’art” (Open doors on art) is leading with a group of art passionates from defunct La Maison Rouge. Their latest exhibition at Cité Internationale des arts is curated by Nora Philippe and open until July 10. Fifteen artists from Syria, Palestine, Lebanon, Irak, Iran, Congo, Ehiopia, Algeria, Tunisia and Morocco have found a perfect gallery in this building overlooking Ile Saint Louis, which traditionally hosts foreign and French artists for up to a year. Their common denominator is a desire to recreate their world in a different country. The chef d’oeuvre of the exhibition is the destroyed city inspired by La Ghouta in Damascus, patiently rebuilt in the last two years by Syrian artist Khaled Dawwa, “This is my heart”. It is a masterpiece looking for a home. 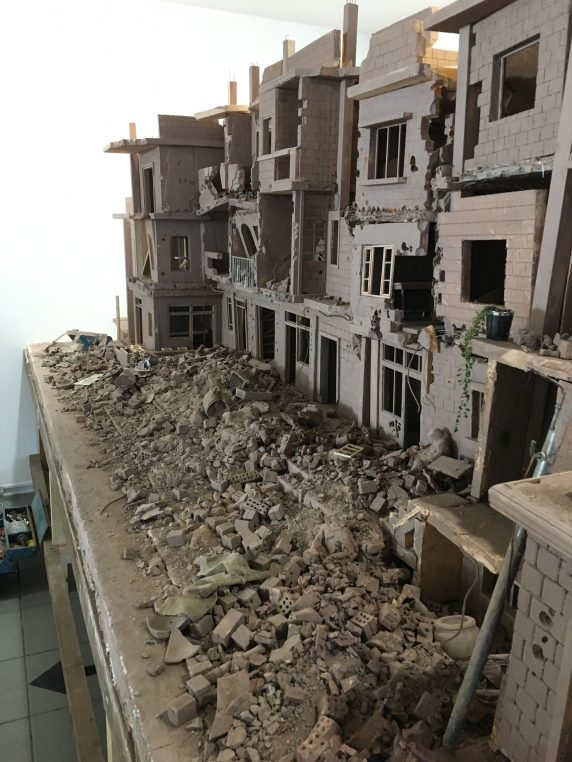 Khaled Dawwa is a very talented sculptor whose strange men we had already noticed two years ago in Parisdiary. Here, he has a very large installation “This is my heart”, which recreates a city in Syria, the heart of anti government resistance,  which was methodically destroyed by chemical attacks in August 2013. He has spent many nights working and sleeping on the premises at Cité des Arts, building this large sculpture of ruins, full of details of worn out furniture in the destroyed houses, which is now looking for a museum to house it. Why not Musée national de l’Emigration at Porte Dorée?

Iraki embroiderer Kholod Hawash was forced to flee Bassorah in 2017 and was rescued by the association “Artists at risk” who found for her and her husband a safe home in Helsinki. Her embroidered paintings are among the most moving of the show and are being exhibited at the moment at the museum of Art in Finland. 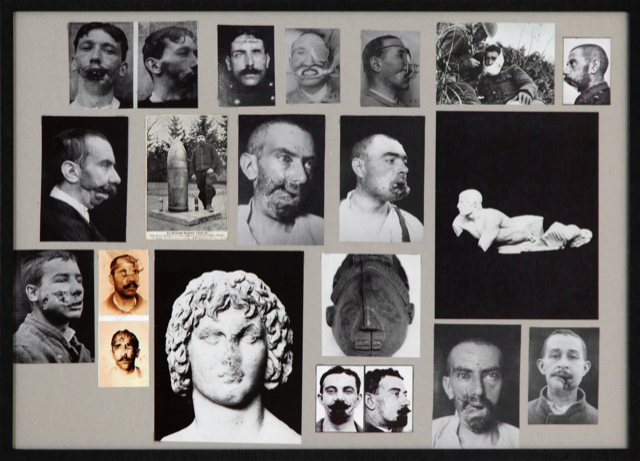 Khader Attia is  the most well known of all artists. Born in France, he lives between Berlin and Algeria  and is represented by Galleria Continua. His photo montage of Gueules cassées, a mix of wounded soldiers from the First World War and ancient broken statues, is very efficient as a study of traumatisms and fears. An exhibit on the same theme, “Blessures et Cicatrices” (wounds and scars)  took place in Lausanne at Musée Cantonal in 2015. 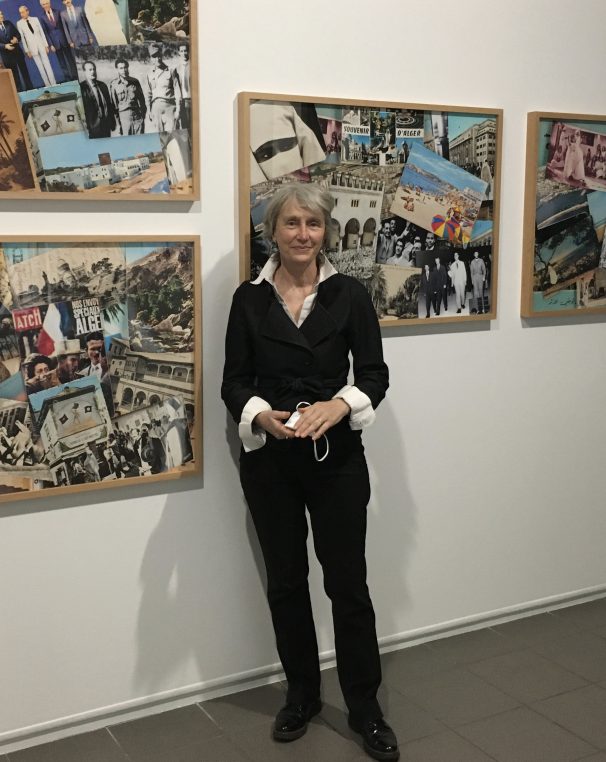 Maya Yammine, a Lebanese artist who lives in Rouen in Normandy has used her mother’s trousseau of embroidered table cloth and cotton place mats and worked on them to enhance memories of her family. Twelve round stitched pieces represent the twelve months of the year and is called “Calendar”. The designs are influenced by diverse countries and date from the beginning of the 20 th century. They represent well the theme of the show, which is all about stitching and sewing life abroad, with remembrances and family histories. She also shows an unstitched tablecloth. She was awarded the Boghossian prize in December 2020 with a residence at Villa Empain in Brussels.

Farah Khelil uses her bed tables to show photographs and little objects from her family in Morocco, Sammy Baloji is a photographer who combines 19 th century black and white photographs with contemporary similar scenes from Belgian Congo. He was exhibited at the Africa Museum in Tervuren, Brussels. Sara Ouhaddou, is Franco Moroccon and uses fabric made with the gum of old tires which she has embroidered by workers from Tetouan, with cotton threads and transforms into celestial nights. She is represented by Galerie Polaris. Ethiopian artist Yacub Bizuneh shows a video “Unheard Voice” a tribute to George Floyd’s martyrdom.

Azza Abo Rebieh, is Syrian  and was born in 1980 in Hama. She engraves dark and poignant prints of her fellow prisoners and is inspired by Goya’s twenty two engravings of  “War disasters” (1810-1815)  and has shown work at the Drawing Center in New York as well as the British Museum. She is exhibited in Beyrouth by Galerie 392.

Some of these artists are available on Artscoops, an online auction website created in Beyrouth by Maya Mamarbachi and her daughter Raya and dedicated to Middle Eastern artists.

One Comment on ““Répare-reprise”, Repair and stitches, Middle Eastern artists in exile show in Paris”