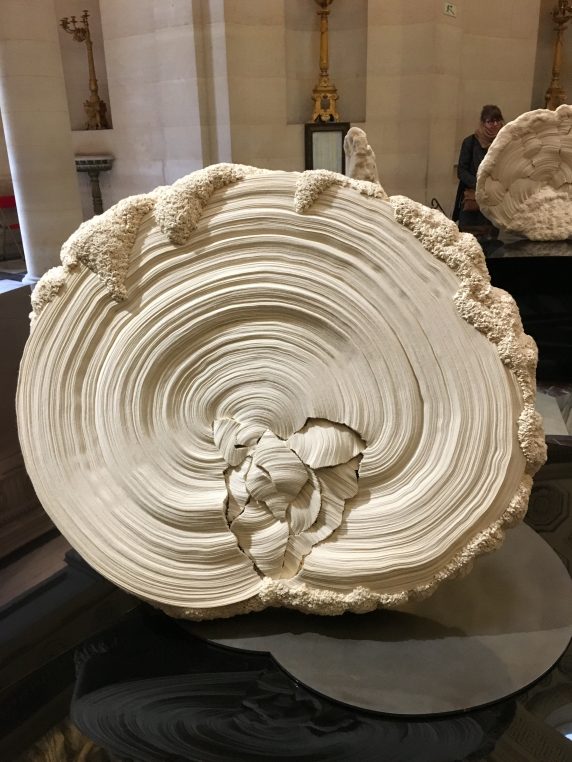 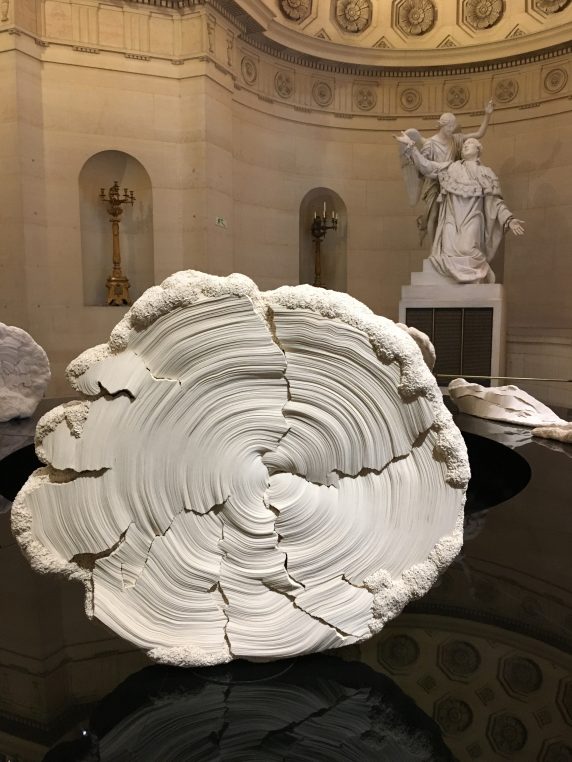 Croissance, a cotton sculpture with the statue of Louis XVI in the background

It was a magical surprise to discover in a fairly unknown monument of the 8 th arrondissement, la Chapelle Expiatoire, a genius sculptor who uses folded cotton strips to create the most extraordinary works. When I entered the round chapel, I first thought I was seeing ceramic or light stone sculptures. The work and patience involved in folding kms of cotton are magical and these pieces are only visible until December 16 th, in square Louis XVI. Do not miss it, it is a soothing and enlightening experience. 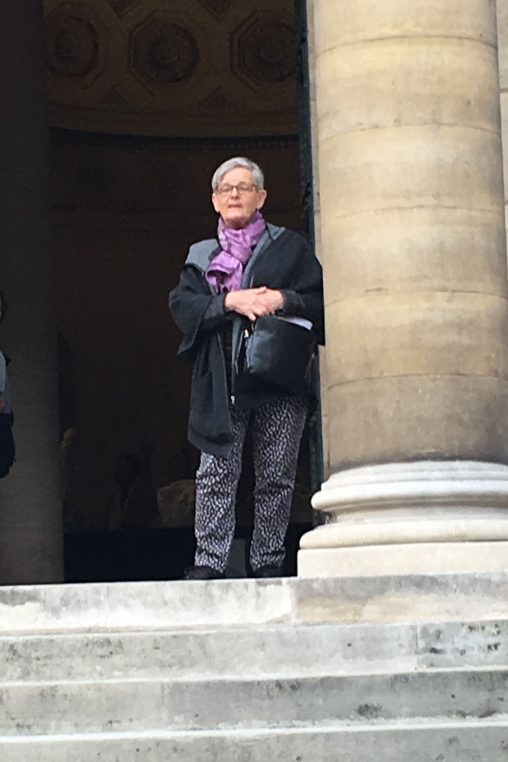 It is thanks to Fondation Ateliers d’Art de France, which delivers a prize every three years to an artist, that we can discover this amazing and unique technique used by Simone Pheulpin, 2015 laureate. She was a tennis teacher by training in La Bresse, a ski resort near Germany,  and started folding cotton in her thirties. She uses only pins and non starched local fabric and is inspired by bird’s nests, fossils, light, nature in general and meditates while she works. 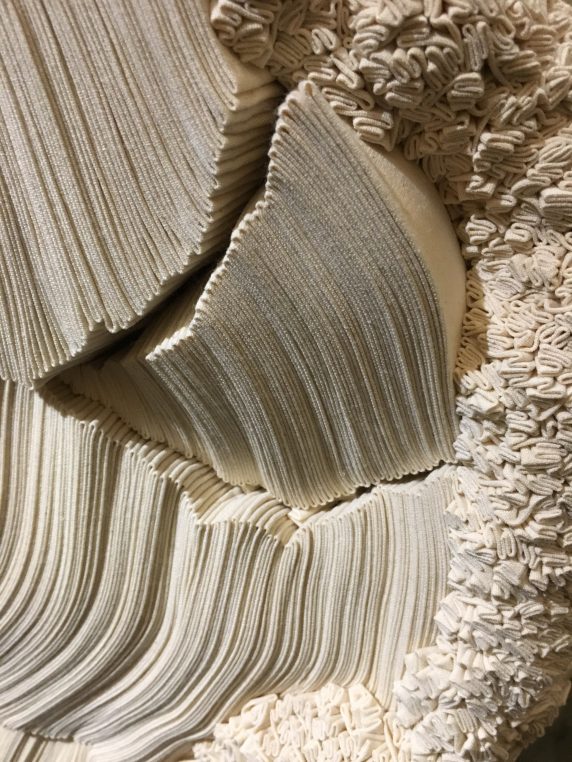 The largest of the thirty works shown here, Eclosion XXL (extra large) was made especially for the show and took nine months to complete, with 3kms of cotton and 5 kgs of pins. It is a sacred and majestuous piece which sits below the altar of the chapel. This place was built in memory of Louis XVI th, Marie Antoinette and their children killed in the French Revolution. this is where they were first buried until their remains were taken to Saint Denis Basilica. 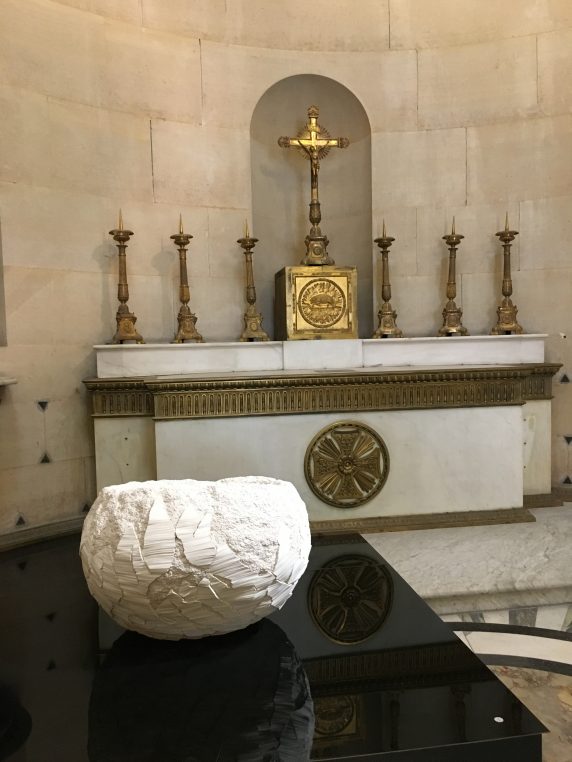 Eclosion XXL, this piece took 9 months to complete with 3kilos of pins  and 5kms of cotton

The notion of time is very important to Simone Pheulpin and the repetitive movement that she uses to fold the cotton is the concrete image of time passing. She admitted that when she is anxious or worried, her pleats are more dense and her moods are inspired by what she has been doing just before working or by music and radio she listens to while pleating. 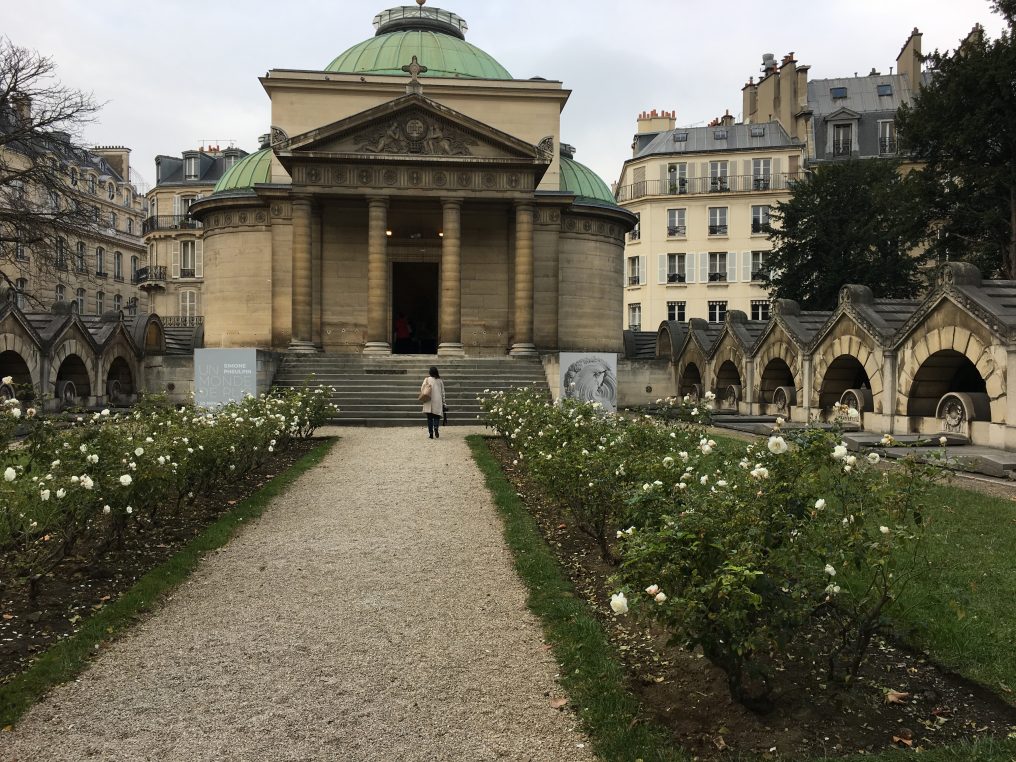 Her gallerist Florence Cuillier-Bernard was telling me that many foreign collectors have bought her sculptures in the last 30 years including the Grand Duchy of Luxemburg and one of them is also a Camille Claudel collector. Strangely enough Camille Claudel used to spend vacations in the very village, La Bresse, where Pheulpin lives in les Vosges, a mountainous region east of France. 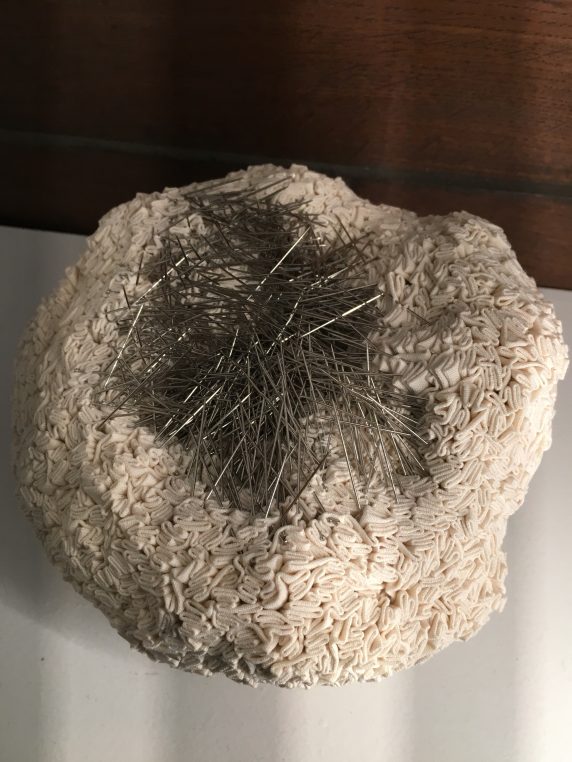 One can see the technique used by Simone Pheulpn, with pins and cotton for a bird’s nest

One day when she tried to get sponsoring from Bohin, a French manufacturer of pins, who gave 100 kgs of pins for this show, they told her hat the pins could not be seen so they had no interest in helping her. So after having had an x ray for a broken ankle, Simone Pheulpin asked her radiologist to x ray one of her sculptures. The result is this amazing photograph of pins, which in itself is a work of art. And Bohin understood! 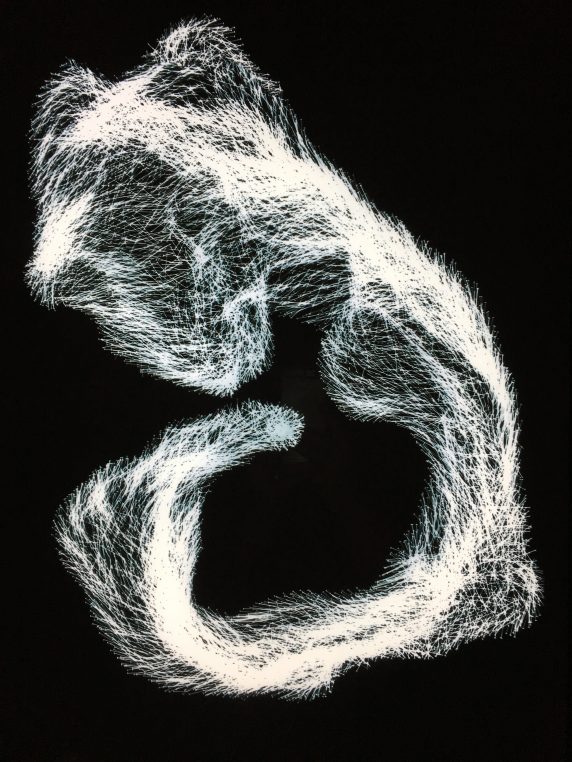 The pins can be seen on this radiography of Bracelet, one of the sculptures

What I love about this artist, is that her talent is natural and her unpretentiousness totally charming even though her sculptures sell for over 10 000€. Her art is the result of a need that she has of expressing her poetry and her love of nature, her philosophy also. These thirty works have matured over thirty years and as her gallerist from Maison Parisienne was telling me, there are not so many works left to buy. Production is very slow, obviously. 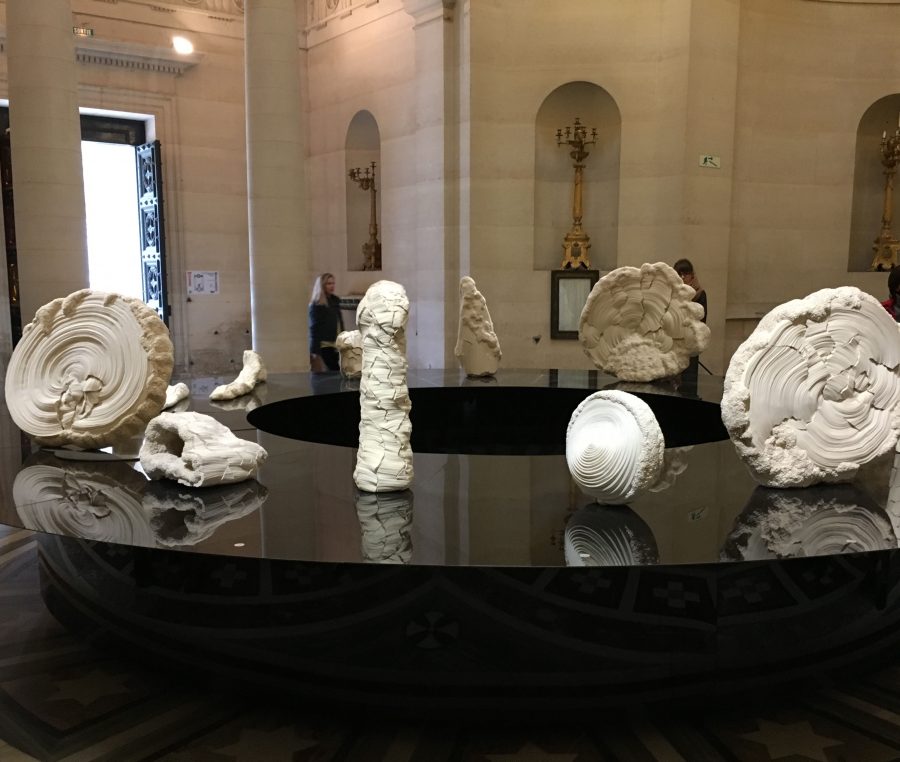 The scenography of the show, done by Agent M,  is brilliant and simple and the dialogue between the artist and the chapel is perfect and intimate. Do not miss this nor the film produced by ARTE, in the hallway, showing how she uses the pins! (Chapelle Expiatoire, 29 rue Pasquier, Paris 8th)

And if you have missed this exhibition make sure to go to ArtParis this Spring at Grand Palais: Her galerist Florence Guillier-Bernard will show her in her booth of Maison Parisienne.

One Comment on “Simone Pheulpin sculpts with folded cotton”