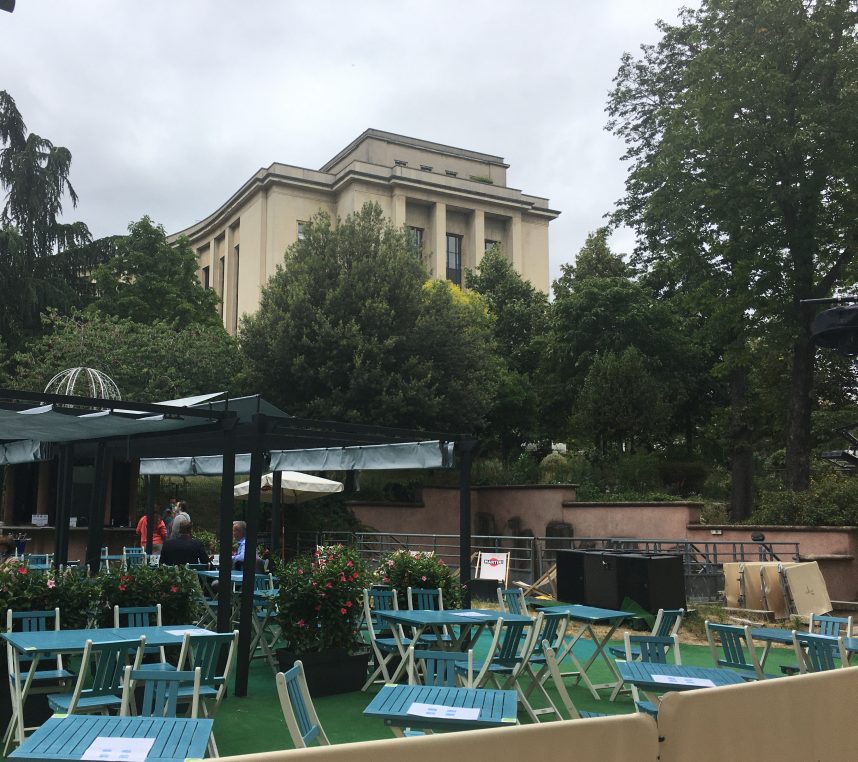 It’s a pity that l’Aquarium Paris did not put a little bit more effort in the temporary decoration of its summer restaurant, Taishô, named after the 1920’s era in Japan. A few bamboos and no Martini sign on the deck chairs would have helped. But it’s still a pleasant experience to have lunch outside in the garden facing the Eiffel Tower. And the excellent Japanese chef, Keisuke Yamagishi, whose cuisine I had tasted at his fancy restaurant Etude last year, was there to supervise the kitchen. 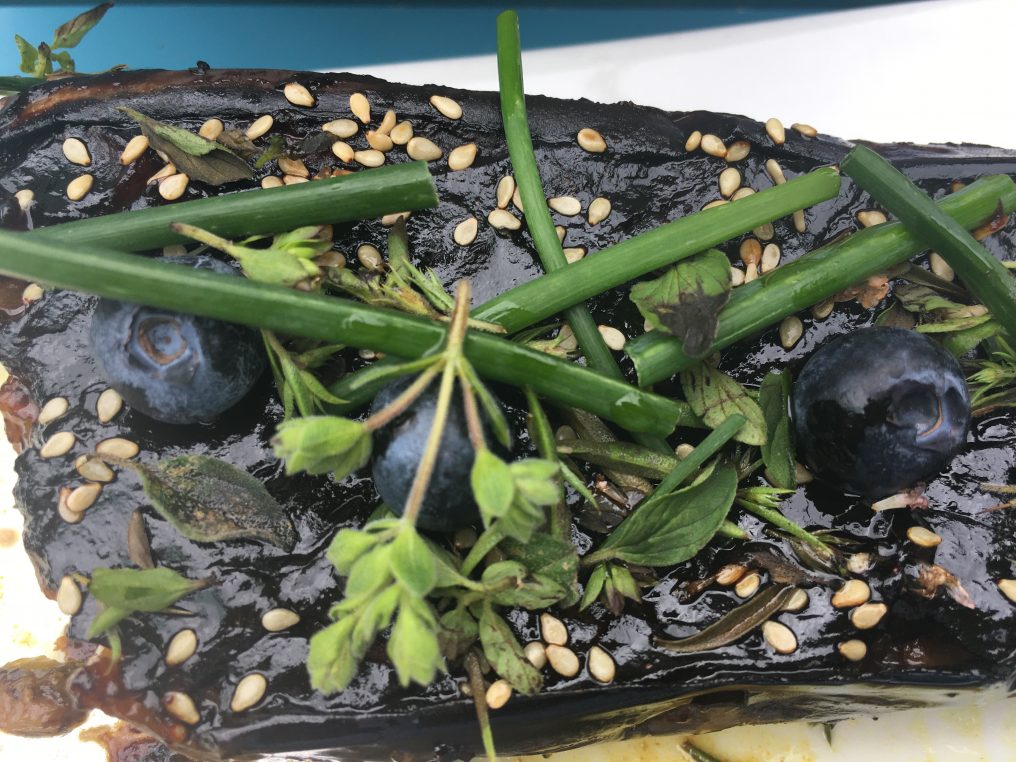 We started with a “Sashi maki tamago”, a Japanese omelet and a “Panko tori”, crusty chicken which were good and served in very pretty pottery dishes, the salmon tartar was fat and did not taste fresh enough. We then had the “Kare raisu”, a traditional beef curry, and “Nasu Dengaku” an aubergine cooked with a miso sauce to die for!!!  Desserts are not a Japanese specialty but there is a chocolate tart which looked good, the smoked tea ice cream was nothing special. 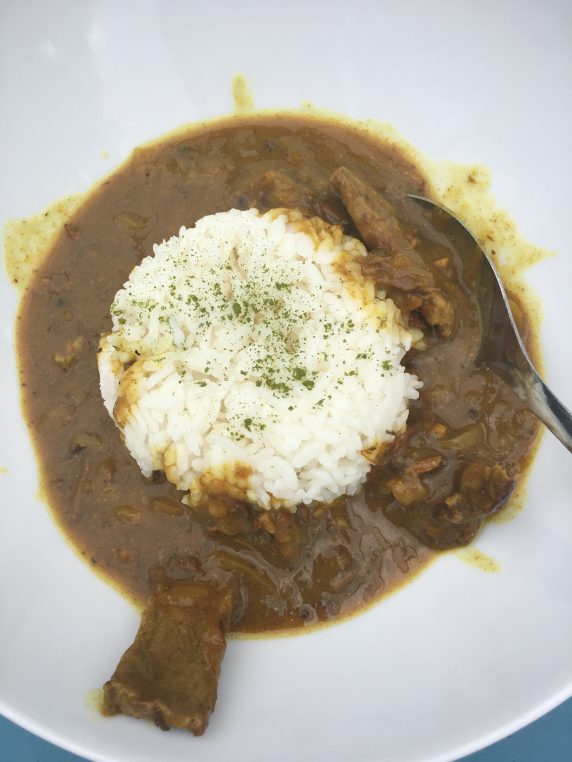 The beef curry was excellent with its shiny Japanese rice

I spoke with our neighbor, who seemed to be having lunch there often, and was commenting on the excellent Japanese rice (slightly shiny) with the curry: he happened to be the director of the aquarium which belongs to a Japanese investor! So of course we ended up visiting the aquarium where I had never been, even though it was created in 1865. It’s considered as one of the best “Japanese” aquariums in the world. 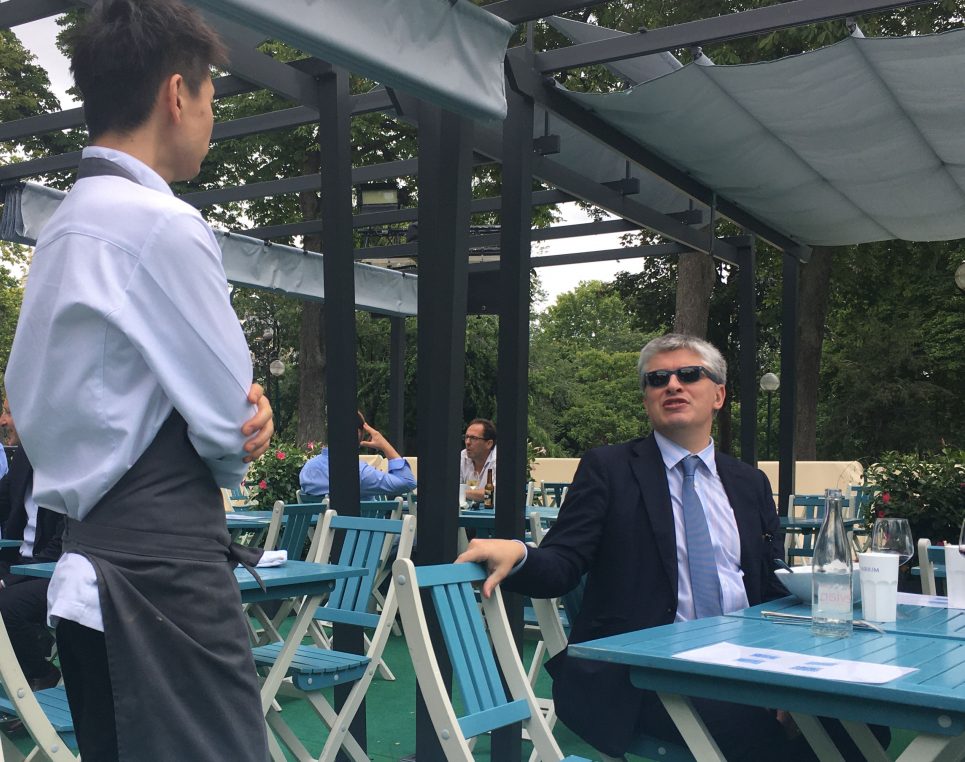 The rates on the menu are strange (overpriced 26€ for the curry  which had very little meat), appetizers are reasonable (8€ to 12€) but we ended up paying 90€ for two for an uneven lunch with no wine. The service is impeccable and very sweet, the heavy water goblets not so chic. 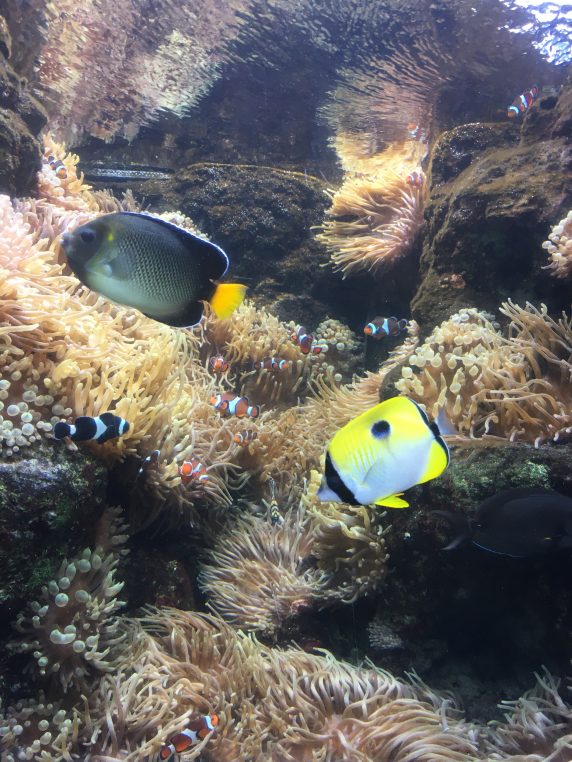 So it’s a mixed experience but they have the whole summer to improve! and it was very nice to eat outside in the gardens in an area which does not have so many lunch places except of the outrageously priced La Girafe.

Taishô, 5 ave Albert de Mun, below the Trocadero. DO NOT go on Thursday and Saturday nights because the gardens are invaded by music and party goers. There is no booking and you can easily park on avenue Albert de Mun.