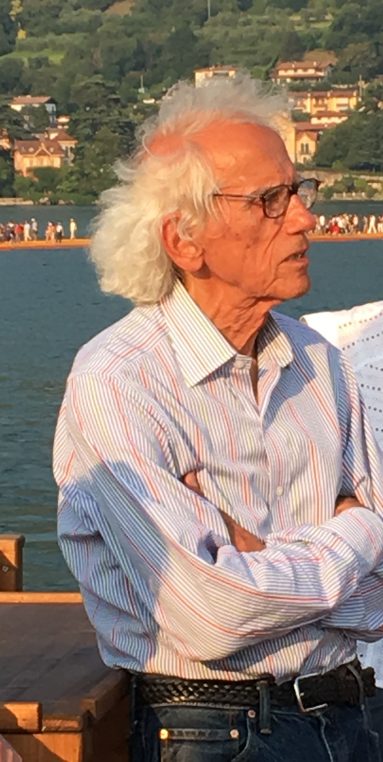 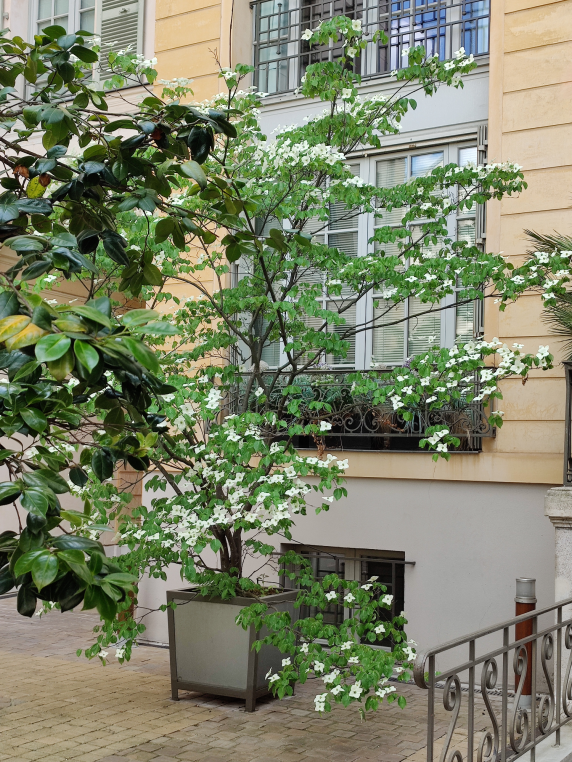 A dogwood in Paris, rue de Vaugirard, near the Luxembourg garden

More dogwood pictures are being sent to me, I realize how ignorant I was about their growing presence in France! I am told there is even one in the Jardins du Luxembourg next to the Statue of Liberty… And since it is the full season, don’t miss them, the gardens of Paris have just reopened.

The saddest news of the week if of American artist Christo‘s death on Sunday, May 31. He was confined in New York where he suffered from respiratory problems. He gave his last interview to CNN a few weeks ago and it is very moving: he shows his project for the wrapping of the Arc de Triomphe, in his 19 th century building on Howard Street, Soho. The red rope holding the floating silver and blue fabric will give it a unique look! This amazing artist lived with his wife Jeanne Claude a giant life, financing alone his huge wrappings in Berlin, London, New York and Japan… we will miss him terribly. There is an exhibition about to open at Centre Pompidou retracing his Paris years in the 1970’s and the wrapping of the Pont Neuf. And a film which you can watch. The catalog is also for sale at Galignani’s.

Christo on Lake Iseo in June 2016. He left us last Sunday

Museums are reopening one by one, starting with the Louvre on July 6 and Musée Marmottan this week, with its wonderful exhibition of Cezanne and the Italian masters. I look forward to the “Fuji country of snow” at Musée Guimet which opens on July 1 (until September 28) with etchings of the triangular mountain venerated around the world. 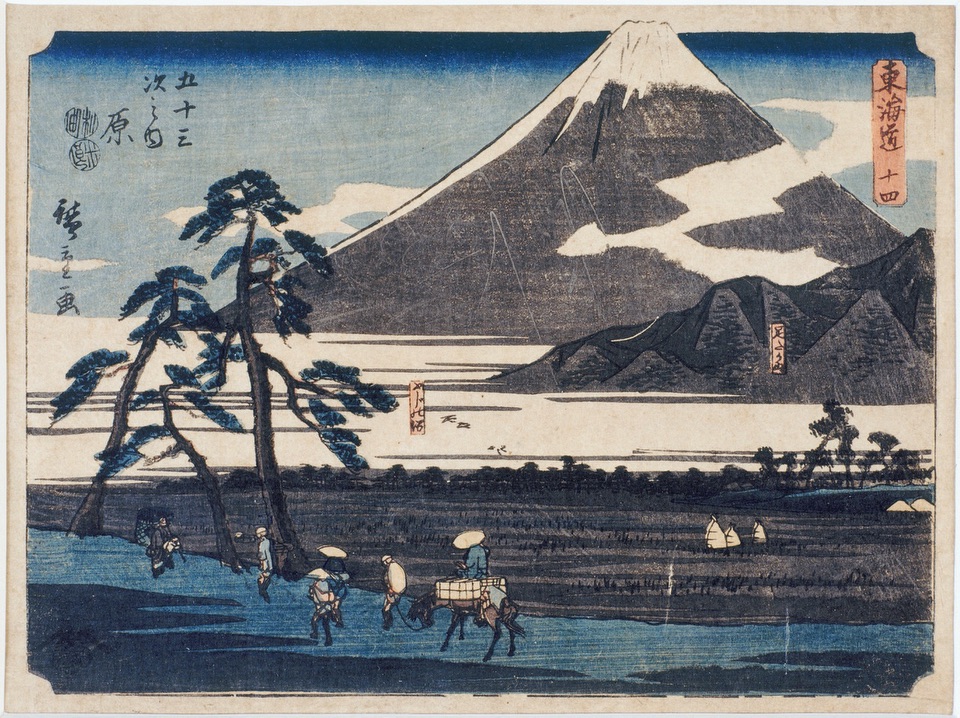 “Fuji country of snow” at Musée Guimet on July 15

I am already planning excursions around France. In the North, Musée Matisse in Le Cateau Cambrésis is open every afternoon, Musée de Flandre in Cassel and MusVerre in Sars-Poteries and Musée Saindelin in Saint Omer, which I heard about through Christophe Leribault’s Instagram account. Since Prime Minister  Edouard Philippe announced that we could drive everywhere in France, we are free to visit obscure villages and unknown museums. 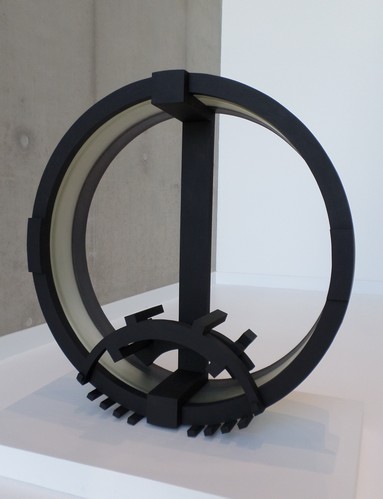 And it is time to go shopping since everything is reduced. Electric cars are almost given away thanks to government subsidies and there is no one in the stores… A sad taxi driver told me that Parisians had decided to stay away all summer. One of my passions is in the Basque country, where I always take the time to shop at Laffargue, a very high leather quality boutique which features belts, handbags and purses. Their signature relies in the nails that decorate most of their products. I’ve had a purse for 10 years now and it has not worn out nor has my handbag which I love for its modesty. Their new summer collection has arrived and you can order on their website. 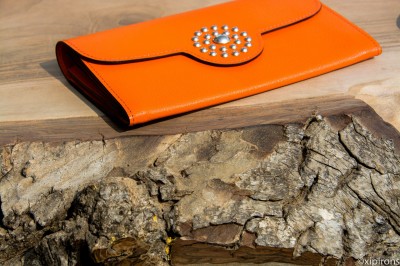 At Laffargue in St Jean de Luze, leather has remained a family affair

A much darker news is the image of the trees at La Pagode cinema, on rue de Babylone, which were cut down on May 11. I heard about this tragedy through a florist friend and le Parisien published a story on the 19 th by Elodie Soulié. It is a horrific story. The Japanese pagoda was built in 1896 by François Emile Morin, then director of Le Bon Marché, as a gift to his wife who soon left him for his deputy director. It was transformed into a cinema in 1931, was listed thanks to Jack Lang when he was minister of culture, and the Japanese garden was only “inscrit aux monuments historiques” since 1983.  The hundred year old chestnut tree, Gingko tree and weeping beech were just cut down and evacuated … What is Rachida Dati, mayor  of the 7 th arrondissement doing? 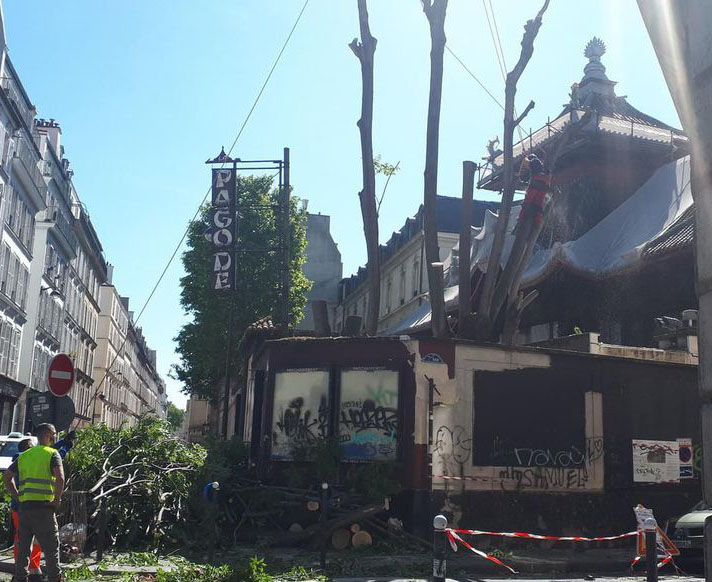 Trees are cut down at la Pagode on May 11, photo Le Parisien

This Parisian monument was bought in 2017 by American real estate developer and movie producer Charles S. Cohen, who was celebrated as the savior of the historical site and was awarded the Legion of Honor for it. And now he is destroying our heritage with his plan to make four movie theaters instead of two.

In 1972, Louis Malle was running the place transforming it into the temple of Nouvelle Vague cinema. What is Mr Cohen thinking when he cuts everything in the garden in the middle of confinement? 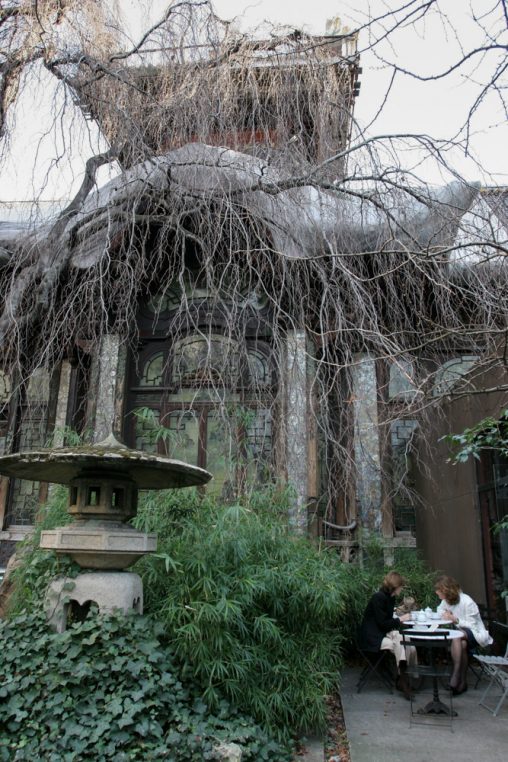 The garden at la Pagode, before

In the meantime, travelling around Europe is still very uncertain as the excellent article in the New York Times by Patrick Kingsley has stated last Thursday. Checkpoints between the different countries diverge and nobody wants to risk it… Travelling seems easy from Geneva but there is quarantine from and into Great Britain… More news next week.

2 Comments on “The lockdown is over, so what’s new?”