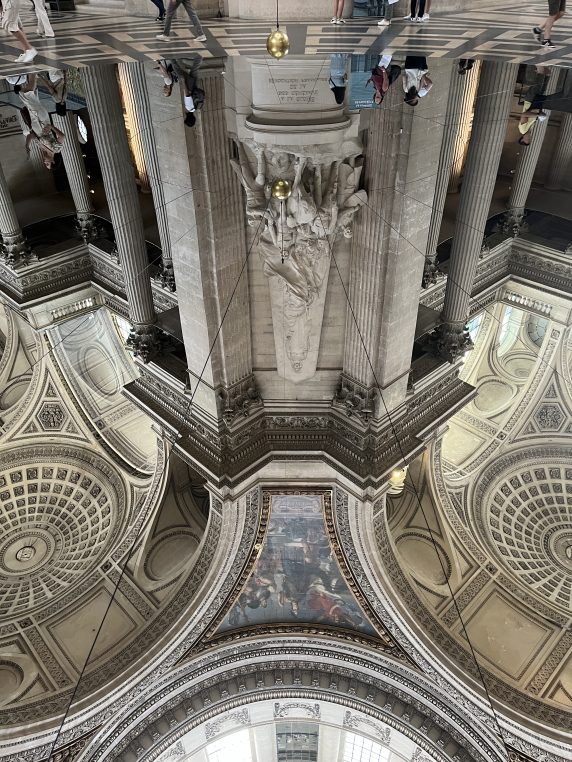 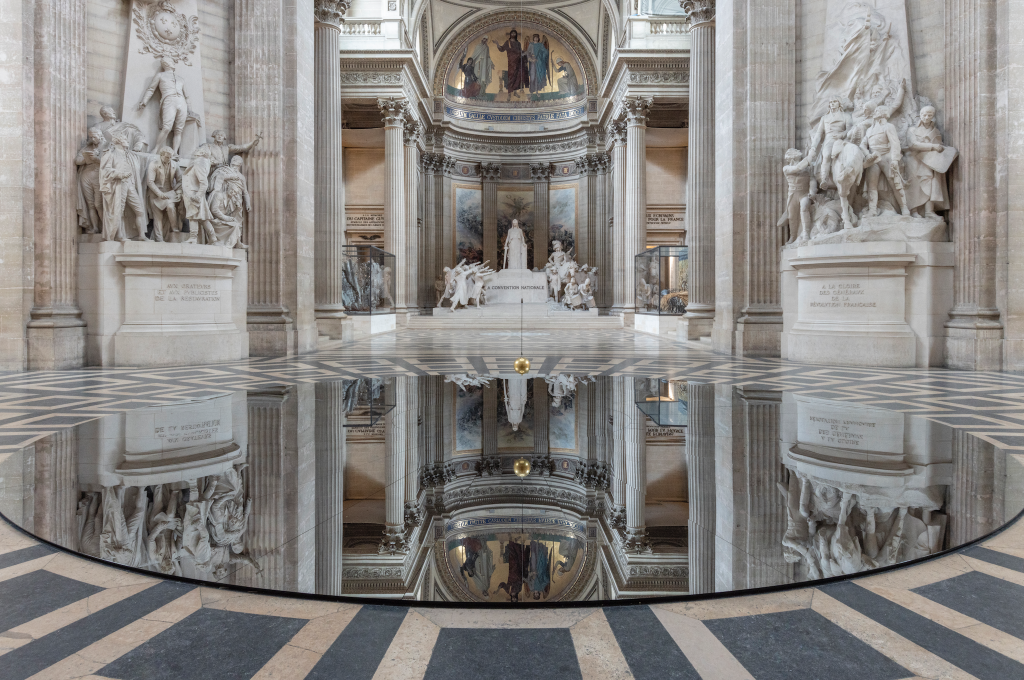 Like most Parisians, I never go to the Pantheon, but Ann Veronica Janssens‘s project (until October 30) enticed me to return at a time, in mid August, when Paris’ museums are folding all their exhibitions. And it was a great experience. Three thousand visitors enter the Pantheon every day in the summer and to see children running around, young couples making selfies in front of François Léon Sicard‘s National Convention, or Anselm Kiefer‘s six large installations was uplifting. The light is beautiful in this resting place of the great figures of France. More recently, Simone Veil and Joséphine Baker were pantheonized, two very unusual women who attracted more light to the monument. Voltaire, Rousseau, Victor Hugo, Louis Braille, Jean Moulin are all revered in this former church of Sainte Geneviève, which has become the symbol of the Republic. It was designed by the architect Jacques Germain Soufflot. 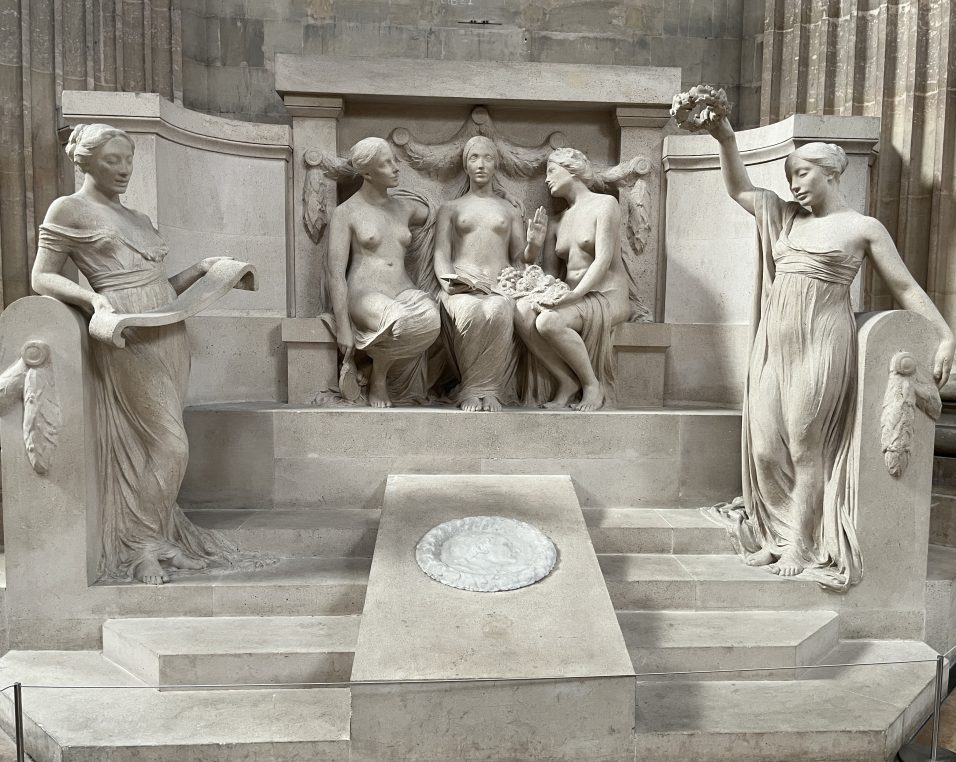 The size of the building, originally a church, was motivated by Louis XV th gratitude for recovering from a grave illness during the war of Austrian Succession in 1744. Clovis, the first King of France, had made the church of Sainte Geneviève a symbol of the alliance of the French monarchy with the Church. The location, at the heart of the Latin quarter, between two powerful Jansenist forts, Saint Médard and Saint-Etienne-du-Mont, was also very political. Soufflot was an innovative architect who had studied in Italy and he chose heavy pillars and massive architecture to rival the magnificence of Saint Peter’s basilica in Rome and Saint Paul’s Church in London. 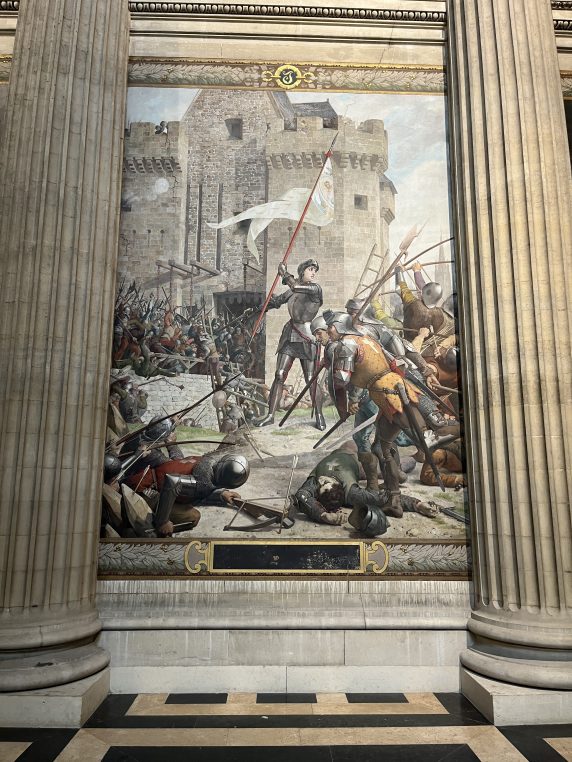 While the Pantheon was decreed a National Basilica in 1851, most paintings and groups of sculptures date from 1874, after the Director of Beaux Arts, Philippe de Chennevières, embarked upon an ambitious decorative theme designed to glorify the current regime. Sainte Geneviève, Clovis, Charlemagne, Saint Louis, Joan of Arc, are celebrated in large paintings by Hébert, Humbert, Lenepveu, Lévy, and multiple sculptures. With the new Republic, the monument was definitely desecularised and the day after Victor Hugo died on May 22, 1885, the government ordered that he Pantheon be restored to its former “republican” role. A year later the centenary of the French Revolution was celebrated with the inhumation of many heroes. 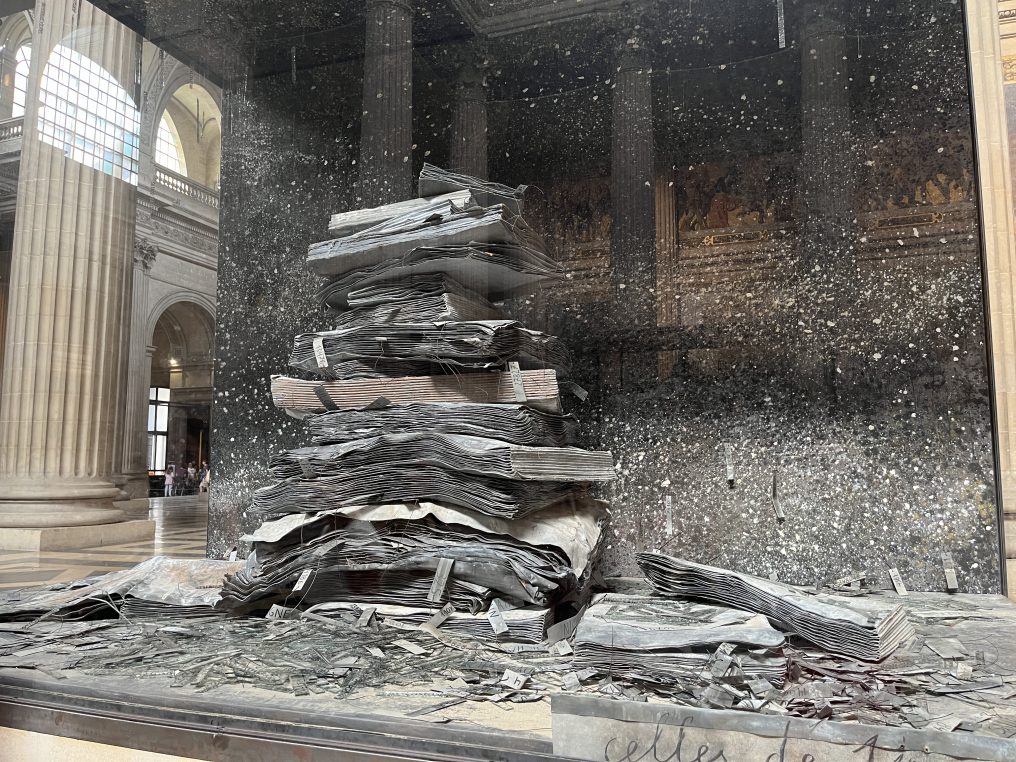 Belgian artist Ann Veronica Janssens’ installation, a large circular mirror which reflects the whole ceiling, is very powerful. It gives life to this intimidating monument and Foucault‘s 67 m long gold pendulum moves back and forth on the surface. It was first installed there in 1851, until a modern replica was put in more recently. Anselm Kiefer’s works staged on November 11, 2020, add a contemporary note to the mausoleum and were completed at the time by Pascal Dusapin‘s musical composition which can be heard as sung a cappella by the Accentus choir. 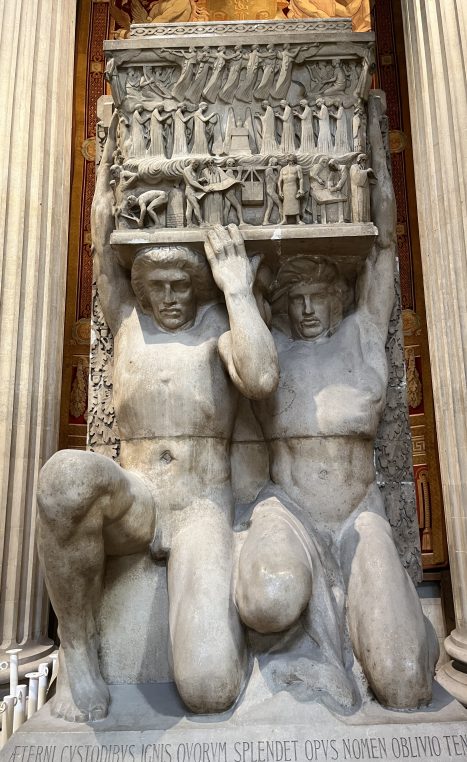 Paul Landowski, “To the Memory of artist whose name has been lost”, 1913

Centre de monuments nationaux, which manages the Pantheon, has been very active in the recent years for the modernization of the artwork and François Mitterrand entering alone the Pantheon in May 1981, certainly gave an impulse to the building’s image. There are 81 people buried in the crypts which I did not visit because I am too claustrophobic but you can spend a whole afternoon there and even climb to the “panorama” terrace. It is a great way to understand the history of France and now that Joan of Arc has become the heroine of the transgender cause, the Pantheon might even become more trendy.

Pantheon is on place du Panthéon near the Luxembourg gardens and the Sorbonne. It is open everyday from 10 am to 6 pm and it is better to reserve, especially if you want to climb on top.

3 Comments on “The Pantheon has become the “it” place!”