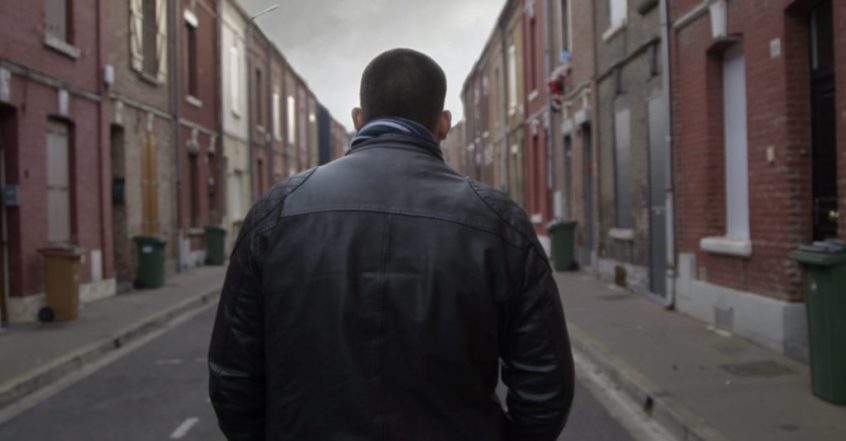 Bastien is filmed reading the script of his own life

“La Cravate“, the latest film by artists Etienne Chaillou and Mathias Théry, is the story of the 2017 Presidential campaign of extreme right candidate, Marine Le Pen, as lived by an obscure 20 year old chubby boy from Amiens. Bastien grew up in the north of France in a perfectly normal middle class family. But he did not fit into his school and became violent. He is filmed for 97 mins trying to invent a new way of life within the Front National movement. He is eager to befriend people from different milieux (his girlfriend was extreme left) and he is both very touching and terrifying… La cravate, the tie, is what he wears when he goes to Paris to meet with the higher party members.

At the headquarters of the Front National in Amiens

The first images show him being interviewed by the two directors, while reading the script of the film after it is edited. Does he agree on every word he said, including the violent scenes? Yes he does. He is candid, bright and yet completely unsophisticated. Lost.  All along the film, one feels some affection for this fat guy who tries to find his place in society, has good ideas for the campaign, but for lack of education or lack of judgement, never quite makes it to the top of the local party. The positive side is that he is utterly disgusted by politics in general as a mean to success.

Celebrating in blue with his young boss who went to business school!

Chaillou and Théry, specialized in video and animated movies at Ecole des Arts Décoratifs. They used a brilliant filming technique to show how easy it is to fall into the wrong side of politics when you are an earnest boy, disillusioned by your milieu. The boy has a strong presence on screen.

I hate all sorts of political films but this one moved me and I ended up being riveted by the candidness of Bastien in the interviews.  Unfortunately the film is only in French and will not be distributed abroad but I encourage all French speakers to go and see it. “La Cravate” comes out on Wednesday 5th February.