The Musée de l’Elysée, a small house with a big aura.

The Musée de l’Elysée in Lausanne is turning thirty, and so has its brand new director, Tatyana Franck, who took over last week  from Sam Stourdzé, now the director of the Rencontres Internationales de photographie d’Arles.

Famous around the world for its touring photo exhibitions, the Musée de L’Elysée is located in a beautiful 18 th century house overlooking Lake Léman. It is a must visit, as much as the Fondation de l’Hermitage on top of the hill. 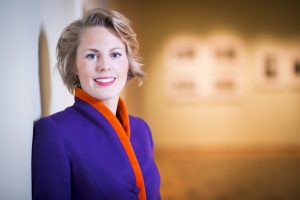 Tatyana Franck, a free lance curator of photography and sculpture shows, was born in a family of collectors and her aunt, famous photographer Martine Franck, was also Madame Henri Cartier-Bresson. Is it an amazing coincidence or a sign of destiny ? that she started the job while William Eggleston’s exhibition « From black and white to color » was hanging in the pretty pale green galleries. Born in Memphis, Eggleston professed when he was young “I could not do better than perfect fakes of Cartier Bresson”: he met him once in Arles in 2003. Agnès Sire (from the Cartier Bresson foundation) is one of the curators of the show with Daniel Girardin. 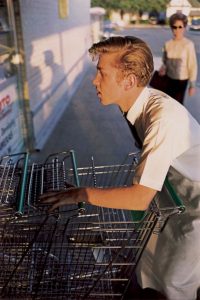 A picture by Eggleston in Los Alamos

A video, « A Journey with Bill Eggleston » shows some of the landscapes and red and green cars that influenced the photographer of the South. His very deep voice is especially moving, as is his son, who looks just like him at the same age. A specialist of dye-transfer prints since 1972, he exhibited his first color photographs at MoMA in 1976. It is fun and nostalgic to watch his assistant print « old style » in the lab. The photographer was asked to shoot Elvis Presley’s house in Graceland in 1983, and he writes about his shooting “foreign landscapes” in 1965: ” what was new then were supermarkets and that’s why I photographed them” attaching his camera to the banalities of life. A black girl in a skirt, a handsome boy pushing a cart in Los Alamos, daily life is the focus of his eye.

In the very chic attic of the Museum, « Photobooks » is an exhibition of some of the 17 000 books of photos owned by l’Elysée. A large table which acts as a huge flat screen, shows the digitalized books and when you catch one with your finger, the book opens and shows its treasures. It is a new device created in collaboration with EPFL, Ecole Polytechnique fédérale de Lausanne, and it is quite enchanting, especially for children who are invited to come and play in this room.

In the ground floor of the house, are shown the eight mid career photographers, selected for the Prix Elysée. Their projects are all reproduced in a luxurious catalog and the winner will be announced in June. 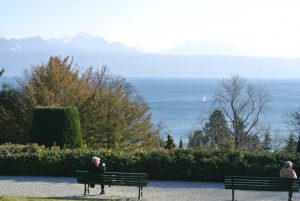 The view over Lake Léman is spectacular.

You have five more years to enjoy the location, since next October, the name of the architecture firm in charge of the future Photography museum to be built near the train station and united with Musée des Beaux Arts, will be announced. Among the 21 contestants, are Jean Nouvel and Dominique Perrault of France, and Sanaa and Shigeru Ban of Japan.

“What a beautiful way to start a new job with such a huge project for the city of Lausanne”,  exclaimed Tatyana Franck over a delicious dinner that evening at a neighbor’s house. We all felt happy and proud for her !