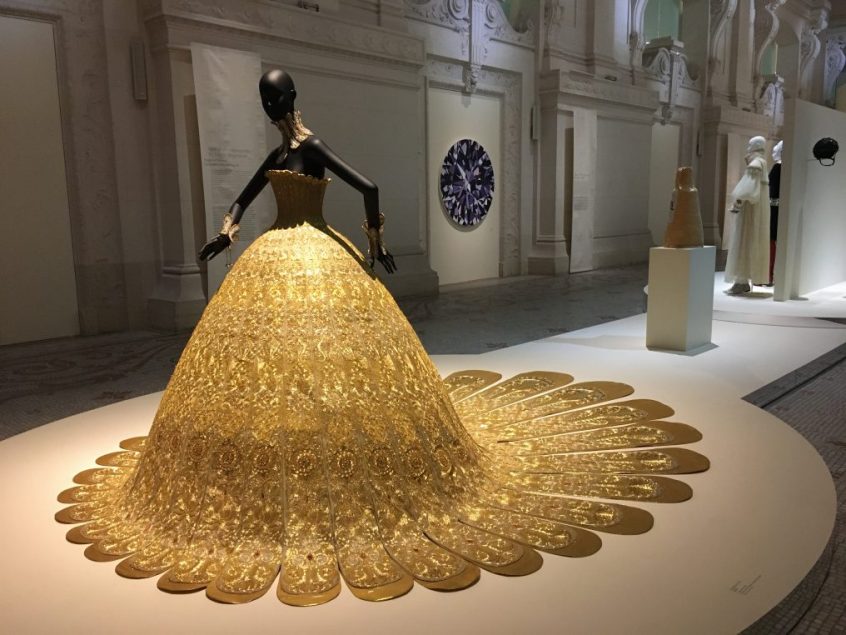 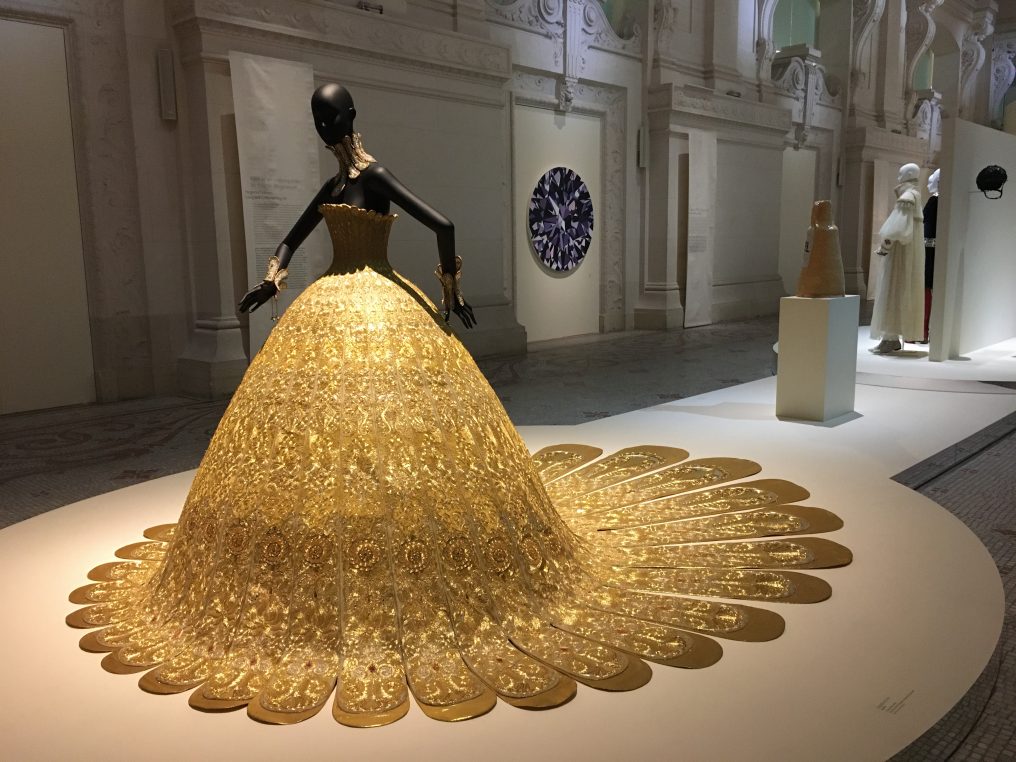 If you are curious of the new artistic scene, go to Magasins Généraux in Pantin to discover “Un plus grand lac” (a bigger lake) an exhibition of students’ works from Ecole des Beaux Arts and Arts Décoratifs: Elisa Florimond, Victoire Gonzalvez, Lauren Januhowski, César Ropponen Brunel, all have interesting works to show under the excellent curatorship of Simon Grainville. Do not expect an exhibition on luxury goods at MAD, Musée des Arts Décoratifs, but go for the pleasure of seeing the spectacular “Magnificent Gold” dress by Guo Pei, an old Hispano Suiza H6B 209, the 1900 salon designed by George Hoentschel for the Exposition Universelle and the extraordinary “Fallen Tree” bench by Benjamin Graindorge for Ymer&Malta. And go to Mahj, Museum of Jewish art and history, to discover the part played by  Pierre Dac, a famous French Jewish humorist, during the war. 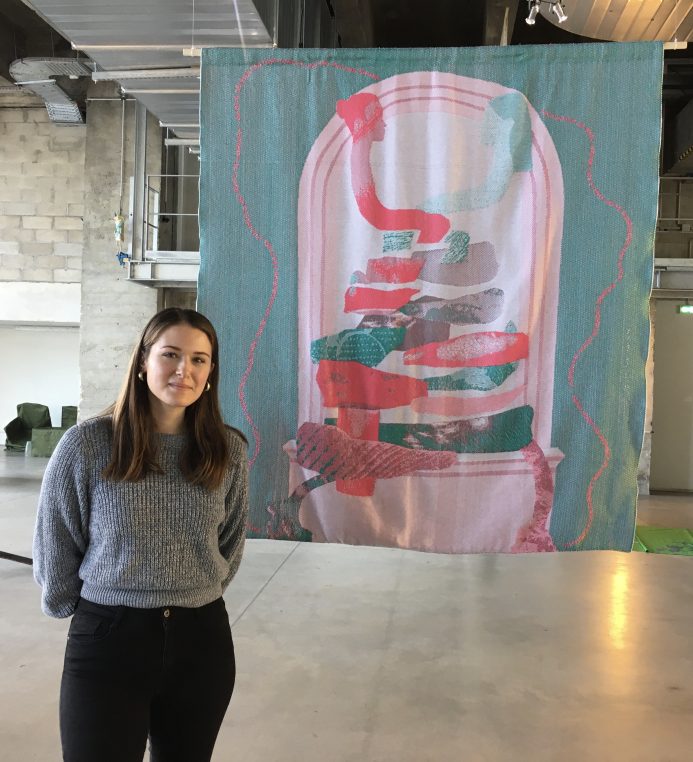 Lauren Januhowski from Houston, with her embroideries and patchworks at Magasins Généraux in Pantin

Magasins généraux in Pantin is the name of a building set on the canal where the creative agency, BETC, welcomes young artists in their ground floor gallery. You can visit every afternoon until the 25 th of October. Fifteen students exhibit their installations and videos, in the large concrete space. While they all are very intellectual for visual artists, some of them have creative ideas and their works are attractive. Elisa Florimond, who studies at the Beaux Arts, already exhibited last year at the Fort of Sainte Marine, in Brittany. She tries to catch ceramic objects in a large net. 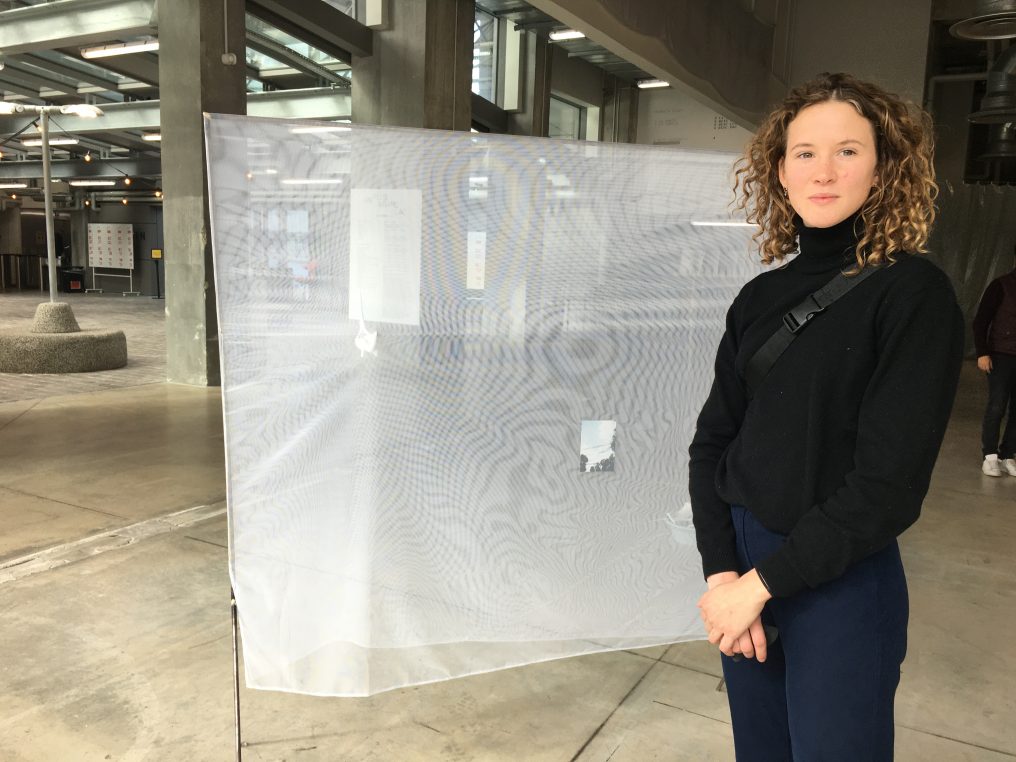 Lauren Januhowski an American artist from Houston exhibits interesting embroidered patchworks on the theme of Women in Society. Victoire Gonzalvez also works on feminist issues and creates synthetic “hymens”. Her video behind a closed curtain shot at Cinecitta, studies different ways of piercing eyes. The student curator from the Sorbonne, explained most of the works with great authority and I bet that his name, Simon Grainville, will soon be on major shows in contemporary art. 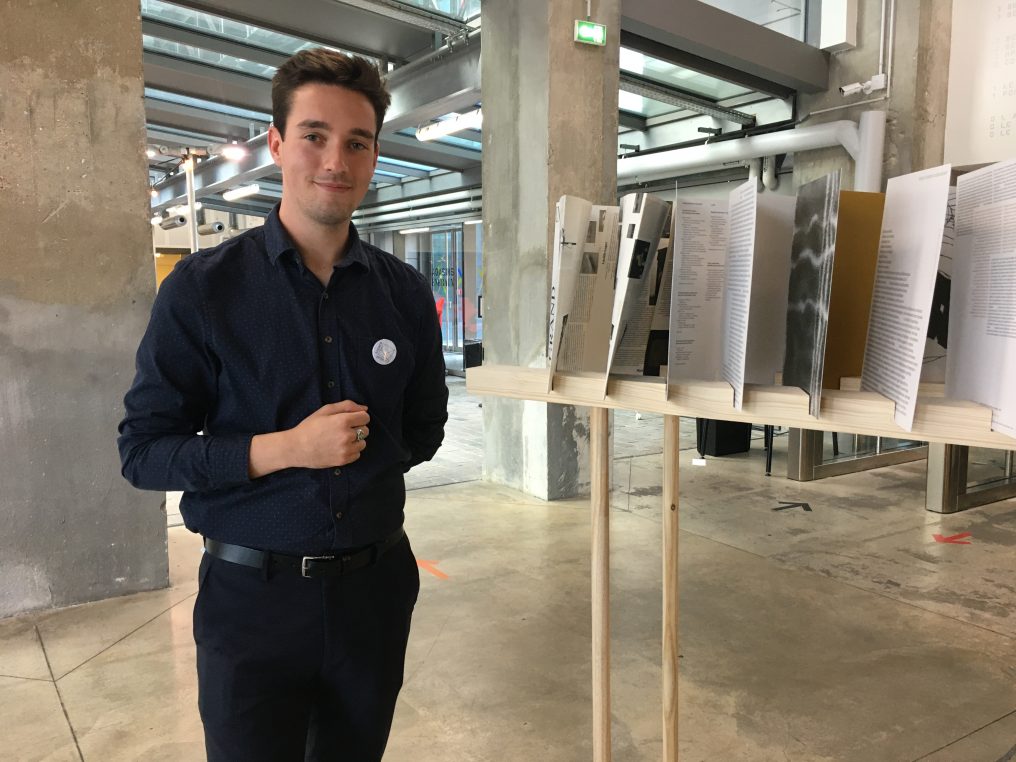 Simon Grainville, in front of the catalog, is a graduate from the Sorbonne and the curator of the show

Now that theaters and operas are going to close down again because of the curfew, let’s concentrate on exhibitions and movies. The great news is that “Call my agent” (“Dix pour cent” in France) is resuming on television on the 21 st. It will be the occasion to organize mini dinner parties and have everyone stay overnight…

I truly enjoyed watching “Emily in Paris” on Netflix. Of course without the spectacular costumes designed by Patricia Field, who had done “The Devil wears Prada” and “Sex and the City) and worn by Lily Collins and Ashley Park, the film would have been less fun. But I loved the dialogues singling out all the differences between the French and the Americans, quoted as the “Faux amis” in the script and the permanent reference to French men flirtatious habits. 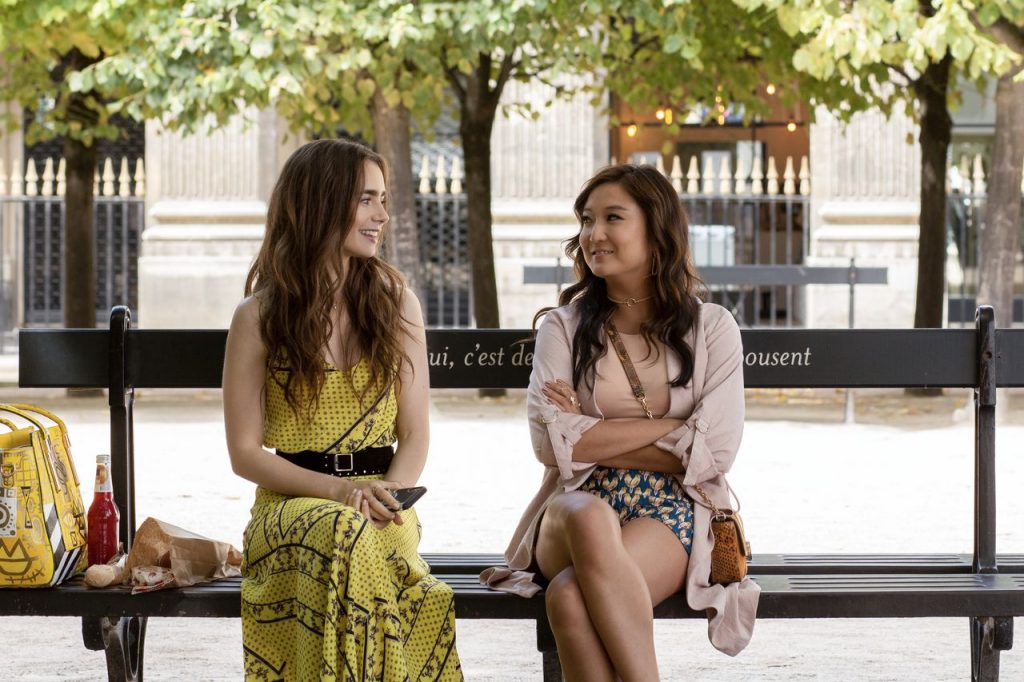 Philippine Leroy Beaulieu is excellent as the defensive tough advertising agency executive and Lucas Bravo is irresistible as the French lover/restaurateur. All the French actors speak good enough English and Paris has not looked so spectacular since “Midnight in Paris”. The plot of a young marketing executive coming to Paris from Chicago is a little thin, but it keeps getting better all along and there are many laughs.

At Musée des Arts Décoratifs, I was happy to discover the 1900 wood paneled room with dozens of ceramics and statues presented in windows from the Exposition Universelle. The wood work of this “Salon du Bois”  is exceptional with its Algerian sycamore. Nature is exalted as the epitome of beauty in the large painting “L’île heureuse” by Albert Besnard. 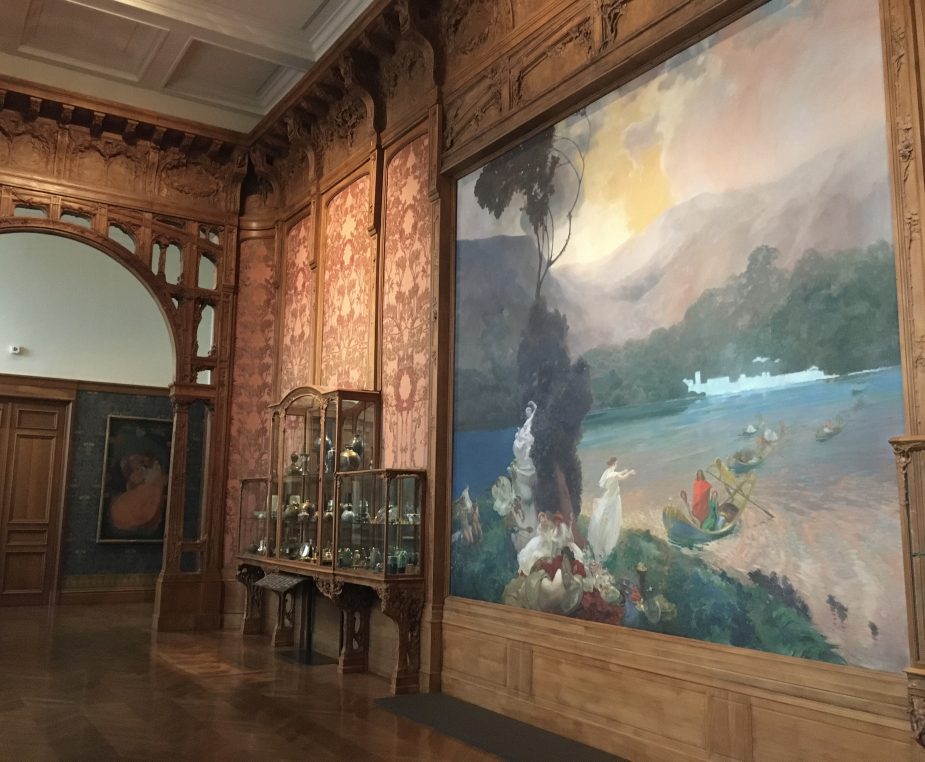 The 1900 salon by George Hoentschel at MAD with Albert Besnard’s large fresco of “L’île heureuse”.

But I was disconcerted and I have to admit disappointed by the mix of genres in this “Luxes” theme. A beautiful pair of pyramid vases form the Netherlands contained such awful artificial tulips that you could not see them properly. Why present a pair of beautiful Mali peul earrings next to a Syrian bracelet with precious stones and an Egyptian spoon for offerings from the 14 th to 12 th century bc? All these objects are interesting but the show looks like the museum just picked a few items from their precious reserves and exhibited them with no lead. I love Ymer&Malta creative designers but why show a few Art Deco dresses with  a contemporary bench by Simon Grainville? The aesthetical argument is not enough. 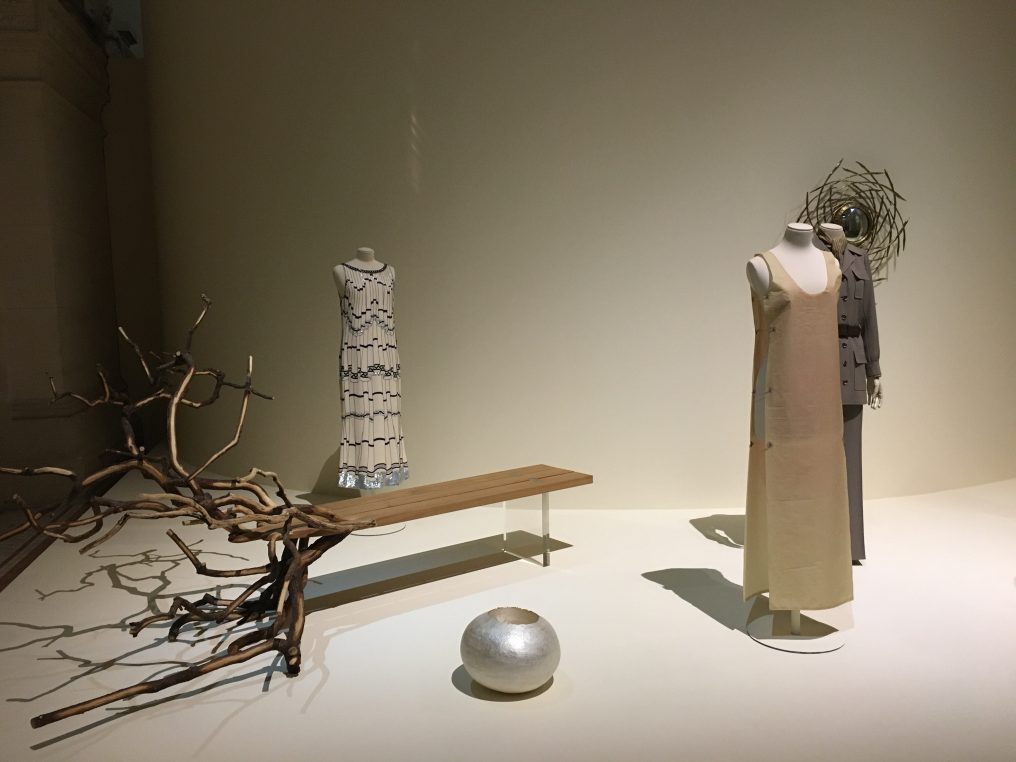 Simon Grainville, “Fallen Tree” bench with dresses from the collections

At mahJ, one discovers that Pierre Dac (1893-1975), one of the most famous radio and press humorists of pre and post WW2, was the son of a Jewish butcher. Co curated by journalist Jacques Pessis who is his executor, the show is interesting for all the documents that testify of his role in London with de Gaulle when he addressed the French through the BBC. This master of the absurd, born André Isaac, played with words in the most eccentric way and after fighting in WW1, he produced the first comic radio shows in the 1930’s, published the satyrical weekly newspaper l’Os à Moelle, and l’Os Libre after the war. there are many photographs of him with contemporary humorists and extraordinary texts which can also be found in the catalog. 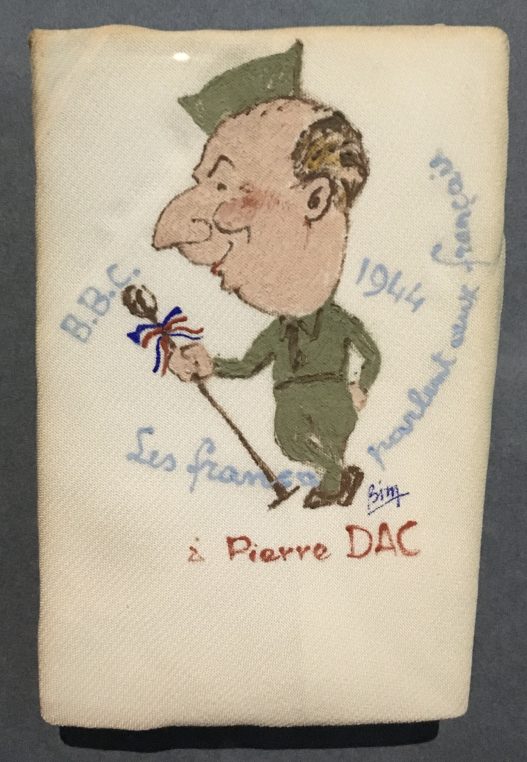 Make sure to book in museums.