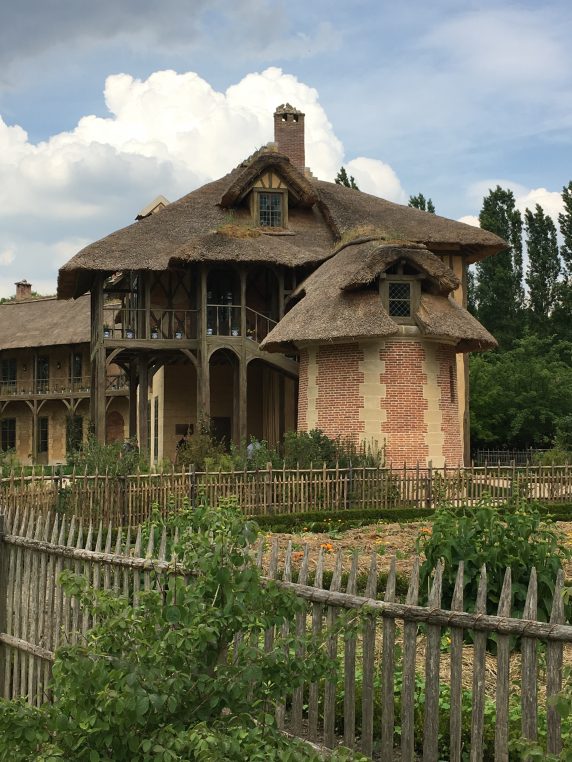 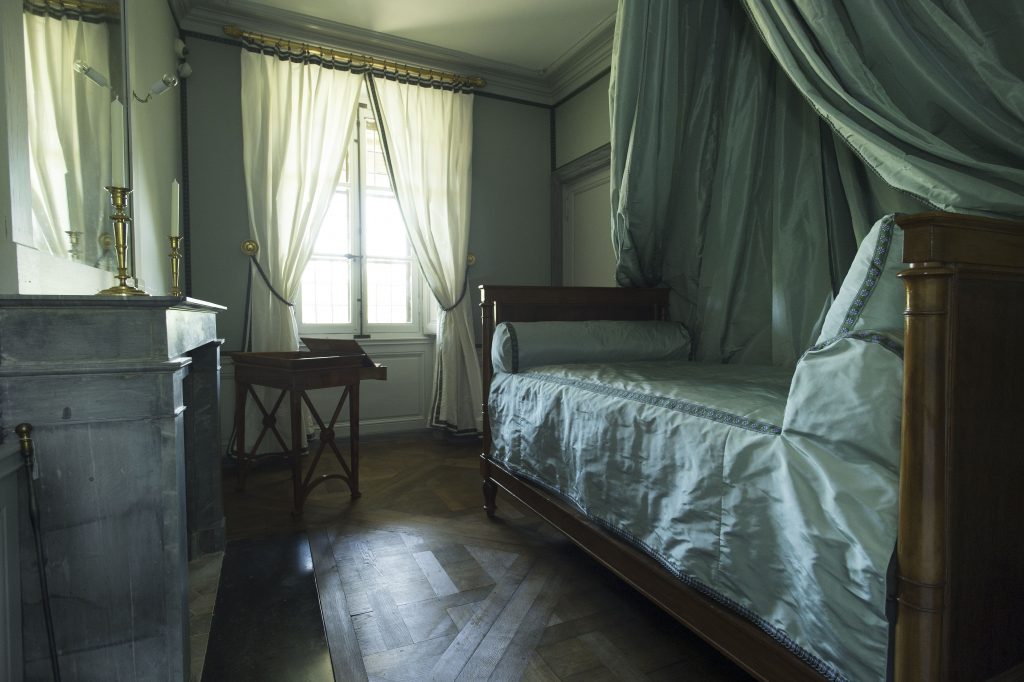 The Queen’s bedroom at the Hameau

There is not a week without a new event at Versailles and the opening of the Queen’s hamlet, newly restored is major news. At the same time, a new prize for historical books is created and given to a biography of Camille and Lucile Desmoulins by Hervé Leuwers (Fayard). From Revolution to restorations, the old palace is constantly on the move. In September it will be hosting dinners and receptions every night fo the Ryder Cup. Golf National, where the major golf tournament is taking place, has a private gate to the Park of Versailles on hole n°14! and all the players will be staying at the Trianon Palace hotel. 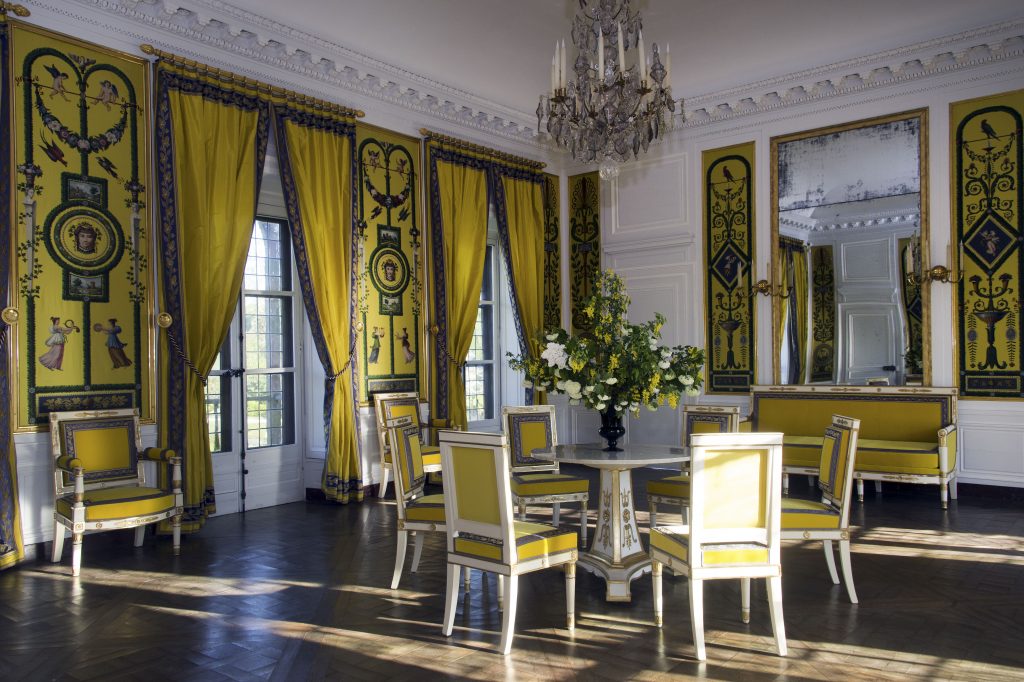 On my last Eurostar trip from London, I sat with a group of Indians from Kerala who were spending two days in Paris. Their first destination was the Eiffel Tower, the second was Versailles. When I raised my eyebrows at the huge crowds that clutter both sites, the guide said, we have a booking, we have a booking… Versailles has become a nightmare on most days and this is why, its attractions are forever expanding.

A walk in the Grand Trianon and all the way to the Hameau was a lovely experience especially since syringas were perfuming every path and the warm temperature had attracted many young lovers. 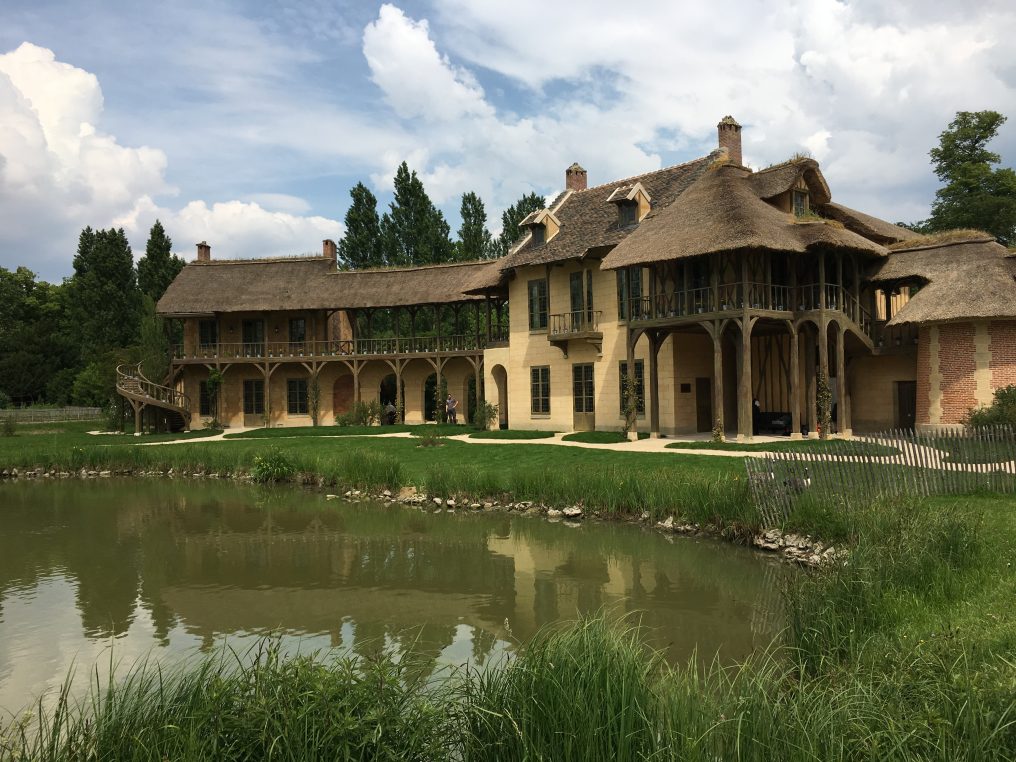 The renovated “Hameau de la Reine”, the little hamlet where Marie Antoinette enjoyed some privacy and could play in her “English” garden is going to be new center of attraction this summer with its pond and immaculate furniture and silks. It lies near the Grand Trianon and  Petit Trianon which are already attracting the smart visitors. 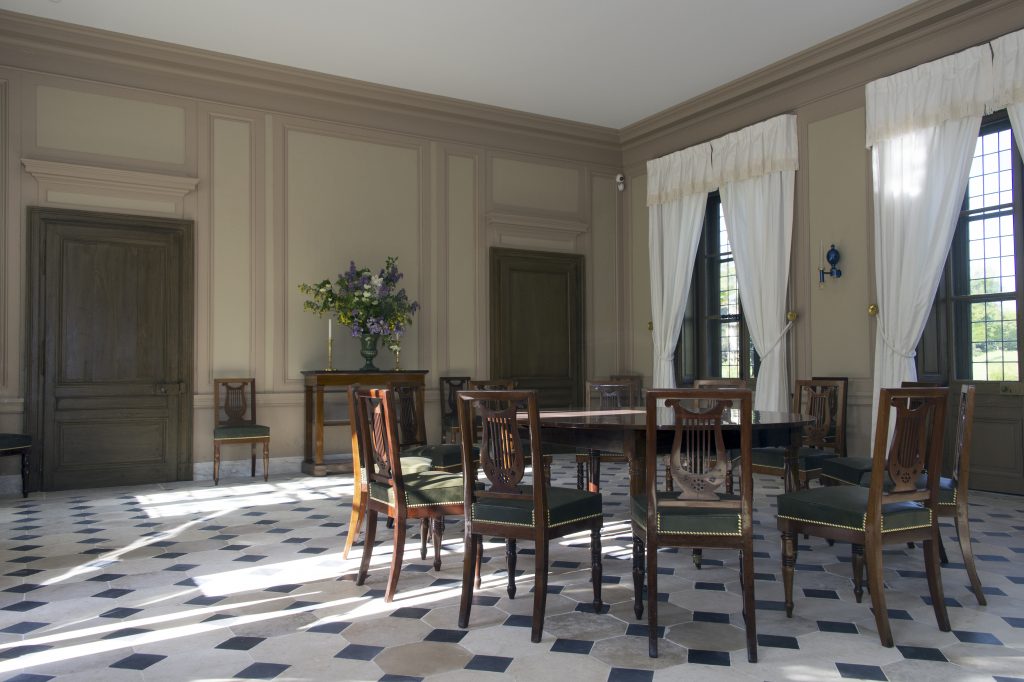 One reaches them by car directly, with the little train which you can jump on near the castle or after a two kilometer walk along the canals. When I arrived at the Trianon, and asked my way to the Hameau, the security guard sait “vous allez à la campagne? c’est tout droit” (you’re going to the country? straight on…). this seemed to be the new code among habitués… 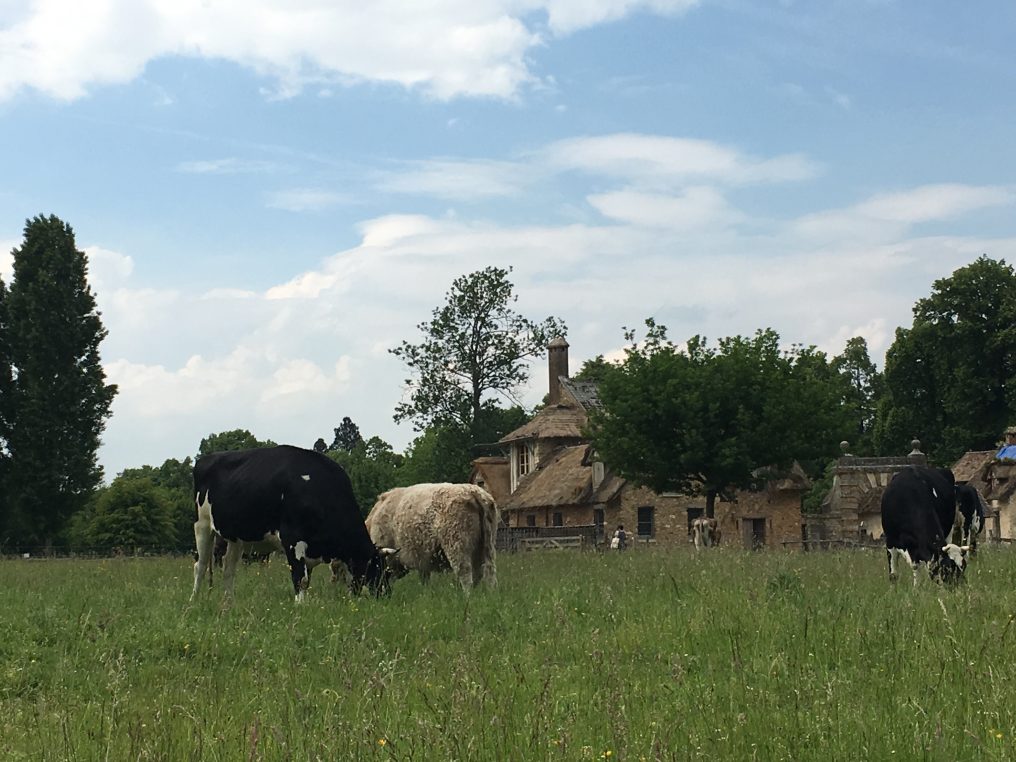 Cows are still grazing nearby like in Marie Antoinette’s times

And it is truly a delightful walk with a few cows on the left, a nice English garden next to the main house and the laiterie (milk house), the gardners’ house, the mill, and the Temple of love not very far. The whole complex is a delight and visitors are different. There were many American college kids, a few families, delighted walkers. For it is a little effort to get there and you can only visit the house if you have booked previously a private “conference tour”. 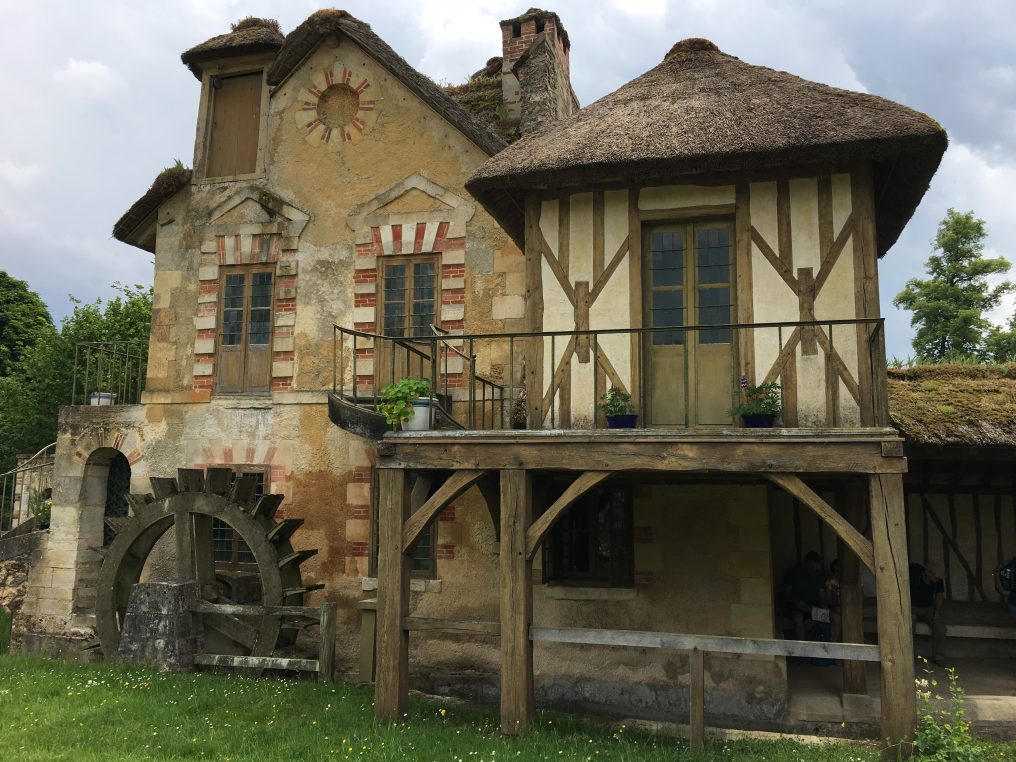 I am not sure it is worth bothering since the furniture is all from Napoléons’s second wife, Marie Louise and not Louis XVI th as expected for Marie Antoinette. The poetry of the hamlet lies in the surroundings, the lovely roses, the superb “elephant foot”  Plane tree planted in 1798, the yellow irises on the pond, the English river surrounding the island of love,  and in imagining the queen playing around. 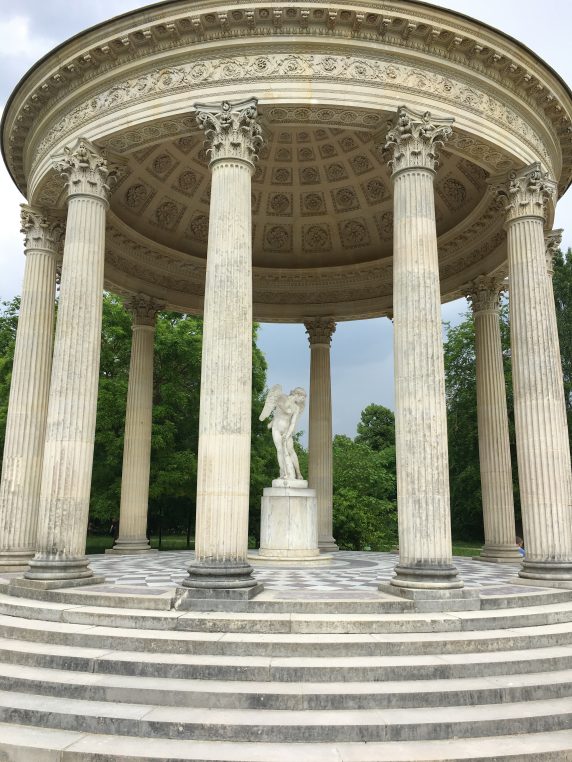 There are ballets and operas in the Royal Opera house and Philippe Jaroussky will be singing Orpheo by Gluck on 8th  and 10th of June.  After having heard him at Théâtre des Champs Elysées, I can testify he is unique! 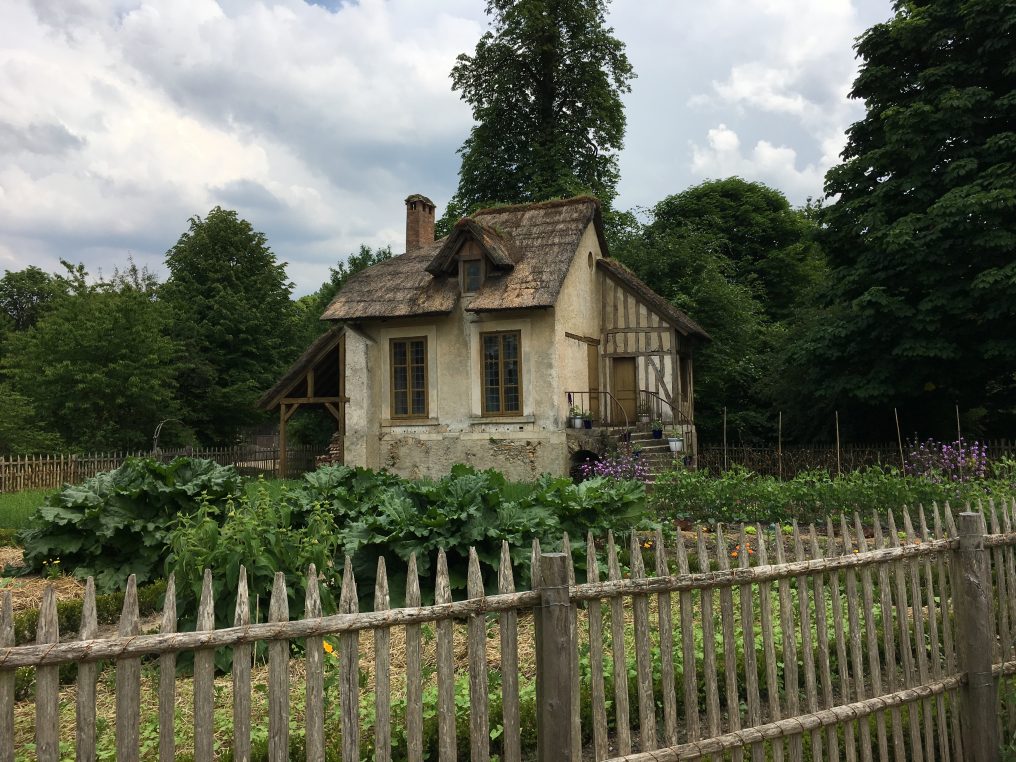 The gardner’s house with the vegetable garden

There are special days when the Bosquets in the park are animated with music and the fountains are working. Check the calendar here. And you can take a 1H 30 tour for 10 € of the Potager of the Queen  with gardner Aain Baraton on Tuesday  12 June (10h-11h30) : Les fraises  and on Friday 29 June (10h-11h30) : L’ananas

2 Comments on “Versailles is extending on Marie Antoinette’s territory”