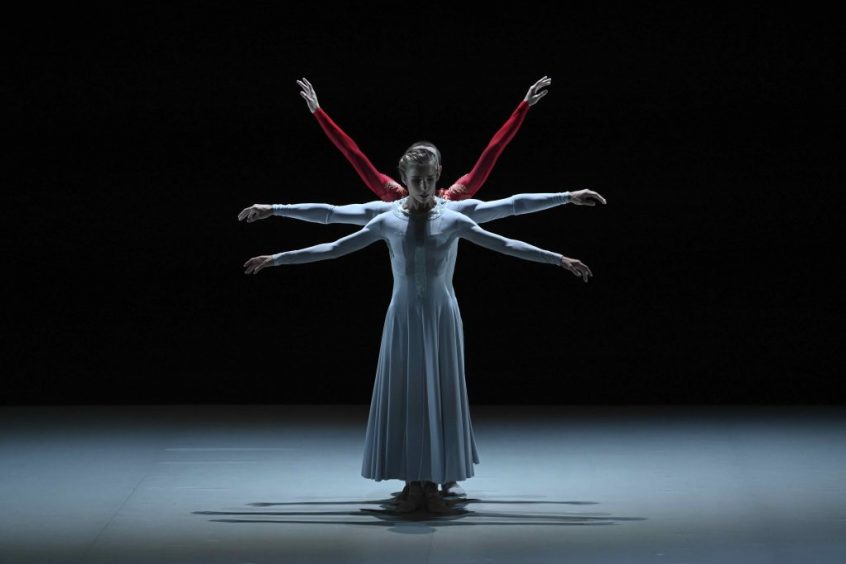 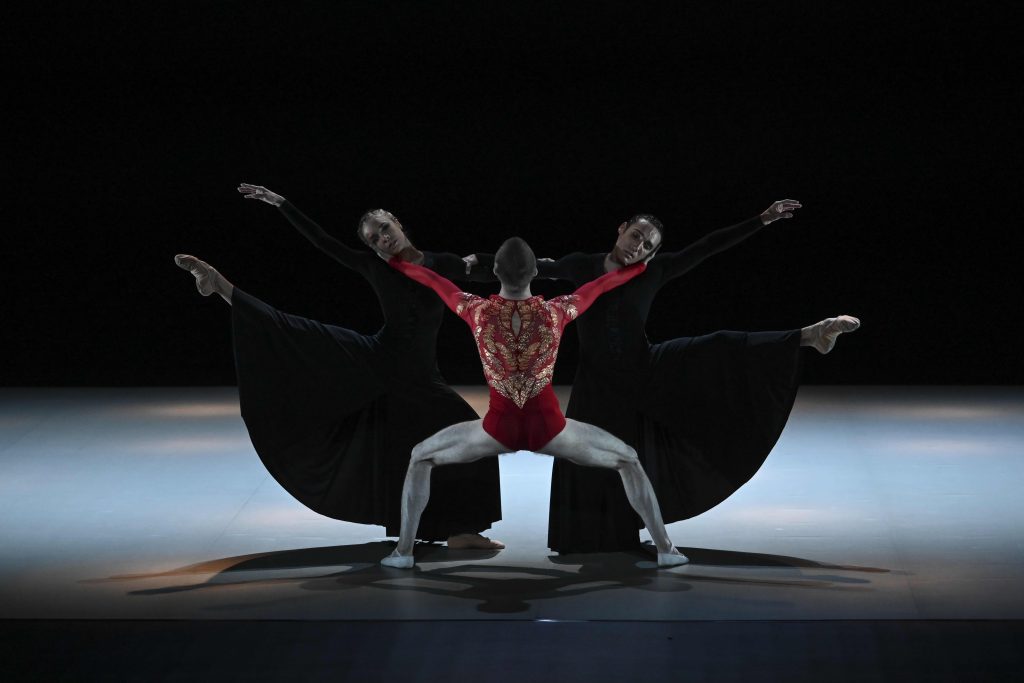 So much is happening in Paris at the moment that I will be very concise even though all events are important. I enjoyed very much the Malandain ballet at Chaillot, the Stravinski program with a captivating “Firebird” by Thierry Malandain and  “the Rite of Spring” choreographed by the young Martin Harriague (until November 12). The exhibition of “I Camuccini” father and son, Roman painters, at galerie Eric Coatalem and at Maurizio Nobile (until December 3), the Renaissance “Antica Farmacia” pots from Venice and Nevers at Aveline (until December 4) and the “Cartier and Islamic arts” show at Musée des Arts Décoratifs (until February 20). At Carrousel du Louvre, the salon Fine Arts Paris is back with 55 top galleries and a decor signed by Jacques Garcia (until November 11). And please make sure NOT to go to dinner at l’Epi d’Or, on rue Jean-Jacques Rousseau, the new Jean François Piège address. It is expensive and bad (except for the French fries) and mostly the waitress is so rude that you want to leave before ordering… which we unfortunately did not do. 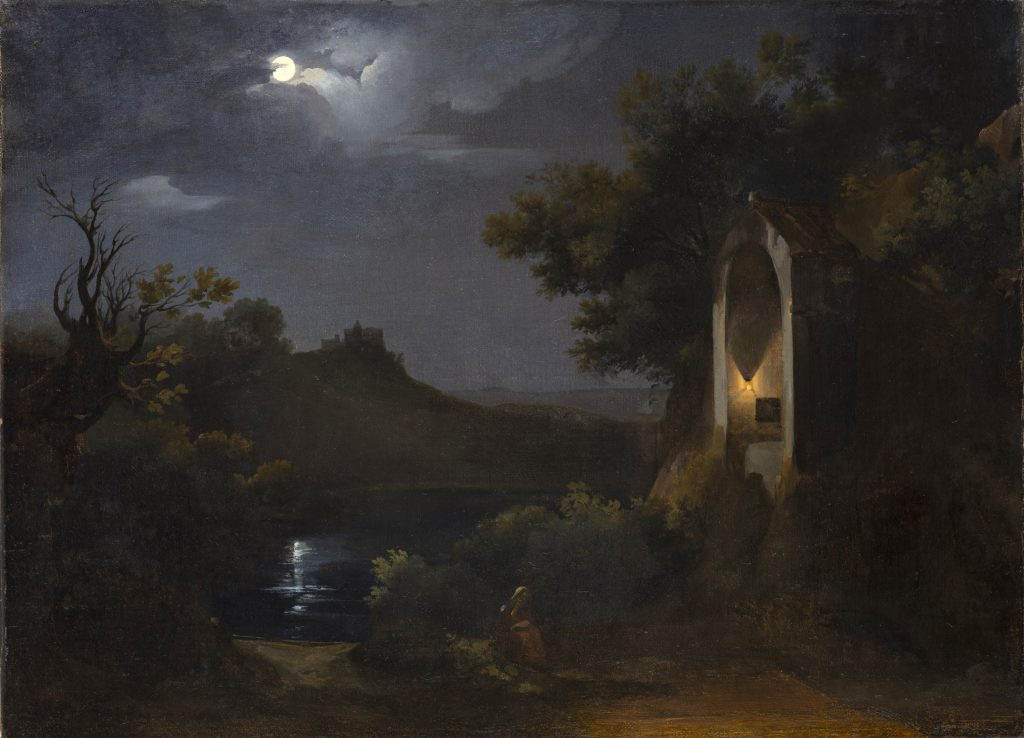 The presentation of fifty paintings by Vincenzo Camuccini (1771-1844) and his son Giovanni Battista Camuccini at galerie Coatalem was very pretty. The father Vincenzo is considered as the leader of Neoclassicism in Italy and is sometimes called the “David of Rome”,  while his son, painted charming landscapes with a beautiful light and stopped at 31 when his father died and he suddenly became immensely rich. There will be a painting by Giovanni Battista at the Custodia Foundation next December 3 in their major exhibition of  “Painting in the outside”, which was already shown in Washington last year. Francesca Antonacci, Damiano Lapiccirella and Maurizio Nobile have been preparing this show for many years, patiently collecting the works from the descendants of the Camuccini. (Until December 3, at Maurizio Nobile, 15, rue Chapon). 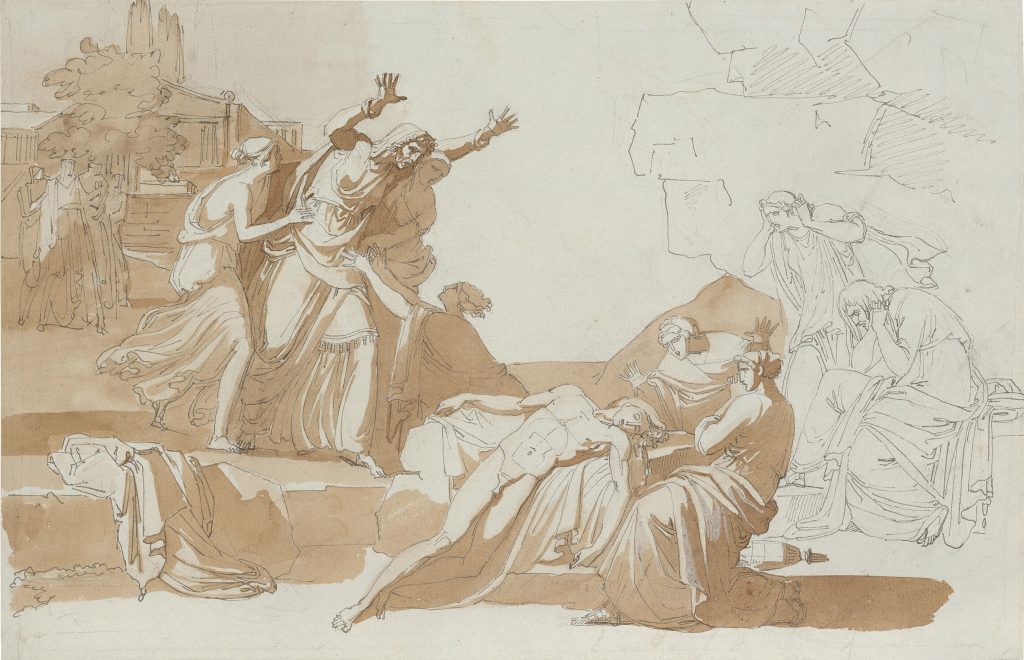 In the meantime, at Carrousel du Louvre, the salon Fine Arts Paris is resuming after two years and it was lovely to see Alan Salz back from New York at Galerie Didier Aaron. Hervé Aaron and Bruno Desmarest were showing an exceptional painting by Carle Van Loo, “Le voeu de Louis XIII” (Louis XIII th’s wish), while Guy Ladrière across the alley, had rare sculptures and the portrait of a man by Gian Lorenzo Bernini. Ditesheim and Maffei showed new drawings in color by Erik Desmazières and Prouté, wonderful ones by Jean Baptiste Sécheret and a charming print on wood of a young Bretonne by Carl Moser. I noticed a few paintings by Ernest-Ange Duez, whom I had never seen before at Galerie de Bayser and an extraordinary mise en scène at Talabardon & Gautier of a bust of Françoise de la Rochefoucauld ca 1880 surrounded by two glass windows by Eugène Grasset and Felix Gaudin. Also a very pleasant Paul-Claude-Michel Carpentier “A painter in his studio giving some advice to his young pupil”, 1825. 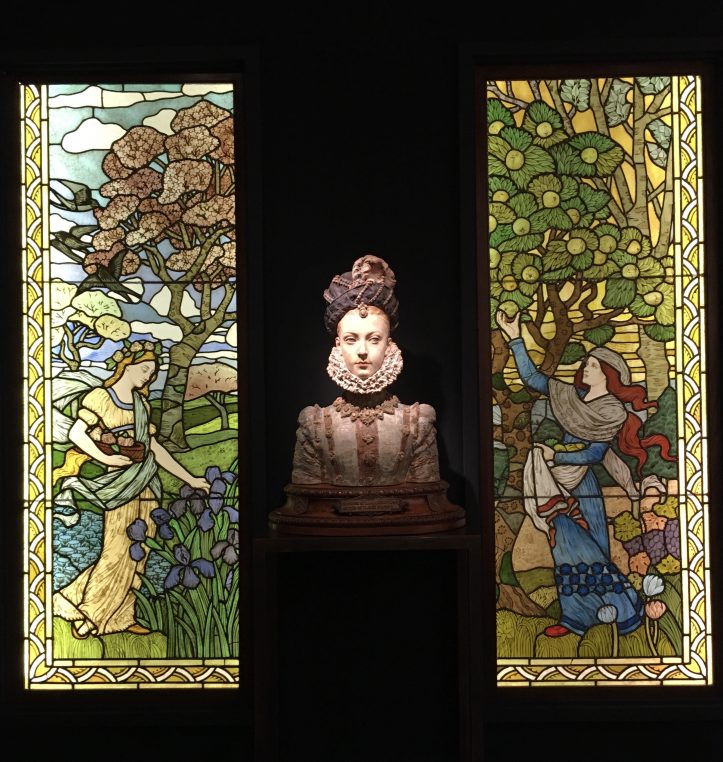 Christian Deydier had a delightful Chinese bronze oil lamp in the shape of a peacock and three lady polo players from the Tang Dynasty. Galerie Tanakaya had extraordinary Hiroshige prints which reminded me of the exhibition at Cernuschi last year, and Carolle Thibaut-Pomerantz showed a large panoramic vintage wallpaper of a quarry at a hunt in Compiègne drawn by Carle Vernet and printed by Jacquemart (1812-1815). There were lovely Italian and Dutch galleries and the atmosphere of the salon is very “feutrée”, confortable and luxurious, with thick carpeting and armchairs to rest in the alleys. (Fine Arts, Until November 11 at Carrousel du Louvre) 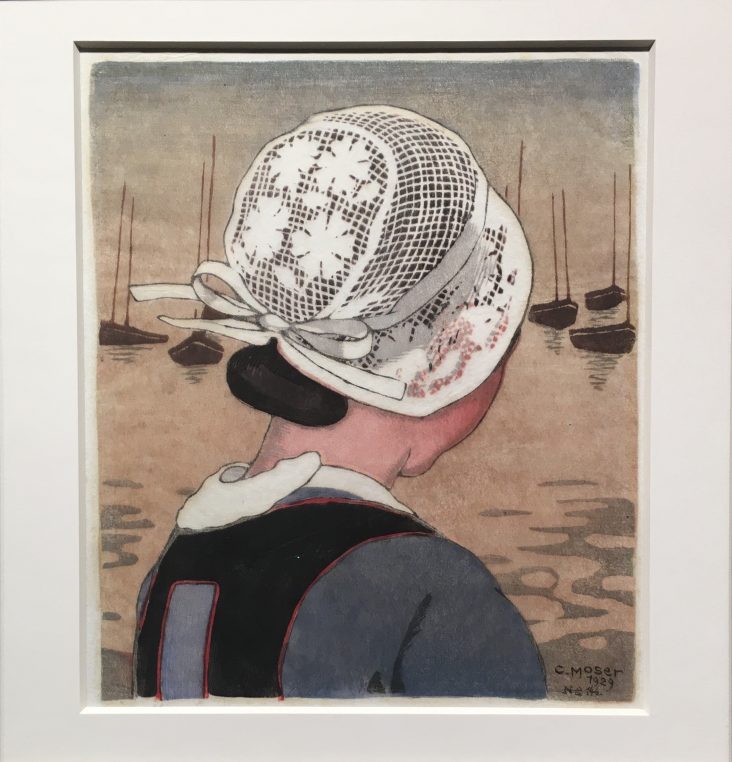 At Aveline on place Beauvau, another Franco-Italian event is taking place with Marella Rossi who devised a new exhibition with Camille Leprince and Justin Racannello, of pharmaceutical Renaissance and 17 th century (1540-1640) jars. The theme is very appropriate for our times! They come from Italy and France and have extraordinary decors. The curator of the show, Luke Syson from the Fitzwilliam Museum Cambridge describes them like this: “From Sicily to Lombardy, earthenware jars lined the shelves of Italian pharmacies. They contained elixirs and potions, sweetmeats and painters’ pigments. In judiciously sombre interiors, the unprecedentedly vivid and varied colors of Italian maiolica dazzled, glamorous, optimistic packaging for goods that needed careful looking after. 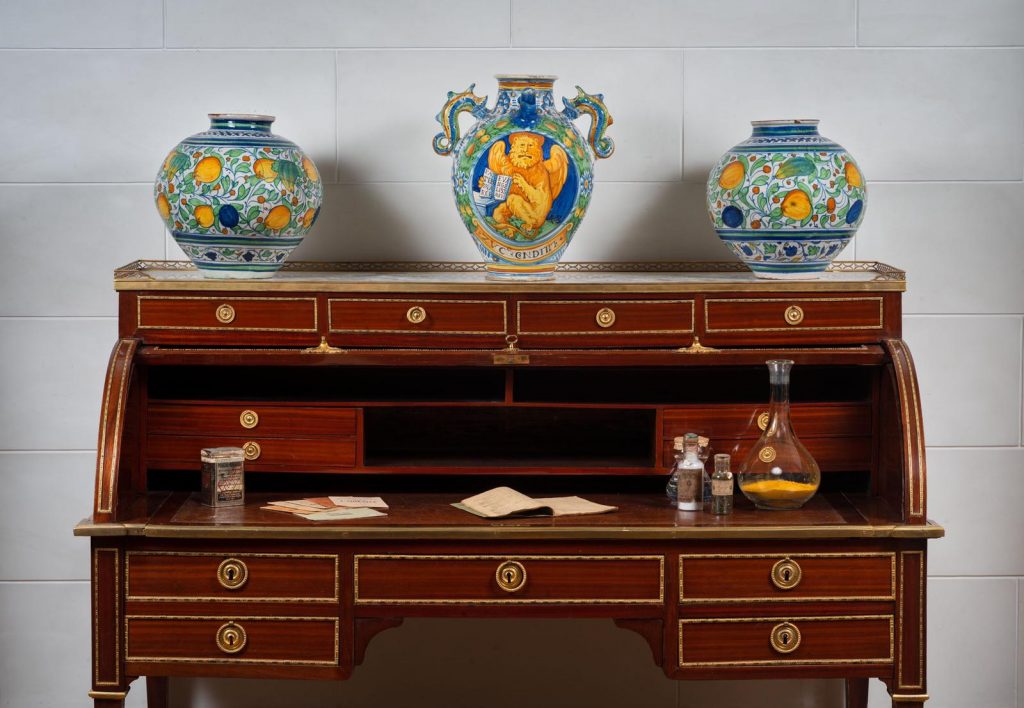 So their message was cumulative – of good health, prosperity, confidence in the effectiveness of the products they contained. But they were also painted with verve by potter-painters to make them individually precious. Single examples could be treated as vases. Or, with the series disassembled, pharmacy jars might become paired adornments for a mantelpiece.” It’s interesting to see the evolution from Italy to Nevers where the decors are enameled in blue and more sober. There are 101 pieces in this collection and when you go make sure to look at the details of the decors. (Aveline, place Beauvau until December 4)

Thierry Malandain, who enters the French Académie des Beaux Arts in December)  has accustomed us to beautiful ballet and his reinterpretation of Stravinski’s “Firebird” is tantalizing. I loved the costumes by Chilian designer Jorge Gallardo, and the confusion between men and women who often are dressed the same way, but was mostly moved by the “bird” who is the most incredible dancer but is never singularized since the company is a whole. The program also includes “The Rites of Spring” choreographed by Martin Harriague, a young dancer native from Bayonne. If you can, make sure to book tickets in Paris until 12 November or in Biarritz (22-26 December) or Reims on 21-23 May 2022. 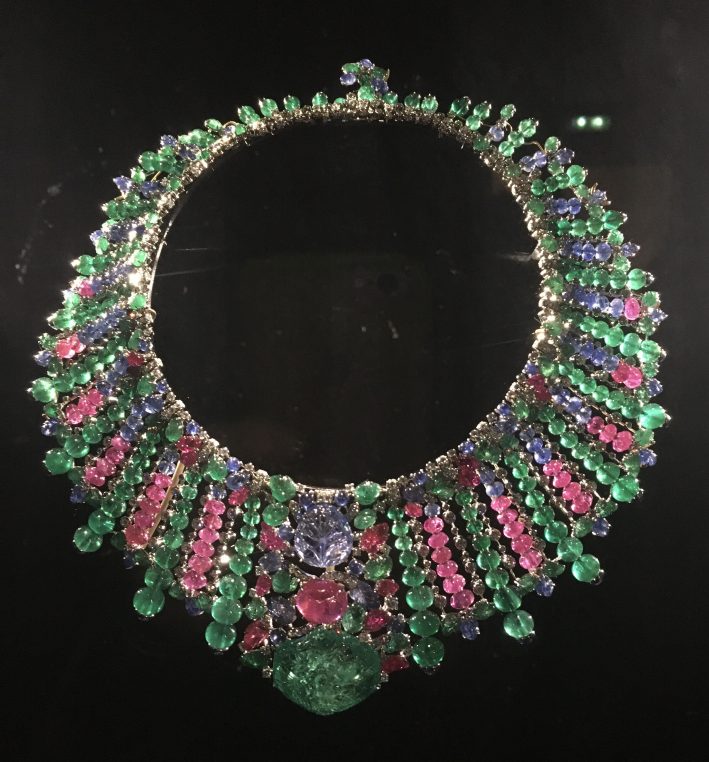 Last but not least is the “Cartier and the Arts of Islam” exhibition at MAD. It includes many drawings and special orders from the 1920’s, numerous tiaras and exceptional necklaces, and in the Grande Nef you can see huge photographs detailing the stones. (MAD, Until February 20)