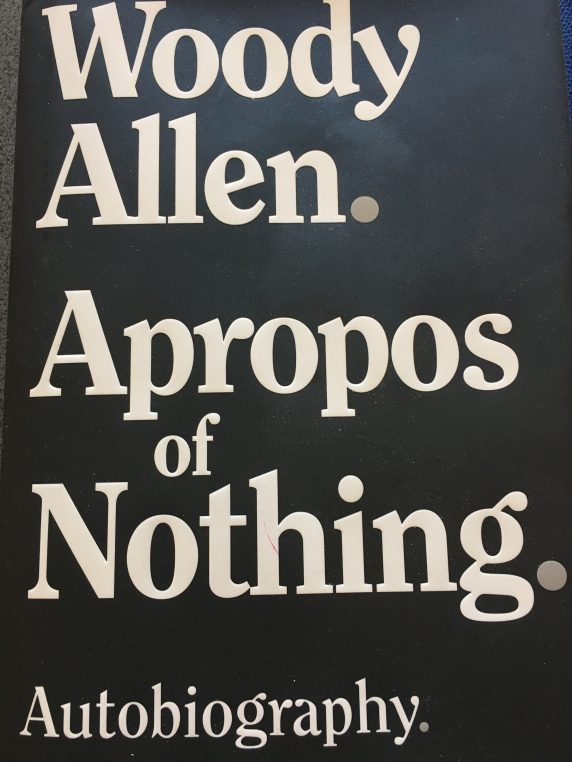 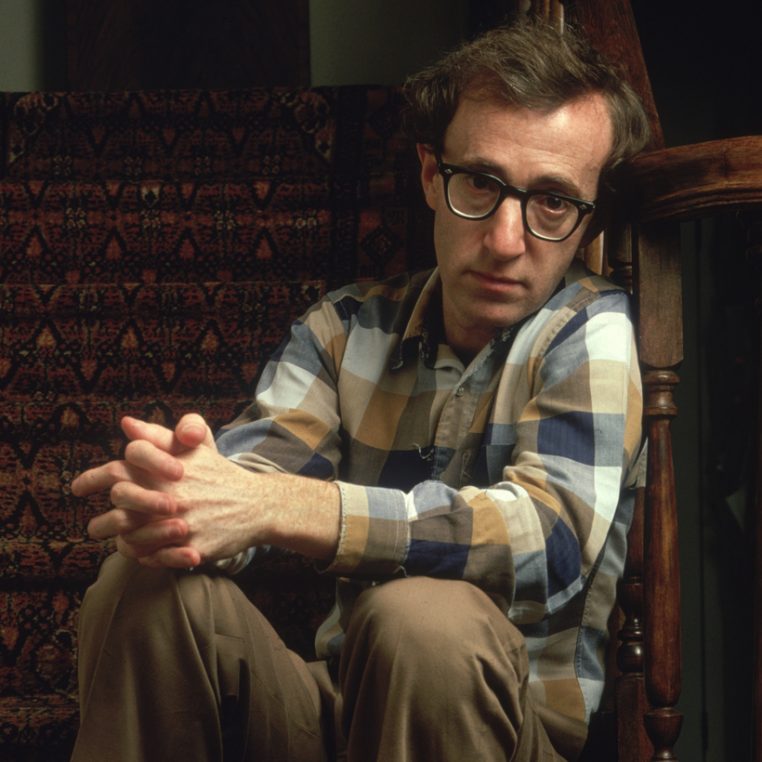 Woody Allen some time ago in Annie Hall

“Apropos of Nothing” is the title of Woody Allen’s autobiography published on March 18 th in the US by  Jeanette Seaver at Arcade books.  In French it is translated as “Soit dit en passant” and  will come out on June 3 rd at Editions Stock, an Hachette imprint. Both titles make the book sound like a modest account of a very extraordinary life as a writer, an actor and a director. Yet what struck me the most in this book is the hilarious language and the unique words Woody Allen uses. It will be very difficult task for any translator to render his style. The first hundred pages are the most fascinating, with the description of his childhood and apprenticeship of working life. There is a very precise account of all the great men who inspired him and helped him in his career including a number of directors of photography. 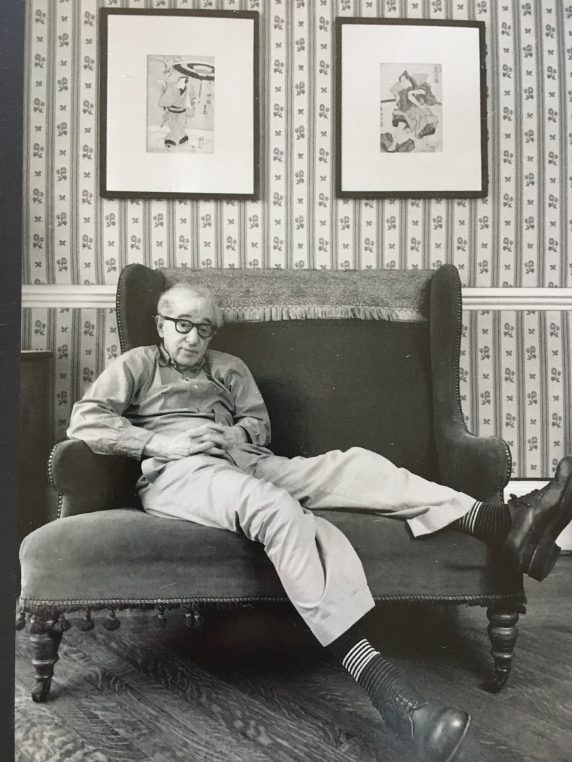 It took six weeks for the book to come by express post from California so you can imagine how happy I was to finally read it… and I have to admit that my English vocabulary has extended by at least a hundred words in the process. I literally had to use the dictionary a number of times, like for cynosure or mishugana. The cover is done in the same characters as all of Woody’s films, white on black, very simple.

After stating that his mother had five sisters, and that his childhood was spent surrounded by attentive women who spoiled him, that he was given an I.Q. test at five which prompted a recommendation to go to Hunter College special school for sharp kids but his mother couldn’t be bothered… he ended up at PS 99, Woody goes on talking about his father who was always busy with odd jobs: “Dad played the numbers every single day, rain or shine. It was the closest thing in his life to religious observance”.  “My grandfather somehow helped my father buy a failing grocery store on Flatbush Avenue and with some careful planning and hard work, my father managed to double its losses over time…” But he fought in WW2 and even sank in the Atlantic.

“Some people see the glass half full…, I always saw the coffin half full…” is one of the sentences he uses for illustrating his early fear of death. It was his older cousin Rita who introduced him to movies at a very young age, and in Flushing, movie houses were the only air conditioned rooms in the summer so they spent a lot of time there.

Learning his magic tricks got him his first job on stage, the discovery of jazz at 15, the first failed dates with girls much too sophisticated for him who discussed famous writers, his dislike for school which he missed most days… lead to his early career writing gigs every day at 1 pm on Madison Avenue.

When he started the New York university film program, he failed all his classes and was even thrown out of the summer school. But by then he was working and earning (three times his parents’ salary) as a comedy writer and was at 18, considered as the neighborhood wunderkind. What is really touching is the number of times he refers to how much he was loved and pampered as a kid even though money was a daily issue at home.

The big break was when a sleazy agent, Harvey Metlzer, who knew someone at William Morris, found him a grant at the NBC writer development program. Then came the first wife Harlene: “I knew I was in trouble when in one philosophical discussion, Harlene proved I didn’t exist”.

Follows the beautiful and manic depressive second wife Louise Lasser, hilarious scenes of rushing to the hospital in the middle of the night, etc. And after a hundred pages, we meet Jack Rollins who with Charlie Joffe was his producer until he died at 100. He had a high ceiling office on 57 th street and smoked the cigar as I remember. Woody describes him extensively as “having made a gigantic contribution to his career”. He was only a writer then, but Rollins had discovered the comedian in him.

His friendship with Jean and John Doumanian is described, and his very close and long relationship with Jean. Then the fall out on business matters which traumatized him and her also, probably. This is one of the dramatic passages of the book with of course the Mia Farrow ordeal. There are also many fun images like him flying with Rudolf Nureev and Margot Fonteyn, on a huge private plane from Paris to Washington D.C. for a special performance evening at the White House for Lyndon Johnson. Or the big poker games that made him rich while he was shooting “Casino royal” in London. His visits to the Hugh Hefner mansion in Chicago where you could have breakfast at any time of the day…

Diane Keaton appears on page 171 and again their friendly and fun relationship is a sweet moment of the book. It corresponds with him moving into his lovely duplex penthouse on Fifth.

I will pass quickly on the “Daddy in the Attic” song composed by Dory Previn (André Previn’s wife at the time Mia stole him away) which would lead to the fabrication of the Dylan Farrow story. We learn that Mia slept in the nude with their 11 year old son Satchel  (now called Ronan) and we get the love story with SoonYi which has lasted 25 years. And there again there are moving moments when he relates one of her remarks: “My whole life, I’ve never been anyone’s top priority” (page 321). 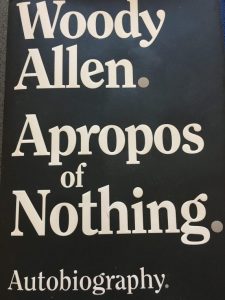 There are many technical details on casting his actors with Juliet Taylor, and exchanging Kate Winslet (who let him down on “Match point”) with Scarlett Johanssen whose career started then. She formed a stunning couple with Jonathan Rhys Meyers. “It was one of the only films that exceeded my ambitions” says Woody of it. Barcelona where he shot “Vicky Cristina Barcelona” was a great moment in his life as was San Sebastian last summer when he shot “Rifkin’s Festival” which is due out this fall.

“In fifty years of making films, working with hundreds of actresses, I’ve provided 106 leading female roles with sixty-two award nominations for the actresses, and never a single hint of impropriety with any one of them. Or any of the extras. ” The strongest article on Woody’s behalf was written by Moses Farrow, his adopted son with Mia and it is fascinating. And when you hear that Hillary Clinton refused Woody and Soon Yi’s contribution to her campaign, you laugh!

Yesterday Ben Smith contributed a major article in the New York Times questioning the accurateness of Ronan Farrows’s investigating methods. Soon, everyone will know how false the accusations against Woody were, and actors will beg to be in his films again. But the last twenty five years have been pretty tough and this book sets things straight.  “Work keeps me from facing the world, one of my least favorite venues” comes at the end of the book. Yet, Woody never sounds bitter.

“Apropos of Nothing”, Arcade Books and “Soit dit en passant” Stock on June 3.