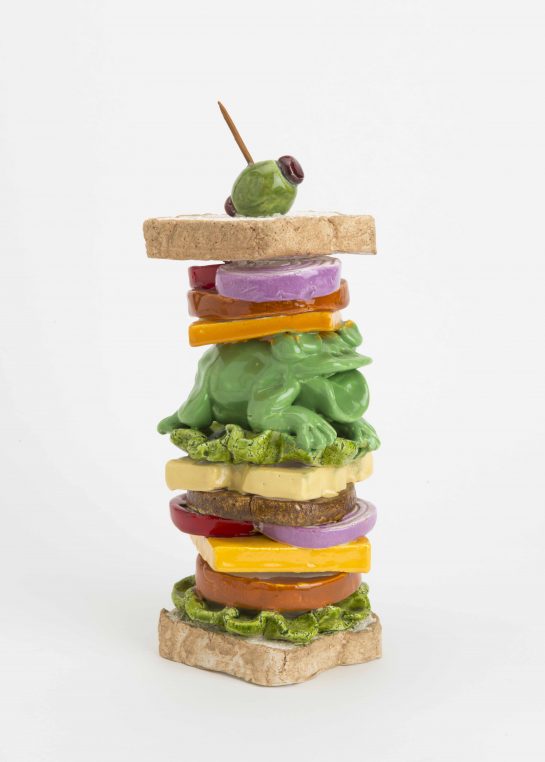 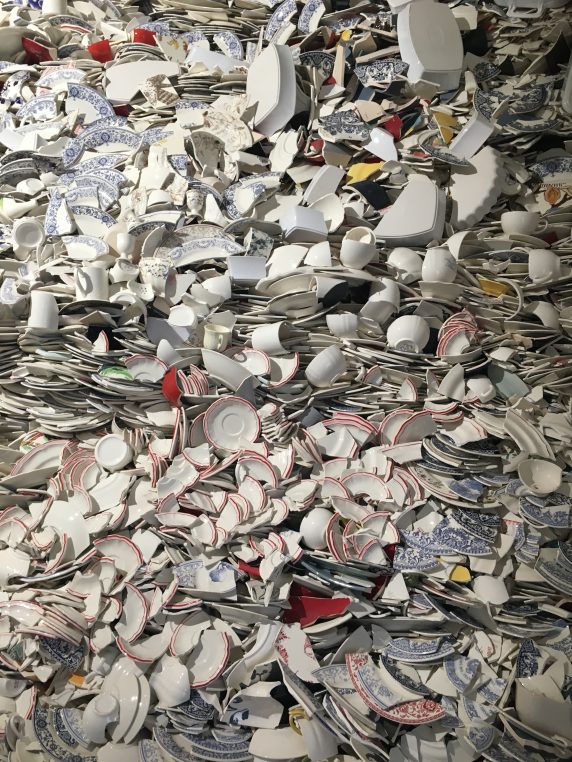 “Les Flammes” is the title of the new ceramics exhibition at Musée d’art moderne de la Ville de Paris, MAM, which is huge and very varied and puts the focus on the different techniques and types of earth. Taming the temperature (up to 1 400°) and size of the fire is a key element, thus the title Flames given to this “Age of Ceramics” show which includes Bernard de Palissy, Picasso, Joseph Kossuth, Edmund de Waal and Ancient Greek or vernacular works. Techniques, Uses and Messages are the three themes and videos as well as photographs illustrate the technical process. With the Anni and Josef Albers exhibition bison downstairs, it makes MAM one of the most interesting museums to visit this month. 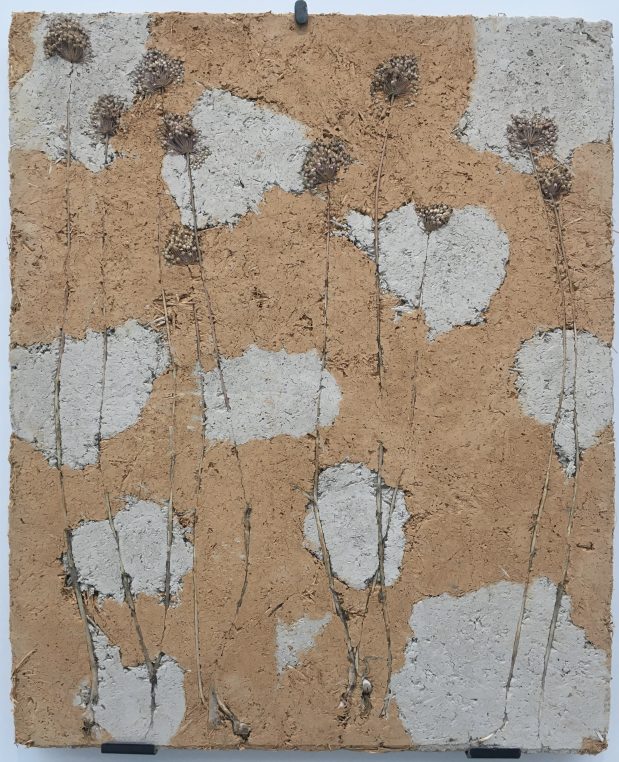 I recognized a number of pieces from Gien in the first work of the show which welcomes the visitor at the top of the stairs. A large installation of broken faience created by British artist Clare Twomey had been made first in 2009 in England, with scraps from the Johnson Tiles factory. It examines the use value of different tableware parts and raises questions of overconsumption and recycling. The Japanese artist Natsuko Uchino, has created a “painting” in clay, sand and straw. She lives in Belvézet, France. The now famous potter Edmund de Waal (author of “The Hare with Amber Eyes”) who is exhibited at the Jewish Museum in New York and at Musée Camondo (but there you can’t see his pieces which are very badly set), has a clever shelf with 72 tiny porcelain cups lent by Galerie Max Hetzler in Berlin. 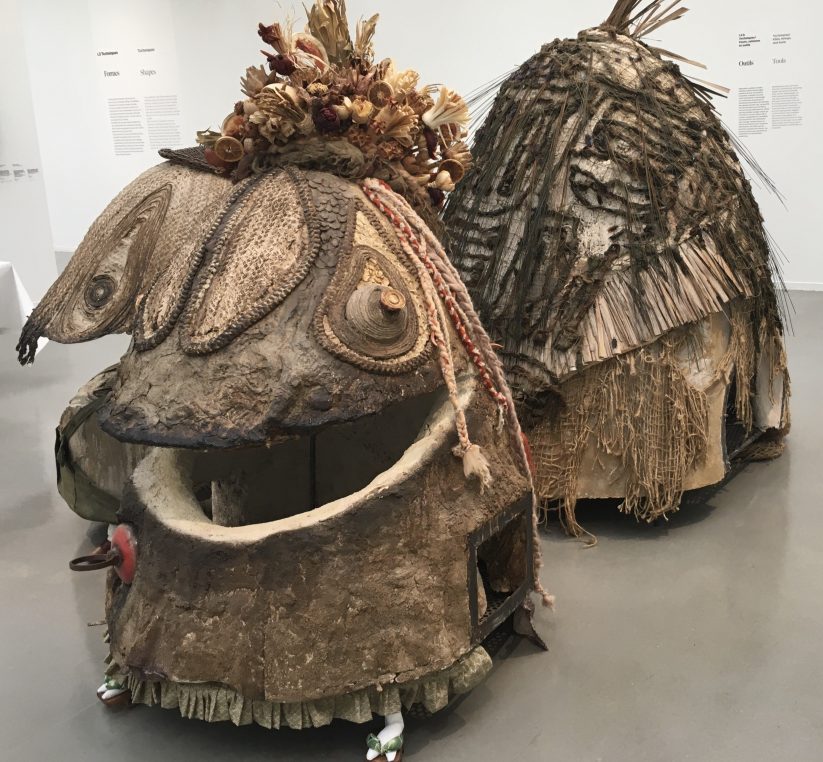 These extraordinary kilns built by Roberto Cuoghi in Greece for his retrospective in 2016, were humanized and made to stare at the other sculptures in the exhibition after he fired hundreds of ceramics crabs and claws in the kiln which reached 1200°. Francine Del Pierre settled in Vallauris between 1948 ad 1952 and favored the clay colling technique (colombine in French). Her simple pieces are inspired by Asia and celadon glaze. Enzo Mari also uses the colling technique and made this amazing plate in “four quarters” which comes from MAD, Musée des Arts Décoratifs.

There are some huge pieces like the Fountain by Nicole Giroux or the Mnemiopsis Leidyi no 1825 by Bente Skjøttgaard or Lawson Oyekan’s Undivided body. And some tiny ones like Laureline Galliot‘s multicolor teapot printed in 3D or Martine Damas’ V27- Midnight Green, Apple-yellow, Pink, 2009. Suddenly a “Still Life”  by Giorgio Morandi appears in the show and seems so obvious! I have to admit I liked Kader Attia‘s “Separated together” mural, made of traditional green tiles held together by staples. 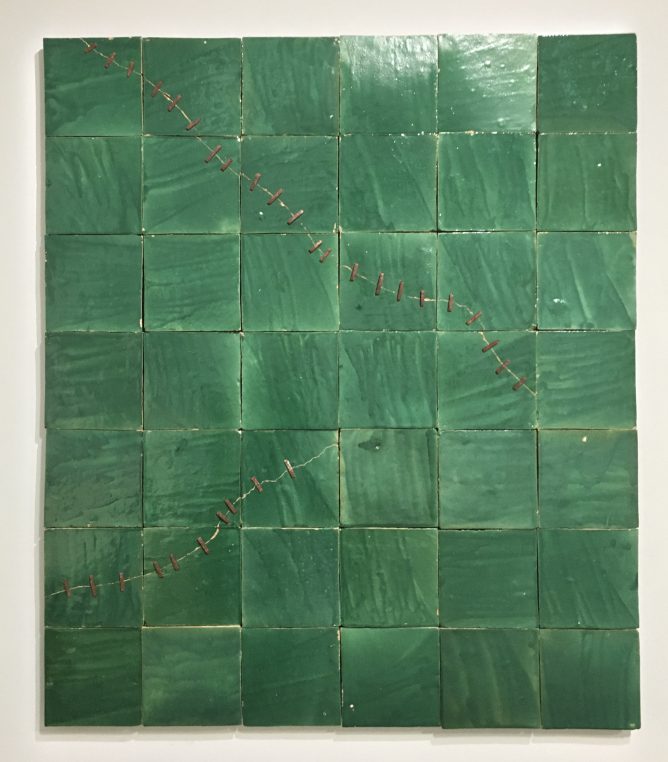 There are many Japanese artists of course and the last part of the exhibition is devoted to trompe -l’oeil, paintings on porcelain and special decors. A pop ceramics garbage can filled with empty cokes and other drinks by Kimiyo Mishima, “Leda and the Swan” by Caroline Smit, a “Cube skull teapot” by Richard Notkin are all fun to discover as is Grayson Perry’s “Transvestite Looking in Mirror” in enameled faience. 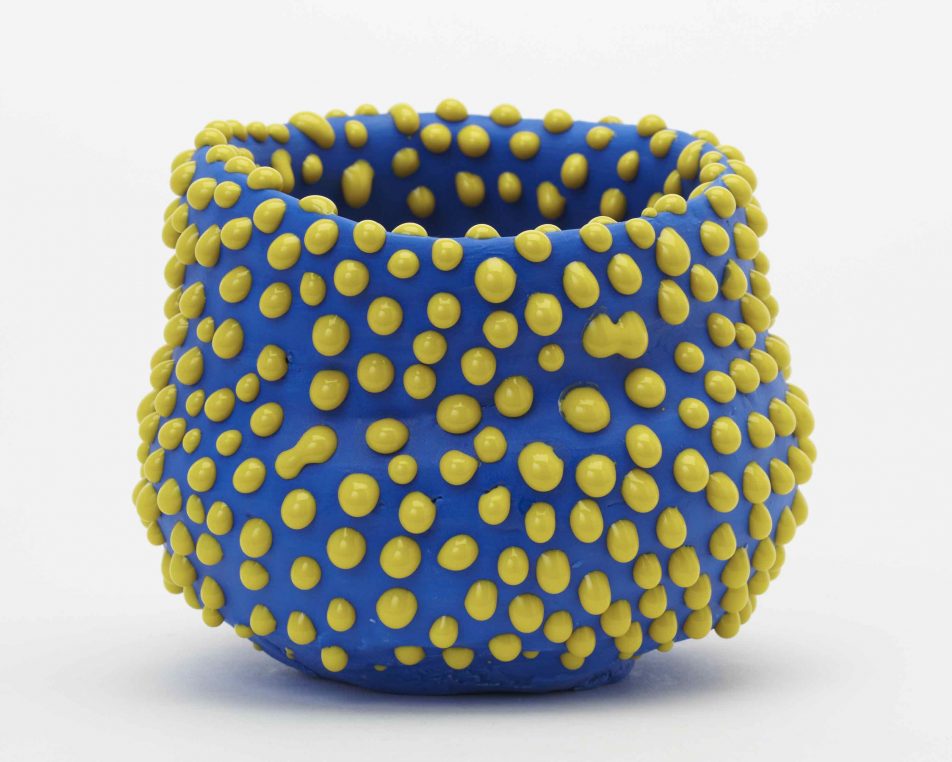 “Les Flammes” curated by Anne Dressen with Natsuko Uchino is on until February 6 at MAM. Don’t miss the Anni and Josef Albers exhibition if you have not seen it and in the downstairs galleries, a series of 100 drawings and collages by Joseph Beuys (1921-1986) are lent by his family. The German artist made over 10 000 drawings, exploration or sketches for installations or just notes. Here, organic materials and vegetal such as leaves are associated to pencil and watercolor. (Until March 27)

2 Comments on “Ceramics and Joseph Beuys at MAM, and still Josef Albers of course”