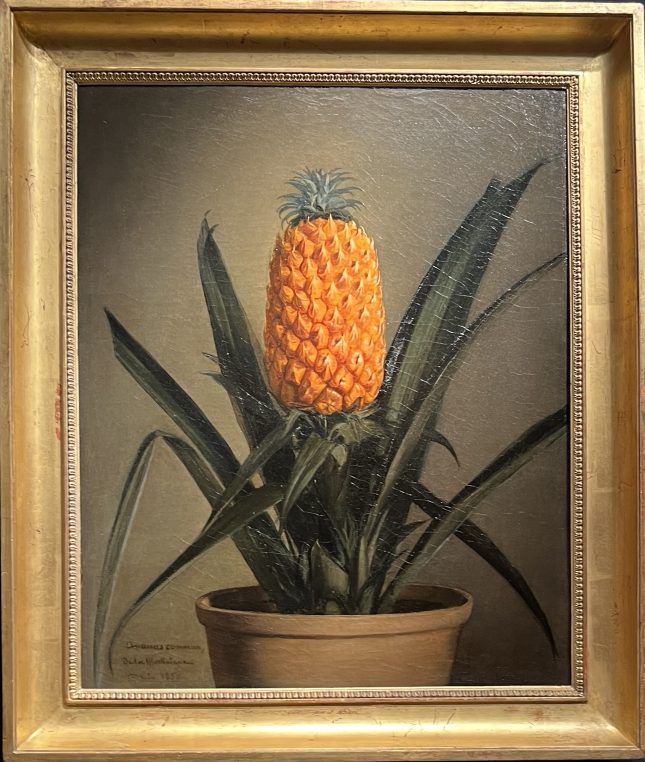 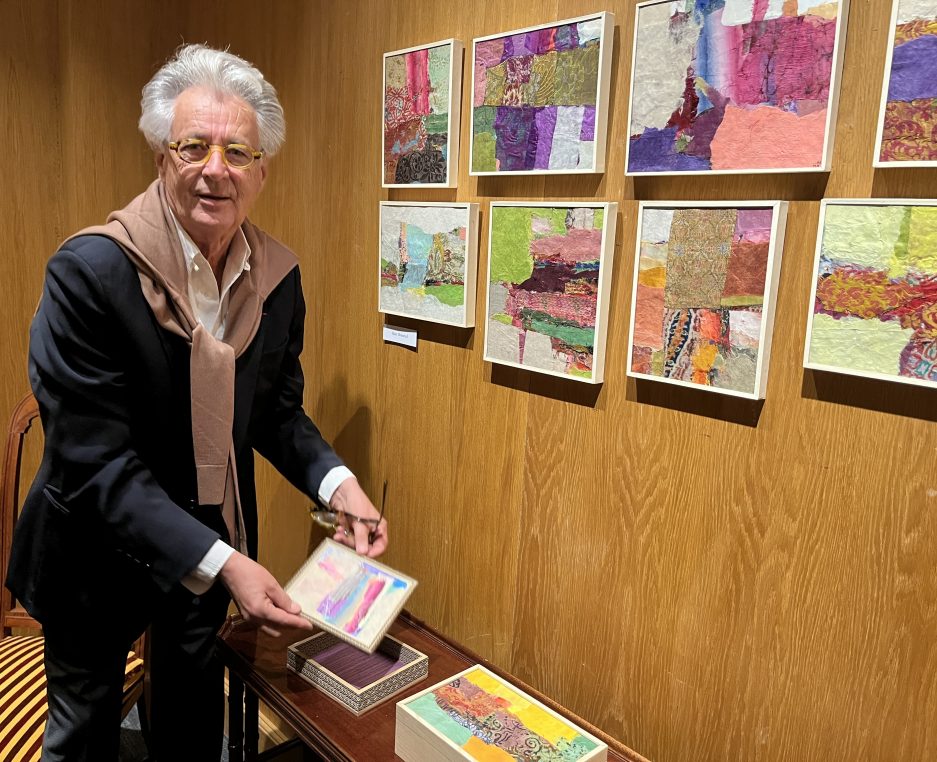 I was very happy at the prospect of seeing Marc Boisseuil‘s new boxes at Pierre Passebon‘s and when I spotted a huge crowd in galerie Vero Dodat, I was a bit surprised… Well there were two openings at the same time and the other one was of actress Isabelle Adjani‘s dresses in her period films like La Reine Margot and Marie Stuart. The drawings and pictures were very pretty but I personally fell for the boxes made of straw and covered in patchworks of old textiles. A super refined Christmas present for your Fifth avenue coffee table. 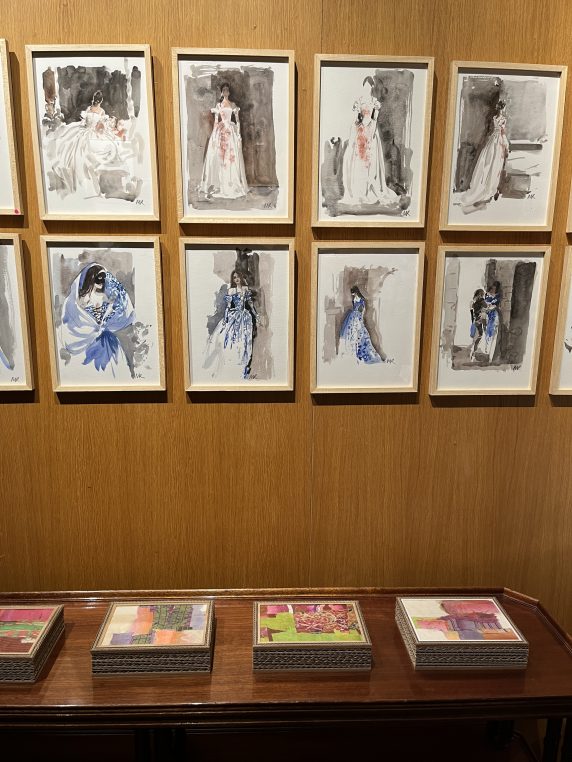 Marc Boisseuil has always made collages and last time he exhibited was at Marie Victoire Poliakoff’s gallery on rue de Seine. The evening ended at Café de l’Epoque which has remained a true bistrot de quartier. (Until December at Galerie du Passage)

I could not attend Lin Utzon’s inauguration in Copenhagen but since I received wonderful pictures of her dancing sculptures, I thought I would share them with you. This artist and designer who is so talented at creating plates and coffee cups with Royal Copenhagen for the Queen of Denmark’s Andersen collection, has made several large sculptures in Mallorca where she has her studio and in Denmark. 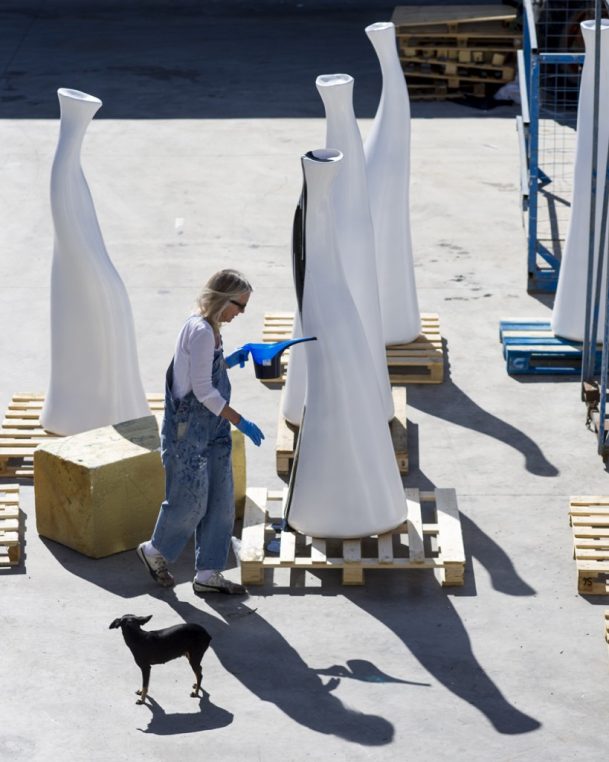 She was inaugurating a “Cosmic Dance” installation of her sculptures in the harbor of Copenhagen with young dancers dressed in costumes designed by her. She has a long past of designing clothes for the Danish ballet and for the priests of a church designed by her father Jørn Utzon. The group of giant sculptures was first shown in Venice at Fondazione Giorgio Cini, in May 2016 during the Biennale, and they have now been installed permanently in the city of Copenhagen. 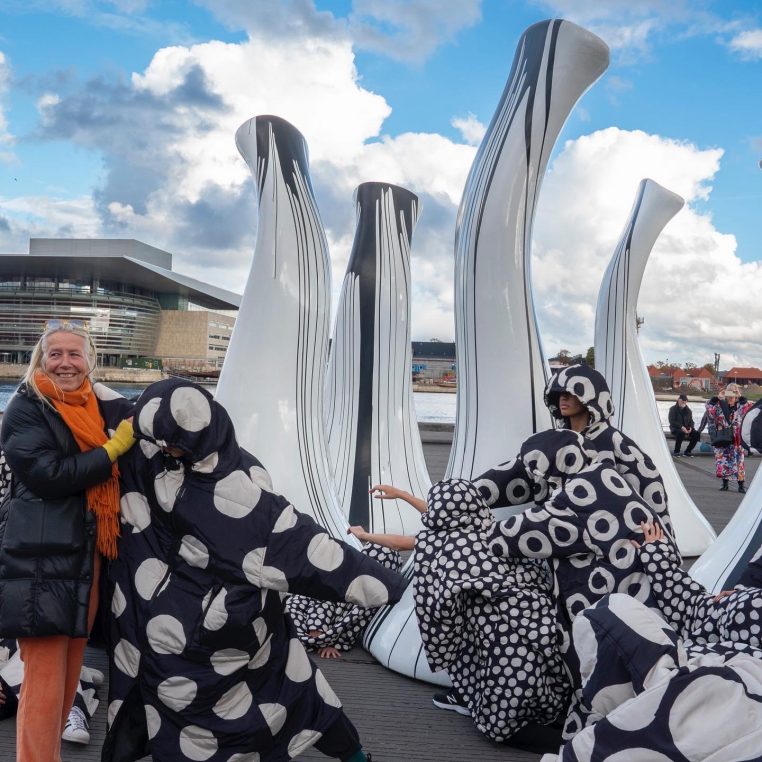 Lin Utzon, “Cosmic dance”, with dancers on Ofelia Plads, in the harbour of Copenhagen, on September 29

Paris Fine Arts was for the first time associated with the Paris Biennale and there were enough variety in the booths to make it a fun visit. I spent a long time on the Lurçat stand dedicated to the house-studio designed by his brother André in the Villa Seurat in teh 14 th arrondissement, where the genius tapestry artist Jean Lurçat lived. It is being restored at the moment by Académie des Beaux Arts and “Le Palais du Prince” a large 1954 tapestry with a black  background was shown  as well as different photographs of the very avant-garde 1925 house. 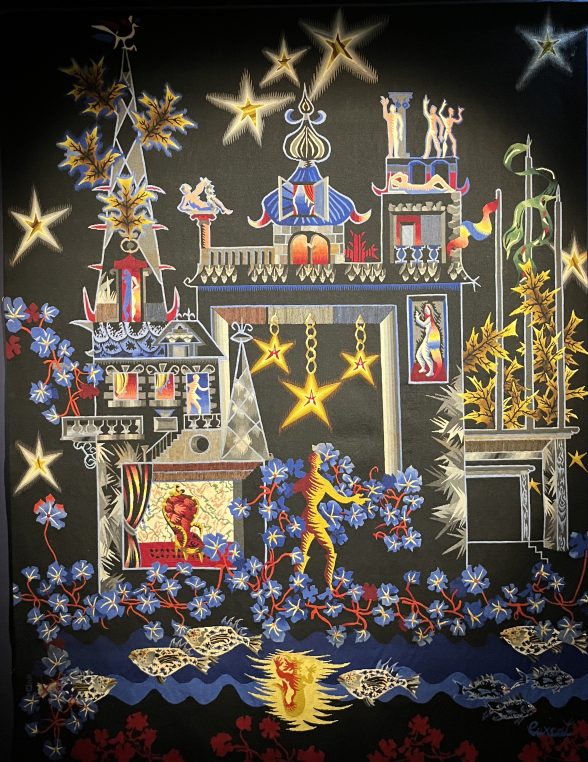 I loved a series of landscapes including a nocturnal one with a lake by Swedish painter Oscar Bergman in 1918 at Galerie Michel Descours and was amused to see a painting by Hyeronymus Francken II,  “The wealth of the miser and his death” identical to the one exhibited at the Louvre in the “Les Choses” exhibition. How strange! At Didier Aaron, I spotted an “American cougar” painted in 1811 by Nicolas Huet live at the Museum of Natural history. I had no idea that it was like a leopard and I laughed when I thought of its meaning today. 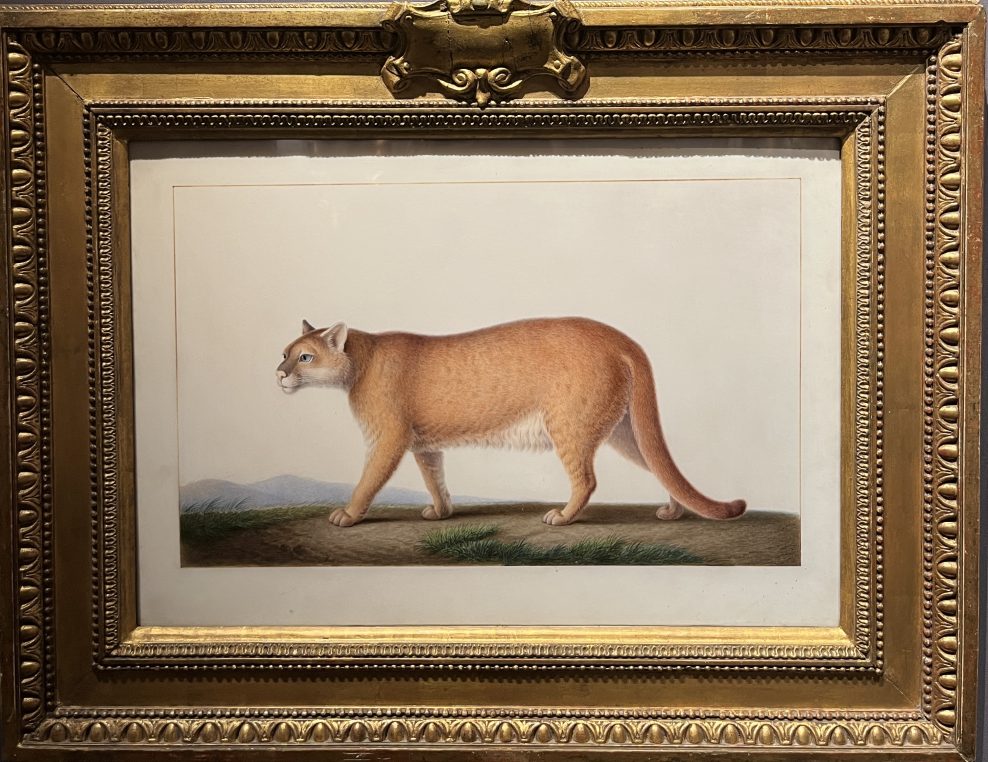 The detail of a painting by Jean Baptiste Oudry at Talabardon & Gautier was wonderful. I bothered the charming young man on the stand and asked him why the deer in the painting had a gold necklace. And he took the time to explain the themes of Hippomène and Atalanta. In the same gallery, a still life à la Venus de Milo precious tableby Blaise-Alexandre Desgoffe representing a precious table was superb. They also had a fun  “Prince Alessandro Torlonias’s pineapple”, 1850, which reminded me of then by Oudry in Versailles. 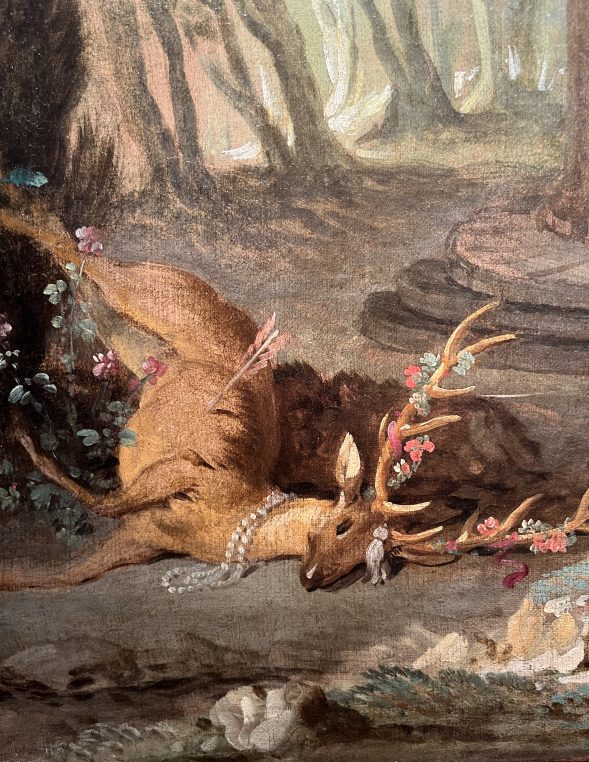 Galerie Chevalier was showing extraordinary tapestries and carpets and there were a few jewelers and rare silver merchants. But the atmosphere was less International than usual and everyone seemed very calm, whispered, and the silence due to the thick carpeting was striking. 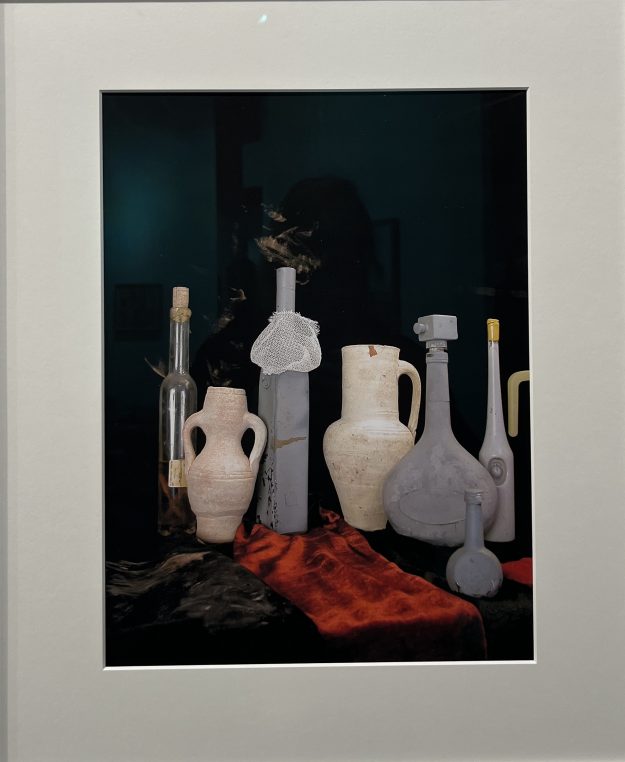 At Paris Photo, the alleys were bustling and I was happy to discover late (2004) pictures by Jan Groover at Klemm’s gallery, Berlin, which are very different from those shown at Fondation HCB.

Patrick Faigenbaum‘s lemons at Nathalie Obadia were beautiful and Agnès Varda‘s black and white still lives very surprising and beautiful. Finnish photographer Elina Brotherus‘ was a discovery at Martin Asbaek gallery in Copenhagen where the light of the North always fascinates me. 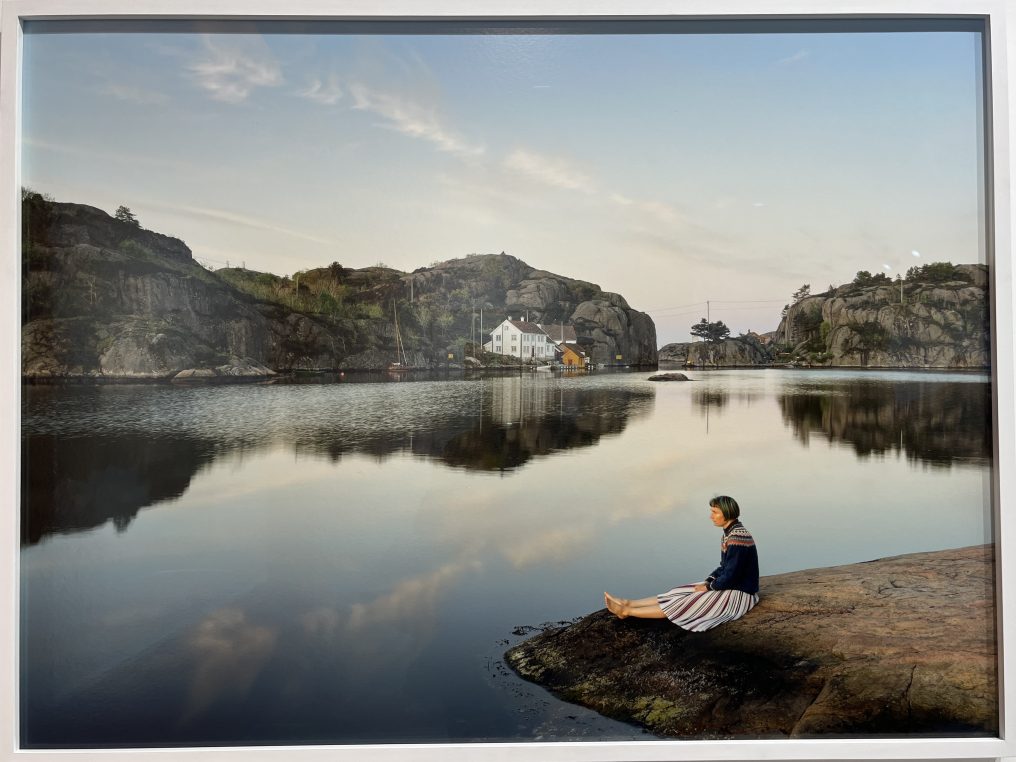 At Patricia Conde, Mexico City, Alejandro Cartagena had a whole wall of Mexican trucks with “carpoolers” and machinery lying in the back of the pick up. They are photographed from above and make quite a fun image. At Christian Brest Art Brut in Paris, cuban artist Jorge Alberto Cadi (b. 1963) is full of self mockery and social criticism as well as allusions to our mortal condition. 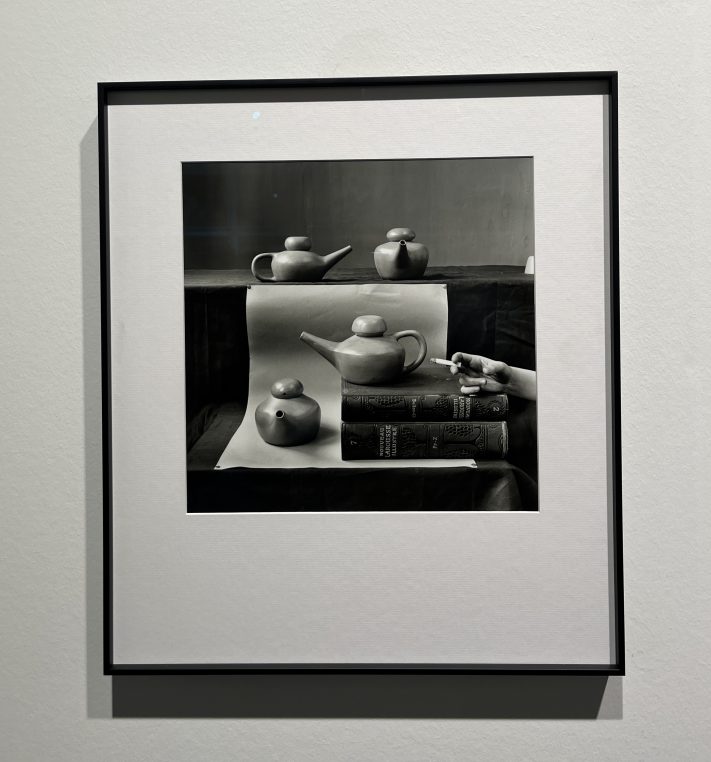